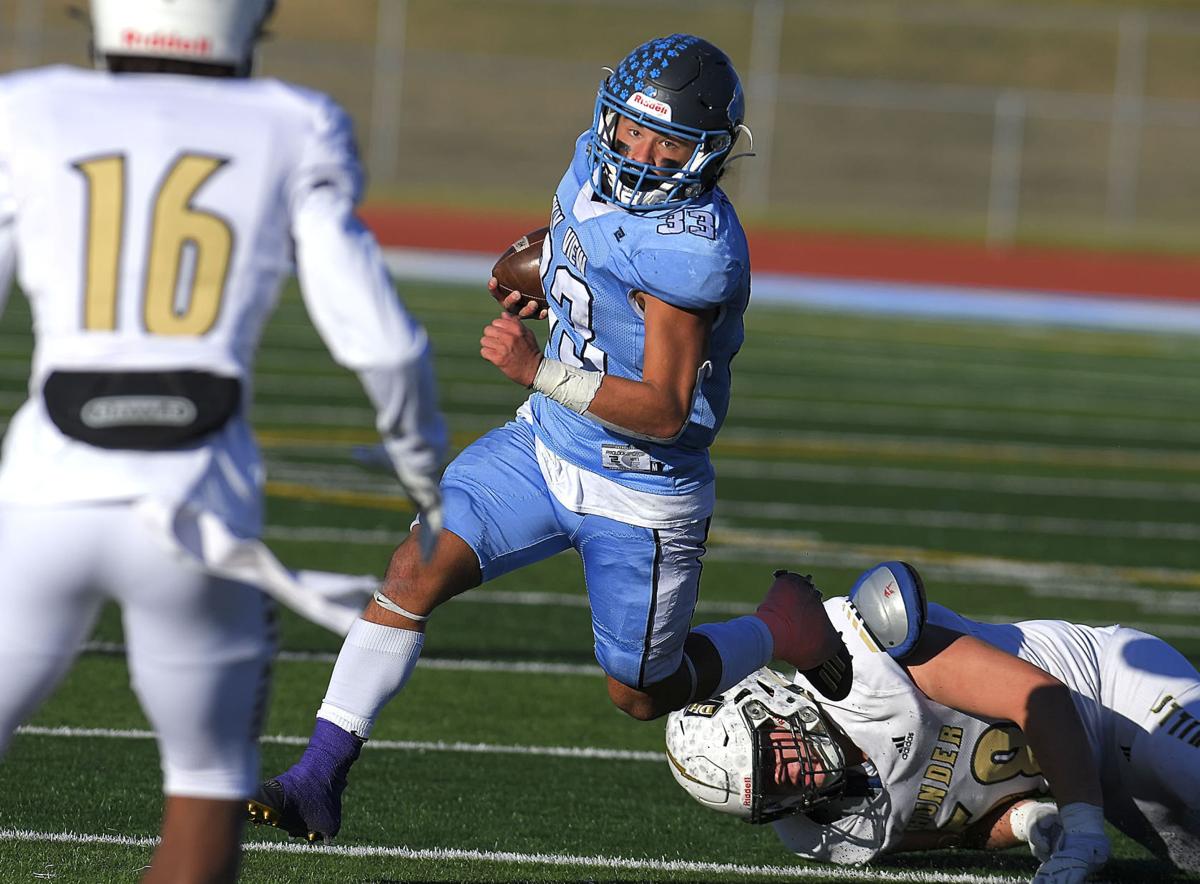 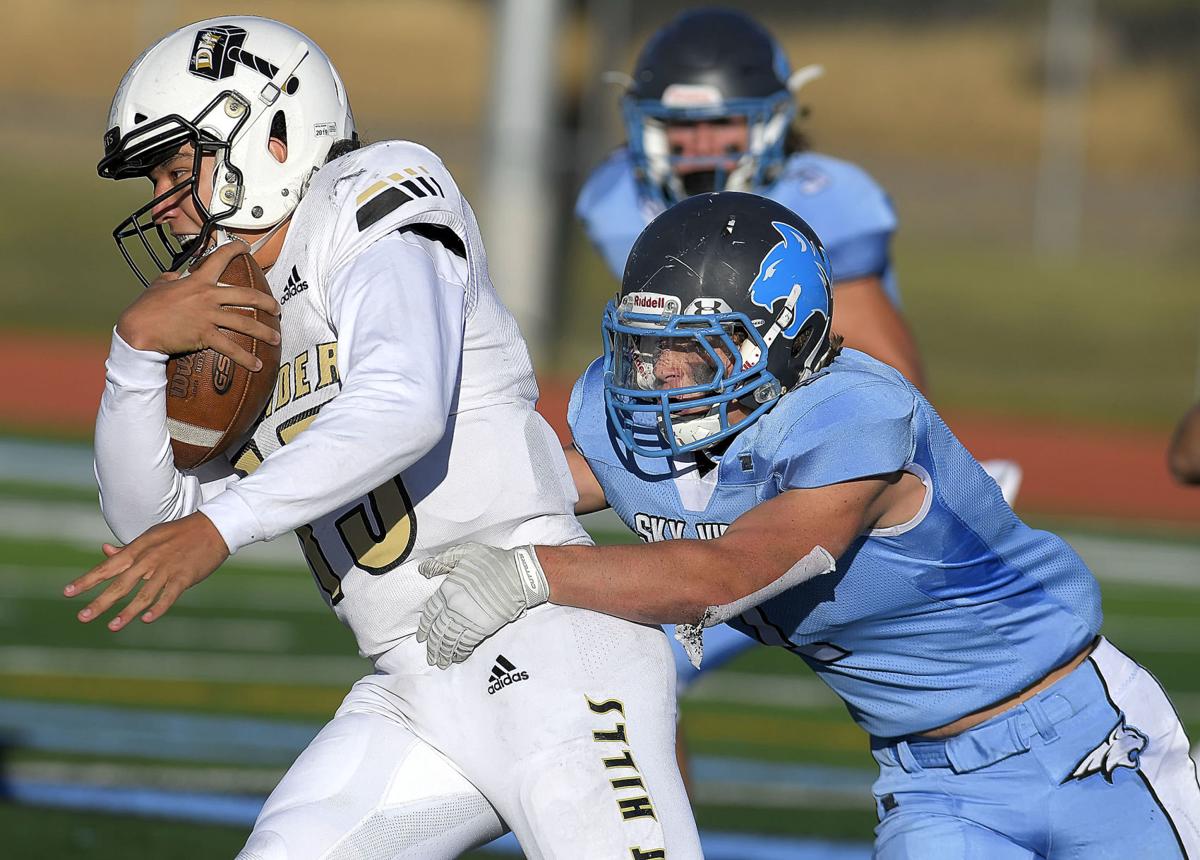 SMITHFIELD — They needed a bit of a wake-up call, and Desert Hills provided that in the early going Friday afternoon.

In the end, the Bobcats flexed and showed why they are the top seed in the 4A football state playoffs. Defending state champion Sky View overcame three turnovers in beating the Thunder, 42-12, advancing to the quarterfinals.

“I did not like our demeanor in the first half at all,” Bobcat head coach Christopher Howell said. “I felt like we were taking some things for granted, maybe thinking they (Thunder) were not going to play hard. We’ve been preaching all week that they play the best teams the best. They deserve a lot of credit for doing what they did in the first half, slowing us down and making us make mistakes.”

After the slow start, Sky View (10-0) did score 39 unanswered points to take control and cruise to its 23rd straight win, dating back to last season. Quarterback Kason Carlsen passed for 244 yards on 16 of 35 attempts and four touchdowns.

“We woke up in the second half,” Carlsen said. “We went in at halftime, and coach told us we were not playing our best and we needed to step it up. This could have been our last game.”

In the first half several times Bobcat receivers got beyond the Thunder secondary, but passes were either a bit overthrown or receivers couldn’t quite haul them in. That changed at halftime.

“We haven’t played a game in about 20 days, so you expect a little rust,” said Carlsen, who three for two of his TDs in the third. “A little bit of that is me. I need to put the ball where it can be caught. Our O-line did good throughout the whole game.”

Sky View certainly started the second half with more purpose on offense, and it showed.

“I’m really proud of how we rebounded in the second half,” Howell said. “I felt like we played much better. ... These guys needed a wake-up call and we tried to give them that a little at halftime. I felt like they came out and responded. We ran the ball, finished drives, finished blocks.”

Bobcat running back Walter Collins finished with 111 yards on the ground on just 13 carries and a TD. The senior also caught three passes for 82 yards and another score. Isaac Larsen hauled in three passes for a team-high 83 yards and a TD, while Samuel Thatcher caught four balls for 23 yards and two scores.

“He (Thatcher) runs really nice, clean routes,” Carlsen said. “When all of our receivers run clean routes, it sets someone up to be open. It takes all four guys to get one open, and then it is my job to get it to them.”

Defensively, the Bobcats gave up a big play in the first quarter for a score and then a late touchdown when mostly the junior varsity was playing. Hunter Lewis led Sky View with 13 tackles, blocked an extra point and a field goal attempt and came up with an interception that he nearly returned for a TD. Dee Wilde also had double digits in stops with 10.

Offensively, Sky View began the game with a punt, a lost fumble, an interception of a pass that glanced off a Bobcat receiver’s hands in the end zone and then a punt to end the first quarter.

After the pick in the end zone, the Thunder (5-7) got a big pass play. Hendrick Lusk hauled in a pass from Noah Fuailetolo and was gone for a 69-yard TD late in the opening quarter. The extra point was missed

“We played great defensively in the first half, with the exception of one play, and that’s my fault for putting a kid in a position that was a really hard spot to be in,” Howell said.

Sky View dented the scoredboad with 5:40 left in the first half. After converting a fourth-and-6 earlier on the drive, the Bobcats went for it on fourth-and-5 from the 8. Carlsen found Thatcher for the TD. Kasen Erickson booted the extra point, and the hosts were in front, where they would stay.

Late in the second quarter Bracken Schumann recovered a fumble for Sky View near midfield. Seven plays later Carlsen hit Larsen for a 6-yard score. Larsen ran in the 2-point try, and the Bobcats took a 15-6 lead into the break.

Sky View received the ball to start the second half, and it took just two plays to score. Collins started east and cut back and came across to the west side of the field. Carlsen threw a big block and the Bobcat running back was gone for a 67-yard TD.

“Our coaches preach effort from one through 11 guys on the field,” Carlsen said. “I saw Walter coming back and thought, I’m not doing anything so I might as well run down there and block and help the team out. ... We feed off each other.”

“He (Carlsen) is a big-time team guy,” Howell said. “I’m really proud of him and his leadership for sure.”

A bad punt by the Thunder gave the hosts a short field on the ensuing possession. It took Sky View just three plays to go 35 yards to paydirt. Thatcher caught his second TD of the night, this time from five yards out.

Just before the end of the third quarter, Blake Bishop recovered a fumble giving the Bobcats the ball at midfield. On third-and-5, Collins caught a short pass and started running over defenders, juking others and got a big block from Larsen. Collins scored from 45 yards out, and Sky View took a 36-6 lead into the final quarter.

Erickson booted field goals from 23 and 27 yards, respectively, in the fourth quarter. The first was set up by a 30-yard interception return by Lewis. The second came after the JV offense drove down to the 8-yard line.

“It’s win or go home now, especially for us seniors,” Carlsen said. “We have been in this spot before. It’s just one week at a time.”

“It doesn’t matter who we play, because everyone is good,” Howell said. “What I do care about is we are turning the ball over too much. You play a really good team and turn the ball over, you will lose.”

Before the National Anthem, there was a moment of silence for long-time equipment manager Bud Covington, who recently passed away.

The 14th-seeded Grizzlies (4-7) had a tough task traveling south to St. George to face the third-seeded Warriors (9-1).

But other than the second quarter, Logan hung with one of the best teams in 4A Friday. But that quarter did get away from the Grizzlies.

Snow Canyon scored four TDs in the second, taking a 28-0 lead into the break. Logan made it interesting with a pair of scores in the fourth, but the hosts were able to answer and put the game away.

Cooper Pond caught a slant pass from quarterback Kody Kirk for the first Grizzly TD. Kirk then found Gage Jenson for a two-point conversion. The second Logan score came through the air too, when Kirk hooked up with Jaylen Sargent. The Kirk to Jenson combination worked again for two.

“Our offense was on point, but we couldn’t find a way to score in the red zone,” Bowen said. “Defensively, we did a lot of really good things and got after them. I am proud of how our boys fought all year. For a team that was picked to finish last in region, this season was a success.”