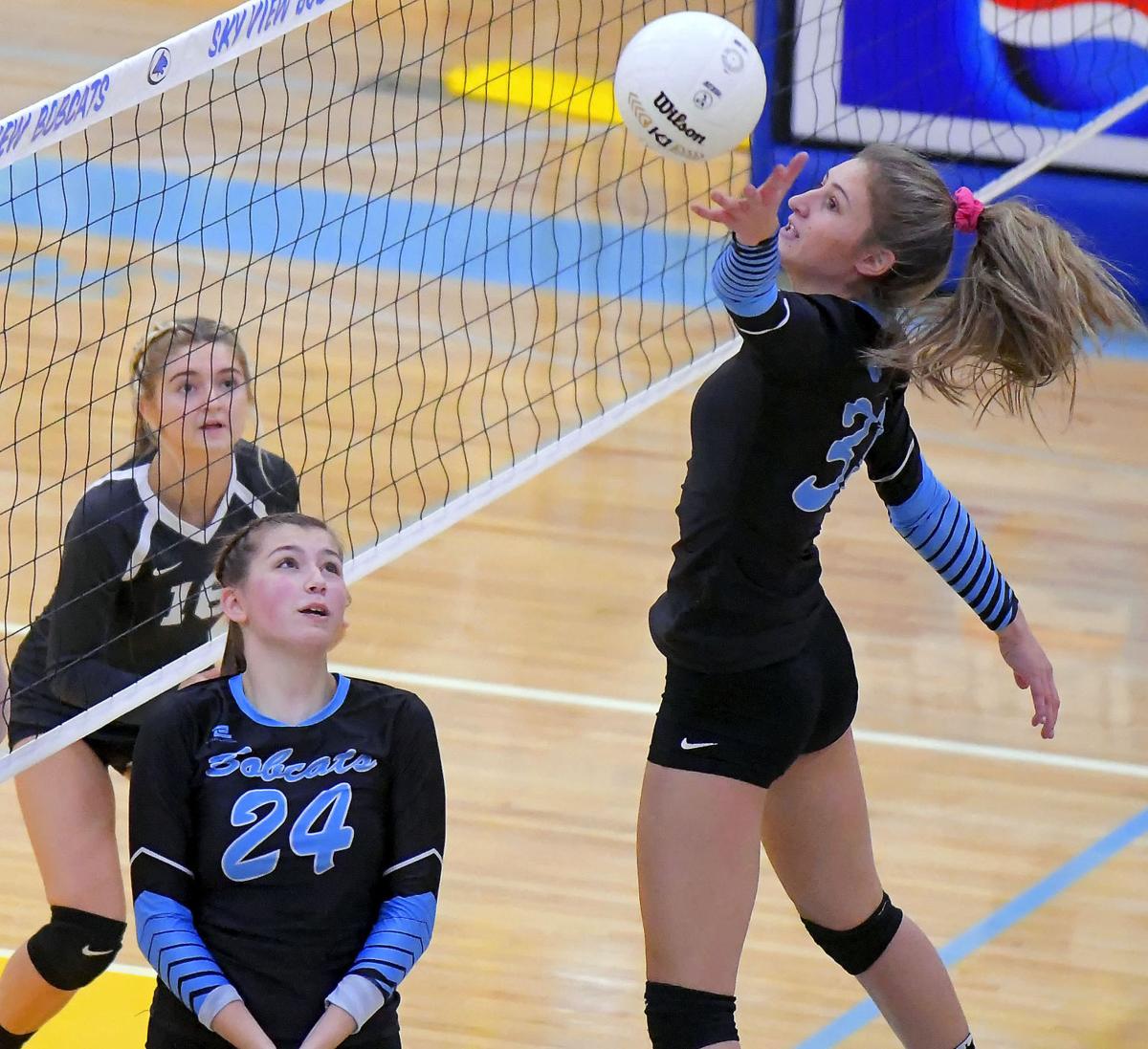 Sky View’s Kaitlyn Hiatt (24) watches as Kaytlin Smart reaches out for the ball on Saturday in Smitfhield in a state tournament match against Pine View. The Bobcats advance to the state quarterfinals. 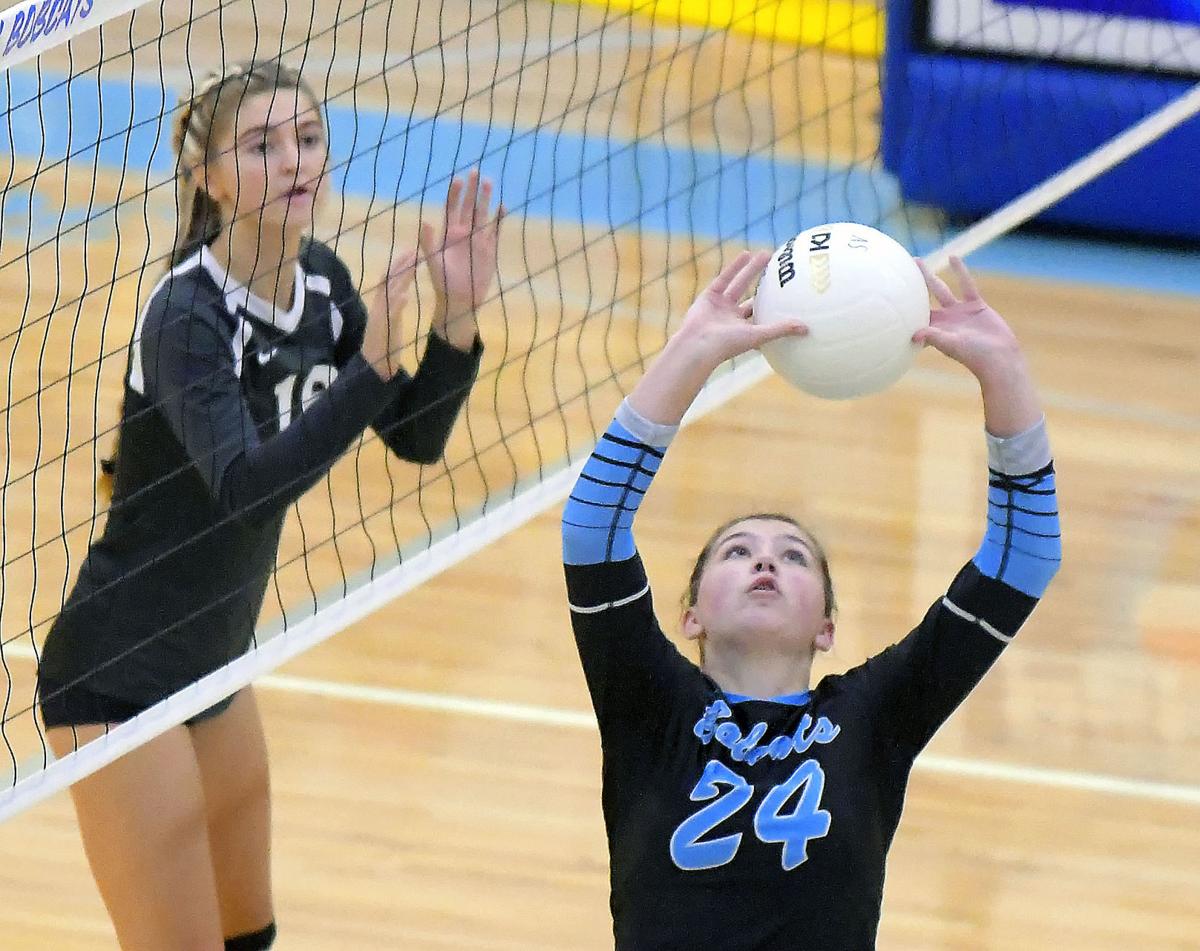 Sky View’s Kaitlyn Hiatt (24) watches as Kaytlin Smart reaches out for the ball on Saturday in Smitfhield in a state tournament match against Pine View. The Bobcats advance to the state quarterfinals.

So is Ridgeline, Mountain Crest and Green Canyon.

On the first day of action in the 4A State Volleyball Championships, Region 11 teams proved they are to be reckoned with. The Bobcats, Riverhawks and Mustangs got to host matches Saturday and advanced to the quarterfinals. The Wolves had to go on the road, as did Logan. Green Canyon won two matches to move on. Logan fell in a thrilling five setter.

“We have a great region, and it really prepares you for state,” SV head coach Sheila Sorensen said.

The quarterfinals, semifinals and championship will be contested next Tuesday and Wednesday in Richfield at the Sevier Valley Center.

“I thought it was okay to put some subs in,” Sorensen said. “My younger ones need some experience. They will be my varsity next year. I loss six seniors, so I need to get them in there some time. I trust them all, and I’m proud of them for fighting.”

Once again Sky View used a balanced attack to keep the Panthers off balance. Kaytlin Smart led the Bobcats with 11 kills, while Jenna Gibbons had nine finishers, Haley McUne had seven kills, Brinley Forsgren had six kills and Melanie Hiatt had five.

Smart had six blocks, followed by Kaitlyn Hiatt (5) and Gibbons (3) and Forsgren (2). Hiatt had 29 assists and eight digs. McUne led the Bobcats in digs with 15, Kelsey Spackman had 11 and Jenna Dority had eight.

The Bobcats also got libero Kelsey Spackman back from an injury. She had missed two weeks. She passed at 2.80.

“With Kelsey back, we could run almost anything,” Sorensen said. “We will take it a match at a time and hope she can continue to play. She is such a calming force back there.”

After four lead changes and four ties to start the match, Sky View went on a 7-1 run, sparked by a kill from Smart. Dority also served up an ace as the hosts built a 13-8 lead. Forsgren had a stretch of back-to-back kills and a block. Smart finished off the opening set with a kill.

A kill by McUne and then an ace from the senior got the Bobcats off to a good start in the second set. Smart went off during a 15-1 surge by Sky View. She had four straight kills and two blocks. The Bobcats took a 17-3 lead and never trailed in the second.

“I was just swinging fast and trusting my team,” Smart said.

Pine View was able to claw back with a 9-2 run. Sky View started using some reserve players. The Bobcats finished off the second with a block from Smart and Kaitlyn Hiatt. Smart had five kills and three blocks in the second.

“She (Smart) is really explosive,” Sorensen said. “She has grown in this game. She only started playing volleyball as a freshman. She is like a sponge and wants to learn. Kaytlin Smart is explosive and fun and fires our team up.

“I thought Brinley Forsgren did an amazing job. She had some great hits. … Our middles finally got the glory today because our passes were so good.”

Four kills by Smart helped Sky View build a 15-8 lead in the third. Once again the Panthers fought back when several Bobcat reserves came on. In fact, Pine View used a 6-0 run to take its first lead since early in the first set, 25-24.

But the Bobcats listened to their coach and kept battling. After a long rally, the Panthers hit a shot long. Gibbons had a tip kill, and McUne finished it off with her team-best fourth ace of the day.

“Hopefully we can go down to Richfield and take care of business,” Sorensen said. “This is a special group of girls. I think we will do well.”

“The girls did a great job coming in and getting things done in three sets,” RIdgeline head coach Jaicee Roden said. “We are still working on one ball and one set at a time. It was nice to get some nerves and wiggles out in that first set.”

Fans showed up and gave the Riverhawks a good boost.

“It was awesome to be on our home court,” Roden said. “It was nice to be playing in a familiar environment.”

“Ava Wilcox started out strong and finished strong,” Roden said. “Our middles did a good job in Sydney Donavan and Mira Smullin. Our setters distributed the ball well. Overall, we did a good job.”

Ridgeline will now face second-seeded Uintah (17-3) on Tuesday at 1 p.m.

“We are going to go to Richfield and have a lot of fun,” Roden said. “We are excited to compete.”

“We had a fun match today,” MC head coach Kindra Anderson said. “We started off kind of timid and lacking confidence but after the first set we decided to bring it and leave everything on the court. My girls played great together and worked very hard to get a win.”

Kiera Crosbie led the Mustangs with 15 kills, hitting .310. She also served up five of Mountain Crest’s 12 aces and had six digs.

“Kiera had some amazing kills that brought a lot of energy to our side,” Anderson said. “Ella (Douglass) had some big blocks that brought quite a bit of excitement. It was a total team effort with our back row players doing a great job of getting the ball to (setter) Jaycee (Osborne) and then Jaycee finding our hitters. I’m really proud of them, and it’s fun to see their hard work in practice pay off.”

Douglass had 12 kills and four blocks as she hit .286. Osborne had 30 assists, 10 digs and four aces. The Mustangs had 60 digs, led by Maddie Constantineau with 13. Gracie Garlock had 10, while Phoebe Starnes had 11 and Sadie Chambers nine.

The Mustangs get to face another familiar foe in Green Canyon in the quarterfinals at 3 p.m.

“We are really excited to be heading to Richfield next week,” Anderson said.

Finishing third in the region, the Wolves (16-14) got a lower seed than many up north thought they should. That didn’t stop the 13th-seeded team from moving to the quarterfinals.

“What a fun way to start the state tournament,” GC head coach Maddie Larsen said. “You can see the fire in their eyes. They were hungry and ready to play.”

Against Tooele, the Wolves were led by Sarah Blau with five aces, 51 assists and 17 digs. Chadwick had a monster match with 24 kills and 13 digs. Livi Longhurst had 24 digs and three aces. Coats had 15 kills, hitting .400. Falslev had 13 kills, while Abby Blau added three aces and seven kills, hitting .600. Eden Faux had 14 digs.

“I was so proud of our girls in both of our matches today,” Larsen said. “They were resilient, aggressive and so passionate.”

The Wolves will now play Mountain Crest in the quarterfinals on Tuesday. They split during the regular season.

“We game out swinging, which put us on top early,” Logan head coach Joe Cullumber said. “We struggled to hold that momentum and missed a few key plays. It just didn’t fall our way today, but they fought hard.”