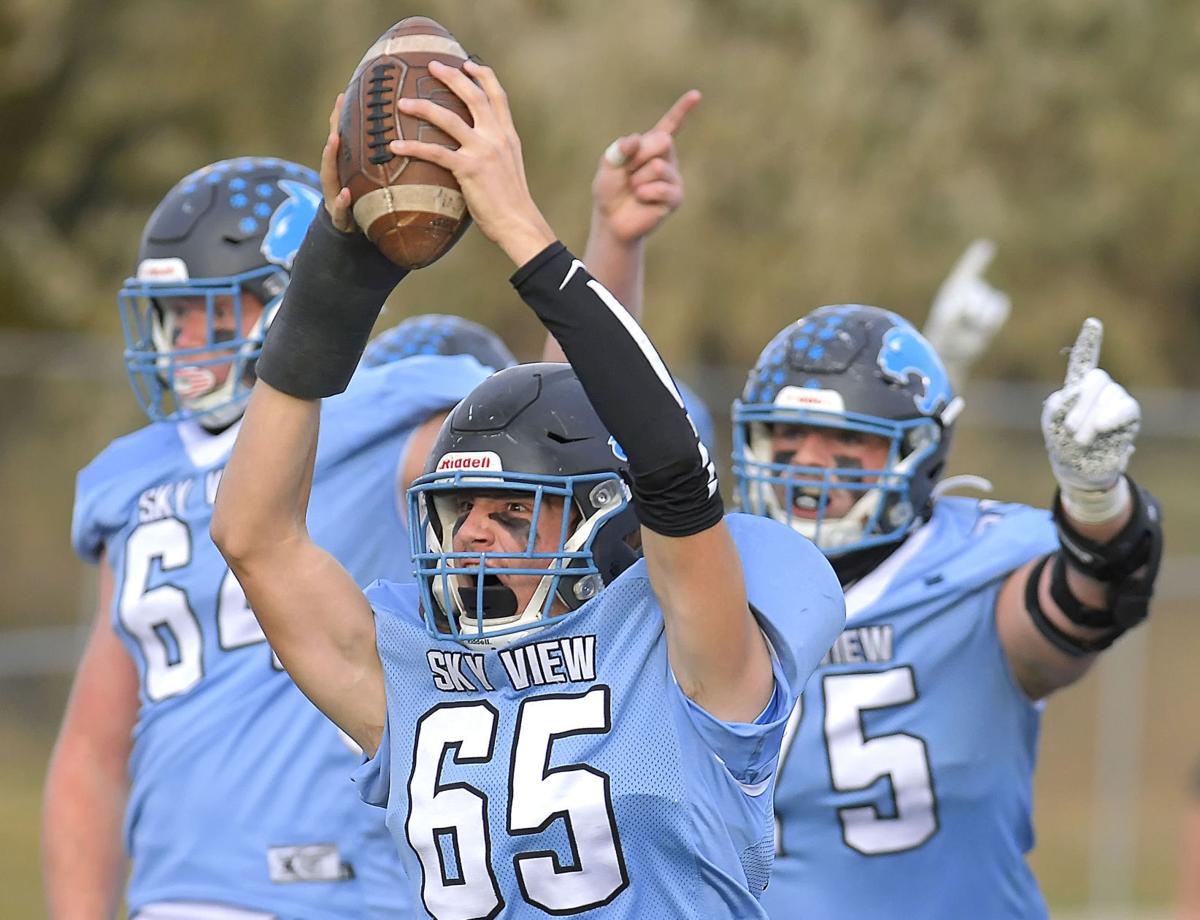 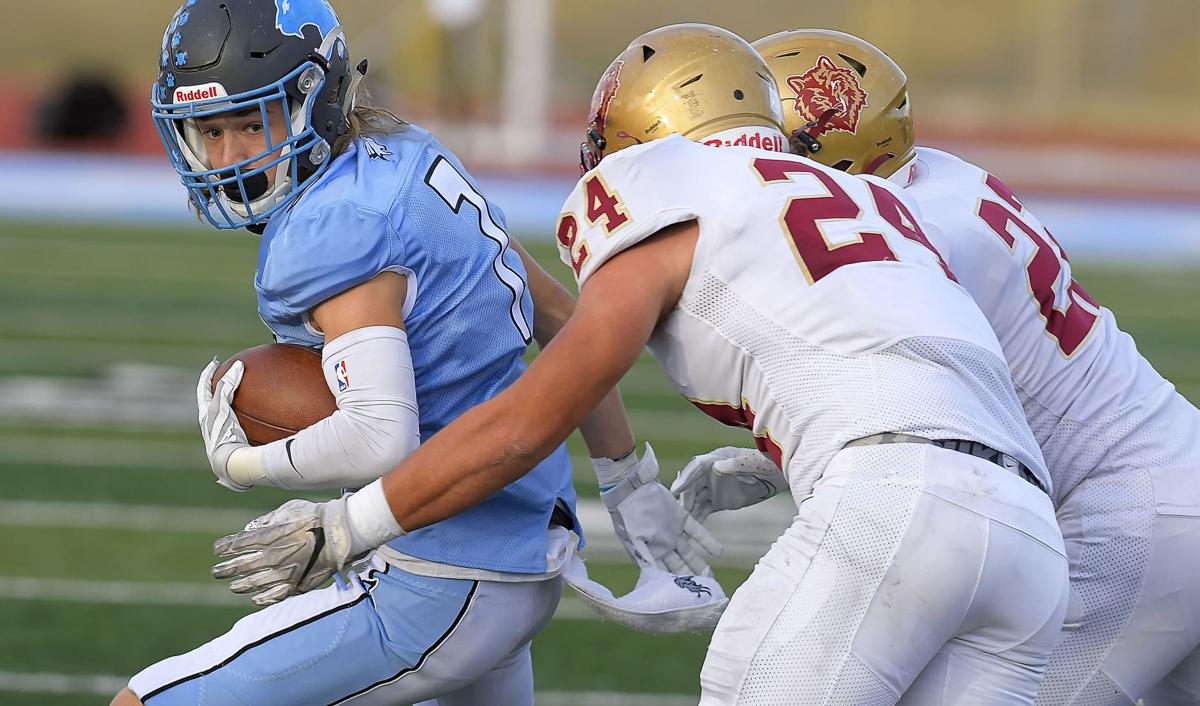 SMITHFIELD -- The Sky View football team scored early and often on Friday evening, winning its 4A state quarterfinal game in convincing fashion over the Cedar Reds, 35-7, to improve to 11-0 on the season and set up next week’s semifinal showdown against the Ridgeline Riverhawks.

It was a collective effort by the top-seeded Bobcats, who extended their winning streak to 24. The offense was able to run the ball effectively — totaling 217 yards on the ground — while the defense forced two turnovers and held Cedar to zero points until the waning moments of the game. And special teams were able to score a touchdown with an Isaac Larsen interception on an ill-advised fake field goal pass.

Things got rolling for the Bobcats on the opening possession as senior quarterback Kason Carlsen led his team downfield, completing passes to seniors Walter Collins and Larsen, ultimately reaching the end zone on a 2-yard scamper with 6:57 remaining in the first quarter.

On No. 8 Cedar’s first drive, Bobcat senior Hunter Lewis forced a fumble, and the Bobcats recovered it on the Reds’ 32-yard line. The home team would take full advantage as Carlsen once again found himself in the end zone after a 3-yard run to go up 14-0 just seven minutes into the game.

“Our focus this week has been to able to come out and start fast mainly in the line of scrimmage and that’s exactly what we did,” said Carlsen, who was effective all night, running the ball for 82 yards and completing 9 of his 13 passes, good for 97 yards in the air.

The visiting Reds would try to respond to the Bobcats early surge as senior quarterback Jaron Garrett found success running, getting the team 10 yards away from the goal line. But after a big Sky View sack — the Bobcats would have five of on the night — Cedar would have to settle for a 36-yard field goal.

Only the Reds didn’t settle, instead opting for a fake field goal pass, which would be intercepted by Larsen and returned 99 yards for a touchdown — the highlight of the evening that put the Bobcats up 20-0 and made things feel all but over just 11 minutes into the game.

“I thought it was coming back with the penalty call,” Larsen said.

Only it wasn’t a penalty call. It was a sideline warning issued by the officials after several Sky View players spilled onto the field in celebration.

After Sky View’s defense got another stop, the offense manufactured a 90-yard touchdown drive as Collins — who finished the night with 55 rushing yards — and Carlsen ran the ball behind the aggressive Bobcat offensive line and capped it off with a 1-yard touchdown dive by Carlsen — his third rushing TD of the evening. After the successful two-point conversion, it was 28-0 with 6:00 minutes left in the second quarter.

“If you go back and watch the game on film, our offensive line every time was just pushing and pushing,” Carlsen said. “They were four yards ahead before we’re even going. I mean, that helps a ton.”

“We drive off of running the football first,” Howell said. “Super proud of our offensive line and then our guys’ ability to find holes and hit it hard.”

The one blemish would be a late first-half interception thrown by Carlsen, but the Bobcats’ defense quickly got the ball back after Lewis forced a second fumble.

The second half would begin with Lewis getting a sack to stall Cedar’s opening drive of the half. Then, the Bobcats went down and scored on an 8-yard rush by junior Truman Moser to go up 35-0 with 9:00 left in the quarter.

The remainder of the game would be rather uneventful as the Sky View offense started to stall a little bit. But the hosts were content to chew up the clock and take the victory.

Cedar (7-5) would continue to battle, but QB draws by Garrett seemed to be the only way the Red’s could effectively move the football. They finally got on the board with a 19-yard touchdown pass from Garret to senior Charles Cook with 3:29 to go in the game.

The 35-7 victory sets up a home game in the 4A semifinals against Ridgeline. The Bobcats — who won the first matchup between the schools, 17-14 — are looking forward to it.

“Its fun. We’ve played them ever since we were about 6, 7 years old,” Carlsen said. “The rivalries are always there. Hopefully we just have a lot of fans come out, and hopefully we start fast and get business done.”

Brayden Bunnell threw a trio of touchdown passes and rushed for another score as No. 2 Pine View rolled past No. 10 Bear River at home. The Panthers (11-1) will host Region 9 rival and third-seeded Snow Canyon (10-1) in the semifinals next week. The Warriors advanced with a come-from-behind 20-19 victory over No. 6 Stansbury.

Bear River (5-6) found paydirt on a 3-yard run by Kace Jones midway through the second quarter to pare its deficit to 14-7. The momentum was short-lived, though, because Pine View speedster Dominique McKenzie returned the ensuing kickoff 100 yards to the house. McKenzie also had a 78-yard TD reception.

The Panthers then proceeded to punch their ticket to the semifinals for the third consecutive season.