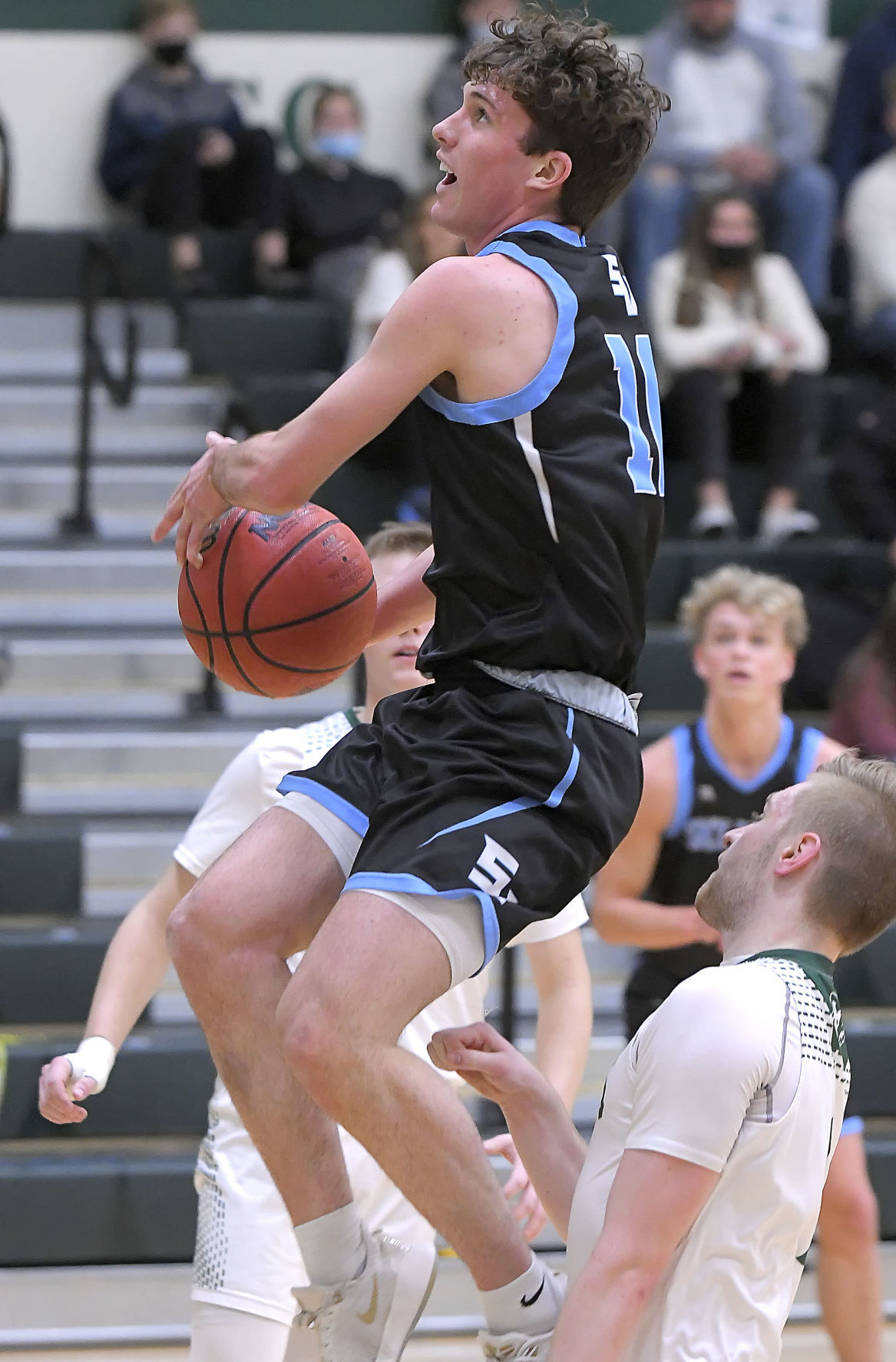 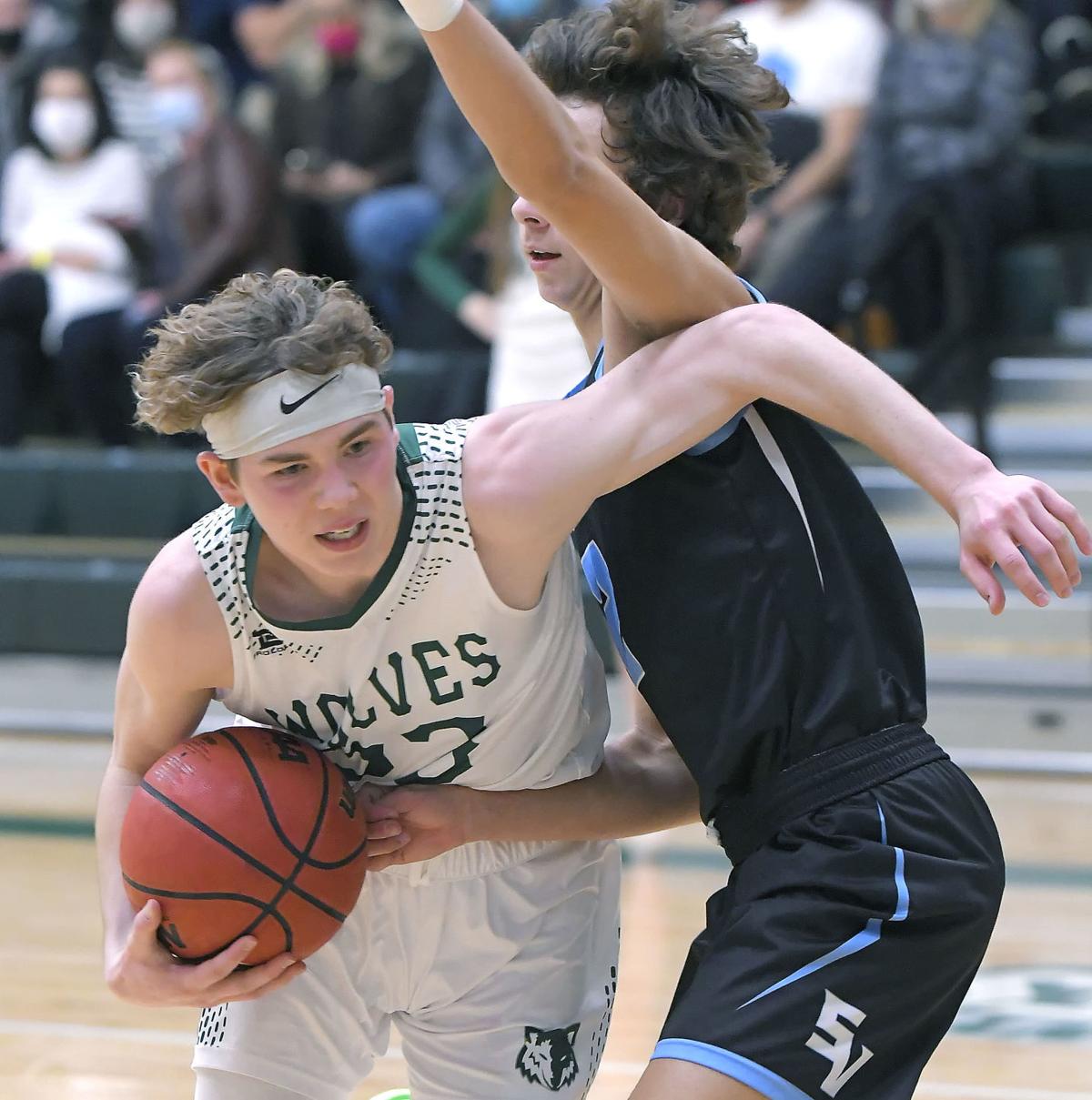 NORTH LOGAN ‑‑‑ For the second straight Wednesday, the Bobcats caught fire from 3-point range in the third quarter, and that spelled doom for another Region 11 boys basketball opponent.

Sky View knocked down six 3-balls in the third quarter to turn a comfortable 12-point lead into a commanding 18-point one en route to a 79-49 road victory over Green Canyon. Simply put, it was a complete team effort for the Bobcats, who limited the Wolves to 19 points in the first half and outscored the hosts in every quarter.

"Our defense was the key because we preach all the time that our defense has to feed our offense, and I felt like we were able to take advantage of a few things in the first half," SV head coach Kirk Hillyard said. "But (Green Canyon) battled back quite a few times in the first half. I mean, we needed to take the ball inside. We have the size advantage and I thought we got quite a bit of that in the first half. And then in the second half they started doubling and as soon as they started doubling, we kicked it out and guys knocked down shots. And when they're doing that, it's pretty tough to defend when you have that inside-out game going."

Indeed, the Bobcats (11-3, 4-0 region) were able to establish their post presence in the early going as Evan Hall scored eight of his 14 points in the first quarter. The first-team all-state offensive linemen converted on a trio of putbacks in the opening quarter and pulled down at least six offensive rebounds before halftime.

"Evan's great," said SV guard Titan Saxton, who shined off the bench as he matched Hall with a game-high 14 points. "He scores the ball and he brings a crowd to him, so when (the ball) gets in, if it's not open he kicks it out, and it's fun basketball. I love playing with Evan. He's a stud."

The Wolves (8-8, 1-3) only trailed by two points late in the first quarter, but the Bobcats scored the final five points of the quarter and never let their lead dip below four the rest of the way.

"It's no secret that their size was going to give us fits," GC head coach Dan McClure said. "Because of the mismatch problems, we were hopeful they would miss shots from the perimeter. That obviously didn't happen. ... I thought our guys executed things. Sky View was just too good tonight."

As expected, the Bobcats clogged up the paint and essentially challenged everyone with the exception of sharp-shooter Cade DeBoard to beat them from 3-point range. Three different Wolves buried one trey apiece in the second quarter, but those were the only points the hosts scored during the quarter.

"I mean, if we're going to lose, we're going to lose by them hitting the threes," Saxton said. "And they've got a few good shooters and good players, but our defense, we preach that also and we worked really hard at that this week in keeping guys in front of us. And (our defense) was awesome."

A Jacob Regen shot from downtown pared Green Canyon's deficit to 26-19, but Sky View promptly responded with a 5-0 run to end the opening half. Taydem Neal drained a 3-ball at the buzzer, and it was a sign of more outstanding perimeter shooting to come for the Bobcats, who finished with 11 3-pointers.

Sky View went on a 8-0 spurt spanning the third and fourth quarters to terminate any slim chance of a Green Canyon comeback. The Bobcats led by as many as 30 points in the final quarter.

Nine different Bobcats scored in the contest. Isaac Larsen joined Hall and Saxton in double figures with 13 points. Jackson Schumann, who blocked a trio of shots, Kason Carlsen and Neal chipped in with eight points each.

"That's probably one of our better team effort (this season)," Hillyard said. "I don't think we've played that well as a team probably since the Weber game, so when we play that way we're a dangerous team."

It was also a good night for Ridgeline and Logan as both teams rolled at home. Ridgeline outscored Mountain Crest 37-11 over the middle two quarters in its 64-35 win, while Logan took a 32-13 advantage into the locker room and never looked back en route to a 62-38 triumph over Bear River.

Peyton Knowles led the charge for the Riverhawks (8-8, 3-1) as he poured in 21 points. Kaden Cox and Chase Hall both finished with nine points for Ridgeline, which got eight points from Jake Smith.

"I was really pleased with our defensive effort tonight," RHS head coach Kyle Day said. "The kids executed the gameplan and played with great energy. We had a ton of balance offensively and the kids took what they gave us. Kaden especially let the game come to him and was patient. Everyone we play has face guarded Kaden and his gravity is really opening up the floor for everyone else."

Likewise, it was a great team effort for the Grizzlies (11-3, 3-1), who got 14 points from Ethan Davis, 11 from Jadin Penigar, 10 from Oliver Hashimoto and nine from Isaac Tuft. Nine different Grizzlies scored in the contest and the hosts knocked down 10 3-balls.

"I'm really proud of the way our team mentally approached the game," LHS head coach Logan Brown said. "Every guy that came in for us produced. Our bench was huge. Cooper Pond is one of those spark guys that stood out. He came in when we were in foul trouble and guarded his butt off. We were focued and dialed in. It says a lot about our senior leadership in our program. We have a group that is very selfless."

Due to the Herald Journal's early deadline, coverage of Wednesday's big Century at Preston showdown will not be available in print. A story, however, can be found online.