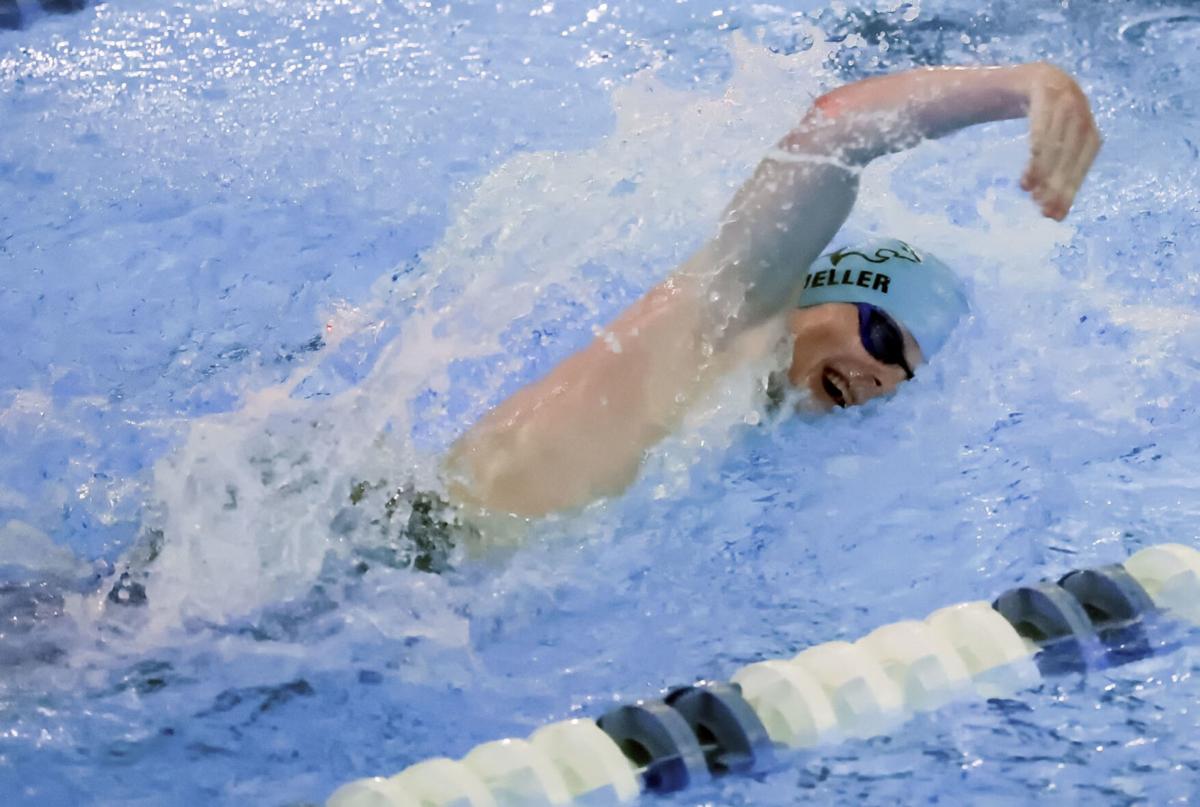 Sky View’s Jaxon Tueller swims to second place in the 200-yard freestyle at the 4A state meet at the South Davis Recreation Center in Bountiful on Saturday. 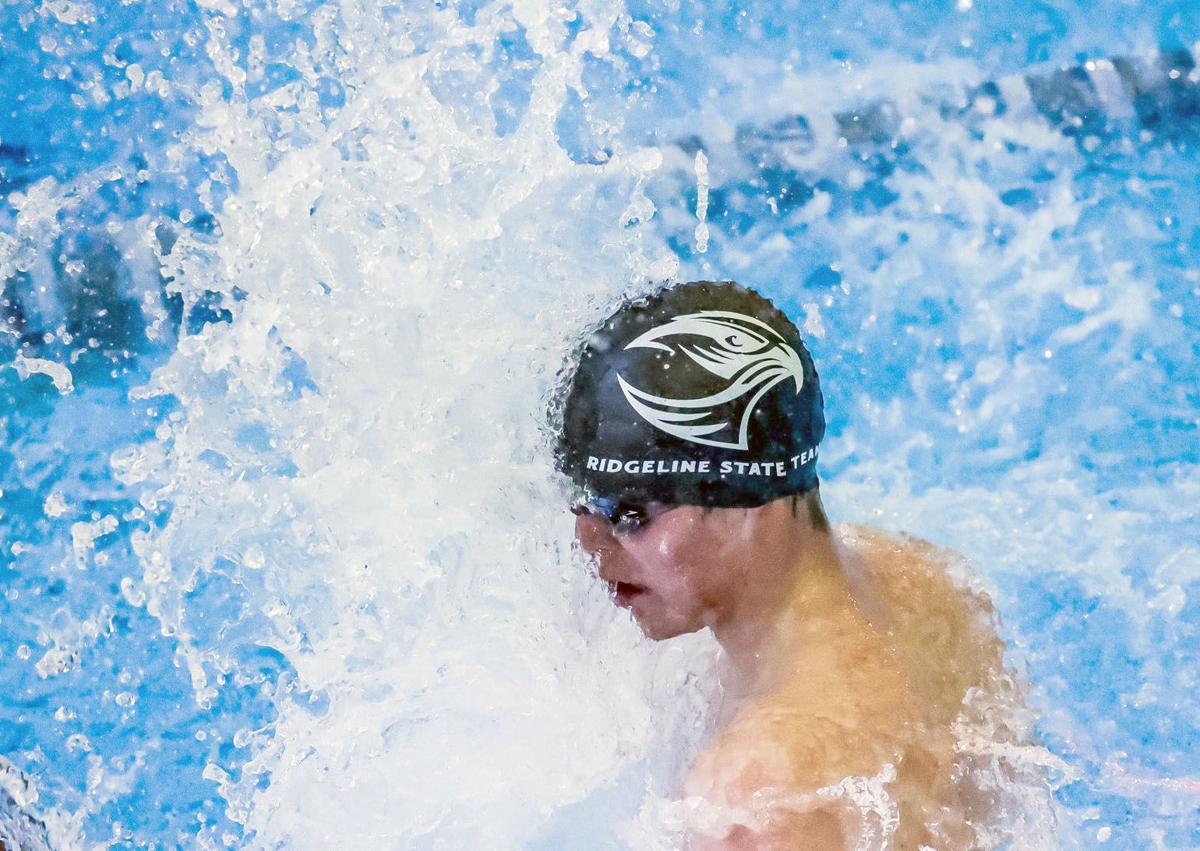 Ridgeline’s Anthony Caliendo splashes in celebration after winning the 50-yard freestyle at the 4A swim meet at the South Davis Recreation Center in Bountiful on Saturday, Feb. 13, 2021.

Sky View’s Jaxon Tueller swims to second place in the 200-yard freestyle at the 4A state meet at the South Davis Recreation Center in Bountiful on Saturday.

Ridgeline’s Anthony Caliendo splashes in celebration after winning the 50-yard freestyle at the 4A swim meet at the South Davis Recreation Center in Bountiful on Saturday, Feb. 13, 2021.

For the second time in as many meets, it came down to the wire between the Sky View and Ridgeline boys swimming programs — this time for a trophy at the 4A State Championships.

Just like they did two weeks ago, the Bobcats sparkled down the stretch and was able to accomplish their goal. Sky View held off a very good Ridgeline team for the runner-up trophy at the two-day meet, which concluded Saturday afternoon at the South Davis Recreation Center in Bountiful.

The Bobcats racked up 261 points to the Riverhawks’ 239 and were able to take second place at this meet for the second straight year. Region 9 champion Snow Canyon showcased its star power and was able to run away with its first-ever state title with an impressive 352 points.

“Snow Canyon we knew would be out of reach, but we knew we could get into second place,” SV head coach Marcus Singleton said. “The boys stepped up and had some amazing finishes. Jackson (DuBose) had some really close finishes where he moved up and really helped the team. We are excited to be bringing home a trophy again. It took everyone stepping up and working together.”

The Bobcats accumulated a wealth of points during the final three events of the competition — the 100-yard backstroke, 100 breaststroke and 400 freestyle relay — and that ultimately made the difference. Sky View athletes finished first, fourth, fifth and ninth in the back, DuBose came from behind to place third in the breast, and Jaxon Tueller, Peter Gibbons, Alex Parks and DuBose teamed up to capture the silver medal in the aforementioned relay.

“We knew all along that we had to finish strong and since we were able to, it was such a gratifying feeling,” Tueller said. “I feel like I’m on cloud nine.”

Tueller certainly did everything he could to help the two-time defending Region 11 champions claim that silver trophy. In addition to his clutch performance in the 4x100, the junior reigned supreme in the 100 back with a personal record time of 54.17 seconds, was the runner-up in the 200 free (PR of 1:50.83) and helped the 200 medley relay squad capture a bronze medal. Tueller was joined on that relay by DuBose, Tavin Dubon and Alex Parks.

“I made it a goal to take first in the backstroke and I’ve worked all season to get it, and it means everything that I was able to win,” Tueller said.

As Singleton said, DuBose scored several crucial points for his team. Not only did the junior finish third in the 100 breast (1:02.40), he also PRed and was fourth in the 200 IM (2:04.70). A mere two-10ths of a second separated third from seventh place in the breaststroke.

“Man, that was insane,” DuBose said. “It was really intense. There’s some really good competition in the 100 breaststroke throughout 4A. It was pretty fun, though. I really enjoy that competition. All the swimmers around me really pushed me to go faster. They are really some great people and I’m glad that I had the opportunity to race them.”

Those extra points secured by DuBose and other Bobcats were so critical because the Riverhawks put together another great meet. Seniors Anthony Caliendo and Isaac Sorensen provided a potent 1-2 punch for Ridgeline.

Caliendo was without question one of the stars of the meet as he left Davis County with one gold medal and three silvers. The senior broke the school record on his way to a title in the 50 free (21.89), was the runner-up in the 100 free (48.28), and anchored the 200 medley and 200 free relay foursomes to the No. 2 position on the podium.

“It meant a lot to me,” Caliendo said. “I’ve been chasing a school record in the 50 free for five years and I finally got it today. And it was very fun to show the rest of the state who we are. Ridgeline is a relatively new school and so it’s cool to pull up out of the blue and do something awesome.”

Sorensen, Cole Dustin and Joe Tenny were also on both of those Ridgeline relay teams. Sorensen also won medals — the top six placers in an individual event, plus swimmers on a top three relay team, are awarded medals — by posting the second-fastest time in the 100 butterfly (54.10) and the third-fastest clocking in the 200 IM (2:04.44).

“It means a lot,” Sorensen said of his four medals. “I’ve been blessed to have such a great team and great group of guys to help me along the way, not to mention an amazing coach (Taryn McEuen) who’s believed in me longer than I have in myself, and a great mom who supports me in everything I do.”

In addition to the aforementioned athletes, other local kids who earned the right to stand on the podium after both of their individual events were Logan’s Spencer Bernhardt and Green Canyon’s Tyson Farnsworth.

“Last year I was just out-touched in the 100 breast and I wasn’t even close to medaling in the IM, so it means a lot to be rewarded with how hard I’ve worked this year,” Bernhardt said.

“The (small) time difference will push me a lot as I swim my senior year, and it will push me to break a 22,” Farnsworth said.

Bunnell won the B division title in the 200 IM (2:08.15), as did Johnson in the 200 free (1:56.84). Those swimmers with the eight fastest times from Friday’s preliminary heats advanced to the A finals, with the next eight fastest competitors making it to the B finals.

Ridgeline, Sky View and Green Canyon finished 2-3-4 in the 200 medley relay. The GC squad was comprised of Bunnell, Farnsworth, Seamons and Josh Jensen.