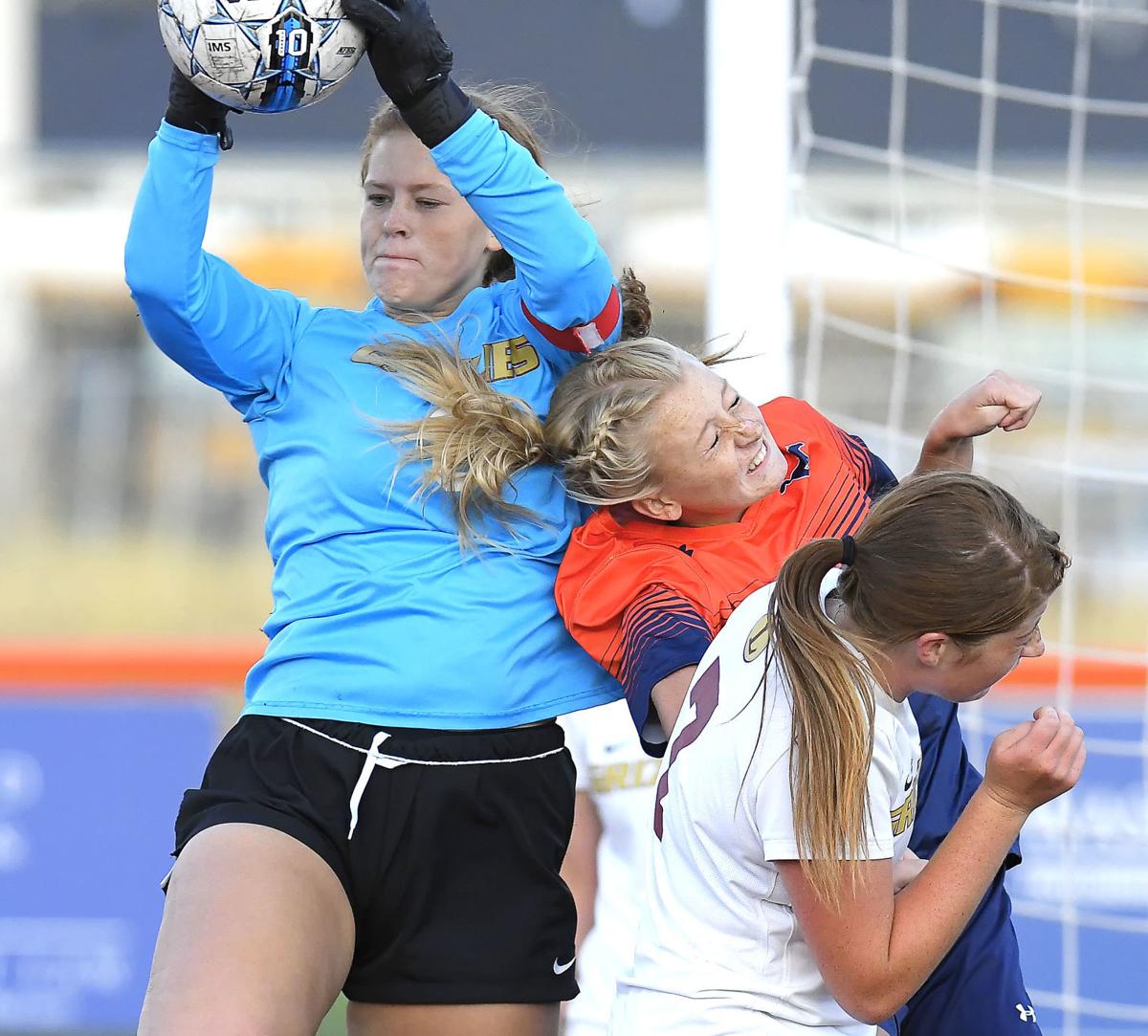 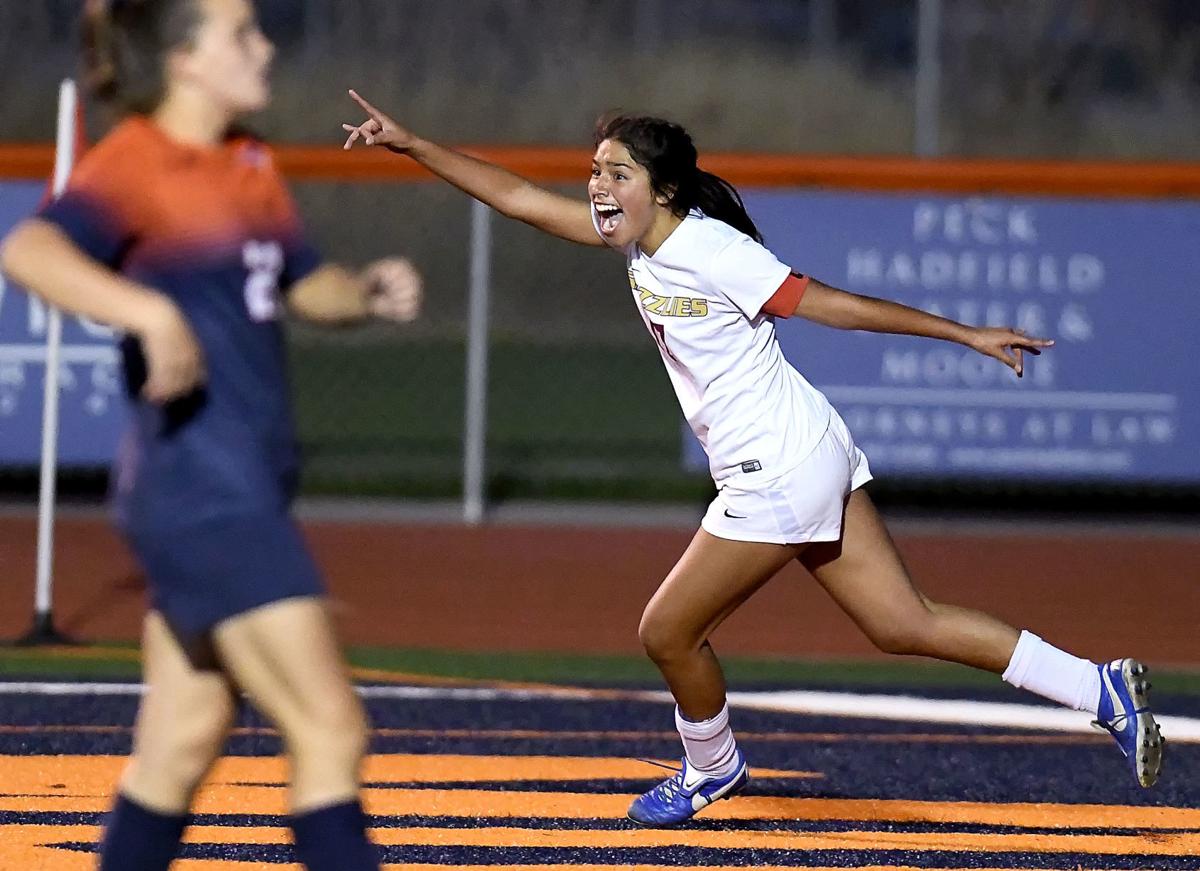 Logan's Bizzy Arevalo celebrates after scoring a goal against Mountain Crest on Thursday in Hyrum.

Logan's Bizzy Arevalo celebrates after scoring a goal against Mountain Crest on Thursday in Hyrum.

HYRUM — The Logan Grizzlies pulled themselves out of a season-long funk, scoring three goals in the first half and holding on to claim a solid Region 11 road win over Mountain Crest by a score of 5-3 Thursday night.

Less than a year removed from running the table in league play and taking home the region crown, Logan (3-7-0, 2-2-0 region) began the year by losing seven of nine games. The Grizzlies played a gauntlet of a non-region schedule, but an uninspiring 2-0 win over Bear River and losses to Ridgeline (3-2) and Sky View (3-1) did nothing to raise the team’s spirits.

Thursday changed that as, after the final whistle, the team celebrated a little more than one would expect for a mid-season game.

“Today I finally feel like we put our hard work together and finally got some goals out of it,” Logan head coach Natalie Norris said. “Which is what we’ve been working for all season.”

“It was nice to finish out the win and not lose again,” senior midfielder Alec Kennington said.

Kennington scored the first of the Grizzlies’ three first-half goals. Just two minutes in, the senior attacking mid took the ball at the top of the box and slotted a slow-roller right into the bottom left corner of the net, barely bypassing MC’s keeper Dakota Andersen.

A little less than 15 minutes later, Bizzy Arevalo made a long solo run into the final third and drew a foul in the penalty box. Arevalo stepped up to the spot and put the ball home with ease. Gracie Laney added the final score of the half in the 38th minute, catching Andersen off guard by lobbing a shot from 25 yards just under the crossbar.

Dominant possession powered the first-half surge, and it all started with the midfielders. Kennington, Whitney Lopez — who recently returned from an injury — Emma Browning and Carlie Jenkins formed a great three-man rotation in the center of the formation.

“I love it when my midfielders combine, and they did really well with that tonight, Norris said. “The biggest thing was communication with the three of them. They were just able to rotate through everything, and it showed on the field tonight.”

The second half saw traces of the Grizzlies’ failings that plagued them in most of their first nine games. Mainly the inability to close out and maintain the momentum in the first half. This nearly cost Logan as Mountain Crest (3-6-1, 2-2-0) has had nearly the opposite problem this year — lackluster openings and strong finishes.

True to the trends, the Mustangs outscored the Grizzlies 3-2 in the second half, creating a lot of tension at several points in the final 40 minutes.

Logan started the half well. Arevalo scored a second goal in the 50th to put the visitors up 4-0.

But back-to-back MC goals in the 53rd minute by Ellie Parker and 58th minute from Baylie Baldwin threw the potential result in doubt. Kennington said it was “definitely scary” with the Mustangs suddenly on their heels with the added fear from a couple of Grizzlies going down with injuries.

“We were lucky to not get a few more (goals) against us,” Norris said.

Mountain Crest nearly fulfilled those fears with several more chances to even up the game late in the half. Birkli Barrera had her own one-on-one with Logan’s keeper, Cadence Martindale, but on this occasion the goalie came out on top with Barrera’s kick at the top of the box ricocheting out of play off of Martindale. Baldwin found herself wide open in the six-yard box on a cross, but her header smacked the post and was cleared away.

“We had some really good chances,” MC head coach Amber Hyatt said. “If we played the first half like we played the second half, I think that game would have been ours.”

Had those and several other chances come earlier or not fallen by the wayside, Mountain Crest’s final goal of the game, a penalty drawn by Baldwin and converted by Kadison Kendrick, might have been an equalizer or even a winner. As it stood, Logan put home one more, a tap in by Ashley Coppin on a mad scramble in the box in the 63rd minute which made Kendrick’s 72nd minute goal little more than window dressing on the box score.

Ridgeline (7-3-0, 3-1-0) bounced back from its 1-0 loss to Green Canyon on Tuesday with a dominating victory, riding six first-half goals and cruising in the second half.

London Miller added to her region-leading 18 goals, taking the total up to 20 with her seventh multi-goal game of the season and second in region play. Miller also had an assist. Peighton Harward also scored a brace, plus one assist.

Thanks to results elsewhere in the valley, namely Green Canyon vs Sky View, the Riverhawks are once again in first place in Region 11. Bear River (2-8-0, 0-4-0) remains in last place as the only team without a win in region play.

Sky View (6-3-1, 2-1-1) and Green Canyon (7-1-1, 2-1-1) produced the first tie in region play of any team this season. The two sides were on a bit of a roll in their respective schedules. On Tuesday, both produced wins to bounce back from losses on Sept. 5 Overall, between SV and GC there have been just two losses since August 13.