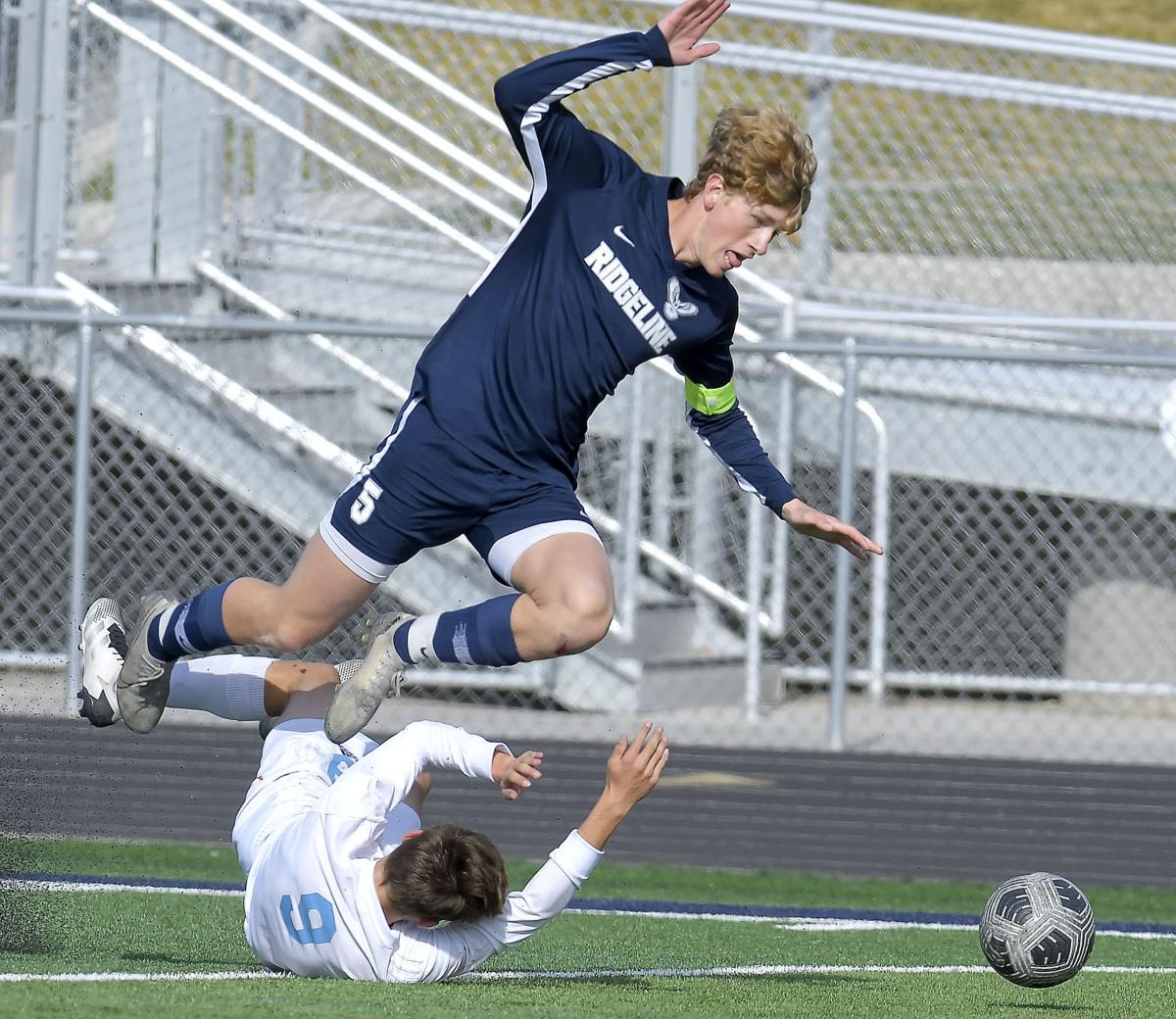 Ridgeline’s Luke Dustin (5) leaps over Sky View’s Isaac Larson in the first half Wednesday evening in Millville. The Bobcats beat the Riverhawks, 2-0. 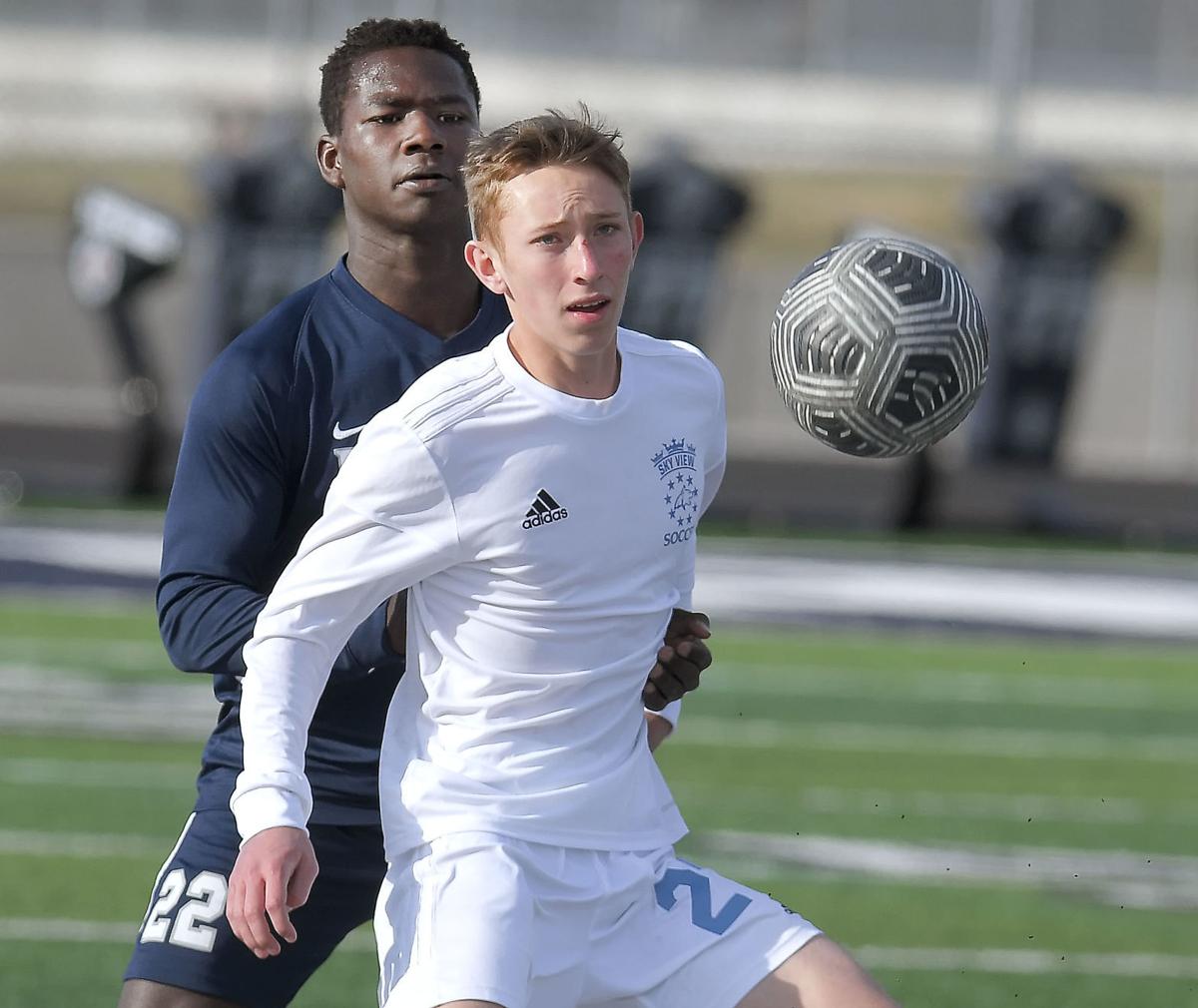 Ridgeline’s Luke Dustin (5) leaps over Sky View’s Isaac Larson in the first half Wednesday evening in Millville. The Bobcats beat the Riverhawks, 2-0.

MILLVILLE — To the delight of head coach Jorge Cruz, his Bobcats have elevated their level of play since last Wednesday’s frustrating 2-0 loss at Green Canyon.

Sky View bounced back last Friday by dispatching of Logan 4-0 at home, and then put together one of its best all-around performances of the season in a 2-0 triumph over Ridgeline in a pivotal Region 11 boys boys match on a windy Wednesday evening.

Both teams were tied for second place in the region standings heading into Wednesday’s showdown. It was sweet revenge for the Bobcats (9-4, 6-2), who lost to the Riverhawks (8-6, 5-3) 1-0 at home on April 2.

“I think when we played these guys last time, I believe to be honest with you (that) these boys were a little bit too confident, too cocky, and it was a good thing,” SV head coach Jorge Cruz said. “I wasn’t a good thing that we lost, but it was a good experience recognizing that we have to fight. Every game in this region is going to be a challenge because (both teams) arrive to the game with the same expectations to get the victory, and we didn’t do enough (in that first game). ... But I think today everybody showed that they wanted the victory and they got it.”

Sky View controlled the run of play for the much of the first half against a solid Ridgeline side, which was a noteworthy accomplishment considering the Bobcats were playing into a pretty fierce headwind. The Bobcats outshot the Riverhawks 7-2 in the first half and 15-5 in the match.

Landon McClellan nearly headed in a Caleb Miller corner kick in the 15th minute, and the Bobcats didn’t have to wait much longer for their breakthrough. Less than two minutes later, Taten Merrill hustled to re-win a ball and found Cole Thedell inside the 18-yard box. Thedell collected the pass, took one touch and fired an unsavable right-footed shot inside the upper 90 of the far post.

Miller converted on a Jakobi Dursteler free kick later in the opening half, but the Bobcats were whistled for a handball and the goal was disallowed.

“We just wanted to come out strong and jump on them early,” said senior Kai Schwartz, who helped anchor a solid Sky View midfield Wednesday. “I mean, we were pretty disappointed in our loss against them last time, so I think getting that goal early in the first half and then having the wind in the second half really helped us control the game more.”

Sky View added an insurance goal six minutes into the second half when Isaac Larson played a square ball all the way across the face of the goal, and Miller was able to poke it in. Ridgeline goalkeeper Riley Garvert hustled on the play and nearly made the save.

The Bobcats nearly struck later in the half when Thedell’s flick header missed the near post by a few inches.

Ridgeline definitely played better in the second half, but the final product wasn’t quite there. Jackson Hulse did force Sky View keeper Cordell Ludlow into a relatively challenging save in the final two minutes of action. Ludlow recorded his fifth shutout of the season.

The Riverhawks did have an open player in the box in the opening half, but Bobcat defender Davis Hall was able to get his head on a cross that could have resulted in an equalizer.

“Obviously (Sky View) came out with the will to go put goals in and they accomplished that, so Sky View performed really well today,” RHS head coach Dale Buchanan said. “So I don’t want to detract from anything they did, but once again it comes down to our guys, every player being dialed in to what we need to do and be ready to do that at the first minute and not at the 41st minute. We need to be an 80-minute team in order to be (capable of) a championship run.”

Mountain Crest snapped Green Canyon’s six-match winning streak with a gratifying 4-1 triumph at home, while Logan outlasted visiting Bear River in overtime, 4-3. The Wolves (11-3, 6-2) and Bobcats are now tied for the top spot in the region standings, while the Mustangs (10-4, 5-3) and Riverhawks are tied for third.

Oliver Thompson recorded a brace for Mountain Crest — his first goal on a volley and his second on an over-the-top pass from Dylan McArthur to provide the exclamation point. McArthur also found the back of the net for the Mustangs, who got a goal from Eli Clark, plus assists from Gabe Newman, Davin Ritchie and Zane Allen.

Green Canyon, which got a goal from Michael Bingham and an assist from Baldo Chavez, had only conceded three goals during its aforementioned winning streak.

Meanwhile, Logan (3-10, 2-6) surged back from a 2-1 deficit and took a 3-2 lead over Bear River, but the Bears (0-12, 0-8) were able to equalize with seven minutes remaining in regulation. However, Mowlid Nur found fellow Grizzly Andy Martinez for the golden goal eight minutes into OT.

Andrew Thornley contributed with a goal and an assist for the Grizzlies, who also got goals from Adam Manassra and Udy Marquez. Porter Stowell and Fredy Mejia were credited with assists for the hosts.

“I was so pleased with the heart and determination I saw today,” LHS head coach Natalie Norris said. “We fought hard and played well as a team. I’m excited to build off the performance we saw today.

Izzy Varela recorded a brace for the Bears, who also got a goal from Gabe Dwaileebe.