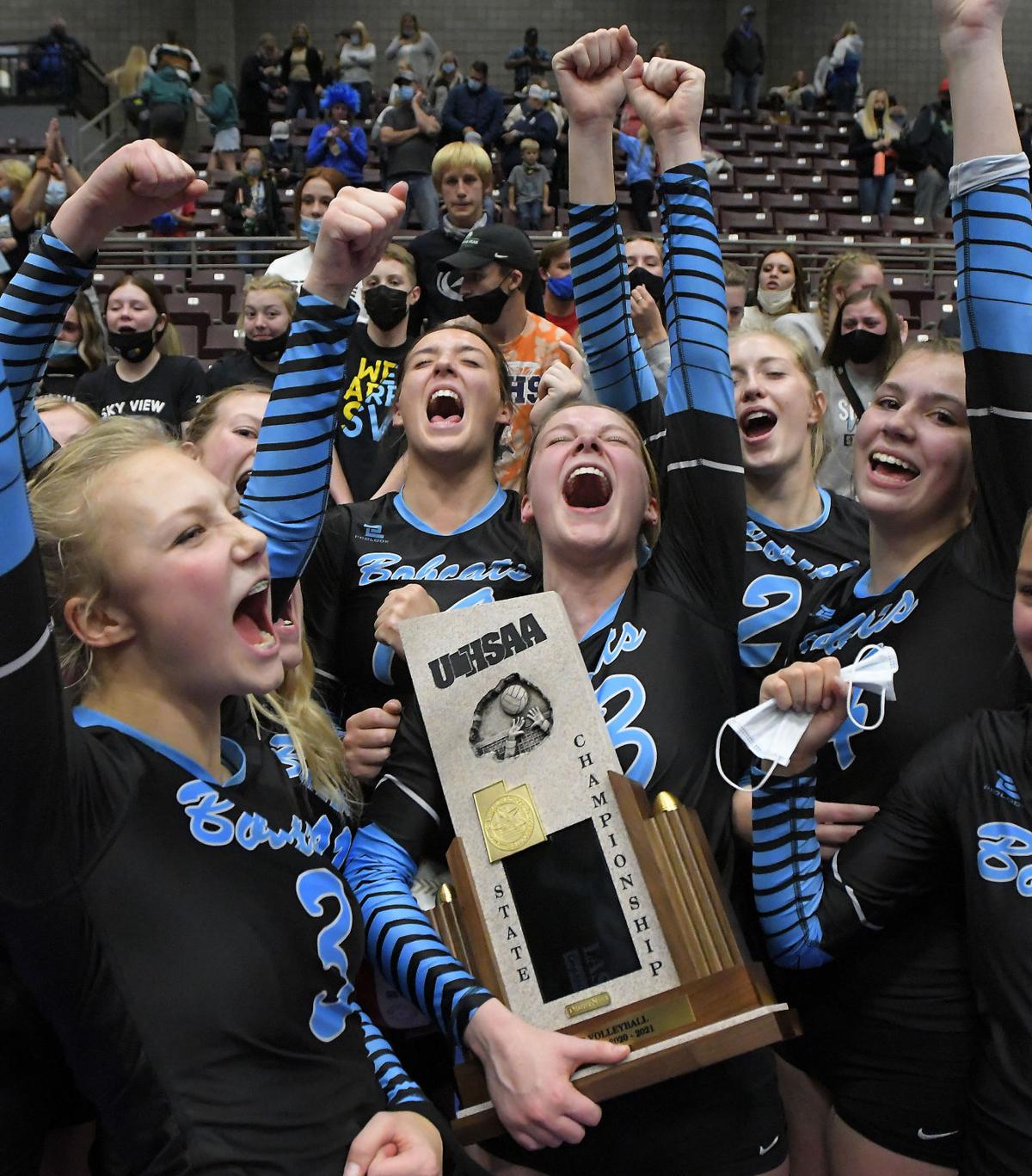 Sky View players celebrate after they defeated Snow Canyon 3-1 to win the 4A state volleyball championship on Wednesday in Richfield. 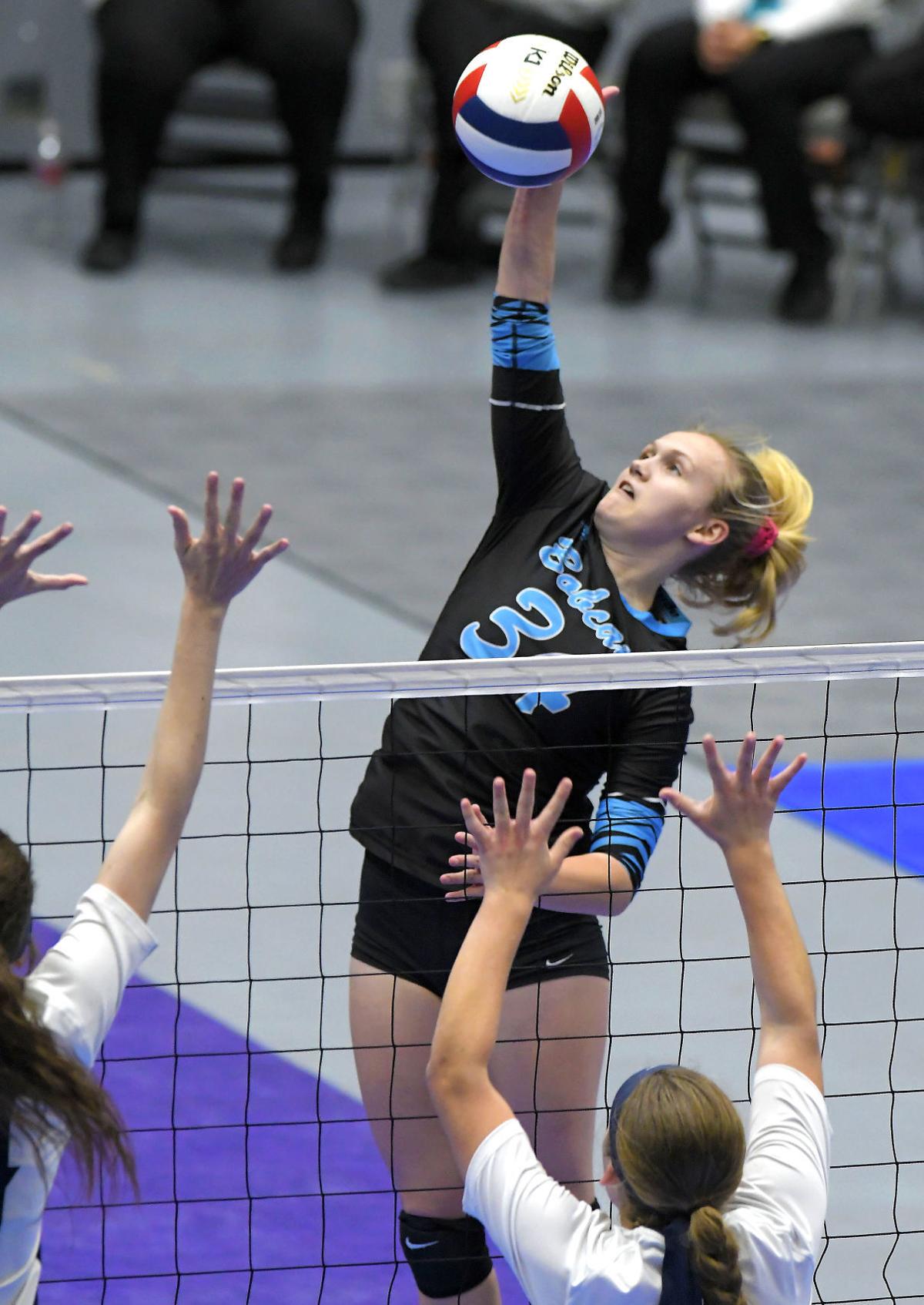 Sky View players celebrate after they defeated Snow Canyon 3-1 to win the 4A state volleyball championship on Wednesday in Richfield.

Sure, it didn’t look like a clear cut deal, but these Bobcats never let on they were nervous. Their play on the court certainly didn’t give any hint there were nerves involved Wednesday evening at the 4A State Volleyball Championships.

Sky View calmly went about its business and will be bringing home a fourth state championship trophy in the sport. The Bobcats bounced back from dropping the opening set to beat Snow Canyon in four, 21-25, 25-20, 26-24, 29-27, in the Sevier Valley Center.

“That was true guts right there and heart,” SV head coach Sheila Sorensen said. “They have just had that vision and fought for it all year. To have it come true, I’m blown away.”

It did not come easy for the top-seeded Bobcats (26-5). It was downright hard, but they liked it that way.

“This team never panics; they are calm,” Sorensen said. “They just go and try to get the next point and the next point. They never give up on each other. They trust themselves and their teammates.”

The Warriors (20-8) led late in both the third and fourth sets. That didn’t phase the Bobcats, though.

“We really work hard on our mental toughness in practices,” SV senior Haley McUne said. “That really applied here today. It was just another game, and we went out and played. We never worried when we were behind.”

The senior outside hitter took it upon herself to finish off sets. Of course her coach was calling for her to get the ball from setter Kaitlyn Hiatt.

“I told Kait(lyn), you just go set Haley right now,” Sorensen said. “She (McUne) can see the court, reads the court and knows where to put the ball. It doesn’t always have to be a pound kill. She is just an amazing competitor. She has brought that to the rest of the team.”

Trailing 24-22 in the third set, the Bobcats didn’t blink. They went out and scored four straight points to get the set and take a 2-1 lead. McUne had two kills during that stretch.

It was a bit more dire in the fourth set. Snow Canyon held a 23-18 lead. Kaytlin Smart sparked a 4-0 run with a kill, and the Warriors started making errors.

Snow Canyon held a 24-22 lead when McUne went to work. She had five kills, her fifth tying the match at 27-27. After a hitting error by the Warriors, McUne finished it off with an ace to send the Bobcats into a wild celebration.

“I was telling myself we were going to win because I couldn’t see anything else happening,” said McUne, who finished with 24 kills and hit ..419. “... I had no doubts. This is my team and I trust them and they trust me, and that was all that mattered those last couple of points.”

Going to a fifth set was not even on the minds of the Bobcats.

“I told myself, we are not going to a fifth set, we are taking this fourth one,” McUne said. “... I really like to hit, because hitting is fun. But when you are in situations like that, you have to do what is best for the team. If I have tip, I will, even if it doesn’t feel so good for me. It will feel great for everyone else. We needed that energy.”

Smart also had a big hitting night with 19 kills, hitting .586, and she had six blocks. In the digs department, Melanie Hiatt led the way with 23, followed by Abigail Doxey with 11 and McUne with 10. Kaitlyn Hiatt had 49 assists and four blocks. Melanie Hiatt added three blocks, while Brinley Forsgren had two blocks.

“Kaytlin Smart was phenomenal,” Sorensen said. “She just shined at this tournament. She is amazing. She is a true competitor.”

After six ties and two lead changes in the first set, Snow Canyon went on a 7-0 run to surge in front for good. The Warriors had a 6-foot-3 hitter that gave the Bobcats issues at times.

“We knew we had to play together or it wasn’t going to happen,” Kaitlyn Hiatt said. “It came down to trusting each other. … The nerves got to us at first, but we came back and got the next three sets.”

After dropping the first set, the Bobcats began the second with a vengeance. Sky View scored seven unanswered points and never trailed in the second. Smart finished it off with a kill to tie the match.

“We just had so much energy and believed,” Smart said. “We have been down before. We have a good mentality and trust each other. … I just played my game and knew everyone else would too. It feels really good to win.”

Then came the wild third and fourth sets.

“Give credit to Snow Canyon,” Sorensen said. “What a competitive game that was. You want the state championship match to be fun, and it was. I would play them again in a heartbeat. That could have gone either way. It was a fun match.”

McUne was a part of the last state champion team from Sky View in 2018. This one meant a little more to her.

Other seniors had similar thoughts.

“I was on the bench the last time, so it felt so good to be out there,” Kaitlyn Hiatt said.

“Our theme this year has been ‘All In’ and I think we have really taken it to heart,” Jenna Gibbons said. “We just give it all we have. This means so much, especially as a senior.”

In the first set, the Bobcats trailed early, but used a 10-0 run to get in front and stayed there. McUne and Forsgren finished it off with back-to-back kills.

The second set was all Sky View, which never trailed. Smart ended it with a kill.

Mountain Crest used a 4-0 run early in the third set to get in front and stayed there.

In the fourth set, the Bobcats reeled off 12 straight points after the Mustangs scored the first point. McUne served up several of her seven aces in the match. Mountain Crest used a 10-1 surge to get back in the set, but Sky View responded with four consecutive points as McUne got two more aces. A hitting error by the Mustangs ended the set and match.

McUne finished with 13 kills, hit .296, while passing a 2.36 and had 21 digs. Smart had 11 kills, hit .304 and had eight blocks. Gibbons had five blocks, Forsgren had three blocks and nine kills, and Melanie Hiatt had three blocks, along with 11 kills. Kaitlyn Hiatt had 40 assists and also got in on the block party with five. Kelsey Spackman had 14 digs.