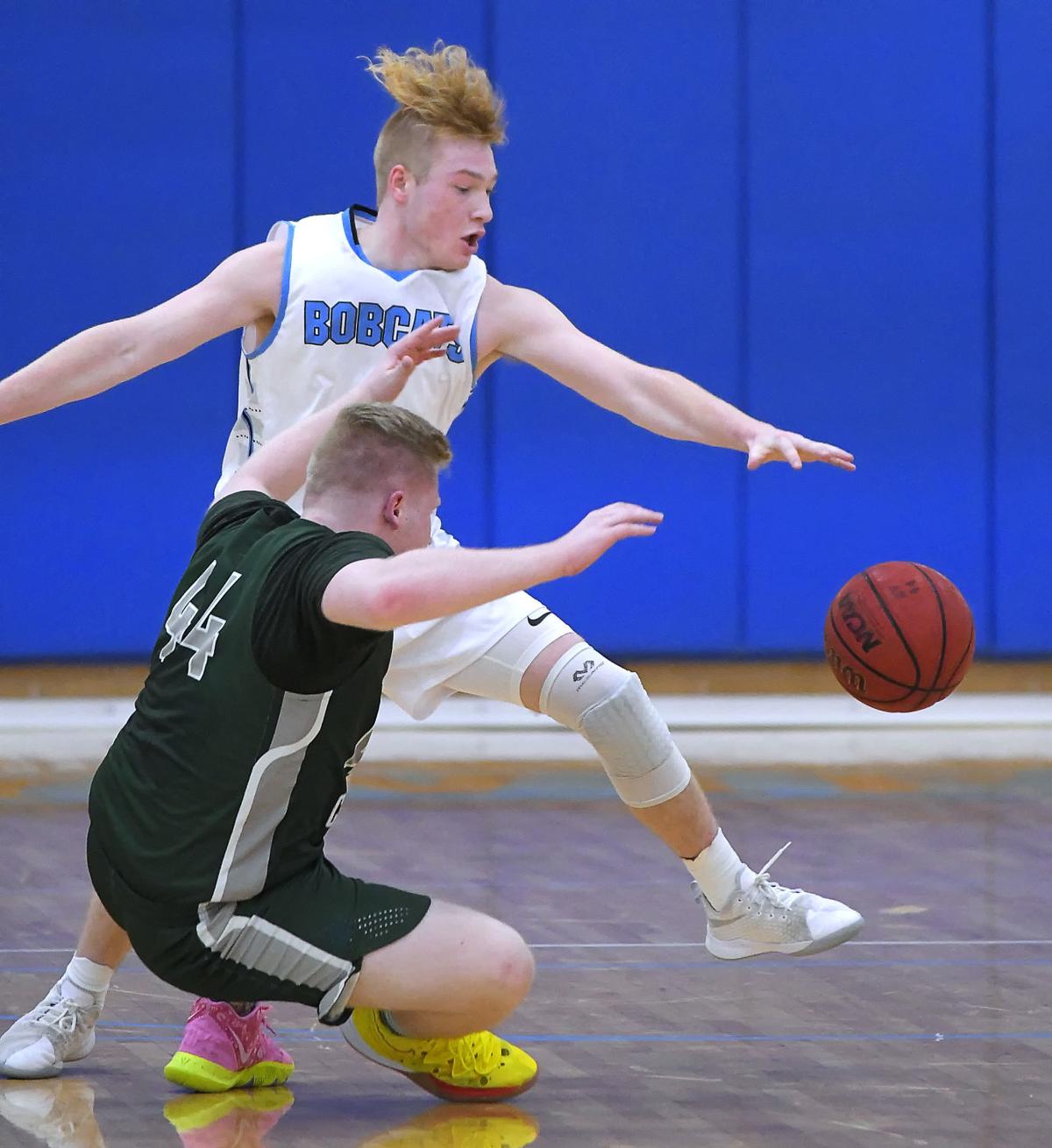 Sky View’s Kason Carlsen steals the ball from Green Canyon’s Cole Deboard on Wednesday in Smithfield. To view more photos from the game, go to hjnews.com. 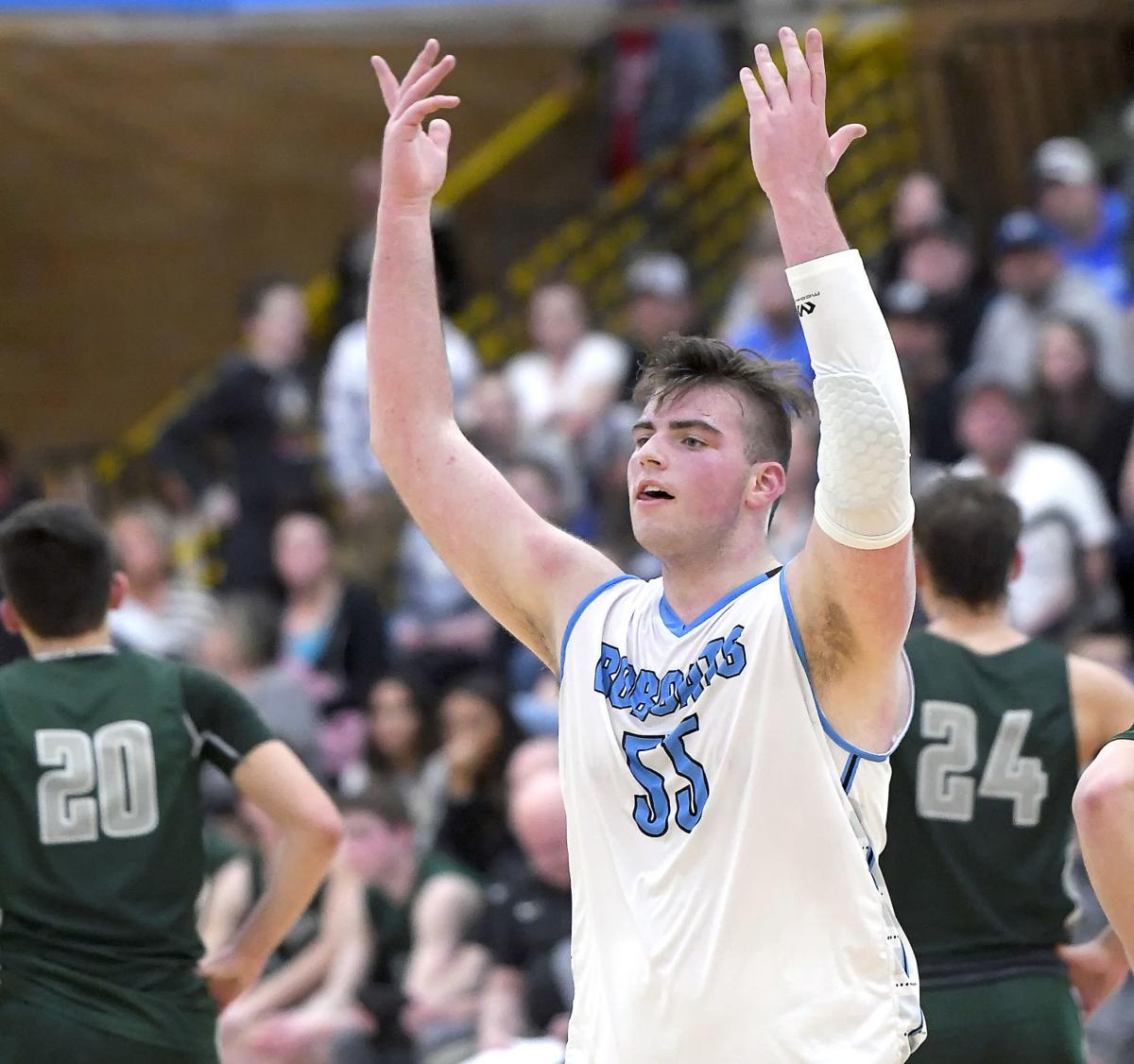 Sky View’s Kason Carlsen steals the ball from Green Canyon’s Cole Deboard on Wednesday in Smithfield. To view more photos from the game, go to hjnews.com.

SMITHFIELD — A tough loss to Ridgeline last Friday night handed the Bobcats their first region loss of the season.

And, for two-and-a-half quarters on Wednesday night, it looked possible that Green Canyon could make that two consecutive losses as the regular season wraps up. However, Sky View’s bench was unmatched Wednesday night and, in large part, was the catalyst to a 47-point second half en route to a 66-50 win.

“When called upon they were ready,” SV head coach Kirk Hillyard said of Evan Hall and Kason Carlsen. “Our size is tough to contend with and those guys were ready to go when called upon, and I’m proud of them. They deserve a lot of credit for the way that we had success tonight.”

Hall, a junior forward who typically gets limited minutes, led the team with 16 points on near-perfect 8 of 9 shooting from the floor. Carlsen was also efficient in his minutes, scoring 12 points and missing just two of eight shots.

The third quarter was a battle, much the same as the first two quarters, with both teams trading baskets all the way through. For Sky View, this is where the bench stepped up and shouldered a lot of the scoring load, most of which came down low and in transition.

For Green Canyon (11-10, 4-5), guard Mckay Yorgason took over as Cole Deboard started to slow down a bit. Still, the Wolves relied heavily on the outside shot to get their offense going.

At 37-32 with 2:19 left in the third quarter, the game looked to turn slightly. Moments later, Sky View star Mason Falslev unleashed a ferocious block on a Green Canyon player, springing Sky View (17-3, 8-1) into transition. Hall ran down the court to finish on the other end, helping to give the Bobcats a 40-36 lead heading into the final period.

“We were able to (transition) tonight in the second half, and Taydem (Neal) and Kasen brought it rebounding and then Mason (Falslev) had a bunch of rebounds, so we could push the ball a little bit,” Hillyard said. “And we got some easy open shots.”

Green Canyon came to Smithfield and put up an admirable fight against Sky View through three quarters, but the fourth belonged solely to the home team.

The Bobcats outscored their opponent 26-14 in the final period to secure a comfortable victory. Hall’s and Carlsen’s contributions were much-needed 16 points to propel the team to a victory on a night that Falslev and Sam Phipps combined for just 17 points.

Hillyard made mention that Falslev was dealing with some kind of sickness on the night and, although he never took off scoring, he still pitched in with 13 points, seven rebounds and six assists.

“He played four quarters, bunch of rebounds, bunch of assists and scored a couple times in the fourth quarter to help push our lead out. But he was super patient tonight and found teammates when they were open,” Hillyard said. “He celebrates that as much as he does a basket. So I’m proud of him and his efforts and his leadership. We just gotta keep it rolling,”

Sky View set the tempo scoring right from the jump, but thanks to the Wolves limiting how often Mason Falslev could get his hands on the ball, it took nearly four minutes before the Bobcats capped off an 8-0 run. That’s when Green Canyon’s senior leader Cole Deboard hit a long three to break the scoring draught.

In what was most likely a tactical move, Green Canyon head coach Dan McClure started Jacob Lundin over normal starter Cade Deboard. It paid off early in the game as Lundin was tasked with guarding Falslev and did an admirable job at limiting his touches through some pesky defense.

Through all of that, Sky View still ended the first quarter up 11-6 and in the driver’s seat. But another slow start in the second quarter gave Green Canyon room to get into a scoring rhythm, primarily through Cole Deboard — really almost exclusively through him. But he didn’t have nearly the same impact in the second half, which allowed Sky View to gain its footing and turn the game around.

“Middle of the third, end of the third when we got a couple stops in a row there we locked down a little bit defensively,” Hillyard said. “I think Cole (Deboard) got a little tired and they took him out, and that allowed up to clamp down a little defensively and push the ball and get some easy ones. That seemed to be when things shifted a little bit.”

Ridgeline (15-6, 8-1) held Mountain Crest (1-20, 0-9) scoreless in the first quarter and limited the hosts to just 15 points in the first three quarters en route to sweeping the season series. Meanwhile, the Riverhawks were consistent offensively as they netted 12-14 points in every quarter.

“Started off with a solid defensive effort and maintained that throughout the game,” RHS head coach Kyle Day said. “Offensively, we were really balanced. Now (we’re) trying to use the quick turnaround and get ready for Logan.”

Jackson Baker led the Riverhawks with 11 points, while Peyton Knowles, Jacob Salvesen, Kaden Cox and Kaleb Smullin chipped in with seven apiece. With the win, Ridgeline kept pace with Sky View atop the region standings.

Marshall Nethercott finished with a game-high 14 points for the Mustangs.

“Bear River is a good team,” LHS head coach Logan Brown said. “We did a great job of guarding Huber and Fonnesbeck, but their other guys beat us. We played together and gave ourselves a chance, but didn’t finish when we could have.”

Preston missed nine straight free throws in the second quarter and struggled with turnovers at times, yet still managed to rally past Burley, the second-place team from its district, on the road. In the process, the Indians (19-1, 12-0) swept the season series with the Bobcats (14-6, 9-4) and increased their winning streak to 15.

Gabe Hammons scored the first six points in the fourth quarter to give Preston a 42-36 lead it wouldn’t relinquish. Hammons also had an outstanding hustle play in the third quarter that resulted in a basket by teammate Ty Hyde and helped give momentum to the visitors.

The Indians knocked down 13 of 17 three throws in the fourth quarter to preserve the win. Hyde paced Preston with 22 points, Cooper Hobson netted 11, Hammons nine and Cole Harris eight.

“In the last 10 years, I think we’ve only won here three of four times and the times we have it’s been by a couple points,” PHS head coach Tyler Jones said. “This is just a tough place to play. They have a good program, they’re a good team. And tonight, the first half we didn’t come out with a lot of energy. We came out flat and you give a team hope and confidence, then you’re playing with fire.”