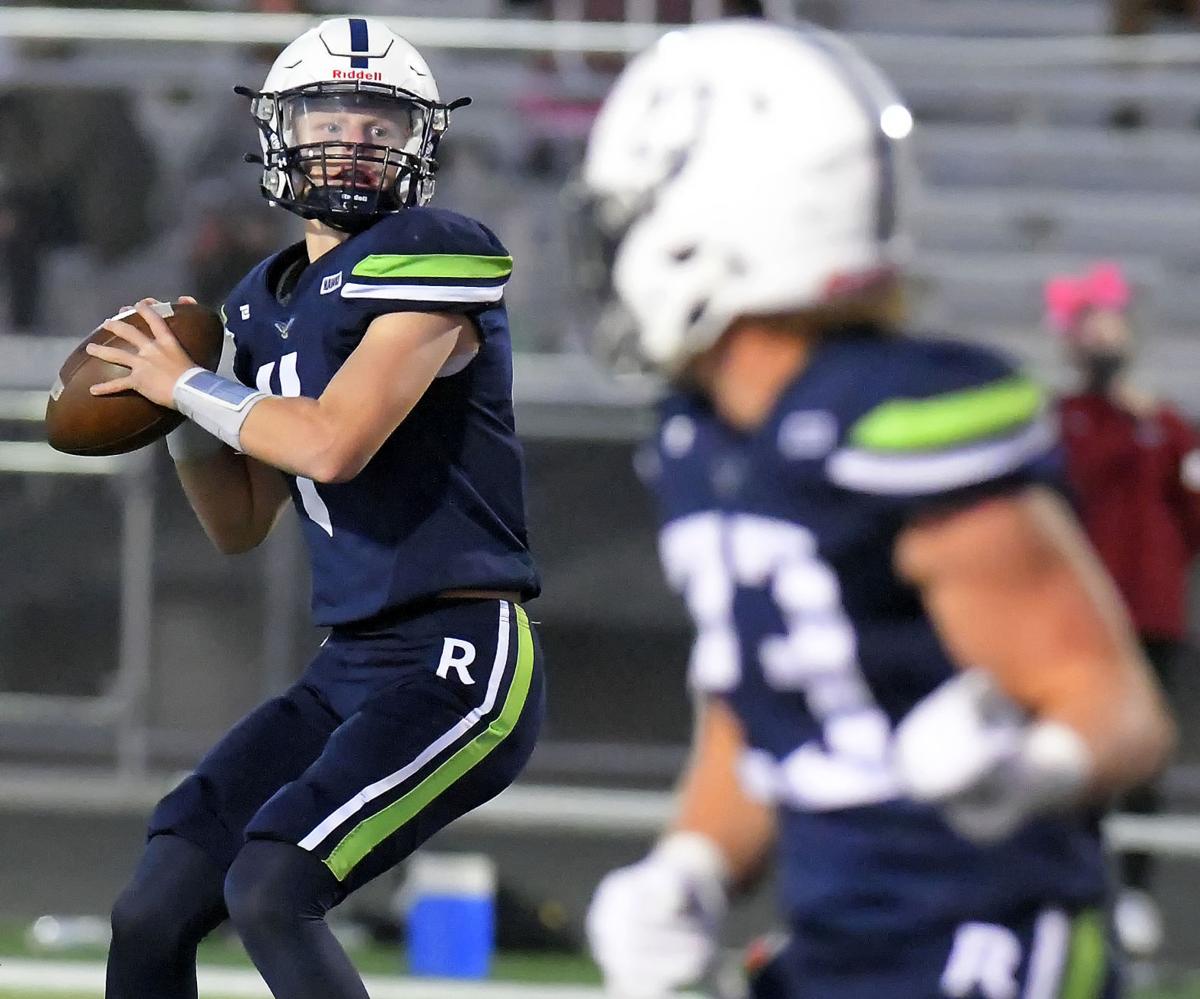 Ridgeline quarterback Kaden Cox looks to throw the ball against Cedar Valley on Friday in Millville. 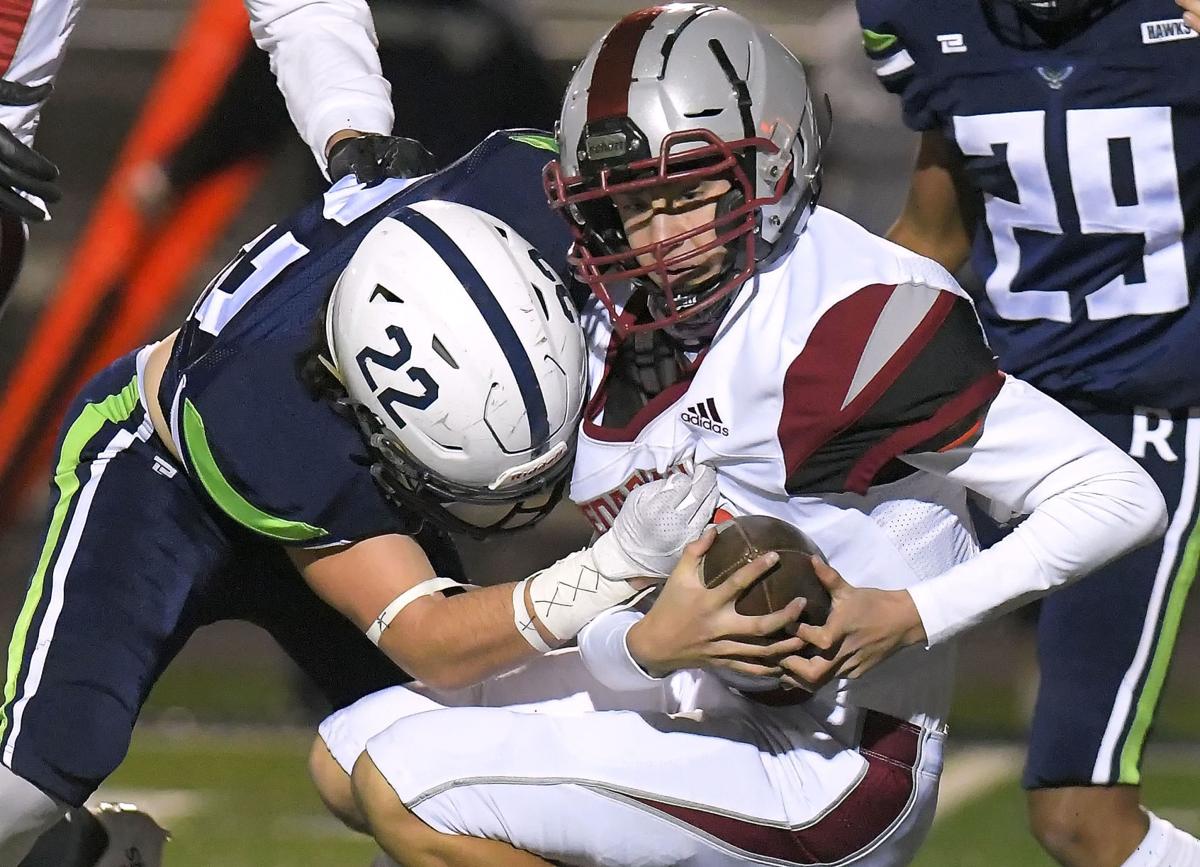 Ridgeline quarterback Kaden Cox looks to throw the ball against Cedar Valley on Friday in Millville.

The first three drives of the game for Ridgeline ended with trips in the end zone, including a 94-yard drive for the third score. By the end of the first quarter, the hosts held a 22-0 lead.

This offensive display was not solely down to the skill position players and linemen as the Ridgeline the defense stopped Cedar Valley on all four of its opening drives, forcing three-and-outs on each occasion. The defense was playing fast. Closing down running lanes, getting to the quarterback to put pressure on his throws, there was hardly any time for quarterback Payton Weber to breathe in the opening frame.

“We came out and wanted to be aggressive early and set the tempo, and I thought we did a good job there,” Ridgeline head coach Travis Cox said.

Despite the slow start, Cedar Valley started to string some drives together and even stopped Ridgeline on third down, which forced a punt. It was slow going for both teams in the second quarter, with neither running at its full potential, and the first touchdown didn’t come until nearly eight minutes into the second period. Running back Noah White broke a 10-yard run for his second of three touchdowns on the night, which gave the Riverhawks a 29-0 lead.

But No. 13 Cedar Valley (6-5) struck back quickly with a 75-yard touchdown drive, putting a cap on an improved quarter.

“We kind of let off the gas end of the second quarter, so we had a good talk at halftime about playing hard all the way through,” Cox said.

The talk must have made an impact because Ridgeline was right back to being potent on offense, and held Cedar Valley scoreless in the third quarter as well. Kaden Cox — who’s become a rising as a dual-threat quarterback option in the state for the 2022 recruiting class— contributed on all three Riverhawks’ scores in the frame, throwing two and rushing for a third.

Just as the defense was playing fast, so too was the offense. Ridgeline (8-1) often mixed three to four running backs and incorporated a lot of motion into its plays, keeping the defense guessing and on its toes. Until the Riverhawks shut it down late in the game when it had a sizable lead, the run to pass ratio was fairly similar, really only passing when in long third downs or to keep the tempo of the offense fast. Fans of the old Oregon offense in the early 2010’s — or even recent Utah State offenses under Jordan Love — would appreciate the quickness and effectiveness that Ridgeline achieved on that side of the ball.

However, this isn’t the only key to a successful team, according to their head coach.

“We’ve always preached just being a good team,” coach Cox said. “A good team is good on defense, good on special teams and good on offense, and I feel we do a pretty good job in all those areas.”

The fourth quarter was virtually unimportant with Ridgeline being up 50-7 after three frames, and the backups came in to close out the game. Cox threw his fifth touchdown with nine minutes left, then backup quarterback Jackson Olsen rushed for a score of his own just a few minutes later. Cedar Valley scored with two minutes left, but that made little difference in the grand scheme of the game.

With a victory Friday night, Ridgeline guaranteed another home game the following week as the No. 4 seed in the 4A playoffs. The matchup will be against No. 5 Park City, which thumped No. 12 Ogden, 51-12. The Miners made the championship game last season, where it lost to Sky View.