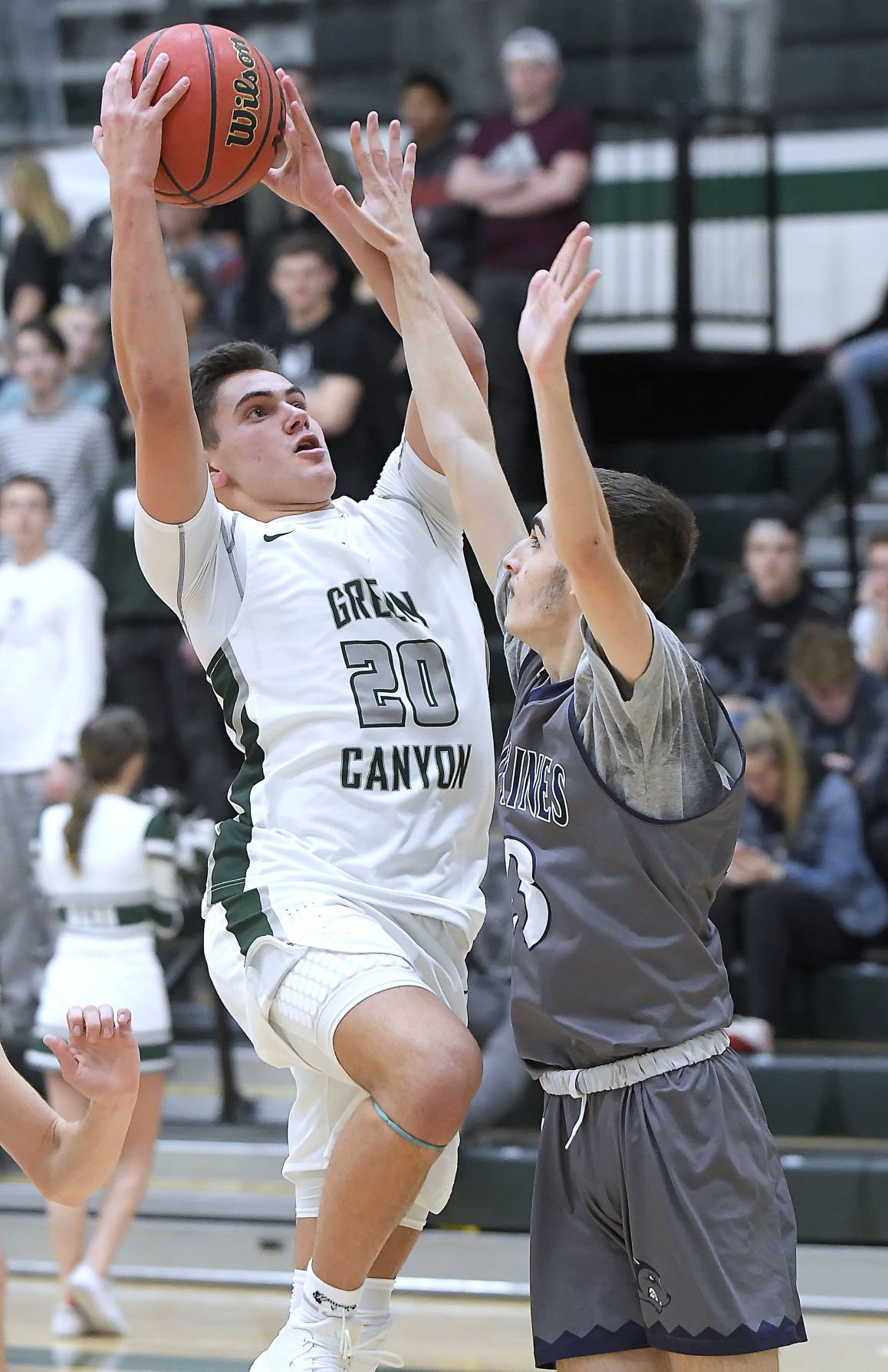 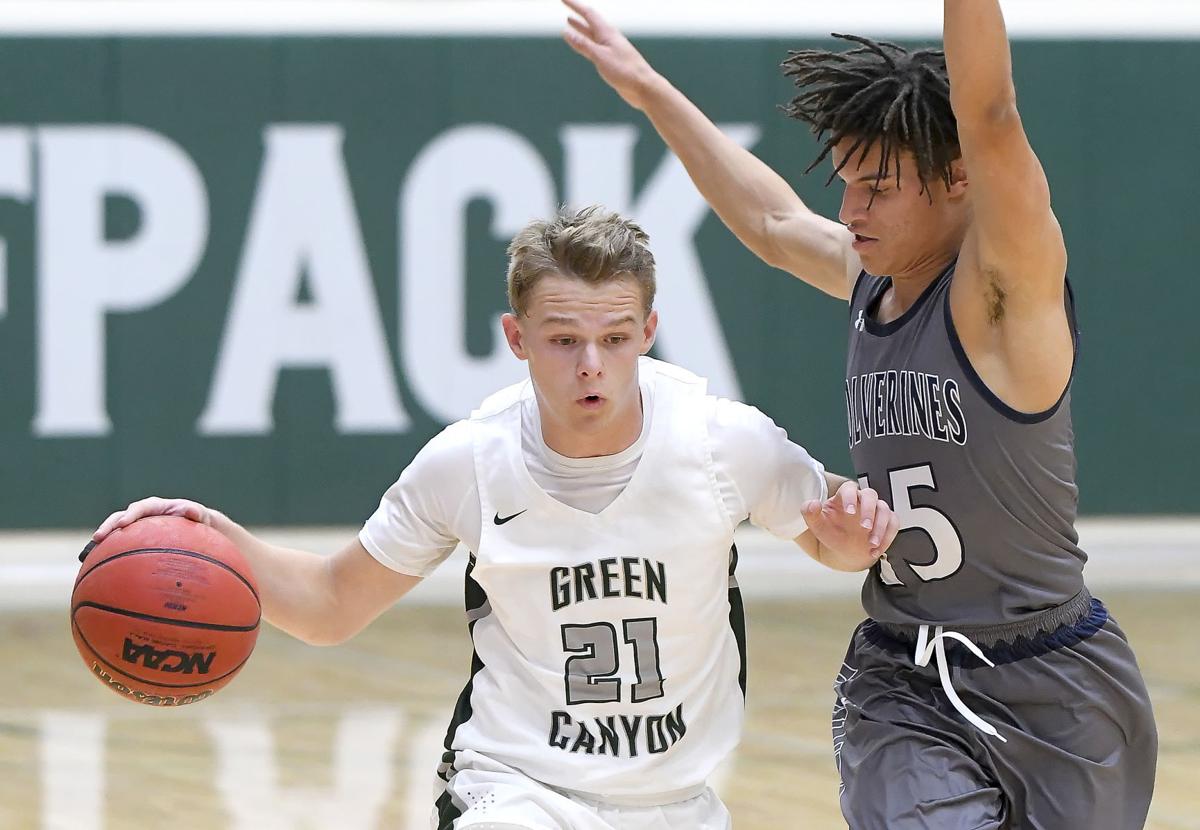 NORTH LOGAN — A complete team performance by the Green Canyon boys basketball team led to a 67-57 victory at home against the Hunter Wolverines,

The balanced Wolves were led by four scorers in double figures and a fifth player with nine points.

The Deboard brothers stole the show on the night, both ending with 13 points and coming up with clutch shots when the team needed a lift. Cole was the do-it-all player on the court, picking up seven assists and five rebounds, and was at the center of every offensive attack when on the court.

“Cole is fantastic for us and he is a competitor that just wants to win,” Green Canyon head coach Dan McClure said. “He passes the ball so well, he obviously can shoot it, he’s big for us on the glass.”

Cade’s impact took longer to manifest itself. The sophomore missed his first five shots of the game, but went on to finish 5 of 12 from the field. And once he got settled, he flashed some superb athleticism and determination getting to the basket and making plays for his teammates.

“I thought Cade came out and missed some shots early, but we tell him, ‘you gotta keep shooting, you’re a shooter,’ and they started to go down,” McClure said. “He got a couple at the basket and it was good for him just to see the ball go in.”

Initially, it looked as if Green Canyon would struggle with the amount of height and length the Wolverines (3-7) had, especially 6-foot-8 Jerimiah Wagstaff, who has the ability to post up inside, as well as find points from the perimeter. That didn’t prove to be a problem, however, and although the Wolves ended with a 10-point win, it wasn’t an easy task to put away Hunter, which had some high-scorers itself.

The guard play of Darius Jackson and Daisean Cash was an integral part to the Wolverines’ early success in the game. Both players finished with a team-high 15 points. Through the first three quarters the Wolves (6-3) were finding it hard to stop the pair because of the versatility they showed, and both were just as comfortable pulling up from deep as driving through the lane.

“Hunter is a good team. They’ve got some athletes that can play and I thought they were really good today,” McClure said. “We talk about we want to decide what they get offensively, which I didn’t think we did a very good job (of) in the first half. I thought they were a little too comfortable.”

The scoring went back-and-forth for nearly the entire contest, but Hunter’s two-headed attack couldn’t overcome the amount of scoring Green Canyon brought to the court. In addition to the Deboard’s 26 points, Mckay Yorgason and Caleb Robison both chipped in with 12 points each. Yorgason also pulled down six boards and dished out four assists.

Playmaking was not a foreign idea to the Wolves on the night. Of the team’s 27 made field goals, 16 of those buckets were assisted, with Cole Deboard leading the way. This concept of total-team play is one the Wolves work on consistently and the coaching staff uses to their advantage.

“It’s something that we have always preached because we are fortunate enough to have lots of really good players. We’ve got to move the ball and we are really hard to guard when the ball moves because we can all shoot it and can all drive it,” McClure said.

Green Canyon is back in action on Thursday for a trip to Idaho to play the Rigby Trojans (7-3) before getting into the heart of league play the following week.

The Riverhawks refused to have their season derailed by an 0-4 start as they have since extended their winning streak to six. Ridgeline went 2-0 on the second and final day of the Juan Diego-hosted Eagle Holiday Shootout.

Ridgeline (6-4) played Summit Academy on Tuesday morning and rolled to a 54-28 win. The Riverhawks outscored the Bears in every quarter and never gave up more than nine points in any of them.

Kaden Cox drained four 3-pointers and finished with a team-high 14 points for the Riverhawks, who got 10 points from Jacob Salvesen and nine from Jackson Baker.

Ridgeline returned to action in the afternoon and thumped Granger 76-62 in a matchup that wasn’t as close as the final score indicated. The Riverhawks poured in at least 19 points in each of the first three quarters.

“In the Granger game, we shot the ball well, making 13 threes — seven between (Kyler) Hansen and Cox,” Day said. “It was an 11-point game at the half, but we picked it up defensively in the third quarter and stretched it out to a 28-point margin at the end of the three. The boys are playing unselfish and connected basketball right now, and it starts on the defensive end.”

Cox netted 13 of his team-best 16 points in the third quarter. The Riverhawks had three other players score in double figures in Baker (15), Peyton Knowles (12) and Salvesen (10), while Hansen and Chase Hall combined for 17 points.

Ridgeline has won five of its games by 14 or more points during its aforementioned winning streak.