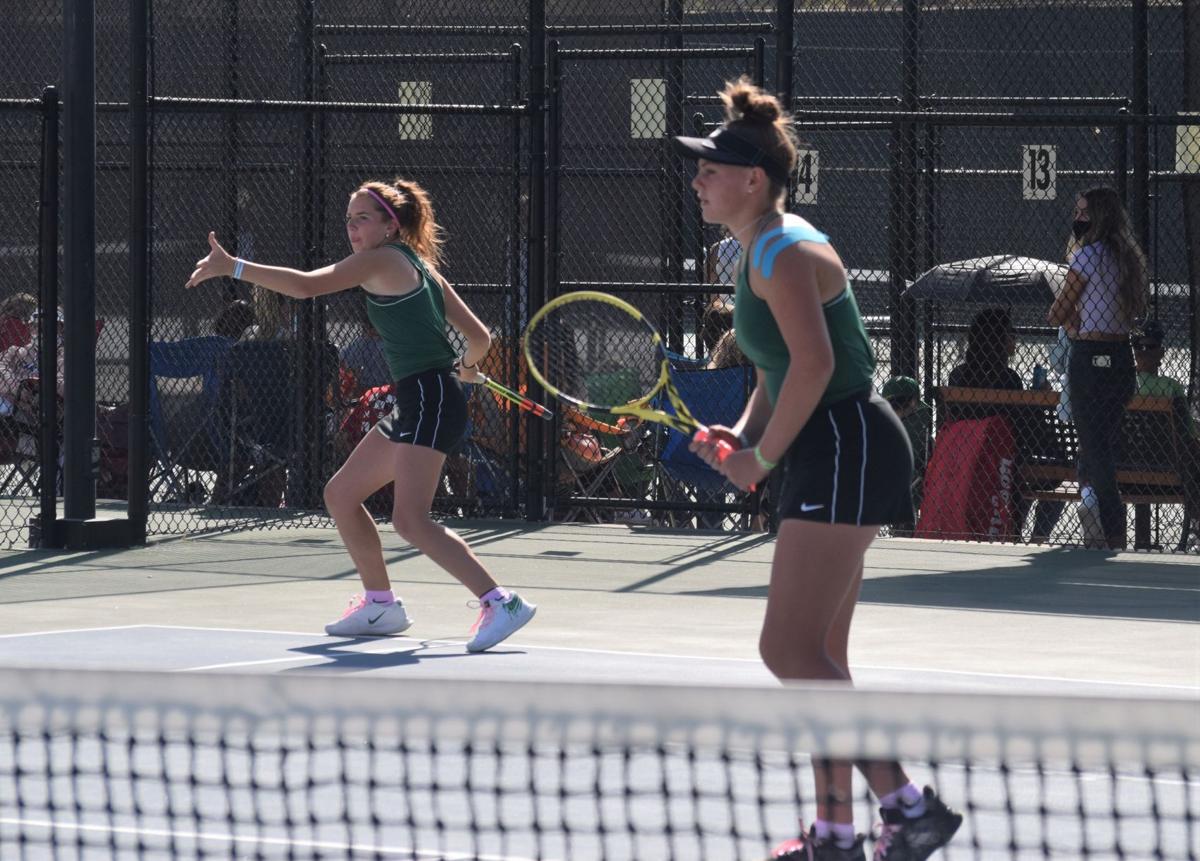 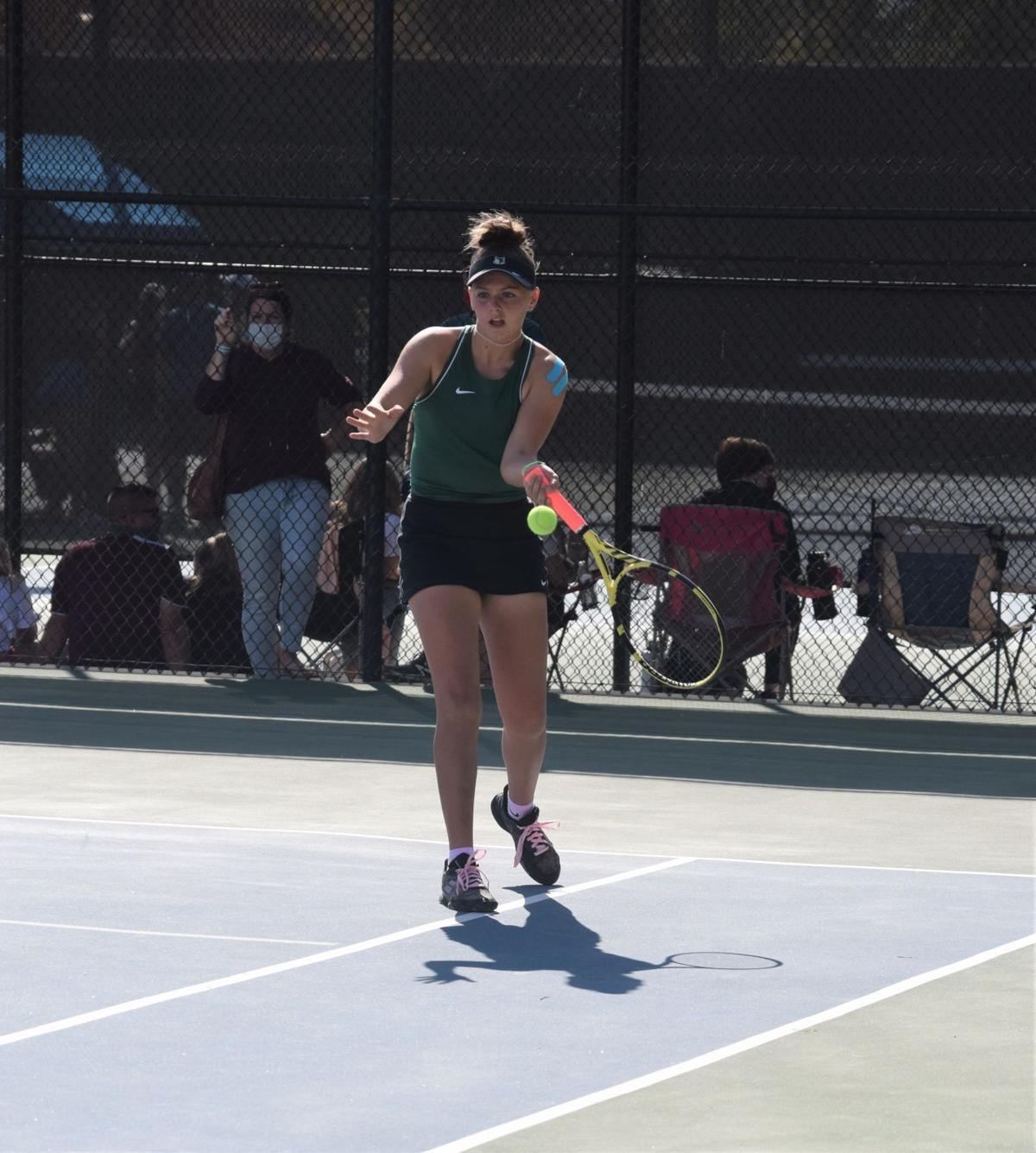 It’s been a banner season for Green Canyon’s girls tennis program, and it culminated with a historic win.

Kate Anderson and Maren McKenna didn’t lose a set en route to capturing the state title at second doubles at the 4A tournament, which concluded last Saturday at Salt Lake City’s Liberty Park. It’s the first time the Wolves have won an individual state championship, girls or boys.

“Yeah, it’s awesome,” Anderson said. “There’s been a lot of work that has gone into tennis for the whole team. We’ve all put a lot of hard work into it, so it feels really good to be able to cap off my high school tennis career with a win.”

That victory allowed Green Canyon to hold off Ridgeline and place third in the final team standings. Crimson Cliffs held off defending champion Desert Hills, 23-20, while the Wolves and Riverhawks finished with 12 and nine points, respectively.

“I feel awesome about our season,” said GC head coach Holly Haslem, whose team went 10-0 in Region 11 duals and won the region tournament. “I really just came into the season hoping to do really well at region. That was really our focus was to do well at region, so to do as well as we did at state was just an incredible bonus.”

The Wolves went 5-0 in the first round of the tourney and 3-2 in the quarterfinals to put themselves within striking distance of Region 9 powers Crimson Cliffs and Desert Hills. Likewise, the Riverhawks were able to advance three of their positions to the semifinal round.

It’s also been a memorable season for the Riverhawks, who still proved they are one of the best programs in 4A, despite losing legend Naya Tillitt to graduation and one of their best players to a rival school. Tillitt won her fourth straight state title at No. 1 singles a year ago and is the most decorated prep tennis player to ever come out of Cache Valley.

“I think overall it was a good season for (us),” RHS head coach Ryan Cheney said. “We lost some good players, which is always hard as a coach, but the girls showed how hard they were willing to work to be competitive both at the region and state level, and it showed throughout the whole season. It was fun seeing each girl progress as they set goals and worked toward them. Our doubles teams especially developed good chemistry and I am proud of how well they did at state.”

Ridgeline had an opportunity to crown at least one positional state champion for the fifth consecutive year as its second doubles tandem of Lauren Ellis and Kaitlyn Horsburgh made it to the finals. Horsburgh and Ellis gave Anderson and McKenna their best match of the tournament before falling 6-2, 6-4.

It was the fifth time this season the Wolves and Riverhawks squared off at second doubles, although the lineup wasn’t always the same.

“It was very fulfilling because we had lost to them in region play, and the fact that we turned it around and beat them at (the) region (tourney) and at state just felt really, really good,” McKenna said. “You could tell they were definitely coming out ready to beat us at state, so it felt great.”

McKenna and Anderson earned their spot in the finals by dispatching of Logan’s Staeli Ellis and Norah Perry, 6-1, 6-2, in the semifinals. The No. 2 doubles position was dominated by athletes from Region 11 as the region went 5-0 in the first round of the tourney and had three of the four semifinalists.

Ellis and Horsburgh earned another shot at Green Canyon’s duo by prevailing against Region 9 champions Taylee Anderson and Brooklyn Price of Desert Hills, 7-6, 6-2, in the round of four.

“We had a very good region this year,” said Anderson, who is one of two seniors on Green Canyon’s varsity squad. “There were a lot of really good matches that went on and I think it really helped push us to the next level to be able to make it all the way through state.”

Haslem praised Anderson and McKenna for how well they complemented each other this season. Indeed, the duo showcased great chemistry throughout the fall — something the Wolves exhibited in general.

Region 11 also fared well at first doubles as it went 4-1 in first-round matches and 2-2 in the quarterfinals. It was nearly an all-Region 11 semifinal round as Mountain Crest’s Kate Hardy and Brook Clark, and Bear River’s Shannon and Carisa Epling each lost in three sets to the eventual finalists.

Hafen and Wunderli went on to beat Wittwer and Hartman in straight sets in the championship round. Crimson Cliffs also captured state titles at first and third singles, while Tia Turley of Desert Hills defended her crown at second single.

In addition to the aforementioned players, the Wolves and Riverhawks were represented in the semifinals by their competitors at No. 3 singles. Green Canyon’s Ava Checketts lost to Camryn Stanger of Crimson Cliffs, 6-1, 6-2, while Ridgeline’s Myriam Anderson tested Region 9 champ Malika Maxwell of Desert Hills before falling, 6-3, 6-4. Stanger routed Maxwell 6-0, 6-2 in the finals.

Region 11 was also represented in the semifinal round by Bear River’s Erika Olsen, who lost to eventual champion Taylor Parsley of Crimson Cliffs, 6-0, 6-2. Parsley was dominant as she only dropped four games in the championship round.

Indeed, it was a good tournament for Region 11, which led the way with five teams in the top 10 in the final standings. Mountain Crest tied Ogden for fifth place with four points, while Bear River and Logan were part of a four-way tie for seventh.

“I am incredibly proud (of our region),” Haslem said. “... I’ve coached for the last four years and to watch our region really grow has just been incredible. I think we’ve just gotten more and more competitive. ... (My team) more than doubled (the amount of points) we got at state last year and I attribute a lot of that to how competitive our region has become.”