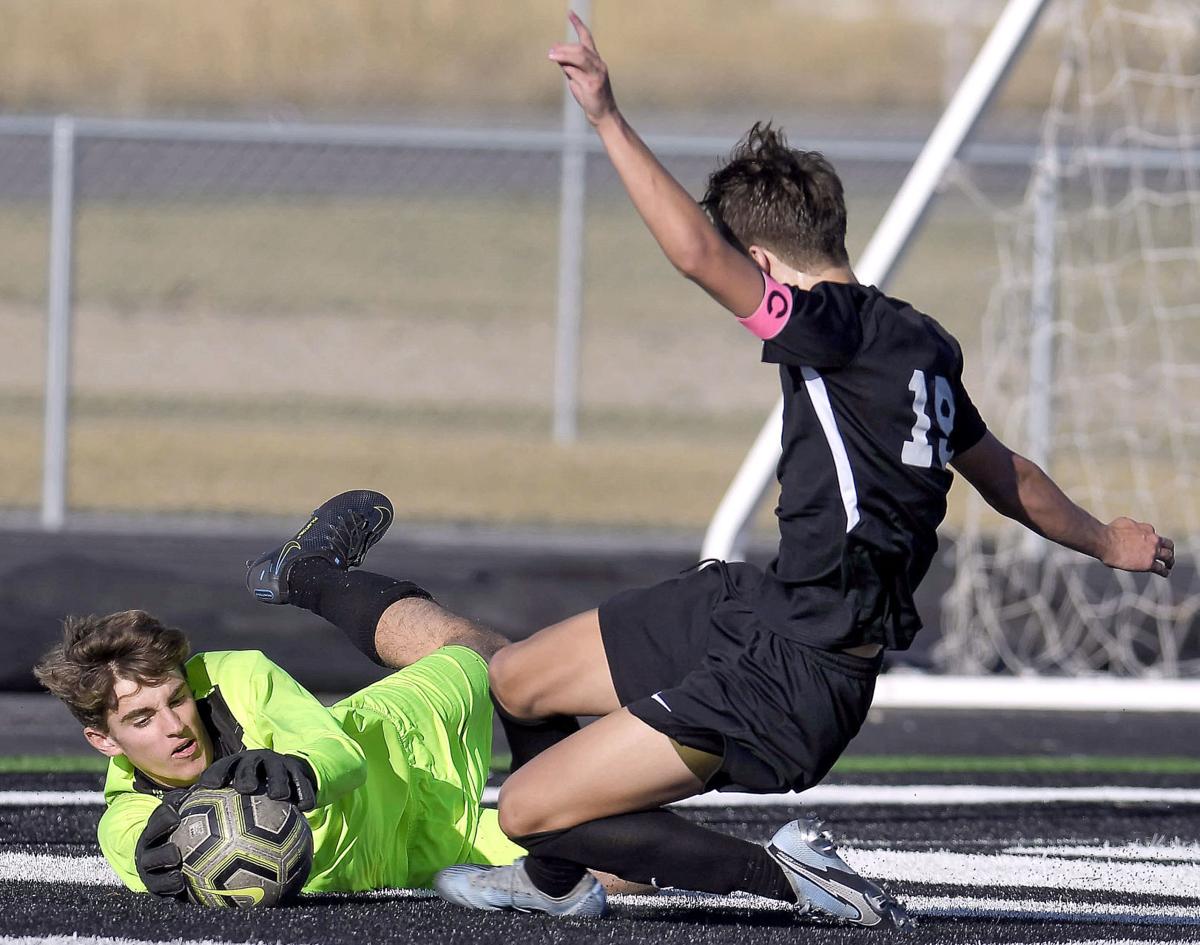 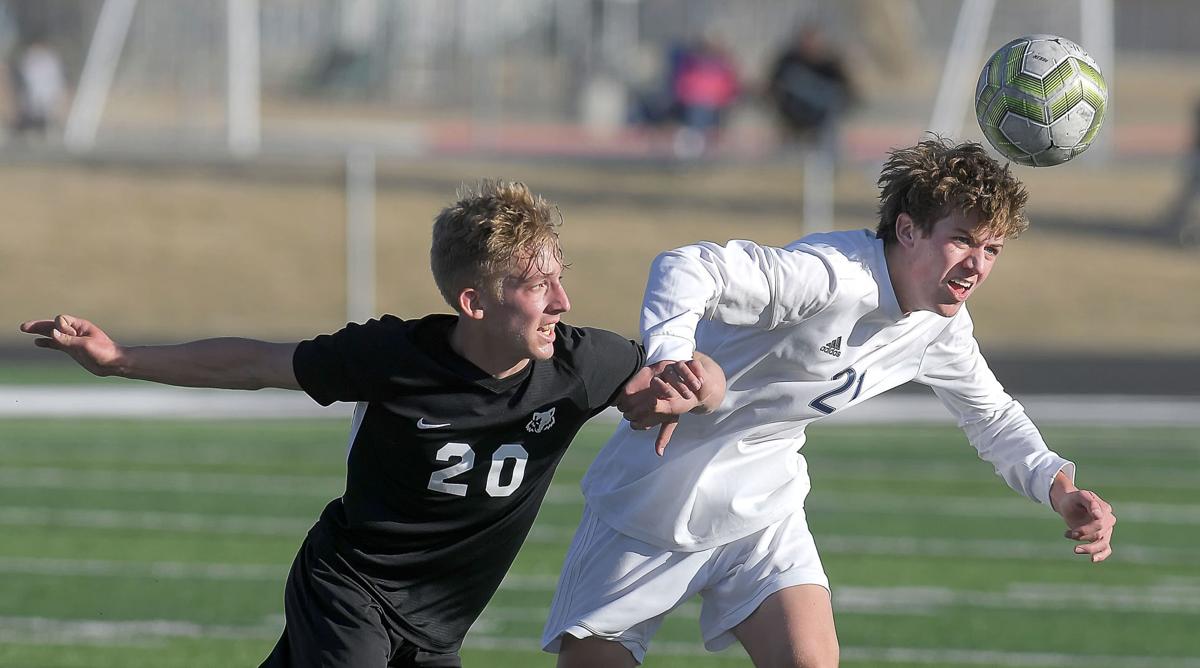 NORTH LOGAN — Jake Von Nedierhausern took his place on the goal line. Behind him, the scoreboard showed 29 seconds left in the game, his Green Canyon Wolves up 3-2 on the best 4A team in Utah according to MaxPreps.

In front of him, 12 yards away, the ball sat on the penalty spot. Not far from it, Mountain Crest forward Gideon Newman waited for the chance to tie the game and likely send the Friday night match into overtime.

This would be the senior goalkeeper’s chance to make things right in the game. The sure-handed Wall of North Logan had five shutouts this season for a team that owned the best defense in 4A. Only it was Von Nedierhausern’s blunder in the first half that gave Mountain Crest its first goal, ending the prospect of a sixth clean sheet. A second goal allowed on a corner kick had given MC a first-half lead.

“I had to redeem myself,” Von Nedierhausern said.

His teammates had done the work to come back and build a 3-2 this far into the second half. Now it was time for that redemption.

Von Nedierhausern didn’t know much about Newman — one of a pair of Newman brothers on MC — since the Wolves don’t scout opposing teams prior to matches. All the keeper could do was try to get in the penalty kicker’s head and make a read.

Newman approached slowly, deliberately, and Von Nedierhausern read it the whole way; the run-up, the feint and closing of the hips as Newman faked to keeper left and kicked keeper right.

Von Nedierhausern dove perfectly, blocking the shot and cradling the ball against his stomach in a fetal position.

“Big-time save,” GC head coach Sven Rasmussen said. “We knew he was capable of that kind of stuff. I’ve seen him do it several times. But to do it in a pressure situation, it’s awesome.”

One hundred yards across the field, MC’s keeper, Isaac Britt, watched as a swarm of black shirts surround the neon green-clad opposing keeper. It’s a moment that could have been his but, in his mind, he was robbed.

Early in the second half, with the game tied 2-2, the Mustangs (7-2, 2-1) were called for a penalty. Porter Cragun stepped up to the spot for the Wolves. Britt read the run-up and the feint and dove left, squarely in front of the ball, and blocked it. Only unlike his GC counterpart, Britt didn’t keep the ball clutched in his stomach.

The ball spilled in front of the goal just out of arm’s reach. Britt dove for the ball, felt the polyester through his gloves but at that same moment, Cragun’s foot found the ball and blasted it into the back net.

Britt, livid, ran to the referee pleading his case that he had both hands on the ball which, if true, meant Cragun’s tiebreaking goal should not have counted.

“I felt like I got my hands to the ball first,” Britt said. “I’ve reffed soccer games and the rule is, if the keeper has as much as a pinky on the ball then you have to call it back.”

For several minutes, Britt plea fell on deaf ears. And as the final seconds ticked off the scoreboard, Britt still felt the pain from a no-call that left him empty-handed.

“I let my passion get to me, I let my anger out,” Britt said. “I probably yelled more than I should have, and I regret that. But I think it’s really BS and I’m still pissed about it. It was a definite foul and it cost us the game.”

On top of giving up the lead again, that goal cut down any momentum Mountain Crest had built in the first half. The Mustangs had for a moment with their two-goal burst late in the first half, forced the Wolves (7-2, 2-1) out of their comfort zone. Under Rasmussen, Green Canyon has allowed multiple goals just twice in the last two seasons prior to Friday, and they lost both times.

“It was just a little mental lapse,” Rasmussen said. The consequence of that lapse according to the head coach is that the game “could’ve turned ugly easily in a variety of different ways.”

The Wolves rebounded from that mental lapse by getting back to their defensive roots. In the second half, Mountain Crest managed just one shot outside of the penalty kick at the end of the game. Oliver Thompson, the leading scorer in Region 11, was held to two shots all game.

“It’s just sticking to our defensive game plan,” Rasmussen said. “We really harp on doing things defensively a certain way and give the boys some freedom in the attack.”

Mountain Crest head coach Justin Beus said his team “made it hard for ourselves the second half” offensively, but also credited Rasmussen’s defensive strategy that stymied them most of the game.

“We usually combine through the middle and then attack, but they had so many guys in the midfield that we had to counter what they were doing,” Beus said. “We tried to bypass the midfield, but at the end of the day they were better.”

Ethan Green headed in a lengthy free kick by Jackson Hulse in the 26th minute for the Riverhawks (5-4, 2-1). Riley Garvart earned his third shutout of the season in goal for Ridgeline.

“You have to have a complete performance to compete with this Sky View team,” RHS head coach Dale Buchanan said. “Their coaches always put together a great team and game plan. We ended up with consistent team play and barely edged out a great team. Riley Garvart and this defense played well together to keep chances to a minimum, although Sky View had a good deal of close misses on goal.”

Meanwhile, Udy Marquez scored the first Logan goal and assisted on Sidon Abai’s game-winner in the second half. Marquez’s equalizer was assisted by Luke Mitchell.

“I was so pleased with how we played today,” LHS head coach Natalie Norris said. “We finally saw things start to click and we were able to play as a team. I’m excited to build off this game and start putting a few more in the back of the net.”