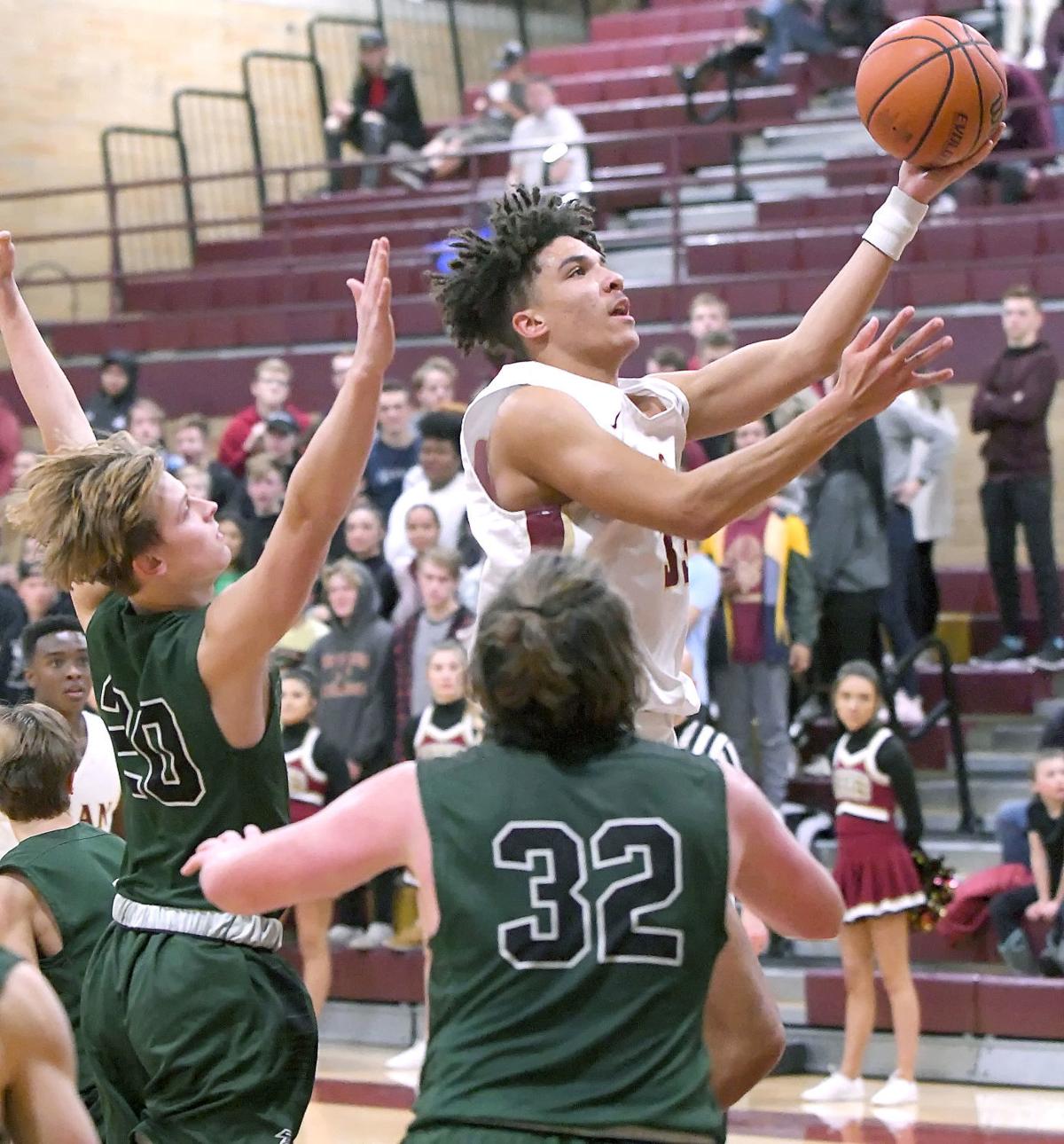 Logan’s Jadin Penigar takes a shot as Clearfield’s Dylan Barnes (20) and Zachary Gravely (32) defend on Wednesday in Logan. To view more photos from the game, go to hjnews.com. 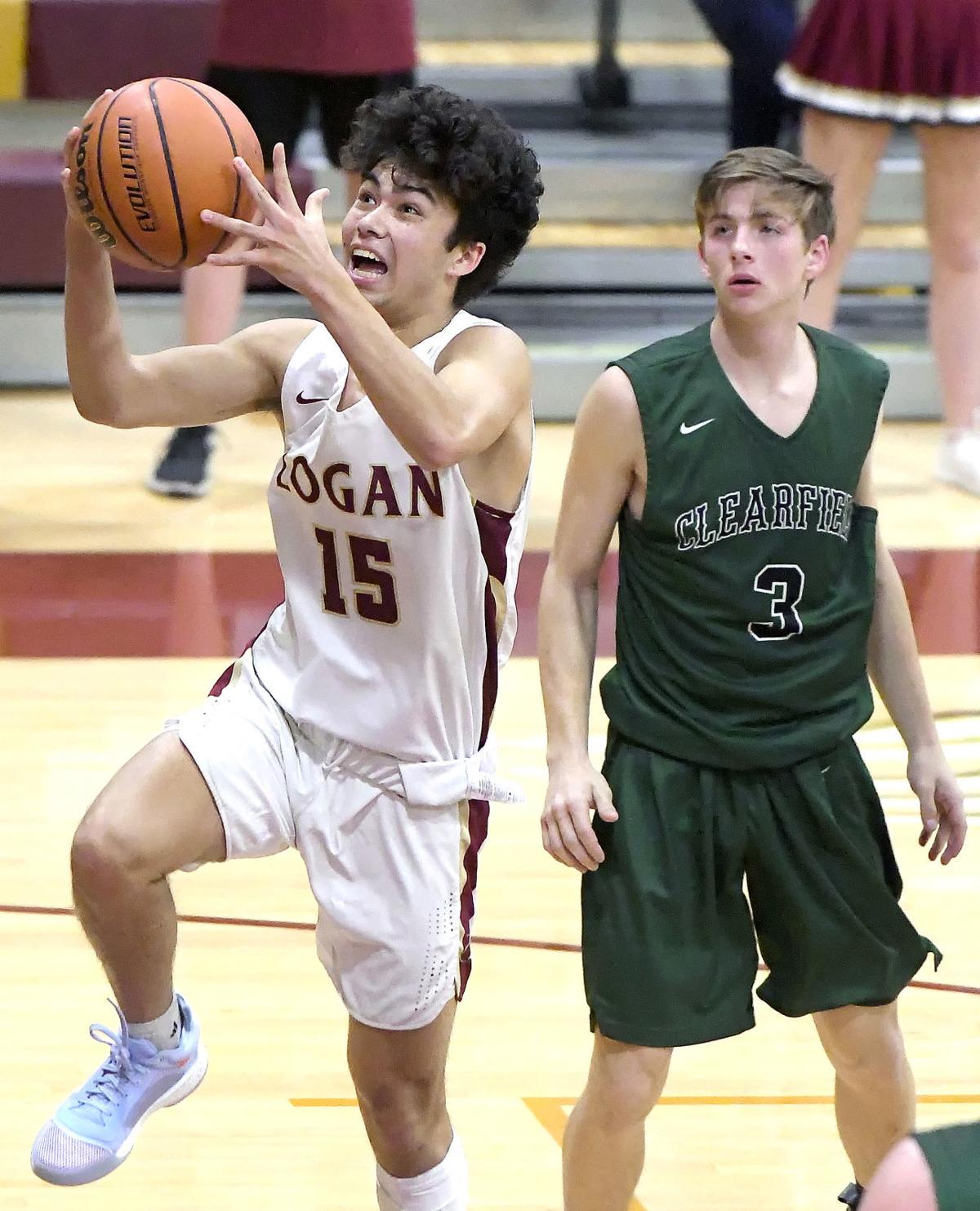 Logan’s Jadin Penigar takes a shot as Clearfield’s Dylan Barnes (20) and Zachary Gravely (32) defend on Wednesday in Logan. To view more photos from the game, go to hjnews.com.

While Logan High led for the majority of the game, a floater from Clearfield High’s Grayson Banks as time expired sent the Falcons home with a 46-44 win Wednesday night.

The loss is the third consecutive for the Grizzlies after defeating Bonneville 50-45 in the season opener just one week prior.

Scoring came at a bit of a premium for both teams on the night, registering a combined points total of just 28 at the halftime break. For the Grizzlies (1-3), there were opportunities to score on the perimeter, but Clearfield (2-3) did well to hold them out of the paint for the majority of the game at the Logan Recreation Center.

Logan guard Issac Tuft was the recipient of a few good rotations that resulted in a free shot on the wing early in the game, opening the scoring for both schools. Tuft’s 3-point bucket started Logan on a 7-1 run in the first quarter, with juniors Jaylen Sargent and Jadin Penigar also finding the bottom of the net.

Penigar had been Logan’s primary scorer through its first three games of the season, but struggled to get it going Wednesday. He fell short of his 20 points per game average on the night, scoring just nine points on 3 of 10 shooting from the field.

The Grizzlies were able to supplement some of that scoring through Tuft — who led the team with 11 points — and junior Issac Larsen who had eight points and played with immense energy throughout the entire game. Larsen acted as a spark plug for the Grizzlies, recording four steals and lead the defensive charge, for which Grizzly head coach Logan Brown thought was the highlight of his team’s performance.

“I thought we played great defense, I really do, we just weren’t really aggressive on offense,” Brown said. “I thought Issac Larsen was a really big bright point for us, in addition to Issac Tuft, we’ll get better. It’s a preseason where we’ve got to learn and improve and that’s what we are trying to do.”

At the five minute mark of the fourth quarter, Logan slowed the tempo down drastically, maintaining the ball for nearly a minute in a single possession. This, however, wasn’t in an attempt to run out to clock according to Brown.

“We weren’t trying to slow it down, it’s just kind of the way we went about it,” he said. “It’s new territory for our young guys and we’ve got to learn from it. We’ll get better.”

Clearfield nearly doubled its score in the fourth quarter from the previous three combined. The Falcons put up 22 points in the frame, including an 11-5 run to close out the game, storming from behind when it looked like offensively there wasn’t much promise for most of the night. Banks was a key contributor in the comeback, and capped it off with an eight-foot floater from the middle of the lane that rattled around the rim and fell through the bottom of the net.

“I think really at the end, we played not to lose instead of to win, and I have got to do a better job as a coach to get our guys to understand execution and take care of the basketball,” Brown said. “If we would have done that, we would have had a better outcome.”

Fouls were just as much of an issue as turnovers were in this game for the Grizzlies, committing 17 as a team. Clearfield took advantage of its time at the line and made four key free throws at the tail end of the fourth.

Logan’s next challenge will come Friday against Rigby High School (4-0), on the road in Rigby, Idaho.

Three Cache Valley high school teams were in action Tuesday night, and all of them were unable to overcome sizeable halftime deficits.

Isaac Tuft drained four 3-pointers and finished with a career-high 16 points for the Grizzlies (1-2), who got eight points apiece from Jadin Penigar and Jaylen Sargent.

A very good Layton team dominated Ridgeline in the second quarter and never looked back in its 81-57 victory at home. The Lancers (4-0) outscored the Riverhawks (0-4) 26-2 in the quarter.

Kaden Cox knocked down five treys en route to netting 22 points for Ridgeline, which got 13 points from Peyton Knowles.

“Actually won the first (quarter) 21-14, then Layton cranked up the pressure and reall worked their post game,” RHS head coach Kyle Day said. “The boys battled hard and with a lot of energy.”

Mountain Crest was outscored 17-4 in the opening quarter at home by Tooele (2-2) and never fully recovered in their 56-39 loss. The Buffaloes extended their lead in every quarter except for the fourth

For the first time this season, Marshall Nethercott didn’t pace the Mustangs (0-4) in scoring. Nick LaFevre netted a team-high 13 points.