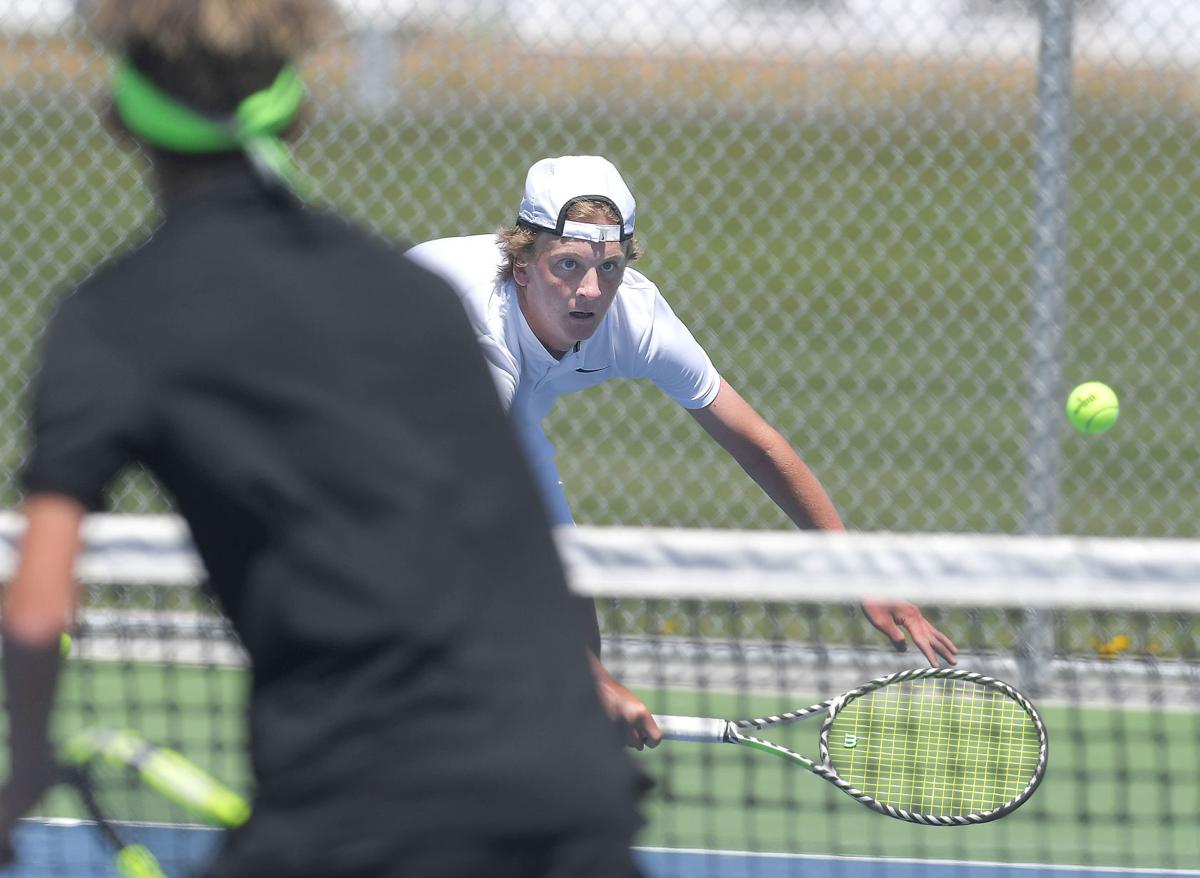 Logan’s Paul Miller returns the ball during his singles match against Ridgeline’s Davis Low at the Region 11 tennis tournament on Thursday in North Logan. 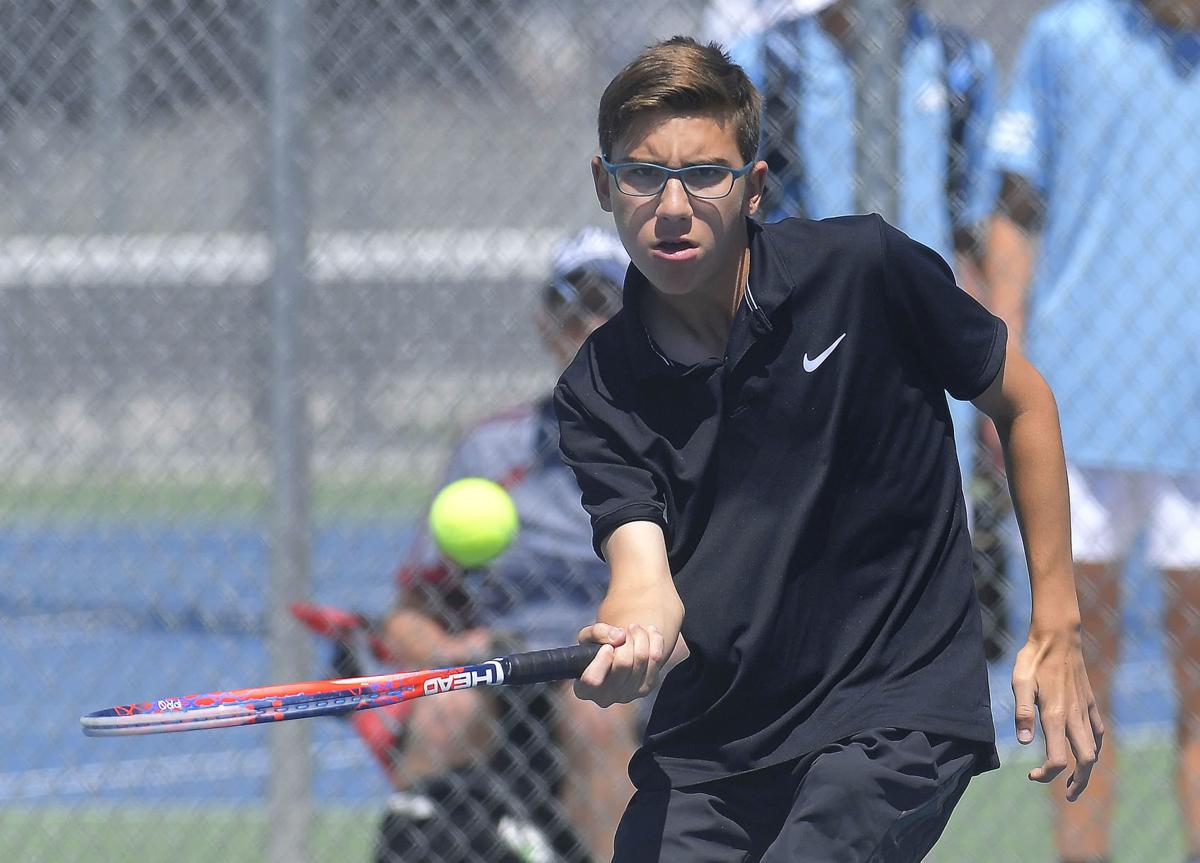 Ridgeline's Thatcher Ellis returns the ball during his singles match at the Region 11 tennis tournament on Thursday in North Logan.

Logan’s Paul Miller returns the ball during his singles match against Ridgeline’s Davis Low at the Region 11 tennis tournament on Thursday in North Logan.

Ridgeline's Thatcher Ellis returns the ball during his singles match at the Region 11 tennis tournament on Thursday in North Logan.

NORTH LOGAN — Thanks to COVID-19, the Grizzlies had to wait much longer than they originally anticipated to defend their region title, but they certainly made up for lost time.

The 2019 champions have passed every test with flying colors so far this spring, and they deftly fended off another strong challenge from Green Canyon and Ridgeline. A strong semifinal round helped propel Logan past its rivals at the Region 11 Boys Tennis Championships, which concluded on a balmy Thursday afternoon at Green Canyon High School.

Logan advanced four of its five positions to the championship round en route to racking up 136 points, which was 10 more than Ridgeline and Green Canyon. Mountain Crest finished fourth with 87 points, followed by Sky View (66) and Bear River (59).

“Very proud of how the boys played today,” said LHS head coach James Larsen, whose team went 10-0 in region duals this season. “Of course going in there was a target on our back at just about every position and every single one met some serious diversity in the semis and the finals, and what we saw gives us as coaches a great outlook going into state next week. We have identified some things that we can work on through the next four days and hopefully with those things will be ready to make a good run next weekend down in Salt Lake.”

The Grizzlies had their second straight region championship wrapped up before the finals, but still finished with a bang as their first doubles tandem of Junsung Lee and Dahoon Kwag outlasted Green Canyon’s Andrew Westwood and Jared Anderson in three sets in the last match of the tournament.

It was fitting that the first doubles championship match came down to a third set as it was an absolute dogfight between the top four seeds Thursday. Both semifinal showdowns went the full three sets, as did the match for third place.

Kwag and Lee lost the second set in each of their Thursday matches, but bounced back with clutch performances in the decisive third sets. Case in point: The duo won its final four games in the round of four and was triumphant in five consecutive games in the third set in the finals. Lee and Kwag dispatched of Anderson and Westwood by a 6-2, 4-6, 6-2 scoreline for the title.

“It makes it a lot more sweet. Just having to fight for something makes it a lot better,” Kwag, a freshman, said of the two three-set victories. “... I’m really proud. I think it really came down to the mental game. We’re both really good teams skill wise. It just kind of came down to who could keep their (mental focus) throughout the whole match.”

Lee is looking forward to next week’s 4A State Championships and has his sights set on team and individual glory. The sophomore is hoping for a rematch against a Dixie tandem he and Kwag lost to at the St. George Invitational. Lee and Kwag are undefeated against region opponents this season.

“As a team, I feel very good,” Lee said. “I feel like we have a very good chance at state and for us specifically at first doubles, I think we could definitely win this whole (tournament) as long as we play well and get ourselves together mentally.”

Logan should also have a legitimate shot at capturing a state title at No. 3 singles. Paul Miller has dominated that position all spring long and Thursday was no different. The senior only lost one game in his two matches and improved to 19-0 on the season. Miller defeated Ridgeline’s Davis Low 6-0, 6-0 in the finals.

It’s been a stellar second half of the season for Ridgeline’s Thatcher Ellis, who improved to 11-1 against region foes by prevailing against Green Canyon’s Carter Thorpe by a 6-1, 7-6 scoreline in the finals at No. 1 singles. In the process, Ellis avenged an early season setback to Thorpe.

“I’ve worked a lot on my serve and a lot on strategizing, like hitting deep to (my opponent’s) backhand and getting into position to hit more forehands,” Ellis said when asked what areas of his game as has shored up over the past few weeks.

The sophomore got off to an outstanding start against Thorpe as he found a perfect mixture of steady and aggressive play in the opening set, plus even threw in an occasional serve and volley.

“It felt great,” Ellis said of his performance in the first set. “I mean, Carter, he’s a great player. I’ve just got to thank all my coaches, my uncle Matt (Thatcher). He’s helped me so much throughout the years and it was just a great match. I’m excited for state.”

To his credit, Thorpe was able to elevate his level of play substantially in the second set as neither player led by more than a game. It came down to a tiebreaker and Ellis was able to get a crucial net roll winner on a drop volley to take a 5-2 lead, and he slammed the door three points later.

Ridgeline’s other region title was captured at No. 2 doubles, and the tandem of Isaac Peterson and Nick Clark certainly had to earn it. In fact, Clark and Peterson battled back from a set down in the semifinals against Green Canyon and the finals against Logan twin brothers Caleb and Phillip Xu.

Both second doubles teams displayed a lot of tenacity in the third set. One of the games lasted at least 10 deuces and a nice overhead by Peterson helped the Riverhawks close out that game and take a 4-3 lead. Clark, who executed an impressive between-the-legs shot earlier in the set, served well in the final game and the Ridgeline duo closed out a 0-6, 6-4, 6-4 victory.

“I’m just so proud of them,” RHS head coach Ryan Cheney said of Peterson and Clark. “One of the things we’ve been stressing with them is the power of mental resilience ... and they just showed that they really, really wanted it and they were able to still move their feet and act like they wanted to win region, and just be the more mentally tough team. And kudos to Logan. They’re really good. It was a good match.”

Peterson and Clark were seeded third at No. 2 doubles. Every other positional title was claimed by the No. 1 seed.

Reigning supreme at second singles was Green Canyon’s Calvin Felt, who has only lost once this spring. The senior mixed up his game well in his 6-2, 6-3 triumph over Logan’s Ashton Xu — the only player to beat Felt so far during the 2021 campaign.

“I was able to stay consistent, but still put pressure on him,” said Felt, who improved to 3-1 against Xu this season. “I mean, he was playing really good too. We had great rallies, lots of deuces. Honestly, a lot of games could have gone either way. It was a good match.”

Felt, who has been on the varsity squad since he was a freshman, has a lot of respect for Xu and said he wouldn’t be surprised if they play again in the championship round at the state tourney.

In addition to Logan, Ridgeline and Green Canyon, Mountain Crest was able to qualify all five of its positions for state, while all three of Sky View’s singles players punched their ticket to next week’s season-ending tourney.