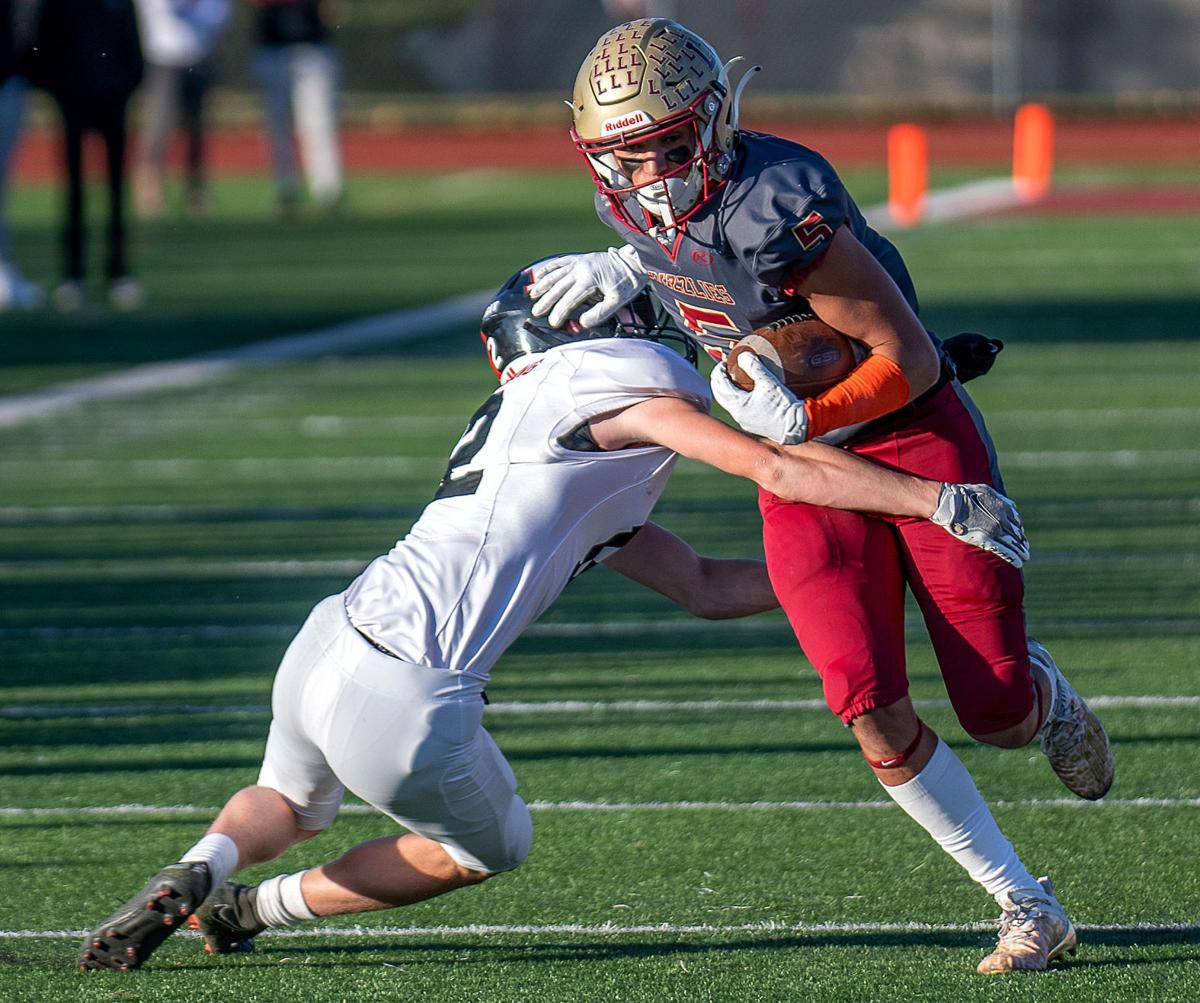 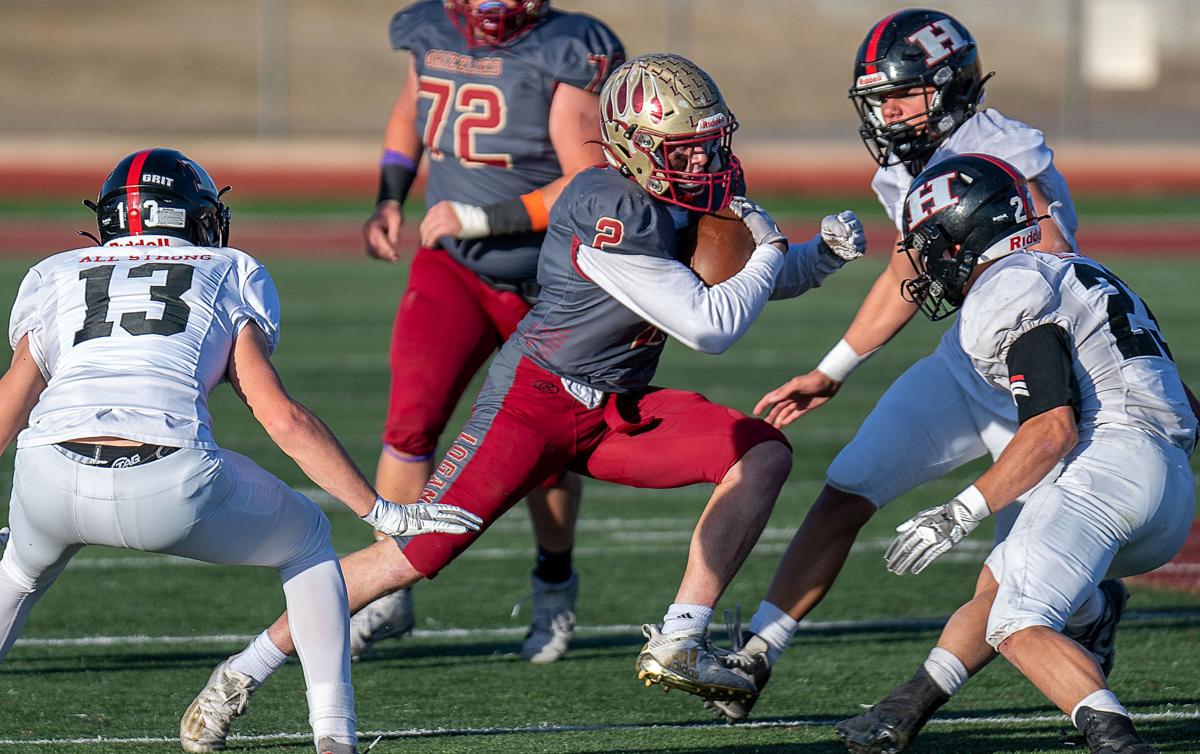 Logan running back Matthew Mason (2) runs down the field against Hurricane Friday at Crimson Field. Mason had two touchdowns in the win.

Logan running back Matthew Mason (2) runs down the field against Hurricane Friday at Crimson Field. Mason had two touchdowns in the win.

While there were a few hiccups along the way, Logan left no doubt it was the better team Friday evening at Crimson Field.

The Grizzlies opened the 4A state football playoffs with a resounding 43-22 win over Hurricane. Logan jumped out to a 21-0 lead early in the second quarter and never looked back.

“We were a little rusty and had some letdowns at times, but our kids came out and did what they needed to when they needed to,” Grizzly head coach Bart Bowen said.

Yes, there was some rust as the Grizzlies (4-6) hadn’t played in two weeks. However, Logan was never really threatened by the Tigers (2-9), who scored their final touchdown with less than a minute to play.

“We started a little rusty, but we picked it up in the second half,” said Grizzly quarterback Kody Kirk, who threw five TDs on the night. “We were not great, but got better. ... It feels good to get this one out of the way so we can move on to next week. We were excited for this one, but we know the big one is next week.”

Logan’s defense was stingy all night. The Grizzlies allowed the visitors to gain just 49 yards in the first half. The Tigers ended up with 160 yards of total offense for the game.

“Defense played really well,” Bowen said. “We gave them (Tigers) a short field with the pick, and then our JV gave up one. We are good with it.”

Logan finished with 369 yards of total offense. Kirk threw for 290 yards on 19 of 28 attempts. He did throw an interception in the second half.

“Going two weeks without playing, he (Kirk) missed the game speed a little,” Bowen said. “He got a lot better in the second half. He has some tunnel vision, but he is young and we are trying to break him of it. He had a pretty good game though.”

A 60-yard pass to Joshua Thomsen set up the first Grizzly score. Running back Matthew Mason crossed the goal line from four yards out three-and-a-half minutes into the contest to give the hosts a 7-0 lead.

Mason helped set up the second Logan TD with a 27-yard punt return. Running back Jaelin Hoth took a screen pass from Kirk, got some big blocks and scored from 14 yards out to make it 14-0 late in the opening quarter.

Cameron Cottle recovered a fumble early in the second quarter to set up the third Logan TD. Kirk found wide receiver Jaylen Sargent for an eight-yard TD. Noe Moreno booted the extra point to make it 21-0.

Mason missed the last part of the first half after getting dinged. He did return in the second half.

“He (Mason) toughed it out,” Bowen said. “He is a tough freaking kid. He’s been beat up all year but finds a way to gut through it. He is a great leader for our team.”

The Grizzlies dominated the first half, but turned the ball over on down at midfield with less than four minutes before the break. The Tigers, who did not complete pass in the first half, capitalized.

Bubba Moore scored from six yards out on fourth-and-goal with six ticks left on the clock. Hurricane hadn’t scored in its last two games.

The Tigers got the ball to start the second half and completed their first pass of the game, but it was sniffed out by the Grizzlies and resulted in a five-yard loss.

When Logan got the ball, Kirk wasted no time in helping his team find the end zone again. He threw a quick pass to Sargent, who picked up some big blocks downfield, including one by fellow receiver Gage Jenson. Sargent sailed into the end zone for the second time on the night, this time for a 57-yard TD.

Hurricane made it a little interesting after returning an interception 30 yards to set up good field position. Conner Nielsen scored from 12 yards out on third-and-11.

However, the Grizzlies responded with an 11-play, 84-yard drive. On thrid-and-goal from the 7, Kirk avoided some pressure and found Mason for his fourth TD toss of the game.

“I trust all my guys and it’s good to spread the ball around,” Kirk said. “They are all good playmakers.”

A big sack by Logan’s Tilose Tupou helped thwart the next Tiger possession. Kirk found Jenson on a perfectly throw and catch for a 25-yard TD and a 43-14 lead.

“It felt good to get back on track throwing the ball,” Kirk said. “The defense really helped us out with getting us some good field position.”

The Tigers tacked on their last TD and two-point conversion against the Grizzly reserves with 23 seconds to play.

“Snow Canyon is a really good football team,” Bowen said. “I picked them preseason to be No. 1. I thought they were really good. We will do our best and come up with a game plan to fight them and see what happens.”

For a half it was looking good for Mountain Crest (2-9). The Mustangs held a 7-6 lead and were playing tough in St. George against Desert Hills (5-6).

Cooper Gardner scored late in the first quarter to give Mountain Crest a 7-0 lead. The Mustangs took a 7-6 lead into the break.

Things quickly changed for the visitors. The Thunder opened the second half with a 70-yard kickoff return to the house to take their first lead of the game. Desert Hills scored 24 unanswered points for a 30-7 lead.

The hosts added two interception returns to the hose, the second from 98 yards to end the Mustangs’ season.

Desert Hills will travel north next week to take on No. 1 Sky View, who had a bye in the first round.