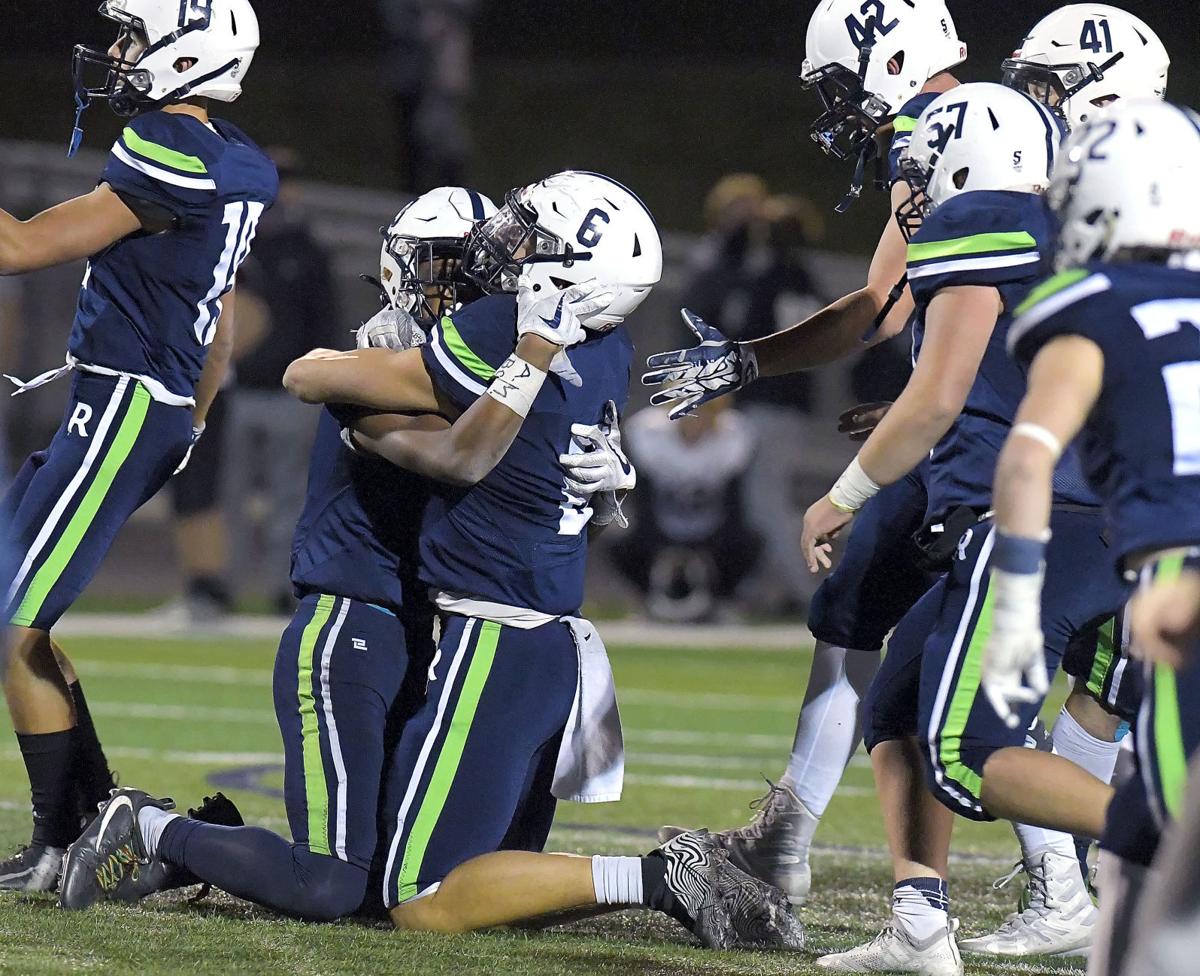 Ridgeline’s Jovesa Damuni and Carter Murdock (6) hug each other after the Riverhawks defeated Park City 42-35 on Friday in Millville. 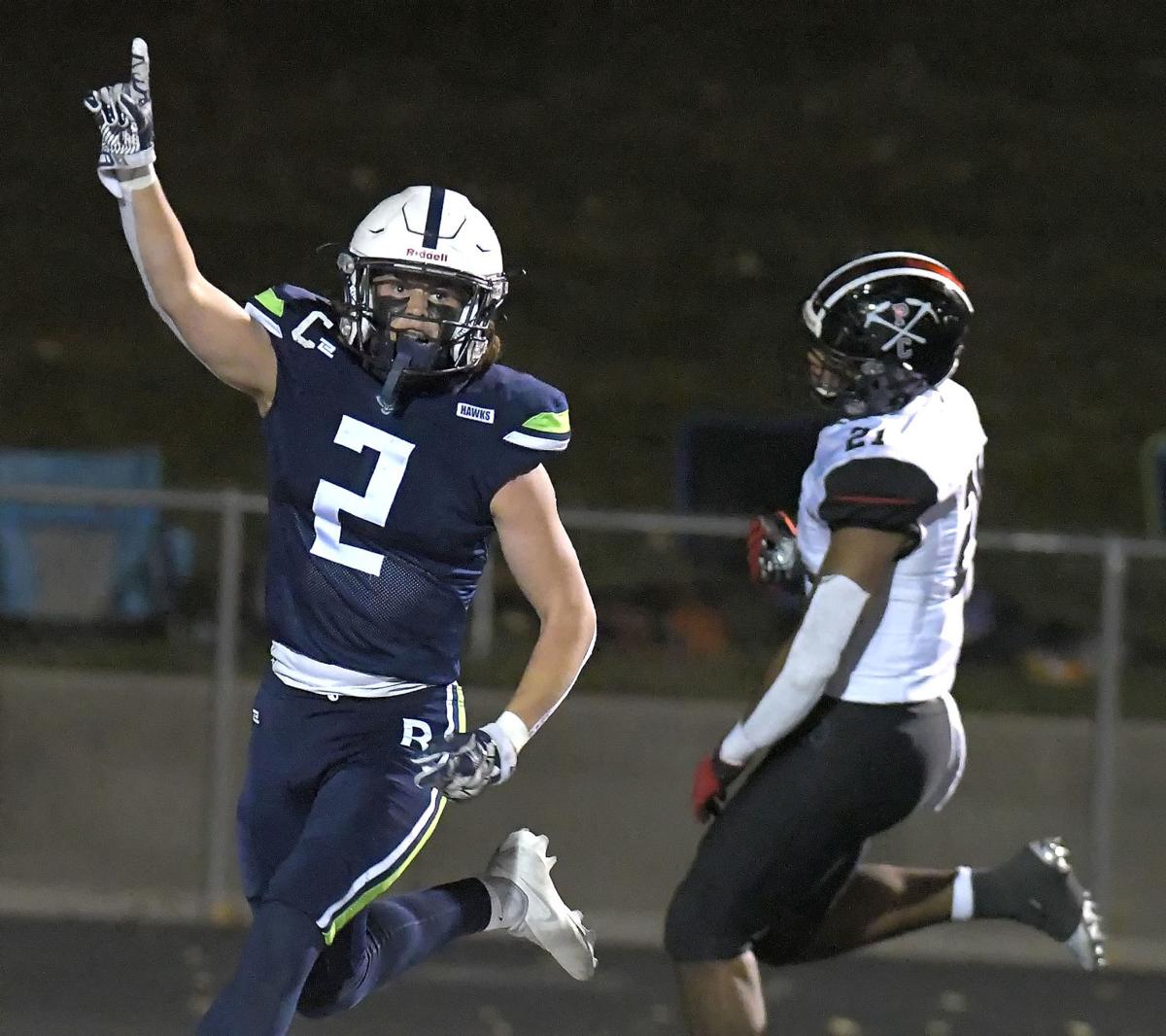 Ridgeline's Miles Eck (2) celebrates after returning a fumble for a touchdown against Park City on Friday in Millville.

Ridgeline’s Jovesa Damuni and Carter Murdock (6) hug each other after the Riverhawks defeated Park City 42-35 on Friday in Millville.

Ridgeline's Miles Eck (2) celebrates after returning a fumble for a touchdown against Park City on Friday in Millville.

MILLVILLE — It came down to the final seconds Friday night.

On a gutsy call, the Riverhawks scored and punched their ticket to the semifinals of the 4A state football playoffs. Ridgeline never trailed against visiting Park City on a warm but windy night, but the game was tied four times before the hosts sealed the victory with a touchdown pass with seven seconds to play and advanced with a 42-35 win.

“We came up clutch when it mattered most,” said Riverhawk quarterback Kaden Cox, who passed for three scores and ran for another.

Facing first-and-goal at the 9 with no timeouts and 14 seconds left on the clock, Ridgeline (9-1) lined up and took a delay of game. The offense stayed on the field.

“I was telling him (coach) to kick it,” Cox said. “But it worked and we scored and we won. That’s all I care about right now.”

But head coach Travis Cox stuck with his offense, despite having a capable kicker in Carter Murdock. Kaden Cox had time, stepped up and hit wide receiver Jovesa Damuni at the 4-yard line. Damuni made the catch with tight man coverage and was able to spin away from the Miner defender and jog into the end zone for the winning score.

“That play is second nature to us,” said Damuni, who finished with game-best seven receptions for 152 yards and two TDs. “We run that play a countless number of times during practice. We know what to do. If a gutsy play like that is called, we don’t flinch, just trust it. We believe it is going to work. ... I just put a little move on him (defender). Kaden put the ball on me, and that’s props to him.”

Did the Riverhawk coach think about kicking?

“We were going to kick it, but we felt like we had one more play,” Travis Cox said. “I’m glad it worked. Jovesa made a really good play to get in. We will take it. ... Heck of a play and now we live to play another game.”

Ridgeline had used two of its timeout to get the ball back, forcing Park City (9-3) to punt with under a minute to play. The Riverhawks started on their own 35 with 49 ticks on the clock.

A 17-yard run up the gut on third-and-2 by Noah White moved the chains and kept the drive alive. After spiking the ball and an incomplete pass, the hosts faced another third down. Cox scrambled out of the pocket and got out of bounds after a 22-yard gain, plus a late hit penalty on Park City. That set up the dramatic final 14 seconds.

“If he (Damuni) had been tackled right there, we would have had to hurry and spike it and who knows what would have happened,” Kaden Cox said. “I’m just glad he scored. ... Credit goes to him (Damuni).”

Park City finished with 495 yards of total offense, including 310 on the ground. Kirby Baynes rushed for 201 yards on 23 carries and scored once. Seth Warner made it two Miners in triple digits as he ran for 118 yards on 19 attempts and found the end zone twice.

“We knew their offense was one of the best in 4A,” coach Cox said. “We were fortunate to keep them to seven (points) in the first half. We didn’t have an answer in the second half. We couldn’t stop them. We just wanted one chance at the end.”

Ridgeline finished with 434 yards of total offense. Kaden Cox passed for 284 yards on 15 of 25 attempts, and also rushed for 38 yards on four carries. He did have three interceptions. White rushed for 97 yards on 22 carries and a TD.

“It was kind of ugly for me, but my teammates had my back the whole game,” Kaden Cox said. “... After I threw my third one (interception), I wasn’t thinking very well. Our defense came up really clutch and gave us a chance to win. Credit to the defense.”

The Riverhawks scored first on a five-play drive on their second possession of the game. Kaden Cox followed his line in from a yard out.

The first tie of the game came late in the second quarter. Warner scored from nine yards out.

Ridgeline scored twice in the last two-and-a-half minutes of the opening half. Kaden Cox hit Evan Webb in stride for a 21-yard TD. Six plays later, Park City line up to punt, but a bad snap rolled past the punter. An alert Miles Eck gobbled up the loose pigskin and dashed 20 yards to paydirt, giving the Riverhawks a 21-7 lead at the break.

“We are a pretty tough group mentally,” coach Cox said. “We didn’t play great in the second half, but it’s a credit to our guys for hanging in there and making plays at the end. That’s what good teams do.”

The Miners owned the third quarter, scoring on a short run and a halfback pass on fourth-and-8 from the 48. Heading to the fourth, it was 21-21.

Ridgeline scored on the first play of the final period when Damuni got behind the Park City secondary, and Kaden Cox found him for a 43-yard score. That was the start of five combined TDs by the Miners and Riverhawks.

Ridgeline has now advanced further than ever in school history. The Riverhawks will now travel north to face region foe Sky View. The Bobcats handed Ridgeline its lone loss this season with a late field goal.

“It’s going to be a good game,” Damuni said. “Sky View is a great program. We will prepare like we always do.”

With the win, Ridgeline has now won five in a row and halted an eight-game winning streak by Park City. The Riverhawks lead the all-time series with the Miners, 3-1.

“We are really excited to play those guys again,” coach Cox said of Sky View. “We’ve been looking forward to that game since the bracket came out, but we knew we had to get these guys (Miners). They are an unreal team, but now we get to play them (Bobcats)."