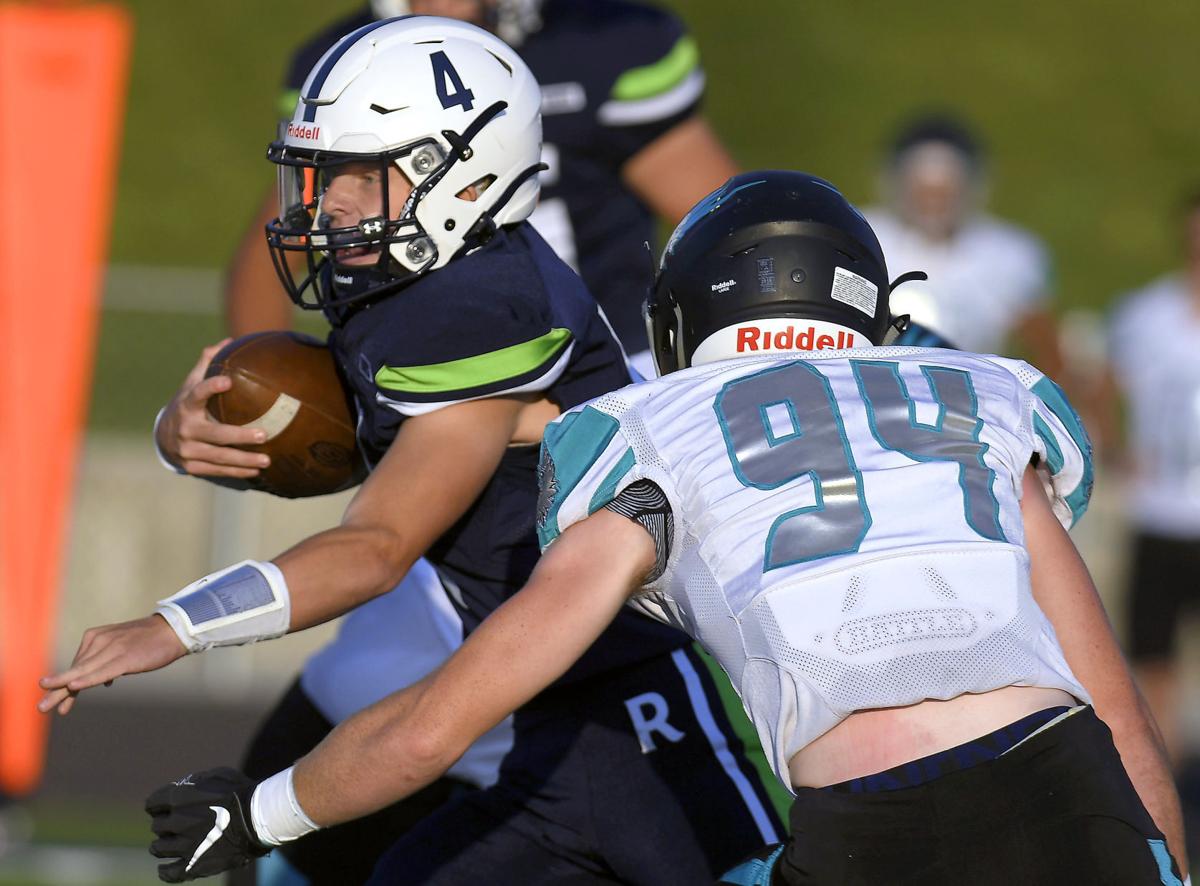 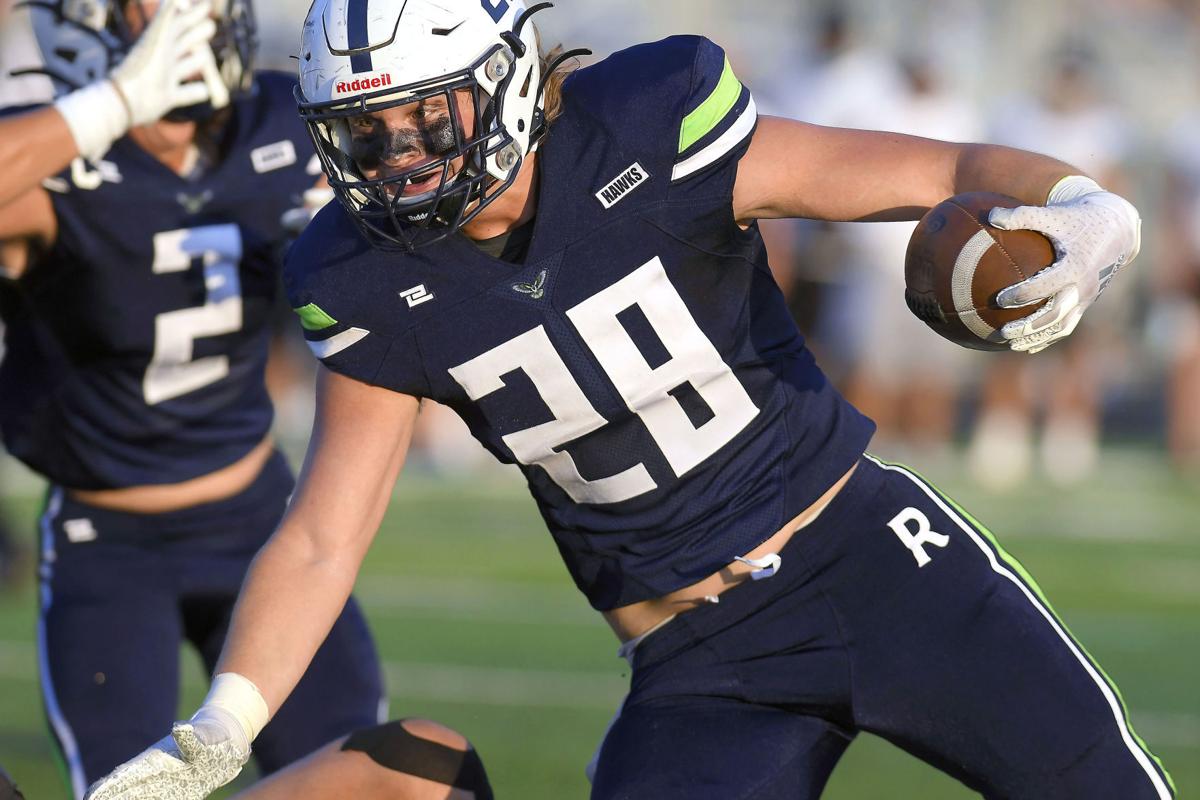 Ridgeline running back Jaden Harris carries the ball against Farmington on Friday in Millville.

Ridgeline running back Jaden Harris carries the ball against Farmington on Friday in Millville.

It was a busy weekend for Cache Valley’s high school football programs as all seven of them were in action.

The weekend was highlighted by very impressive performances from Sky View and Ridgeline. Meanwhile, West Side opened its defense of its 2A state championship by pulling away from Firth on the road, while Mountain Crest and Logan notched their first victories of the 2020 campaign.

Sky View improved to 3-0 with a stunning 45-0 shutout of traditional powerhouse program Highland, which competes in Idaho’s highest classification. The Bobcats are the first team to keep the Rams off the scoreboard since 1982, according to the Idaho State Journal.

“I was as nervous for this game as I have been in a long time,” SV head coach Chris Howell said. “They’ve got some really, really good players, and obviously they’re really well-coached and have just a culture of winning. And I thought our kids just did a tremendous job of answering the bell tonight.”

Quarterback Kason Carlsen tossed a trio of touchdown passes in the opening half — two on third-and-goal plays — for the Bobcats, who scored at least one TD in every quarter. Walter Collins, Kimball Jackson and Trey Nyman, who had a 77-yard reception on the first play from scrimmage in the third quarter, all found paydirt on passes from Carlsen.

Kasen Erickson booted a 36-yard field goal on the second-to-last play of the second quarter to give Sky View a commanding 24-0 halftime lead.

Collins and Truman Moser rushed for touchdowns in the second half, and Isaac Larsen traversed his way to the end zone on a fly sweep just seconds into the fourth quarter. Collins finished with 84 yards on 21 carries.

It was a memorable night for the Sky View defense, which intercepted three passes — one apiece by Titan Saxton, Cole Watterson and Hunter Lewis — and racked up eight tackles for loss. Lewis accumulated 13 tackles and pounced on a blocked field goal in the second quarter.

“We played a complete game in every phase of the game,” Howell said. “Obviously, we still made mistakes, but one of the things we felt like on both sides of the ball is that we hadn’t played four quarters consistently yet, and I really thought we did that tonight.”

Sky View has won 15 straight games dating back to last season and has blanked seven of those opponents.

Like Sky View, Ridgeline (2-0) kept its undefeated record intact by blowing out 5A Farmington in its home opener, 45-7. The Riverhawks (2-0) scored at least 13 points in each of the first three quarters before calling off the dogs in the fourth.

Kaden Cox had a big game for the hosts as he accounted for five touchdowns — three with his feet. The junior signal caller completed 25 of 33 passes for 276 yards and two TDs, vs. one INT. Noah White and Strat Simmons hauled in TD passes from Cox.

“We had a pretty good game plan going in,” Ridgeline head coach Travis Cox said. “We felt like we had a good idea of what they were going to do against us. Our kids executed well, we brought pressure when we thought we could and we stayed back when we didn’t think we could. We just executed the game plan.”

Two Ridgeline players finished with more than 100 yards receiving in Simmons (9-106) and Jovesa Damuni (6-107). White led the Riverhawks with 86 yards on 19 carries. Carter Murdock was successful on a 41-yard field goal attempt for the hosts.

The Riverhawks were just as dominant on the defensive side of the ball as they limited the Phoenix to 166 yards of total offense. Dillon May, Will Booth and Jaden Harris each picked off a Farmington pass, and the hosts also recovered a fumble. Harris contributed with 10 tackles, including 2.0 for a loss.

It was Ridgeline’s first game in two weeks as Cyprus canceled their Week 2 matchup after two of its players tested positive for COVID-19.

“This season, honestly, whenever you can play a game it’s special,” Cox said. “You’ve got to enjoy every moment you have out here. You just never know and we learned that lesson last week.”

West Side increased its winning streak to 12 with a 33-6 triumph over rival Firth. The Pirates (1-0) scored the final 33 points of the game — 18 of them after halftime.

“I thought we battled,” WS head coach Tyson Moser said. “Being down 6-0, the kids didn’t quit and I thought we came back and battled. I was proud of their effort that way.”

Cage Brokens rushed for a pair of touchdowns for the Pirates, while Owen Nielsen also scored with his feet. West Side quarterback Blaize Brown tossed TDs to Parker Henderson and Easton Shurtliff.

Taze Stegelmeier and Wes Millburn led another impressive effort by the West Side defense by combining for 21 tackles, including 3.0 for a loss and one sack. Owen Nielsen picked off a pass, and Brokens recovered a fumble.

“We have to clean up a lot of things and we’ve got a long way to go, but in the end it comes down to making plays, and our kids made big plays,” Moser said. “I think Firth beat us statistically, but our kids made more big plays.”

Mountain Crest enjoyed a breakthrough performance offensively against Idaho’s Bonneville. The Mustangs (1-2) scored on their first five possessions en route to a 56-22 drubbing of the Bees in a game contested at Madison (Idaho) High School. Mountain Crest and Sky View participated in the annual Rocky Mountain Rumble.

The Mustangs got two touchdowns apiece from Cam Oswald, Elijah Jackson and Emilio Veater. Jackson and Veater both scored on plays of 46 yards or longer. Zeb Bensen and Zander Ryan also found paydirt for Mountain Crest, which scored a combined 14 points in its first two games of the season.

“The kids just played hard and really well,” MC head coach Jason Lee said. “We should have put up points last week. We had a touchdown called back that shouldn’t have been. We moved the ball really well last week, just didn’t get it in the end zone at times.”

Mountain Crest jumped out to a 36-0 lead and never looked back. Preston Lofthouse threw the team’s lone TD pass. The other seven touchdowns were of the rushing variety.

“The O-line blocked well,” said Lee, whose team scored at least one TD in every quarter. “They (Bees) played in that 3-3 stack and blitzed all the time, but when we blocked them up, we broke some big runs and had some good throws. If you break that first level, then it’s a foot race.”

Logan (1-2) jumped out to a 28-7 lead on the road against 5A Cyprus, which scored all of its points in the second half of the Grizzlies’ 31-28 victory. The Pirates had a chance to force overtime, but their 45-yard field goal attempt in the waning seconds of the fourth quarter came up well short.

Grizzly signal caller Kody Kirk threw for 212 yards and three touchdowns, vs. one INT, on 15 of 22 passing. Kirk also scored with his feet in the second quarter.

Jaylen Sargent finished with eight receptions for 104 yards and a pair of TDs for the Grizzlies, who got an 82-yard scoring catch from Gage Jenson. Noe Moreno drilled a 44-yard field goal in the fourth quarter — points that proved to be crucial for the visitors.

Logan received another big defensive effort from Payson transfer Matthew Mason, who amassed 18 tackles and already has 44 in just three games. Manase Tupou contributed with two sacks for the Grizzlies, who came up with 7.0 tackles for a loss as a team.

“Our kids made plays when they needed to on both sides of the ball,” Bowen said. “Offense came alive today.”

In other local action, Green Canyon was edged on the road by Stansbury, 42-34, while Preston lost its season opener at Shelley, 33-19.

A couple of missed opportunities and the inability to contain Stansbury’s vaunted rushing attack proved to be too much for Green Canyon to overcome. The Stallions scored 14 points in each of the final two quarters in a competitive showdown that featured four ties and two lead changes.

“They rushed it down our throats in the second half, and then we had some good drives, but we didn’t finish them,” GC head coach Craig Anhder said.

Running back Landon Peterson shined for the short-handed Wolves, who were missing three of their starters. Peterson racked up 165 yards on 27 carries and also hauled in a 37-yard TD pass from Jake Lundin on a third-and-long play in the first quarter. Peterson also had a rushing TD.

“(Our offensive line) would create that initial hole there and Landon Peterson just wouldn’t go down,” Anhder said. “He would take on two or three guys and just keep fighting. Oh, he ran so hard tonight. It was neat to see him do that, and then our O-line did a great job of giving us some pocket for Jake to have some time to throw the ball. It was a good game for our O-line.”

Lundin rushed for 68 yards and completed 16 of 27 passes for 209 yards and three TDs, vs. two interceptions. The senior found Jacob Regen, who caught seven passes for 87 yards, on a pair of scoring strikes.

Regen led the Wolves with nine tackles, while McKade Hellstern chipped in with seven. Regen and Aidan Merrill each had an INT.

As for the Indians, 22 of their athletes saw their first varsity action. Preston only trailed by one point at halftime (13-12), but the Russets pulled away a little bit after the break.

“We are just a young team,” Preston head coach Eric Thorson said. “We’ve got some growing pains. ... With the season we have ahead of us, we definitely need to grow and get better. This game was a discovery.”

Preston QB Brecker Knapp threw for 211 yards and three scores on 15 of 26 attempts. Cole Harris snared two of those touchdowns — a 60-yarder and a 40-yarder — and Tait Rawlings turned a shovel pass into a 52-yard sprint to paydirt early in the fourth quarter.

Tate Greene intercepted a pass for the Preston defense, which also got a fumble recovery.

“There was a time when our defense was really giving us the ball on a silver platter, and our offense couldn’t capitalize,” Thorson said.