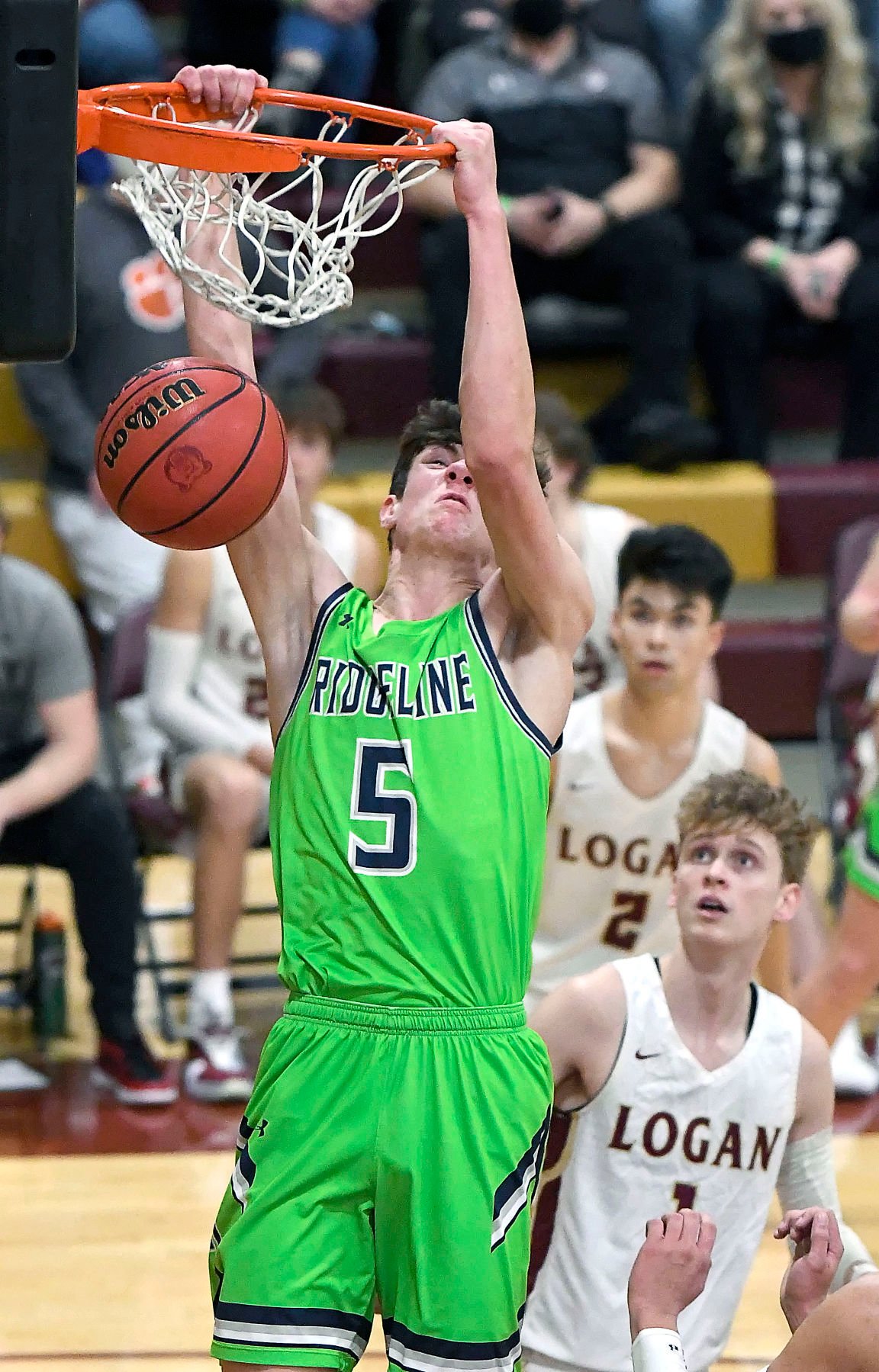 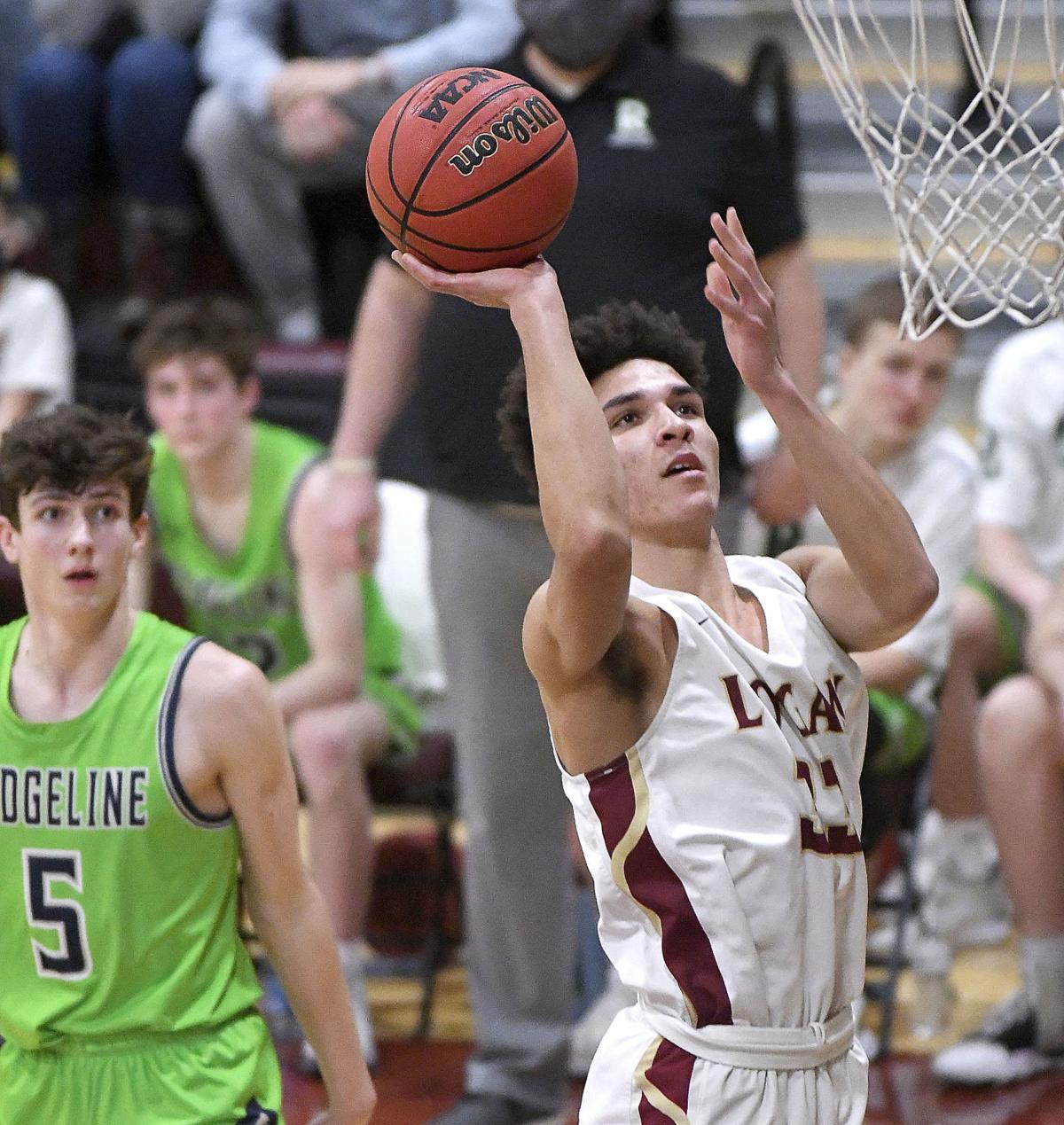 A very challenging preseason schedule helped prepare the Riverhawks for Region 11 play, and it all paid off in a big way Friday night at Grizzly Den.

Ridgeline’s boys basketball team went on a 8-0 run in the second half to take the lead for good and pulled away late for a hard-fought 70-61 victory over Logan.

In the process, the Riverhawks captured their first outright region championship as a 4A program. Ridgeline shared the region title with Sky View a year ago.

“I am so happy for our guys to go into an absolutely crazy environment and play against a super Logan team and come out with a win,” RHS head coach Kyle Day said. “Credit coach (Logan) Brown. He did a tremendous job getting his boys ready to go, and they came to play. It was an absolute from the jump ball. We talked about weathering the storm that we knew would come and I thought our boys did a great hob of weathering it.”

The Riverhawks (14-8, 9-1) are certainly peaking at the right time as they will take a seven-game winning streak into the 4A State Championships.

Likewise, the Grizzlies (14-6, 6-4) appear to be playing their best basketball of the season heading into the playoffs. Logan definitely made Ridgeline sweat it out this time around, unlike the Riverhawks’ 26-point victory in the first showdown between the two teams.

In fact, the Grizzlies got off to an outstanding start Friday, especially JJ Sargent, who drained three 3-pointers on his way to 11 first-quarter points. An Oliver Hashimoto 3-ball at the buzzer gave the hosts a 20-14 lead heading into the second quarter.

Logan held the lead until Chase Hall knocked down a shot from downtown to pull Ridgeline even at 29-29 with 3:16 remaining in the second quarter. Hall exploded for 13 points in the quarter and banked in a 40-or-so-foot heave just before the buzzer sounded to propel the visitors to a 39-37 halftime advantage.

The Grizzlies came out strong in the third quarter and regained the lead at 47-45 on two Jadin Penigar free throws. The Riverhawks responded with their aforementioned 8-0 spurt to take a lead they wouldn’t relinquish.

Logan got as close as 53-51 on a tough drive by Penigar and even missed a pair of free throws that would have tied it. The Grizzlies also pared their deficit to two points early in the fourth quarter, but the Riverhawks scored five straight points — the final three on a Kaden Cox trey.

Ridgeline, which knocked down its final six free throw attempts, never let Logan get closer than five points the rest of the way.

Hall paced a balanced Ridgeline offensive attack with 20 points, followed by Spencer Adams and Cox with 15 apiece. Peyton Knowles chipped in with eight points — two on an ally-oop dunk at the end of the first quarter.

“I couldn’t be happier for our seniors, Chase Hall and Spencer Adams,” Day said. “They showed tremendous composure, made huge plays when it mattered most.

“I love coaching these boys and being a part of this team. Couldn’t be prouder of them as they achieved one of our main goals of winning a region title tonight.”

Sargent led the way for Logan with 18 points, while Penigar added 17 and Isaac Tuft nine.

“We played as hard as we could for four quarters,” LHS head coach Logan Brown said. “Ridgeline just made plays when it mattered. We will keep getting better and improving. We have a group that wants to finish strong. There are a lot of things to build on and some areas we will clean up.”

Sky View pulled away from host Mountain Crest in the fourth quarter and prevailed, 69-53, while Green Canyon held off visiting Bear River, 43-40.

The short-handed Mustangs (2-18, 0-10) only trailed the Bobcats (15-5, 8-2) by five points heading into the fourth quarter. However, Sky View seized control by outscoring Mountain Crest 21-10 during the final eight minutes of action.

Evan Hall scored 10 of his career-high 27 points in the fourth quarter for the Bobcats, who got 12 points from Jackson Schumann and seven from Taydem Neal. Hall knocked down 13 field goal attempts in the contest.

“MC played hard and well,” SV head coach Kirk Hillyard said. “Our kids withstood several runs by a good team and showed some good patience on offense. Titan Saxton and Jackson Schumann sparked a run with a couple great assists to Evan Hall in the fourth quarter that helped build a lead and keep it for good. Happy for the kids to finish out the (regular) season with a good win heading into the (state) tournament.”

Nick LeFevre had a big game for the Mustangs as he finished with 22 points. Preston Wiberg and Oliver Nethercott teamed up for 19 points for the hosts. Wiberg netted 14 points for Mountain Crest in its first game this week.

“I was proud of the way we came out and competed tonight,” MC head coach Kevin Andersen said. “Eventually their size got us.”

Meanwhile, Green Canyon needed a few clutch plays late to beat Bear River. There were four lead changes in the final 2:20 of the game.

Jake Lundin gave the Wolves (12-10, 5-5) the lead for good on a driving layup with :53 left. A few seconds later, Jace Blotter stole the ball and scored to give the Wolves a three-point cushion. The Bears (9-12, 2-8) had two chances to tie the game, but misfired on a pair of contested 3-pointers.

“It was an ugly night,” GC head coach Dan McClure said. “We preached and preached the importance of not having a letdown coming off of the win Wednesday (over Sky View). I think you saw a little bit of that. We didn’t shoot the ball well and were a little flat for much of the game. I though Jake Lundin and Jace Blotter were huge for us down the stretch and made big plays.”

Lundin led the Wolves with 11 points, followed by Jared Anderson with 10 and Jake Regen with eight.

Gehrig Marble scored 11 points for the Bears, who got eight points from Kace Jones.