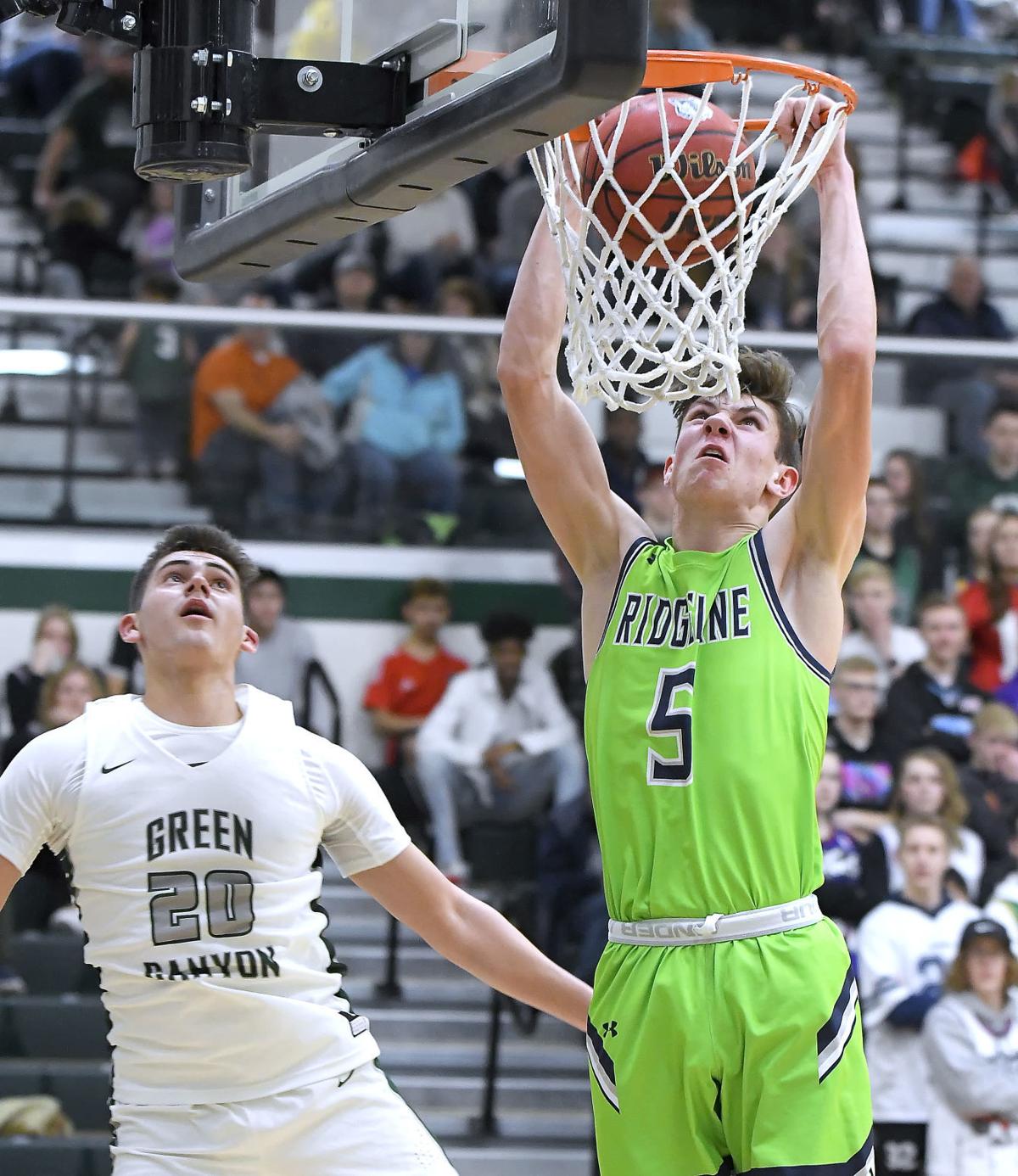 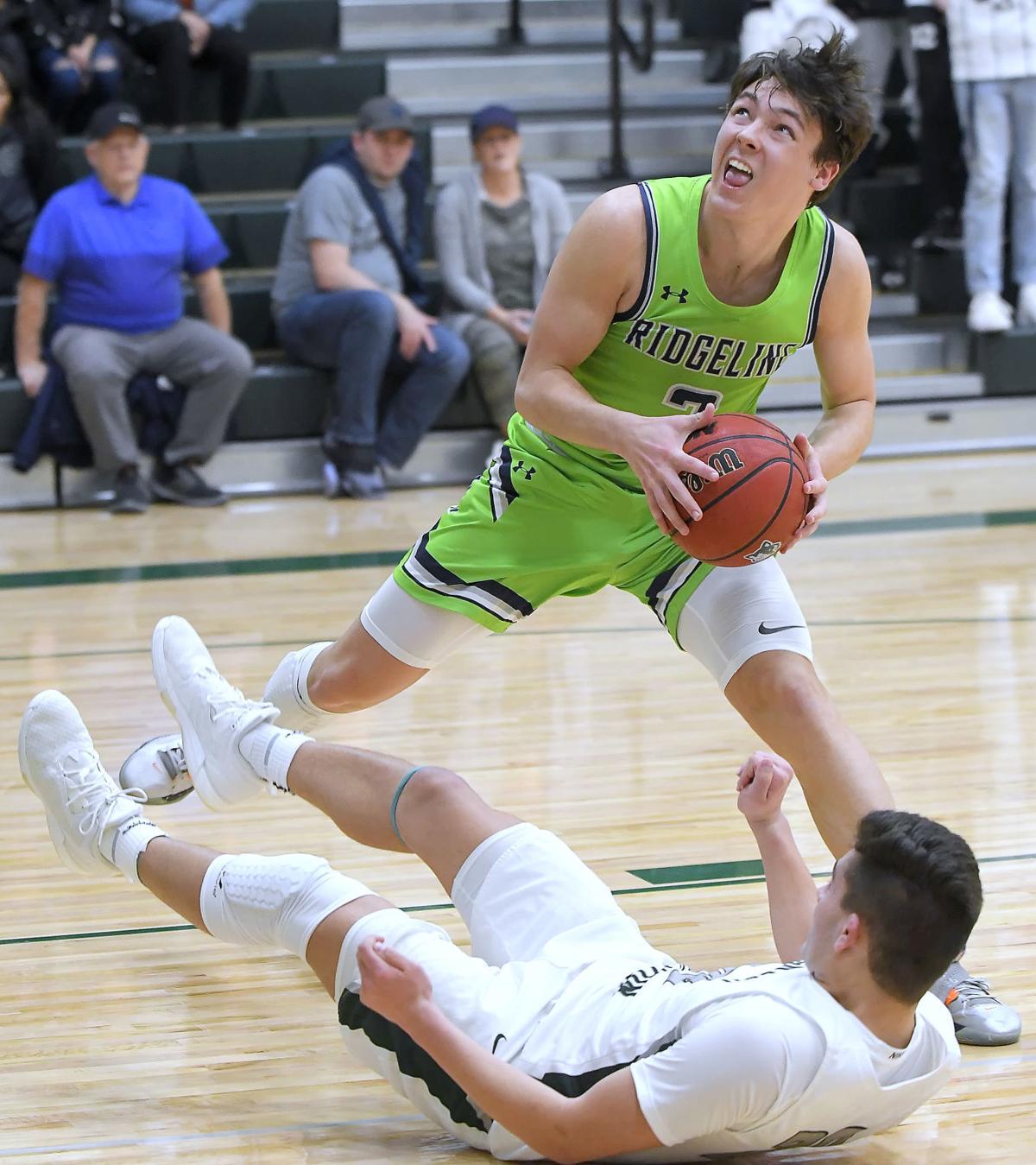 Ridgeline's Jackson Baker looks to shoot the ball after running over Green Canyon's Carter Maughan on Friday in North Logan.

Ridgeline's Jackson Baker looks to shoot the ball after running over Green Canyon's Carter Maughan on Friday in North Logan.

NORTH LOGAN — Ridgeline relied on its defense on the road and picked up its third straight victory, beating Green Canyon 62-40 in a Region 11 boys basketball game on Friday night.

Although Green Canyon (9-9, 2-4) opened on an 8-0 run, neither team was able to find its scoring form in the opening period, with just 19 points between the two schools. It wouldn’t be until roughly five minutes into the game that normally potent Ridgeline (12-6, 5-1) would make its first bucket.

Forward Peyton Knowles drained a 3-point to put the Riverhawks on the board, followed by 3s from Kyler Hansen and Spencer Adams, pulling the score within one point, still in Green Canyon’s favor.

“They had those zone kind of matchup looks they threw at us and, really, we were just kind of out of rhythm for a quarter,” Ridgeline head coach Kyle Day said.

From three minutes left in the first quarter through the end of the half, Ridgeline scored 28 points and allowed just 12 to its opponent. Green Canyon found it hard to get buckets in the first half, making just 8 of 4 shots from the field and 1 of 6 from deep. And that trend carried over into the second half as well, with the Wolves ending the contest with 14 makes on 40 field goal attempts.

A spark from team-leading scorer Kaden Cox and starting point guard Chase Hall ignited the Hawks in to go on such a run, but the scoring wasn’t coming from a single source. Once Ridgeline was able to find its groove, quick ball movement and smart passing took over, and everyone on the court got involved in the scoring. At the half, no player had more than six points for either team.

“The kids trust each other and it’s a beautiful thing to watch right now,” Day said. “You work all year to have moments like this where they are trusting each other and they let each other shine throughout the whole game.”

Like Ridgeline, Green Canyon was sharing the scoring load among all the players, but more out of necessity than design. Sophomore Cade Deboard led the hosts with nine points on the night, but never got his shot going and finished 3 of 13 from the field — 1 of 7 from deep.

Three other Green Canyon players combined for 22 points — Carter Maughan (8) McKay Yorgason (7) and Caleb Robison (7) — but Ridgeline’s defense made it hard for Green Canyon to break through, led by Knowles, who had four blocks in the game.

Midway through the third quarter, Deboard pulled the Wolves within nine points, capitalizing on a four-pass ball rotation that started on one side of the perimeter before finding him all the way on the other side of the court for a made trey. Shortly after, Green Canyon starting pressing. But Ridgeline was composed, and broke out of it by passing cross-court through the teeth of the defense.

The quick transition game led to a high number of points late in the game as the team was able to find the right player open under the basket. It was almost second nature for the Hawks.

Forward Jackson Baker led the visitors with 17 points, nine coming in the final five minutes of the game as he was often the end product of Ridgeline’s counter-press. The ability to read the game this way is one of Ridgeline’s strengths and, according to Day, is a combination of personnel and continuous work.

“You know, the kids are great mentally, but we also work on that stuff all the time,” Day said. “That’s something that we are cognizant of, we are really consciously working on that all the time.”

Ridgeline’s one region loss came two weeks ago to Sky View, and the Riverhawks, winners of 12 of their last 14 games, will have a chance to avenge that loss next Friday — this time at home.

“The kids came ready to play defensively from the start,” SV head coach Kirk Hillyard said. “We jumped out on them early. Our length gave them a little trouble and we got some easy and early baskets.”

It was a balanced offensive effort for the Bobcats, who exploded for 51 points in the opening half. Mason Falslev led the charge with 19 points, Sam Phipps added 18, Bracken Schumann 16, Jackson Schumann 12 and Taydem Neal nine.

There were some big momentum swings Friday night in Hyrum, with Logan (7-11, 3-3) outscoring Mountain Crest (1-17, 0-6) 19-11 in the fourth quarter to pull away. The Grizzlies, who swept the season series with the Mustangs, also won the second quarter by a big margin, 18-5.

Jadin Penigar netted a game-best 20 points for the Grizzlies, who knocked down 15 of 20 free throws. Isaac Larsen scored eight of his 14 points in the fourth quarter for Logan, while Ethan Davis chipped in with 11.

“We really did a good job of responding in the game when we needed to,” LHS head coach Logan Brown said. “I thought Mountain Crest played hard and really went at us, but our team made big plays when it mattered. The way we finished the second quarter was huge. JJ Sargent was an impact player tonight. It was a great team win and I thought we had a balanced attack throughout the game.”

Tanner Bone drained 4 of 5 3-point attempts for the Mustangs en route to 18 points. Marshall Nethercott contributed with 16 points for the hosts, and Caleb Archibald with 11. Mountain Crest took a 12-7 advantage into the second quarter.

“Great win tonight,” PHS head coach Tyler Jones said. “Great atmosphere and we’ll take it any time we beat Century. ... (Century) had a game plan to get physical, get rough with us and see how we would handle it, and it was effective. ... But I thought we were able to withstand that and in the second half we got Ty (Hyde) going, and that was big.”

Ty Hyde paced Preston with 17 points, Scott Dunn was right behind with 16 and Cooper Hobson drained a trio of treys and finished with 10 points. Luke Smellie threw down another dunk and added nine points.

Brecker Knapp returned to Preston’s lineup after missing the previous 14 games with a stress fracture in his right foot and knocked down a pair of free throws in the final minute of play.

Kajsia Fuller buried 11 shots from the field en route to 27 points for the Pirates, who got 14 points from Kenlee Nance and eight from Sienna Fuller.

West Side outscored Malad 23-10 in the second quarter to take control. The Pirates limited the hosts to 16 points in the middle two quarters.