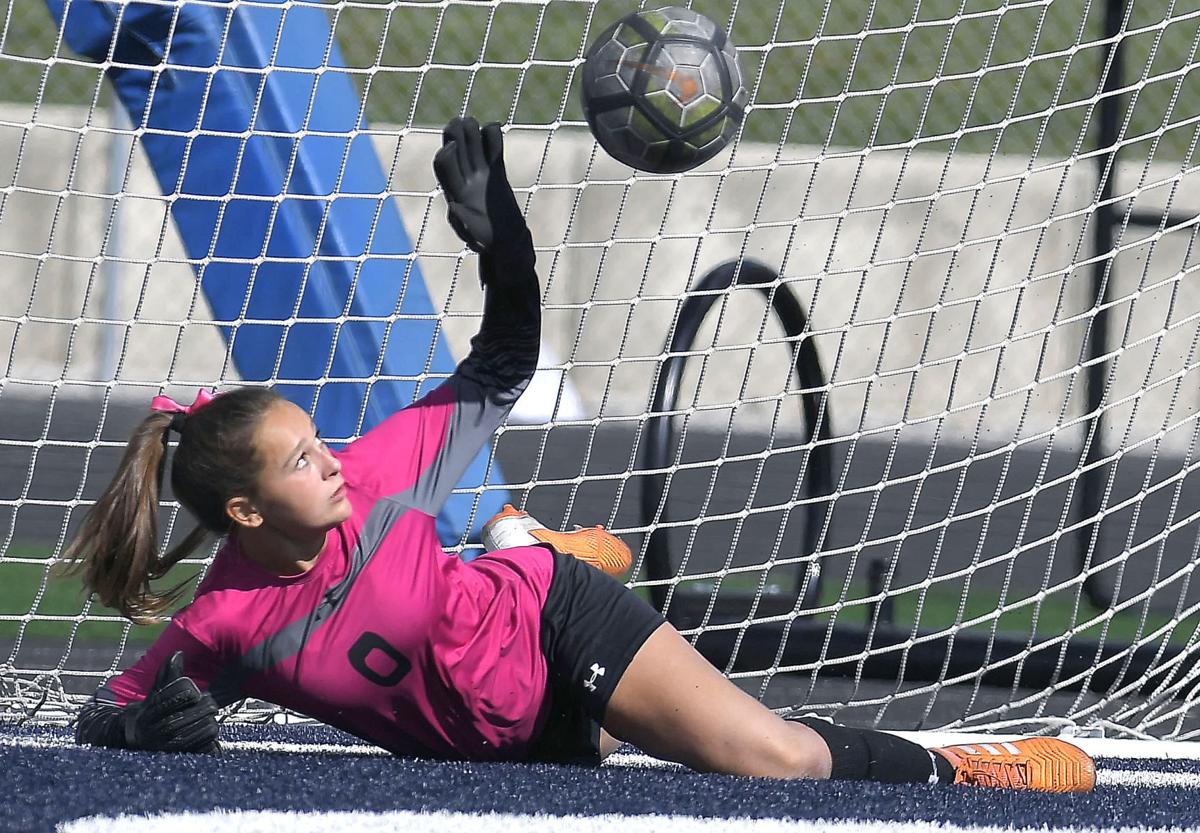 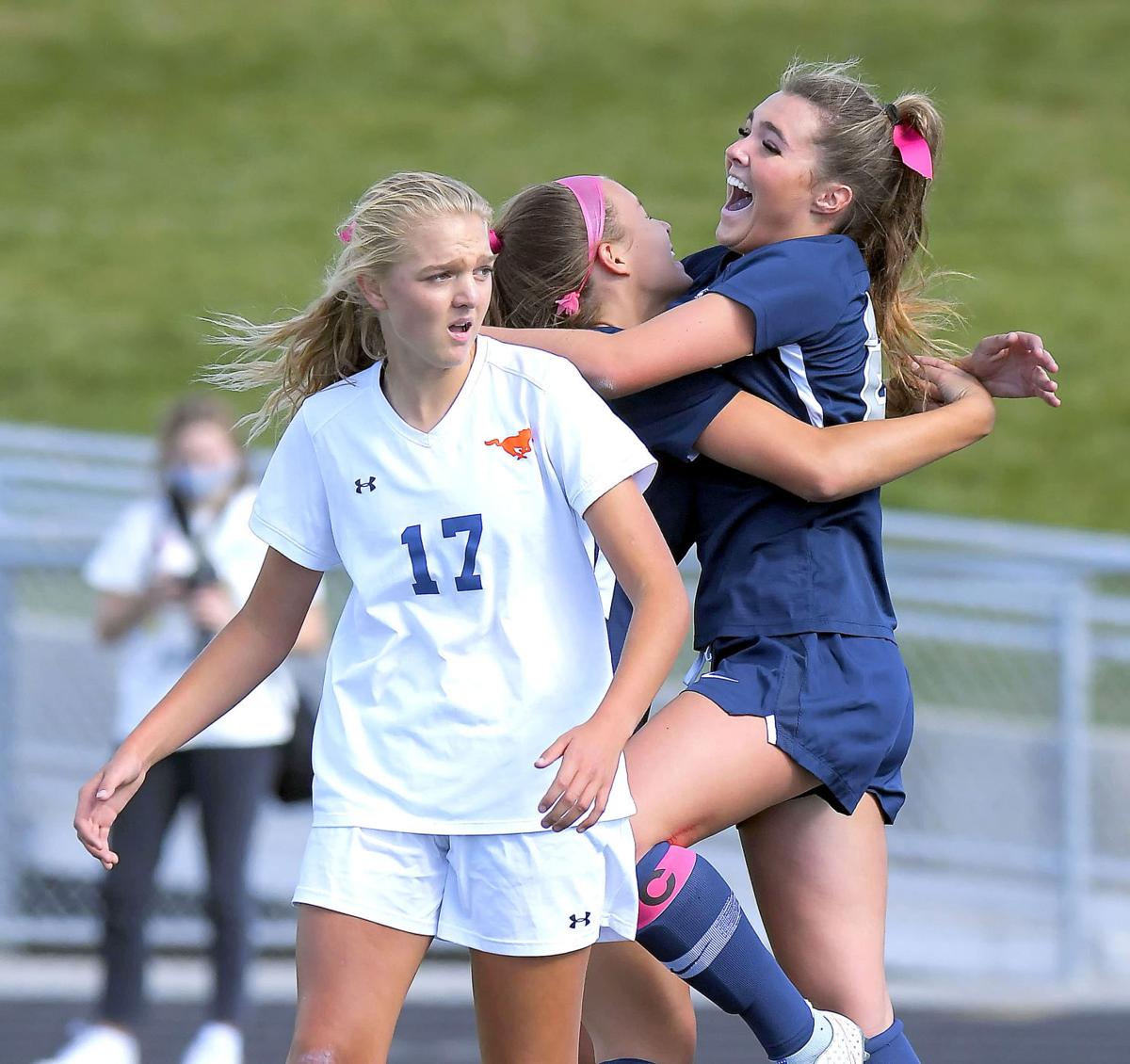 MILLVILLE — There’s no question things got a little dicey for the Riverhawks in the second half, but they were ultimately able to right the ship and prove why they were arguably the hottest team in the 4A classification over the final few weeks of the regular season.

Haley Van Yperen headed in a Oakley Rasmussen free kick in the 78th minute, propelling Ridgeline’s girls soccer team to a hard-fought 2-1 victory over Mountain Crest in the quarterfinals of the 4A state tournament on a warm Saturday afternoon.

It was an entertaining match consisting of wild momentum swings. The third-seeded Riverhawks were fluid and dynamic in possession en route to dominating the first half, but only had a 1-0 lead to show for it. To their credit, the 11th-seeded Mustangs picked up their level of play and intensity big time after halftime, and were rewarded with an equalizer in the 55th minute. However, Ridgeline turned things around during the final 15 minutes of the game to punch its ticket to the semifinals for the second straight year and extend its winning streak to eight.

“We’ve been in this position before,” RHS head coach Mark Tureson said. “We didn’t panic, right? We stuck to what we knew that we wanted going to do. Mountain Crest played a phenomenal second half. I’ve got to hand it to them. ... But other then the goal that went in, I thought our defense actually managed that (wave of MC momentum) well against a very good high-paced team, and it gives us confidence that we have the right system in place, the girls in place. And then at the end the girls never panicked. They just did what we’ve been asking them to do.”

It was sweet redemption for Van Yperen, who had a golden chance to give the Riverhawks (13-6) the lead with 14 minutes remaining in the second half but, after tracking down a Rasmussen through ball, was denied on a breakaway by Mountain Crest goalkeeper Jade Harris. The freshman dove to her right to rob Van Yperen.

However, the senior buried her next opportunity on a lovely header across the face of the goal. Van Yperen was energized by the Ridgeline fans, who came alive late in the match.

“Their energy was awesome, it really got us hyped, and then (the MC students) were pissing me off,” Van Yperen said. “The goalie had an amazing save on my one-v-one, an amazing save by her. And then they started chanting ‘overrated.’ I don’t know if that was at the team or at me, so I was like, ‘we’ve got to pick it up, we have to win this, we can’t let Mountain Crest have this one.’”

Those Mustang fans were certainly passionate and they surely helped their team find another gear — one it was sorely lacking — in the second half. Mountain Crest (9-9) only took one shot the entire first half, but fired off the first seven shots after the break.

“I wish I could say it was all my halftime speech, but we (as coaches) just told them ultimately it was up to them,” MC head coach Amber Hyatt said. “Did they want this to be their last game? If so, then keep playing kind of like you’re playing. If you don’t want it to be your last game, then we just need to pick up the energy, pick up the intensity and just everything needs to be better as a whole. Obviously, I think that’s what they decided and they came out and played with a lot more intensity than they were playing in the first half, and second half obviously we played much better. ... Obviously, I was proud of my girls for continuing to try and get their chances and take shots and have opportunities, so I was happy that we got one in to tie it back up.”

The Mustangs had a good chance to equalize on Baylie Baldwin’s volley at the back post pretty early in the second half. The visitors kept applying pressure and got their breakthrough when Keiera Nielson tracked down a long pass toward the corner flag, dribbled the ball nearly to the end line and found the back of the net. Regardless of whether it was a cross or shot, Nielson’s crisp strike skimmed the underside of the crossbar before going in.

Indeed, the Riverhawks were reeling a bit, but they regained their form and fired off a slew of shots late in the second half. Harris made a gigantic save in traffic during that stretch, and the Mustangs did a great job throughout the course of the match of not losing their marks on rebounds — something they struggled with in a 5-2 loss to Ridgeline last week.

“Jade, I thought, did a great job of wrapping the balls up today when we could,” Hyatt said. “She made some great saves for us, and then also with our defense, we did a better job of covering the back side so they didn’t have those opportunities today. You know, they scored different goals than they scored the last time we played them, so I was happy to see that we cleaned that up and fixed that problem.”

It’s a good thing Mountain Crest marked up well, otherwise it would have faced a larger deficit at halftime. The Riverhawks had several legitimate scoring opportunities, but were a bit unlucky when Rasmussen unleashed a screamer off the crossbar and when they skyed a point-blank shot over the goal. Additionally, the Mustangs defended an indirect free kick from 15 yards out very well.

Nevertheless, Ridgeline did dent the scoreboard on a very well pieced together goal with nine minutes remaining in the opening half. Ellie Kotter made a nice run down the right flank and whipped in a cross to Addie Zollinger, whose lovely back pass found the feet of Rasmussen, who ripped an unsavable shot inside the far post.

The Riverhawks outshot the Mustangs 13-1 during the first 40 minutes of play and also enjoyed a 3-0 edge in corner kicks. Nonetheless, Mountain Crest gamely weathered the storm and gave itself a chance in the second half.

“The second half was for sure intense,” said Rasmussen, whose side improved to 2-1 against the Mustangs this season. “I think in future games we need to come out and put more (goals) away in the first half, so we don’t have to be so frantic and nervous and having to score at the end. But overall, we picked it up in the last part of the second half and got the win.”

A couple of really good teams from Cache Valley have been eliminated this postseason in a shootout — Logan in the second round and Green Canyon in the quarterfinals — and Van Yperen was motivated to avoid that potential scenario.

“Oh my gosh, Mountain Crest always brings their A game against us,” Van Yperen said. “They always perform so well, so it felt really good to be able to get that goal in the last two minutes ... because overtime’s kind of stressful and so are PKs. We haven’t been in PKs all region (season) and they’ve gone into them a couple of times, so they would have been pretty well-prepared for that.”

The only team standing in Ridgeline’s way of a second consecutive trip to the 4A championship match is 10th-seeded Pine View, which upset No. 2 Green Canyon in a shootout. The two teams will play next Thursday at 7 p.m. at Real Salt Lake’s Rio Tinto Stadium.

Defending 4A state champion Ogden scored both of its goals during the first 25 minutes en route to extending its winning streak to 14. The top-seeded Tigers (15-1) earned their 13th shutout of the season in the process, but it wasn’t easy.

Sky View (11-7) had two really good scoring chances in the opening half — the first on a one-v-one by Addie Poulsen, and the second on a shot inside the 18-yard box by Macy Hellstern that Ogden keeper Allison Collingwood tipped off the crossbar.

“Yeah, it think it could have changed (the course of the match) for sure had we capitalized on a couple of those shots, but regardless we played our hearts out and did the best we could,” SV head coach Jillian Carver said.

Both teams defended well in the second half, and the ninth-seeded Bobcats were able to keep an explosive Ogden attack in check.

“I’m just super, duper proud of these girls,” Carver said. “They learned so much this year in terms of soccer and in terms of coming together as a team, and I’m just super proud of where we started and where we ended. We came a long way together and, yeah ... we had some good games and some not so good games, but I think the girls learned from those not to good games, which makes all the difference in the world.”

Ogden will square off against Crimson Cliffs in the first of two semifinal matches next Thursday. The 12th-seeded Mustangs outlasted No. 13 Snow Canyon 2-1 in double overtime to advance.