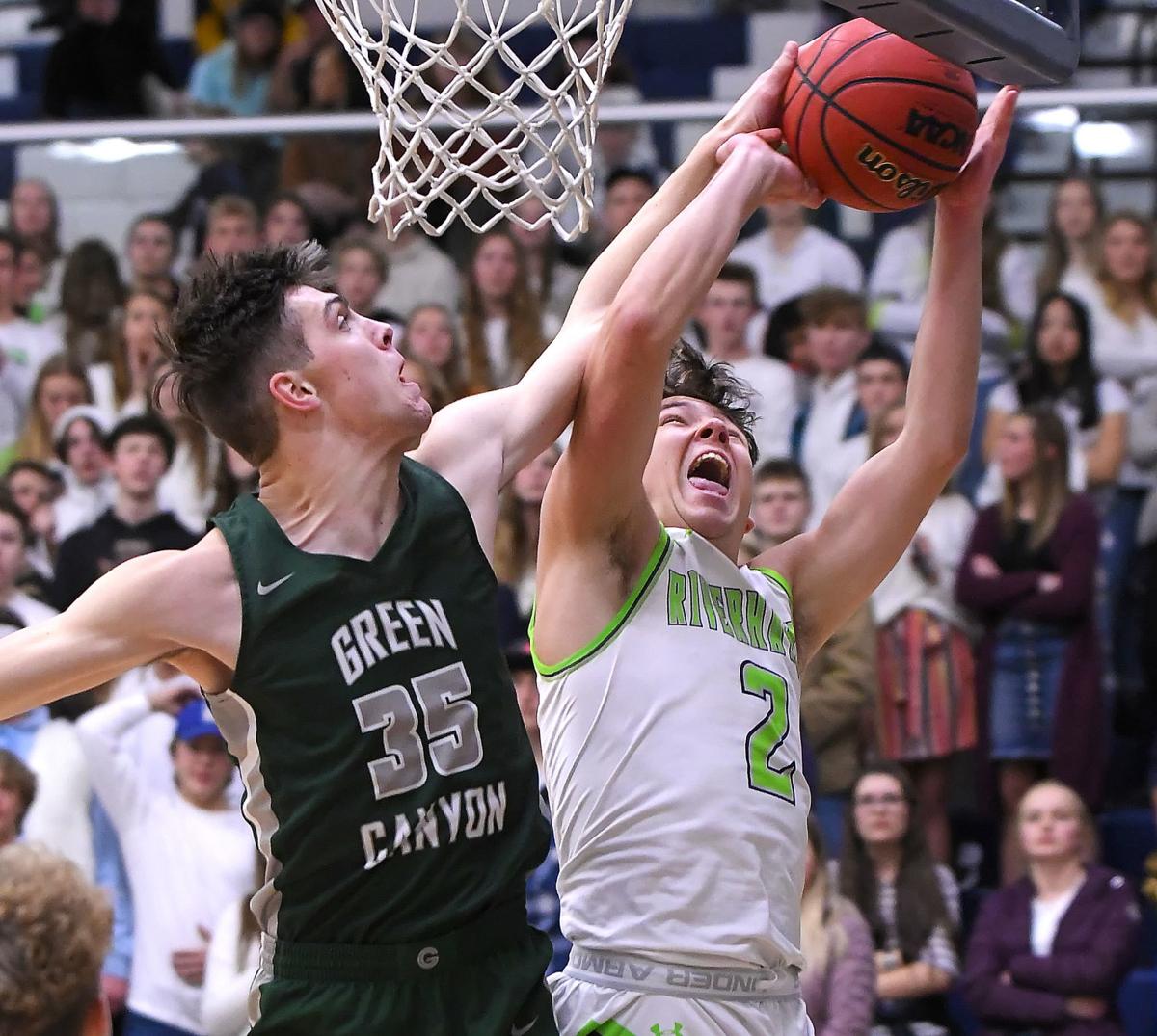 Ridgeline’s Jackson Baker (2) gets fouled by Green Canyon’s Caleb Robison as he shoots the ball on Friday in Millville. To view more photos from the game, go to hjnews.com. 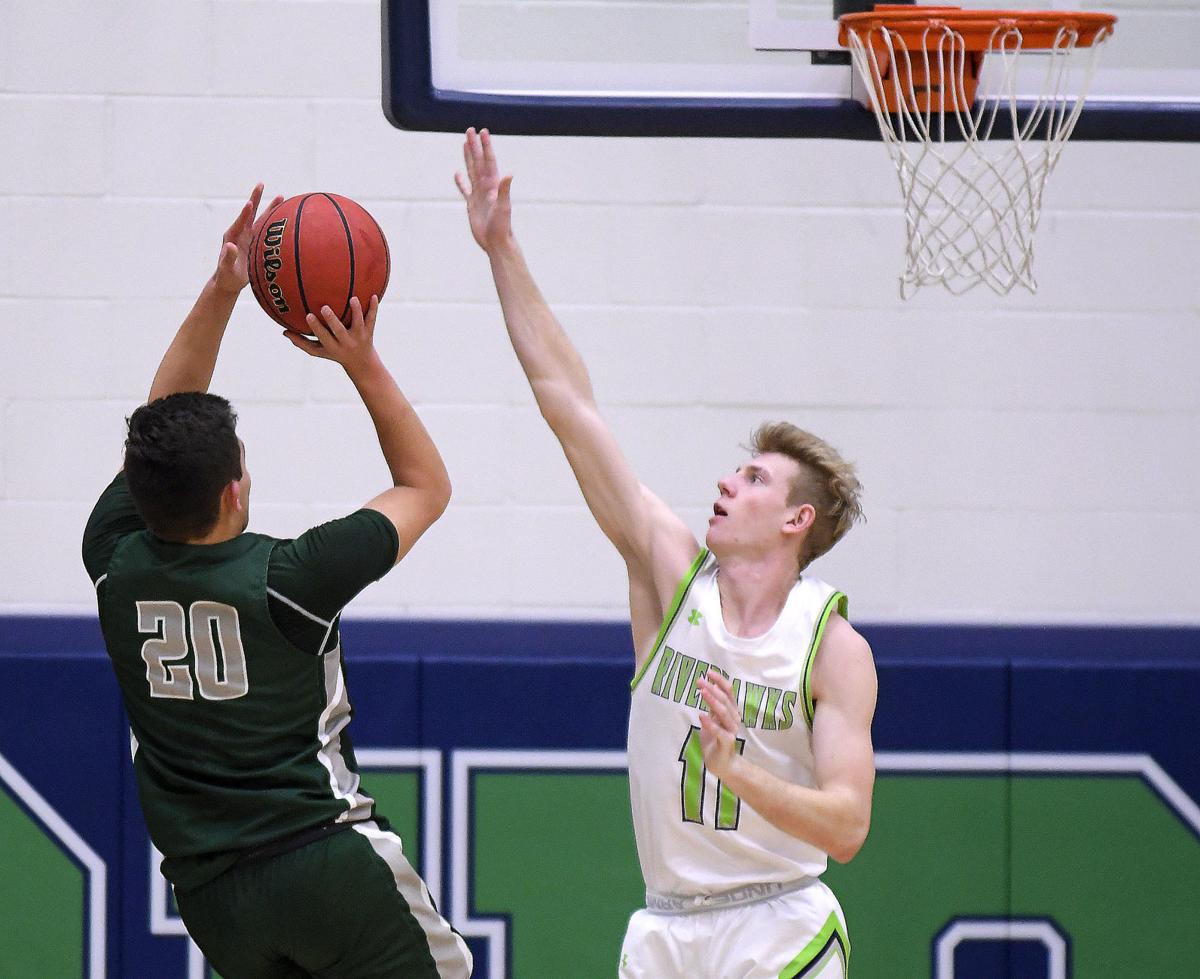 Ridgeline’s Jackson Baker (2) gets fouled by Green Canyon’s Caleb Robison as he shoots the ball on Friday in Millville. To view more photos from the game, go to hjnews.com.

MILLVILLE — A series of crisp passes around the perimeter opened up some space for Kyler Hansen to take, and make, a 3-point shot to give Ridgeline a 54-32 lead with just one minute off the clock in the fourth quarter.

This was Ridgeline’s largest lead over Green Canyon on the night, but the play is equally significant for two reasons: the ball movement that opened up the shot for Hansen and the discipline that allowed the Riverhawks to lead by such a wide margin.

Unselfishness and defensive tenacity were the two building blocks in the foundation of Ridgeline’s 67-49 win against Green Canyon in the opening game of Region 11 boys basketball action Friday night.

In addition, the Wolves had one of their most disappointing games shooting the ball all season, making less than 30 percent of their 4-point attempts. The often-effective press that the team likes to run was easily broken by Ridgeline from the first whistle, something head coach Kyle Day anticipated in this matchup.

“Yeah we had seen that on film, but also, we played a lot of teams that pressured in the preseason,” he said. “We played a really difficult preseason and that helped prepare us for that moment and we broke it really well in the first half.”

That was not the only area of the game that was helped by Ridgeline’s tough preseason competition. Point guard Chase Hall was instrumental in the team’s ability to pass through the press and make plays on the offensive end. And almost without fail, he found the best-possible scoring option, giving the Riverhawks a strong advantage.

Hall’s 13 points were one shy of the team lead, but his four assists and three offensive rebounds were equally as effective in the team’s overall mission to score points as efficiently as possible.

For Green Canyon, scoring didn’t come easily. But players like Mckay Yorgason and Cole Deboard kept the team in the game for as long as possible, contributing 29 of 49 points in the game.

Just as things started looking up for the Wolves heading into the third quarter, Ridgeline put the clamps on and allowed just five points in the period. Although two of his blocks came in the first half, forward Peyton Knowles sent another to the stands in the quarter, just one of many things he did throughout the game to give Ridgeline the edge.

“Peyton Knowles does such an amazing job in the middle. A lot of what he does people don’t quite see in the statline,” Day said. “He does an incredible job and allows us to play defense the way we want to play. And as a group they did a tremendous job defensively, especially in that third quarter.”

There was a brief moment at the beginning of the third quarter when Green Canyon’s press was back on and was giving the Riverhawks fits. On multiple occasions, Yorgason or one of his teammates would force a Ridgeline player into a trap on the sidelines, but the calls didn’t go in favor of the away team and often led to fouls on Green Canyon. Through all of their efforts, the Wolves held their opponents to 13 points in the third quarter, but the shots weren’t falling and the scoring chances froze up.

A lot can be said about Ridgeline’s depth, when its leading scorer this season (Kaden Cox) and leading scorer on the night (Jackson Baker), are not the focal points of such a convincing win. Cox stepped up when the team needed him to , and Baker was a constant force on the inside, cleaning up rebounds and putting back chances — all the while not mentioning the hustle and aggression both players brought to the press the Riverhawks ran toward the end of the game.

This just highlights the nature of the team, at least in the eyes of its head coach.

“We’ve got a lot of skilled guys that really know how to play together and the biggest thing right now is they are playing unselfish basketball,” Day said. “There are seniors on this team that if they really wanted to could start jacking up shots and be selfish, but they’ve sacrificed to let the ball find the best shot and that’s our mantra.”

Before Friday night’s contest, both teams were square at 7-5 in the standings, each having dropped games at the beginning of the season to elite teams around the state. In fact, a one-point loss at Westlake just a week ago is all that separates Ridgeline from what would be an nine-game winning streak. It’s just one win in region play, but it’s one that gives Ridgeline some confidence heading into a tough week ahead.

“You know our region is always tough,” Day said. “Sky View is obviously the big monster up in the north, Bear River is tough with those two guards and we have both of them next week.”

Sky View made a huge statement in a showdown of the two teams that squared of in last year’s 4A state championship game. The Bobcats jumped out to a 27-13 lead after the first quarter and never looked back in blowing out Bear River on the road.

Sky View took a whopping 70-35 lead into the fourth quarter. The Bobcats (10-2, 1-0) knocked down 15 3-pointers, including seven by Mason Falslev, who racked up 32 points. Sam Phipps finished with 18 points for Sky View, while Taydem Neal added nine — all on shots from beyond the arc.

“Kids came out focused and ready to go,” SV head coach Kirk Hillyard said. “It was a packed house, great environment. Taydem and Caden (Penrose) came out shooting the ball very well and made a few (3-pointers) to get us going. Bracken (Schumann) and Sam did a great job in the middle with blocks and rebounds. Mason was finding people and it was just a fun atmosphere.”

Logan narrowly outscored visiting Mountain Crest in every quarter en route to increasing its winning streak to three. The Grizzlies (5-8, 1-0) limited the Mustangs (1-10, 0-1) to no more than 13 points in any quarter.

“Our team defense was really good tonight,” Logan head coach Logan Brown said. “Our kids did a great job of protecting our home court. Ike Larsen was impressive on both ends of the floor and, as a team, we did a good job of executing when we needed to. We have a fun team that keeps getting better.”

Isaac Larsen tallied a team-high 16 points for Logan, which got a combined 22 points from Isaac Tuft and Jadin Penigar. The Grizzlies drained seven treys.

It was a challenging night for both Franklin County teams. Preston was outscored by 10 points in the fourth quarter and suffered its first district loss, 49-42 to Jerome on the road, while West Side fell at home to Marsh Valley, 53-29.

The Indians (12-3, 6-1) never led in the opening half, but outplayed the Tigers (11-4, 6-2) in the the third quarter and took a 32-29 advantage into the final eight minutes of action. Unfortunately for Preston, it was undone by turnovers in the fourth quarter, and Jerome took advantage by going on a 12-0 run.

Hailey Meek paced Preston with 13 points, and Mickayla Robertson chipped in with 11. The Indians had won five consecutive games and 10 of their last 11.

Meanwhile, West Side (1-13) was outscored 33-11 in the second half by Marsh Valley (8-7). Kajsia Fuller scored more than half of the Pirates’ points as she finished with 15. Kenlee Nance contributed with seven points.

“We played very well in the first half, but we fell apart during the second half,” WS head coach Bob Sorensen said. “We played at a faster pace than we were used to (and) it caught up with us. Kajsia continues to be amazing, but for three quarters she was our only offense. We need to do better.”