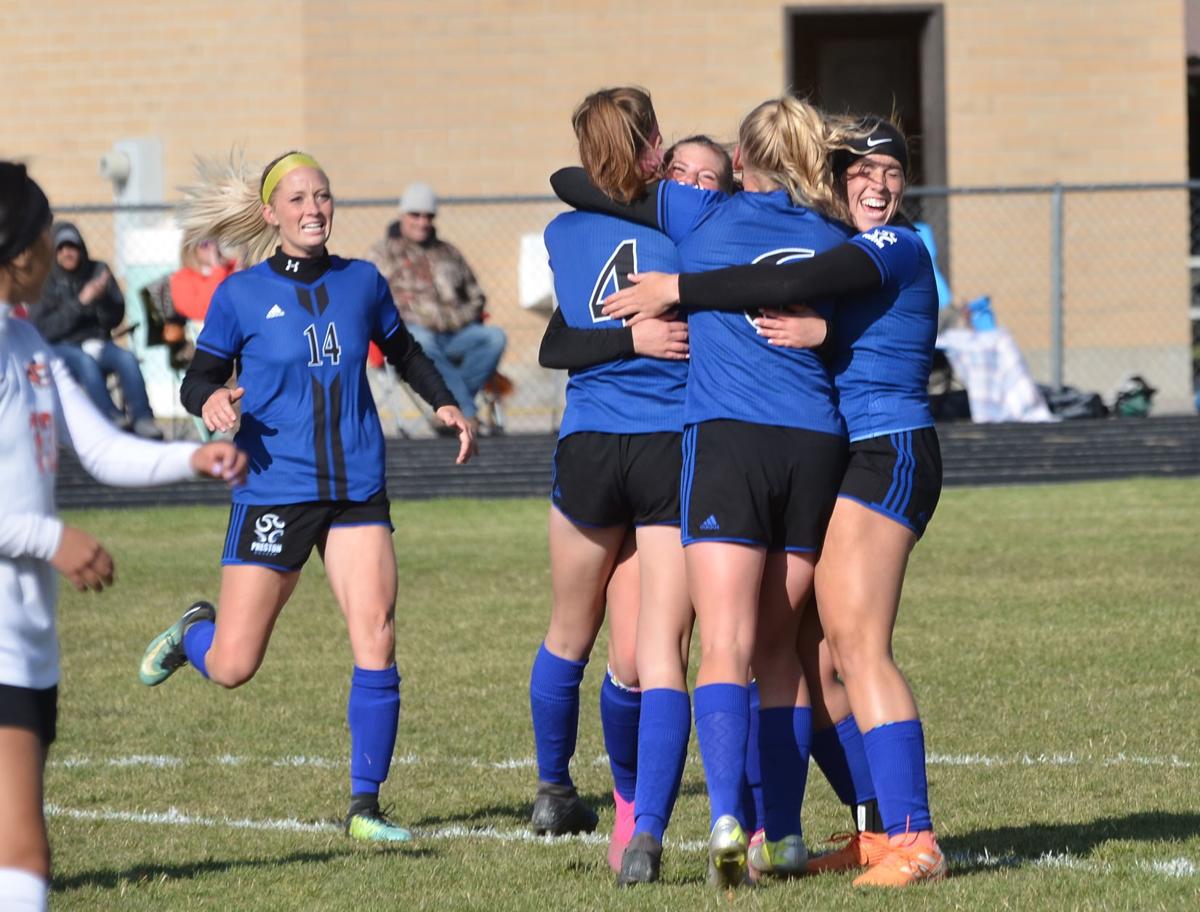 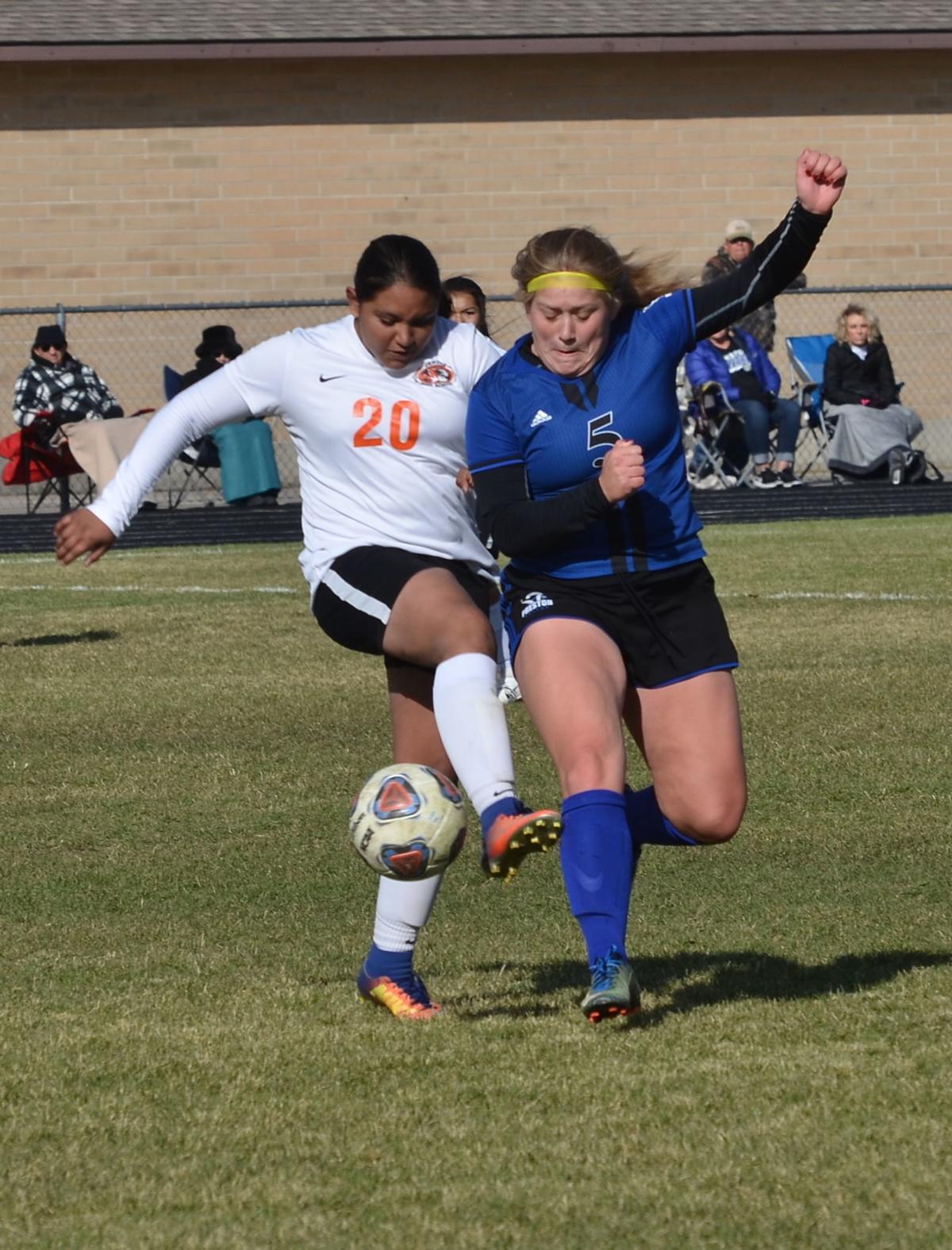 Preston's Quincy Hyde (5) battles a Jerome defender for the ball during a district tournament game on Wednesday.

Preston's Quincy Hyde (5) battles a Jerome defender for the ball during a district tournament game on Wednesday.

PRESTON — It was somewhat of a rough first half for Preston’s girls soccer team.

Although the Indians controlled the lion’s share of the first 40 minutes of action, they were unable to capitalize on any of their six shots on goal, despite playing into a pretty sizable tailwind. Additionally, leading scorer Addison Moser went down with what appeared to be a serious knee injury.

Third-seeded Preston didn’t panic, though. Instead, the Indians regrouped and scored twice into the teeth of a formidable headwind in the second half and earned a 2-0 victory over sixth-seeded Jerome in the 4A District 4-5 Tournament on a chilly Wednesday afternoon.

“We had chances in the first half that we didn’t capitalize on ... and in these type of games you have to take advantage of them,” Preston head coach Brandon Lyon said. “But to the girls’ credit, at halftime we talked about some adjustments we needed to make, and obviously we’re a different type of attacking team without Addie on the field. And we talked about the adjustments we had to make, and the girls did a great job in the second half of making those adjustments.”

The Indians (10-4-2) finally broke through in the 47th minute when senior Millie Chatterton buried a shot from about 12 yards out.

“It feels pretty good to know that I got that goal in for our team,” Chatterton said.

It was sweet redemption for Chatterton, who had a golden opportunity to score on a point-blank rebound in the first half. Moser uncorked a dipping shot that was saved by Jerome goalkeeper Hannah Schvaneveldt. However, Schvaneveldt wasn’t able to handle Moser’s strike cleanly, but was fortunate when Chatterton scuffed the rebound.

No. 4 certainly made the most of her next chance, though.

“Every big game this year, Millie has found a way to put the ball in the back of the net and she has that little extra edge that she plays with, and sometimes you need that,” Lyon said. “So, I’m really proud of her for always stepping in, stepping up and being ready.”

Chatterton’s goal seemed to provide a little bit of a wake-up call for Jerome (6-8-1), which didn’t attempt a single shot or earn any corner kicks in the opening half. However, the Tigers did have three pretty dangerous opportunities to equalize 10 or so minutes after Chatterton put them in a hole.

Jerome was finally able to get standout midfielder Makali Nance more involved in the attack, but Preston was ultimately up to the challenge.

“I’m really proud of how our defense played,” Preston star center back Kylie Larsen said. “(My teammates) helped me and we just work well as a team, and the offense did their job, so I’m proud of that as well.”

The Indians got that always important insurance goal with about 13 minutes remaining in the match. The Tigers were unable to clear a ball out of danger, and Preston’s Ragen Rich chipped in to the back post, where teammate Quincy Hyde was waiting to head it in.

Hyde was a bit unlucky not to score in the first half, and she consistently gave Jerome fits with her flip throw-in. The junior sent at least seven flip throw-ins into the heart of the 18-yard box.

“Oh, that’s an amazing (weapon),” Larsen said. “You can get it from nearly anywhere on the field. It’s just like a corner kick and it’s anybody’s (ball), really. Just get on the end of it and anybody can get a goal, honestly.”

Moser was wreaking havoc for the hosts in the attack as she fired off four shots on frame before suffering her injury with about 15 minutes remaining in the first half. Preston’s offense definitely struggled for a while without No. 13 on the pitch.

“Addie does a lot for our team, so it took some time to adjust,” Chatterton said.

Fortunately for the Indians, they figured out a way to score without Moser and earned the right to square off against second-seeded Pocatello on Saturday afternoon at 1 p.m. on the road. Preston will punch its ticket to the state tournament with a win in that game.

Sydnee Marlow went the distance in goal for Preston, made one save and commanded her box very well en route to her seventh shutout of the season.

Cassee Pugmire came off the bench and gave the Indians a big boost in the second half. Pugmire did a great job of making simple passes and routinely used her length to successfully shield and fend off Jerome players.

“We ask all of the girls, ‘be ready at any time,’ because you never know (when your number will be called),” Lyon said. “And Cassee didn’t play in the first half, but she stayed ready and she came on and made a difference.”