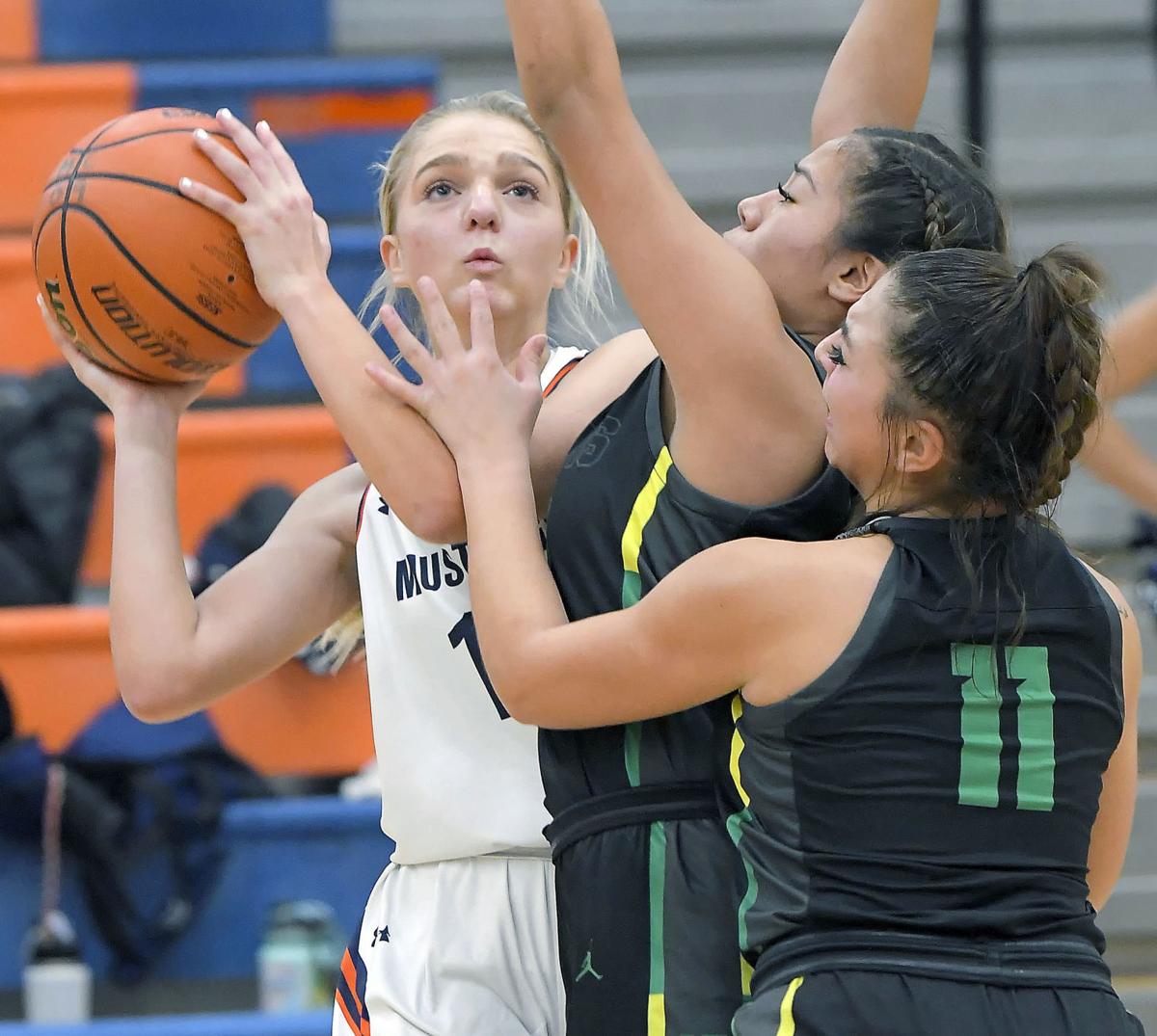 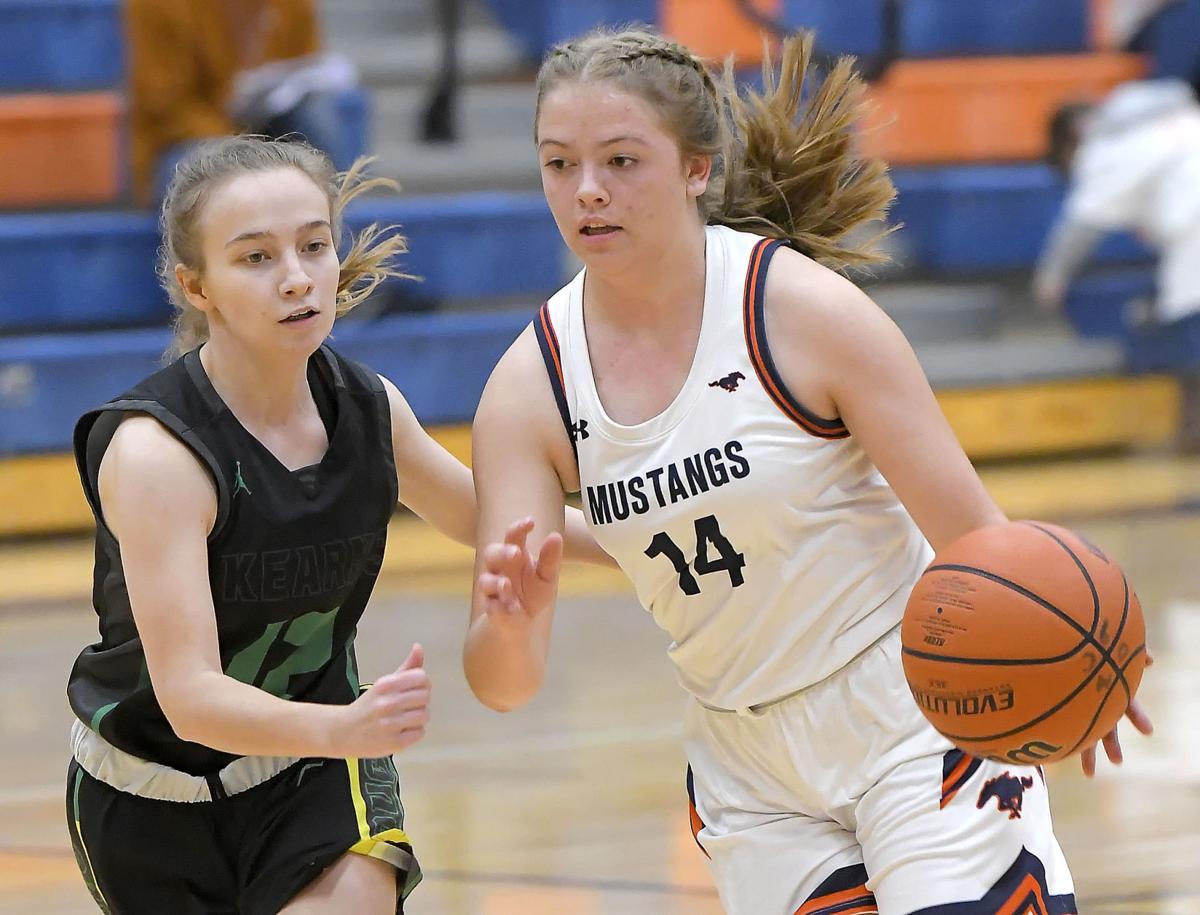 HYRUM — The Mustangs first-half offense was colder than the fresh layer of snow that blanketed Cache Valley Friday night, and it ended up being the difference as the Mountain Crest girls basketball team fell to 5A Kearns 40-32 in non-conference action.

The Mustangs shot just 3 of 20 from the field in the first two quarters, scoring seven points as opposed to the Cougars’ 19. Despite a 25-point performance in the second half — including 11 from junior Havyn Brown — the 12 point halftime deficit was just a bit too much for the hosts to overcome.

“I know we’re only juniors but at the same time it’s like we don’t get our confidence until we score our first point,” Mountain Crest head coach Megan Smith said. “We gotta figure out how to put a full game together.”

Kearns’ defense certainly deserves credit for MC’s offensive woes as the visitors were the more aggressive team in the first half, forcing nine turnovers. Nevertheless, the Mustangs couldn’t get out of their own way. Mountain Crest found some open shots, but just couldn’t hit them. The Mustangs got offensive rebounds, but couldn’t make the putbacks. There was little ball movement.

On the other end, Kearns (2-1) was attacking the basket and getting looks for its center Emma Mumford — who would finish with 14 points — and controlling the tempo of the game.

But the effort and performance level was elevated for Mountain Crest in the second half. The Mustangs came out and immediately got a 3-pointer from Lexie Coggins and a three-point play from Sadie Coggins cut the lead to seven.

“What we talked about at halftime was just playing together as a team and that our hustle and our effort was nothing that first half,” Smith said. “We got a little intense, we got a little more passionate about the plays and I think that really helped. We also started driving more in the second half and that really helped because it got us to the line and it also opened up some shots for us on the outside as we attacked and kicked.”

With the Mustangs on attack mode, their three-two zone defense started getting stops and forcing turnovers as they forced nine Kearns turnovers in the second half, and they managed to get open looks on the other end for their best shooters. Brown hit a pair of 3-pointers in the third quarter, the second putting MC down just two points at 23-21. The hosts shot a much improved 5 for 12 from the field in the quarter.

But the Cougars responded. A corner 3-ball from Erika Warner at the end of the quarter extended the Kearns lead to five. And in the final quarter, Kearns guard Atatasi took over. She was able to weave through the Mustangs’ full-court pressure with ease, getting layups and getting to the free-throw line. She finished with seven points in the fourth.

Mountain Crest continued to battle, getting into the bonus and hitting shots at the charity stripe. The Mustangs were down 37-32 with a minute to play and a chance to come back, but failed to hit difficult shots that would have narrowed the gap.

The young Lady Mustangs — they have zero seniors on the roster — are understandably still trying to figure things out three games into the season.

“It’s a roller coaster right now and not to get into the 2020 field, but we want to shorten the curve,” said Smith. “We don’t want these ups and downs. We want to start to get a little bit more consistent, and I think we will as we continue to practice, as we continue to play. I challenged them tonight to wipe this game away and come ready with a clean slate tomorrow ready to play hard.”