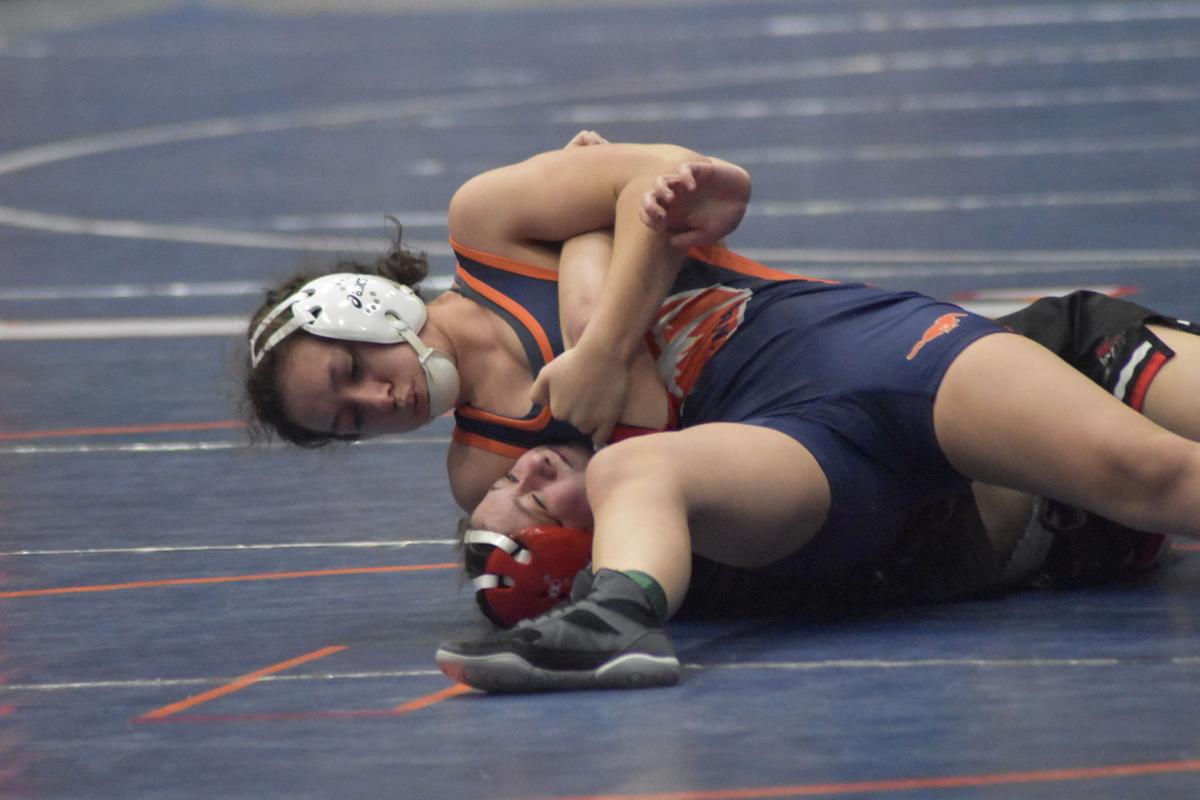 Mountain Crest’s Jalise Wakley puts her opponent in a headlock at the 4A Girls State Wrestling Championship last Saturday in Richfield. Wakley was the champion at 124 pounds. 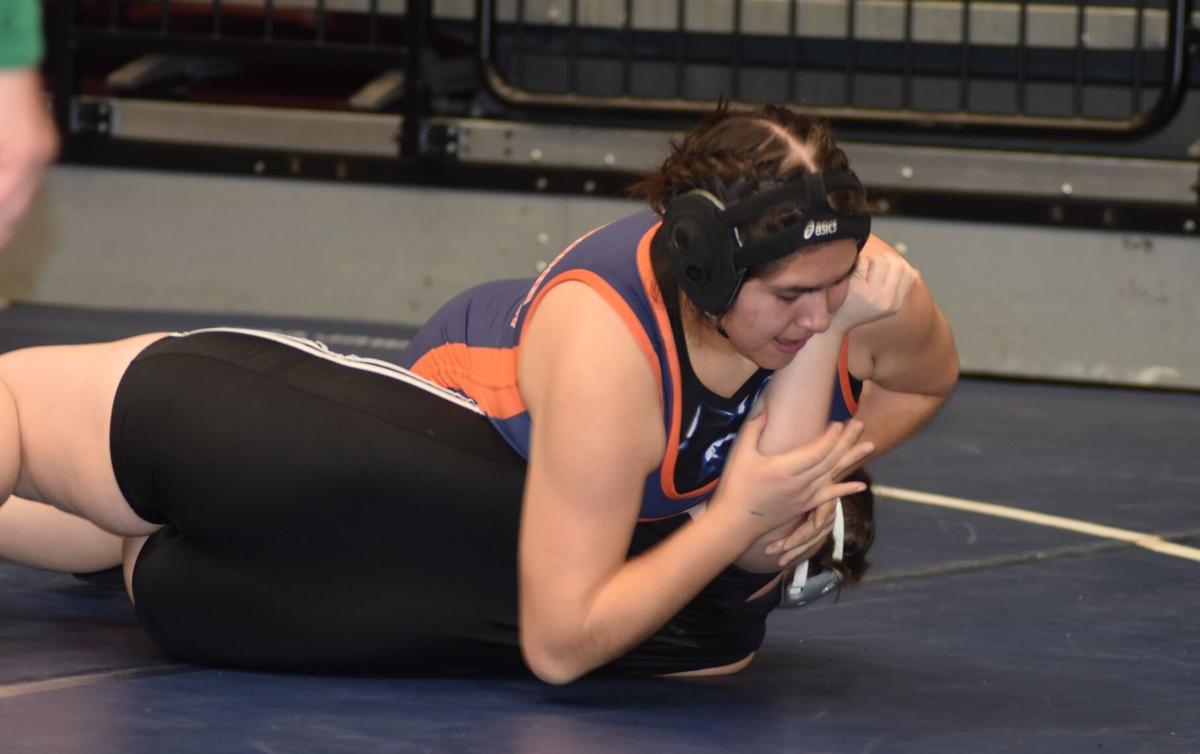 Mountain Crest’s Sheccid Alvarado earns back points against her opponent at the 4A Girls State Wrestling Championships last Saturday at Richfield. Alvarado won the title at 190 pounds. 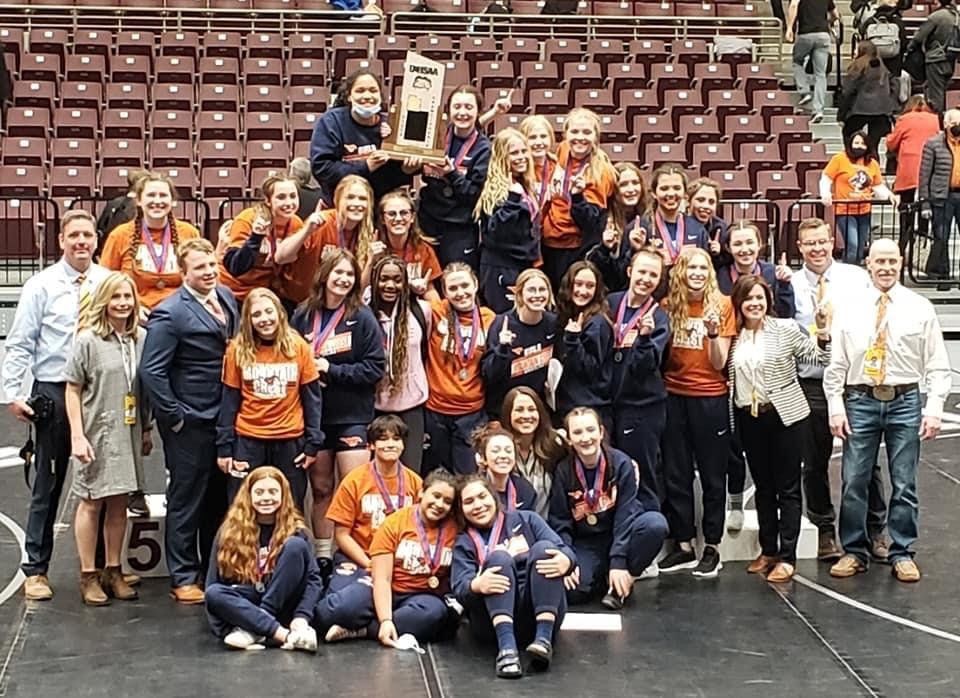 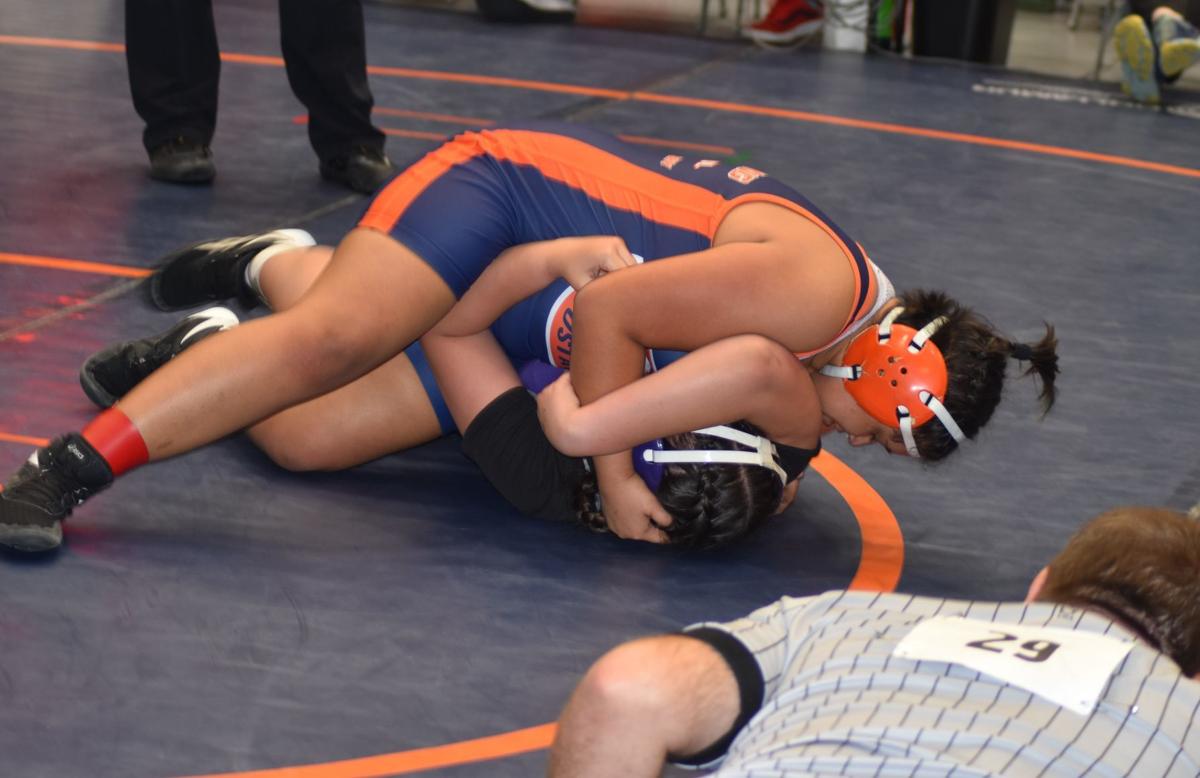 Mountain Crest's Rosa Campos was the 4A state champion in the 170-pound weight class. 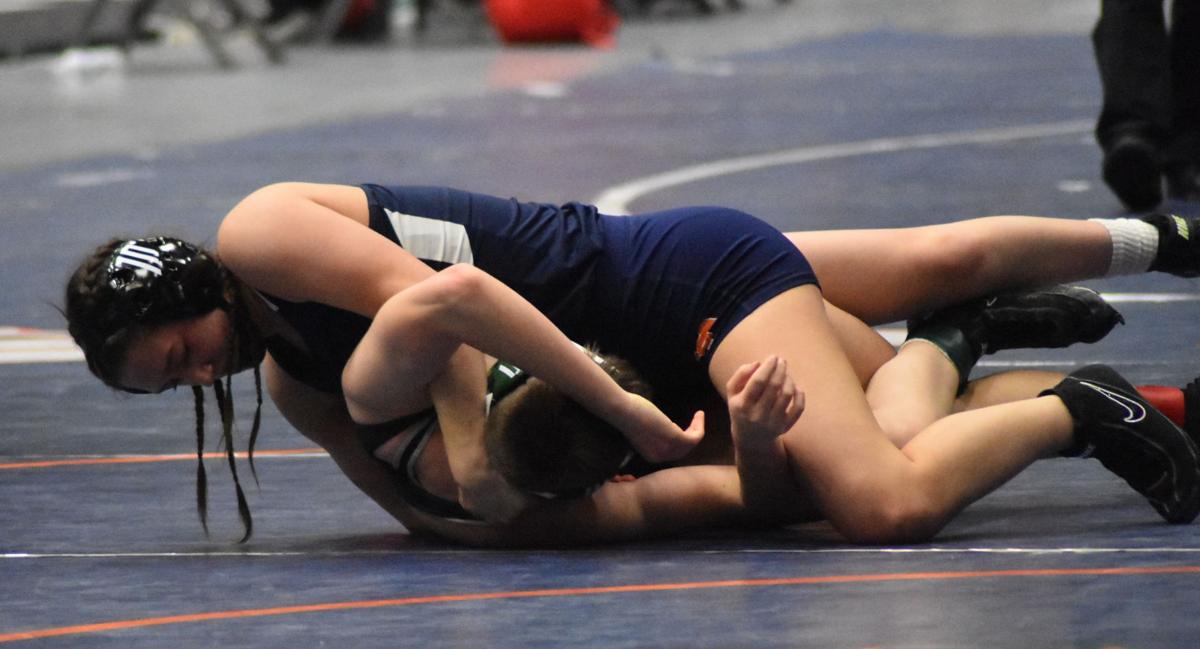 Mountain Crest's Ella DeKorver was the 4A state champion at 132 pounds. 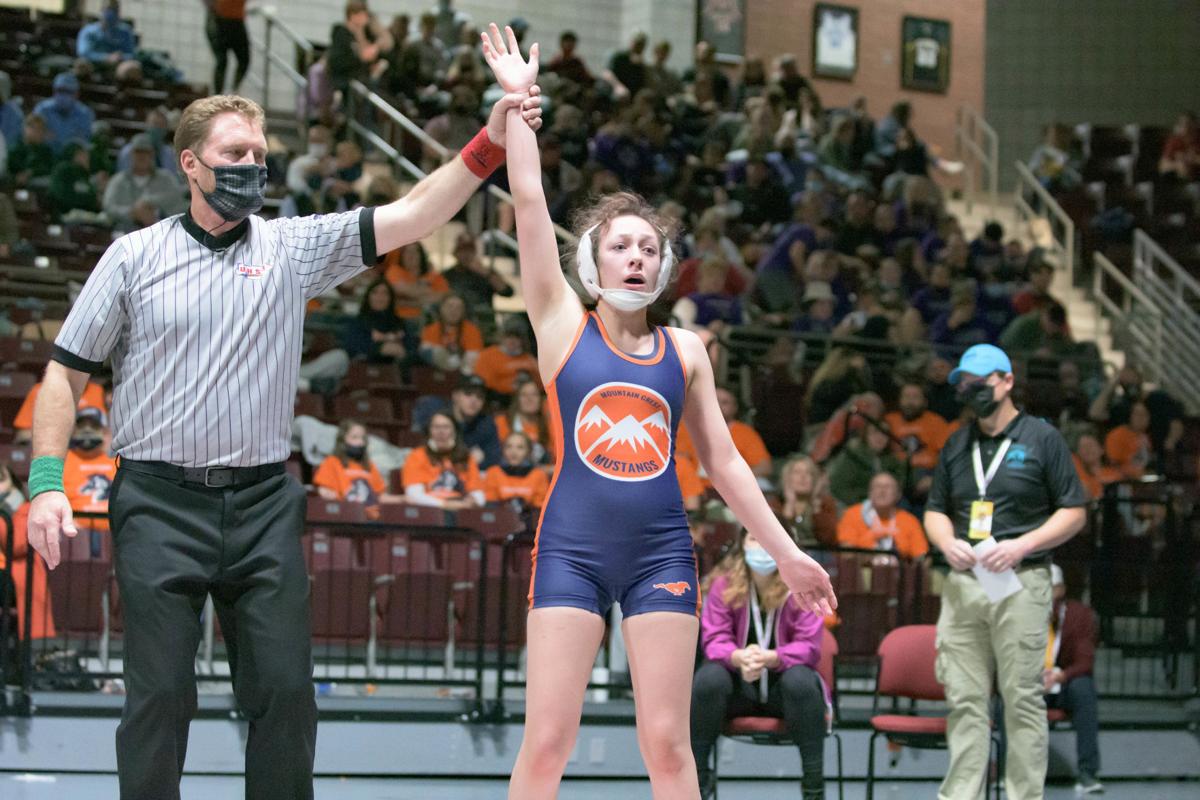 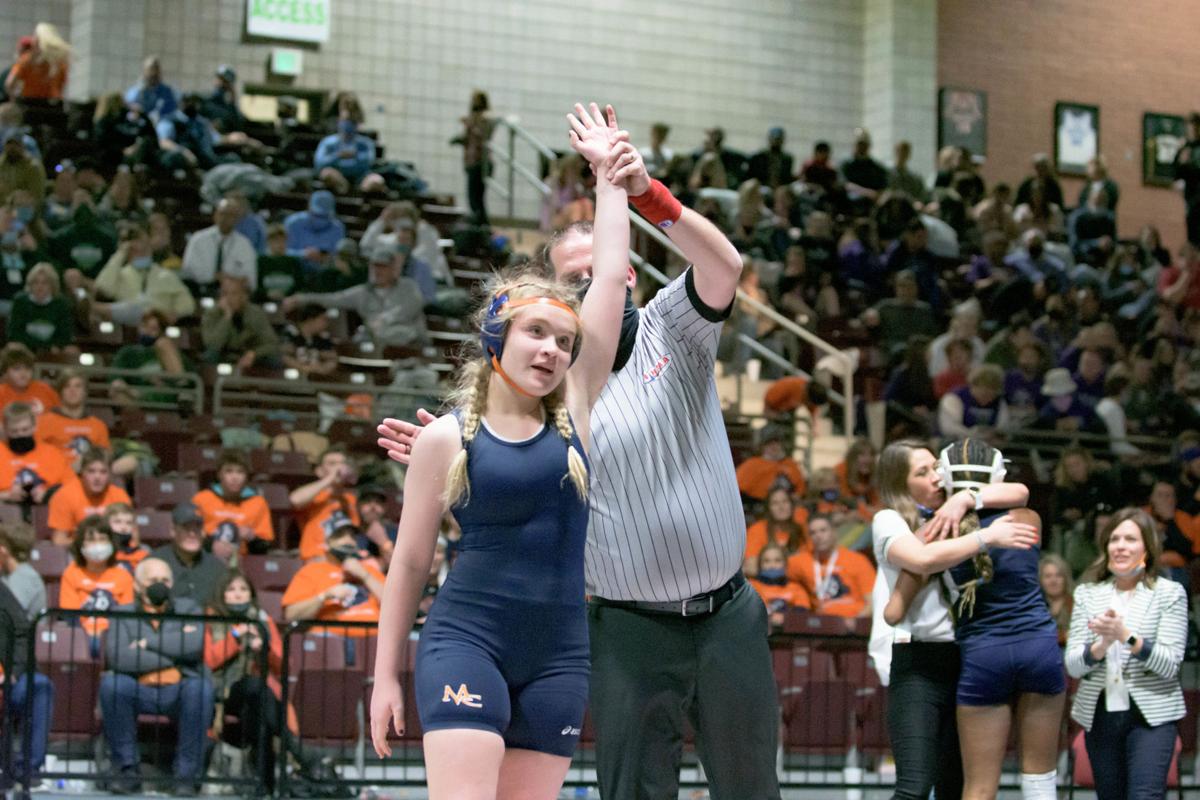 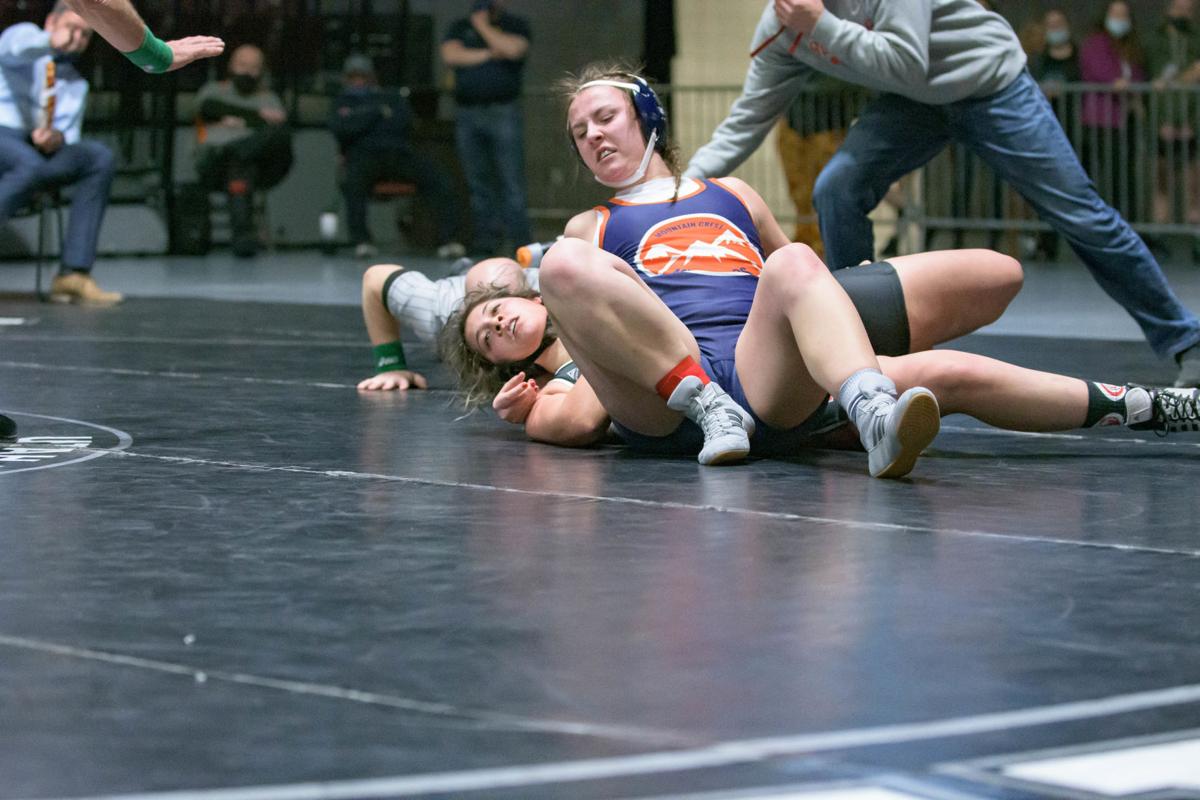 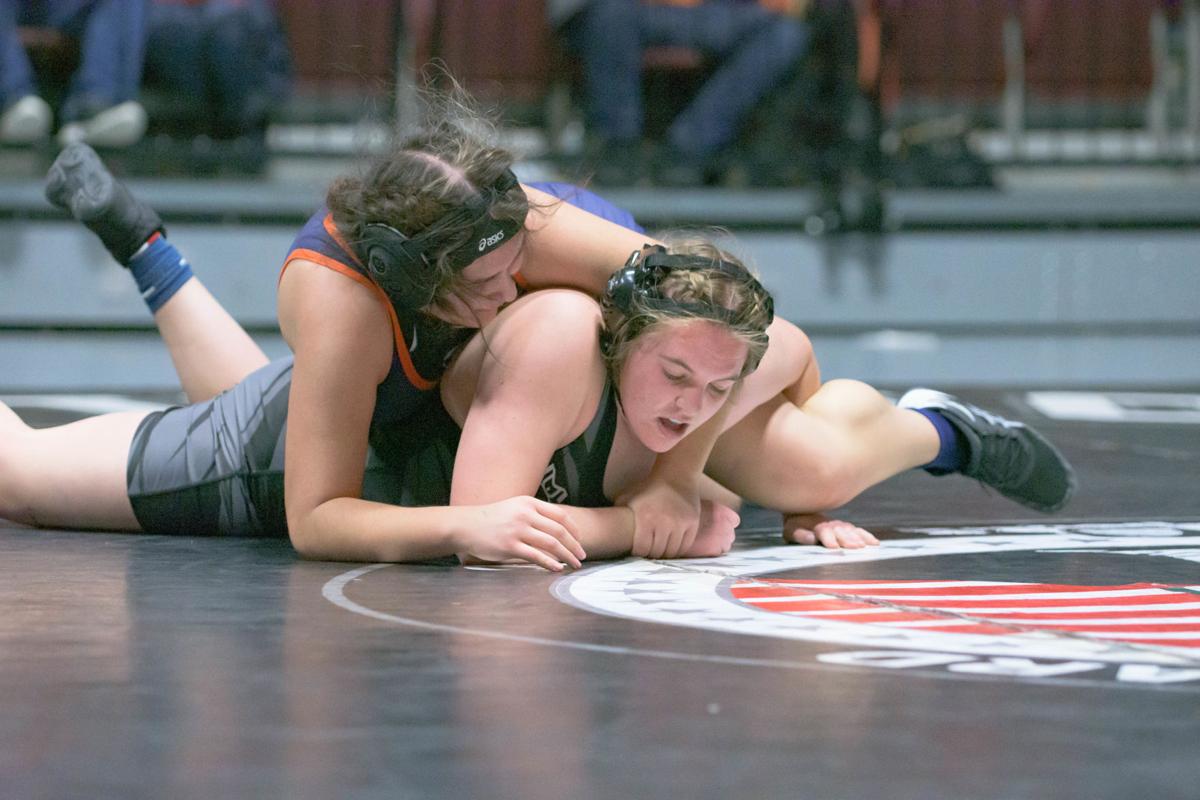 Mountain Crest’s Jalise Wakley puts her opponent in a headlock at the 4A Girls State Wrestling Championship last Saturday in Richfield. Wakley was the champion at 124 pounds.

Mountain Crest’s Sheccid Alvarado earns back points against her opponent at the 4A Girls State Wrestling Championships last Saturday at Richfield. Alvarado won the title at 190 pounds.

Mountain Crest's Rosa Campos was the 4A state champion in the 170-pound weight class.

Mountain Crest's Ella DeKorver was the 4A state champion at 132 pounds.

To say the inaugural season for the Mountain Crest girls wrestling program was a smashing success might be an understatement.

The Lady Mustangs certainly made the most of the 2020-21 campaign as they dominated the rest of the teams in their classification from a talent, depth and sheer interest standpoint. Mountain Crest racked up an astounding 427 points at the 4A State Championships on Saturday at the Sevier Valley Center in Richfield.

This was the first academic year girls wrestling was sanctioned by the UHSAA. Several teams around the state only had a few girls come out for the inaugural season, but not Mountain Crest.

“I’ve grown up watching my brothers wrestle and have always loved the sport, so when I heard there was gonna be a girls team, I knew I had to give it a try,” Mustang senior Hanna Evans said. “Going into that room I had no clue who half the girls were, but now walking out I know I have a family behind me who has my back, and I have grown to love them so much. We’ve been through some tough things, but we are strong, we are powerful and we are changing history. And I’m thankful for the opportunity to wrestle with my girls this year at Mountain Crest.”

The Mustangs had more than 30 girls participate this winter, including 26 competitors at the state tournament, which was 12 more than Bear River. Cedar was the only other 4A program with more than 10 athletes at state and just barely as the Reds had 11.

The bad news for opposing teams is most of those Mustang finalists will be back next season. One local grappler who will be moving on is Ridgeline’s Grace Montierth, but she was able to cap off an outstanding prep career with another win.

The senior took down Uintah’s Maddison Tenney midway through the second round and quickly pinned her in a half nelson for the 4A title at 245 pounds. Montierth also won state championships as a sophomore and junior when girls wrestling was still a club sport.

“This means a lot to me,” Montierth said. “I’m very grateful for the opportunity to be able to end my high school career as a three-time state champion. Wrestling has been such a big influence in my life and I am so grateful for all the things I’ve been able to learn and achieve.”

Montierth was now turn her attention to competing at the next level.

“I’m signed with Hastings College and I’ll be wrestling for coach Cara Romeike this fall,” she said. “I’m really excited that my wrestling career doesn’t have to end tonight and that I can progress throughout my collegiate career as well.”

Montierth was one of five athletes who represented Ridgeline at the tourney. The other four also left Sevier County with medals.

Grace Tallmadge (115) and Madelyn Topham (128) were finalists for the Riverhawks, while Makayla Pigmataro was fourth at 170. Topham lost in the finals to Bear River’s Cierra MacFarlane, and the first two rounds were very competitive.

As for the Mustangs, three of their individual gold medals were captured in thrilling fashion. Wakley and DeKorver overcame late deficits and prevailed in the final seconds of the third round, while Alvarado won on a takedown with 13 seconds remaining in overtime.

Wakley trailed Tessa Campbell 10-6 before reversing the Canyon View grappler to her back in the waning seconds to steal a 11-10 victory.

“Honestly, I didn’t know I had won until I looked at my coaches,” Wakley said. “I gave it my all, so it was the best feeling knowing it paid off.”

DeKorver faced a 11-7 deficit in the third round against Maycee Young, but the Uintah wrestler was whistled for three illegal locks, which helped DeKorver pull even. The Mustang junior then executed a five-point move with just a few seconds on the clock to secure a 16-11 win.

“I was very proud of myself and it took a lot of heart, but I couldn’t have done it without my coaches and teammate cheering my on to keep pushing through,” said DeKorver, who like Wakley needed to win four matches to capture her title.

Alvarado was two seconds away from beating Canyon View’s Jaylie Roden in regulation, but Roden managed to get an escape point. To their credit, the Mountain Crest junior made the most of her second opportunity.

“Every single day of practice, we practiced a live match with our teammates and we would do (an) overtime (scenario),” Alvarado said. “After that, we would have two minutes of sprawls non-stop. It kept me in condition, but during my match my coach Holli told me to ‘do it for your mom and dad.’ Personally, it gave me motivation to finish it.”

Mountain Crest’s other three champs — Evans, Hansen and Campos — were all triumphant in pinning fashion. Evans squared off against a teammate (Longson) in the finals, as did Campos (Stabile), while Hansen faced Green Canyon’s Kiah Saurey. All three of Campos’ victories at the tourney were by fall.

Evans was able to watch her younger older, Easton, win a state title at 106 pounds, earlier in the evening.

“I couldn’t be more thankful for him,” Evans said. “He’s one of the hardest working kids in that room and he gives it his all in everthing he does. It definitely was one of the best feelings just knowing me and my brother won it together. He has taught me all I know. I always love watching him wrestle and watching him achieve his goals.”

In addition to Saurey, the Wolves were represented at the tourney by three other girls. All four of them placed as Brook Harris was third (at 132), Gracie Blake fourth (136) and Jaiden Cuff sixth (140).

Logan had three competitors at state and all three of them tasted victory at least once. Two Grizzlies, Sierra Egbert (fifth, 120) and Sydney Crowley (fifth, 140), left with medals.

A pair of Sky View wrestlers traveled to Richfield and one of them, Dika Dekar (fifth, 128), got to stand on the podium.