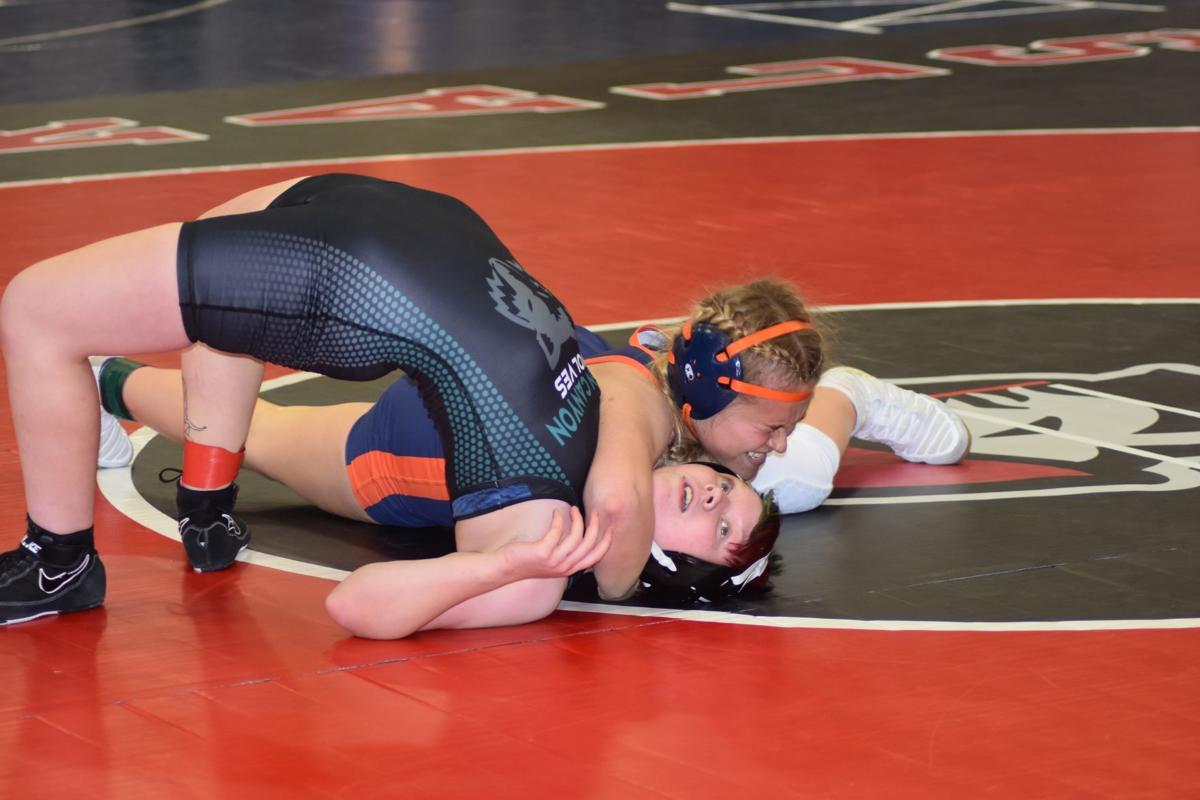 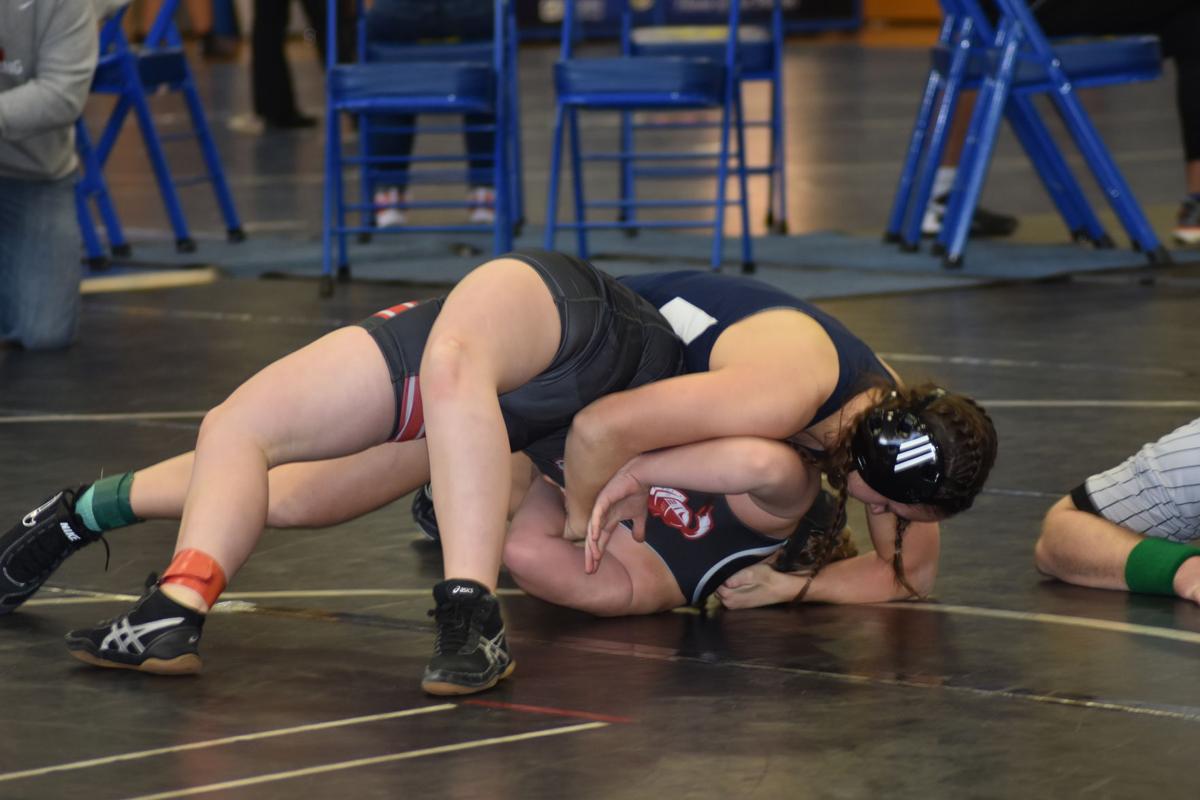 It was a successful return from the holiday break for the Mountain Crest girls wrestling program.

The Lady Mustangs dominated a dual with Layton on Dec. 31, and then finished second out of 18 teams at the Cyprus-hosted Lady Pirates Invitational two days later. It was also a good tournament for Ridgeline and Green Canyon as both teams had at least two medalists.

Mountain Crest brought 25 wrestlers to the one-day tourney and 10 of them earned a spot on the podium, including a couple JV competitors. Of those 10 Mustang placers, five of them made it to the finals and two of them reigned supreme.

Laci Larsen (136 pounds) and Hanna Evans (140) captured titles for the Mustangs. Both athletes dispatched of opponents from Green Canyon in the finals. Evans went 3-0, while Larsen went 2-0.

Mountain Crest’s other finalists were Rylee Turnbow (115), Ella DeKorver (132) and Rosa Campos (170). Turnbow and DeKorver won three matches each en route to the championship round.

“During the holiday break we kept our heads in the game,” MC head coach Janae Liljenquist said. “The girls continued to work at home during moratorium on stance, skills and cardio. After we reconvened, we were able to hit the ground running. ... We focused and killed it during the week leading up to the Lady Pirates Invitational. ... We put in work and it’s paying off. ... We are fired up and excited for the challenge and competition of all who meet us on the mat.”

The Mustangs had a trio of consolation champions in Eastyn Nyman (124), Brooklyn Swanson (132) and Cristell Flores (136), plus Sophie Longson (140) and Sheccid Alvarado (245) also competed in third-place matches. Nyman and Swanson went a combined 8-2.

Seven Ridgeline grapplers showcased their talents at the tournament and four of them secured a spot on the podium. The Lady Riverhawks were led by 115-pounder Elise Gessell, who pinned all three of her opponents in the first round on her way to the title.

“We are feeling strong coming back from the holiday break and ready to wrestle,” Ridgeline head coach Melanie Montierth said. “... (We) placed fourth out of 18 teams at the Lady Pirates Invitational this weekend ... with only seven girls competing.”

All three Green Canyon wrestlers won at least one bout, and Brooke Harris (136) and Jaiden Cuff (140) made it to the finals.

“Jaiden Cuff, a second-year wrestler, looked great,” GC head coach Ryan Webb said. “She’s starting to figure out how to chain wrestle a bit more and that’ll pay off huge moving forward. Brooke Harris is a first-year wrestler and is picking up technique at a very fast pace. I can see (those two) competing against just about anyone in their respective weight classes in the state.”

Westlake pulled away from the rest of the field at the invitational and racked up 212.5 points. Mountain Crest finished with 152 points, which was 8.5 more than third-place Maple Mountain. Ridgeline was fourth (75 points), Bear River fifth (70) and Green Canyon 12th (38).

The Mustangs rolled to a 66-12 victory over Layton earlier in the week. Mountain Crest prevailed in six of the eight contested matches and won the other six by forfeit.

Leading the way for the Riverhawks was 152-pounder Ethan Buchanan, who won all five of his bouts by fall. Ronan Melani (195) went 3-0 for Ridgeline, with all of those victories coming in pinning fashion.

Last Saturday night was a good one for both Franklin County teams. Preston ended a three-game skid in emphatic fashion by blowing out Logan at home, 77-45. West Side rallied past Grace, 62-52, in a showdown of returning state runner-ups — the Pirates in the 2A division and the Grizzlies in the 1A division.

The Indians (6-3) outscored the Grizzlies (6-2) in every quarter, including by double digits in the second (16-6) and third (28-16). Preston big man Braden Hess was dominant as he recorded a double-double with 22 points and 10 rebounds. Hess knocked down 8 of 9 free throws.

Gabe Hammons netted 16 of his 18 points in the second half for Preston, which got 11 points from Treyger Shumway and eight assists from Cole Harris.

West Side (5-3) trailed 17-11 after the first quarter and 27-24 at the half, but took control in the second half. The Pirates won the third quarter by a 21-12 tally en route to sweeping the season series with the Grizzlies.

Bryler Shurtliff drained four 3-pointers on his way to a game-high 24 points for West Side, which got 10 points from Easton Henderson and nine from Brentan Noreen.

“We had a couple guys — Ryan Lemmon and Jackson Stewart — who hit some key threes in the second half,” WS head coach Tyler Brown told the Idaho State Journal. “Those two did great jobs and it helps out when they hit shots, then the defense can’t just focus on Bryler.”

Lexie Coggins poured in 19 points, but it wasn’t quite enough as Mountain Crest was edged on the road by 5A Bonneville, 50-45, on Monday night.

Havyn Brown chipped in with nine points for the Mustangs (5-5), who got seven points from Coggins during the final eight minutes of play.

Meanwhile, Logan (4-3) rolled to a 64-41 road triumph over Ogden. The Grizzlies outscored the Tigers 24-12 in the first quarter and never looked back.

Amber Kartchner was efficient from the field on her way to a game-high 24 points for the Grizzlies. The future BYU player drained 8 of 10 shots from 2-point range. Tawnee Tubbs chipped in with 11 points for Logan, followed by Taylor Rose with 10 and Alec Kennington with nine.

“It clicked for us tonight,” LHS head coach Morganne Madsen said. “We were able to play good team ball that was fast-paced with high energy. We ran the floor well and shared the ball, ending with 22 assists as a team.”