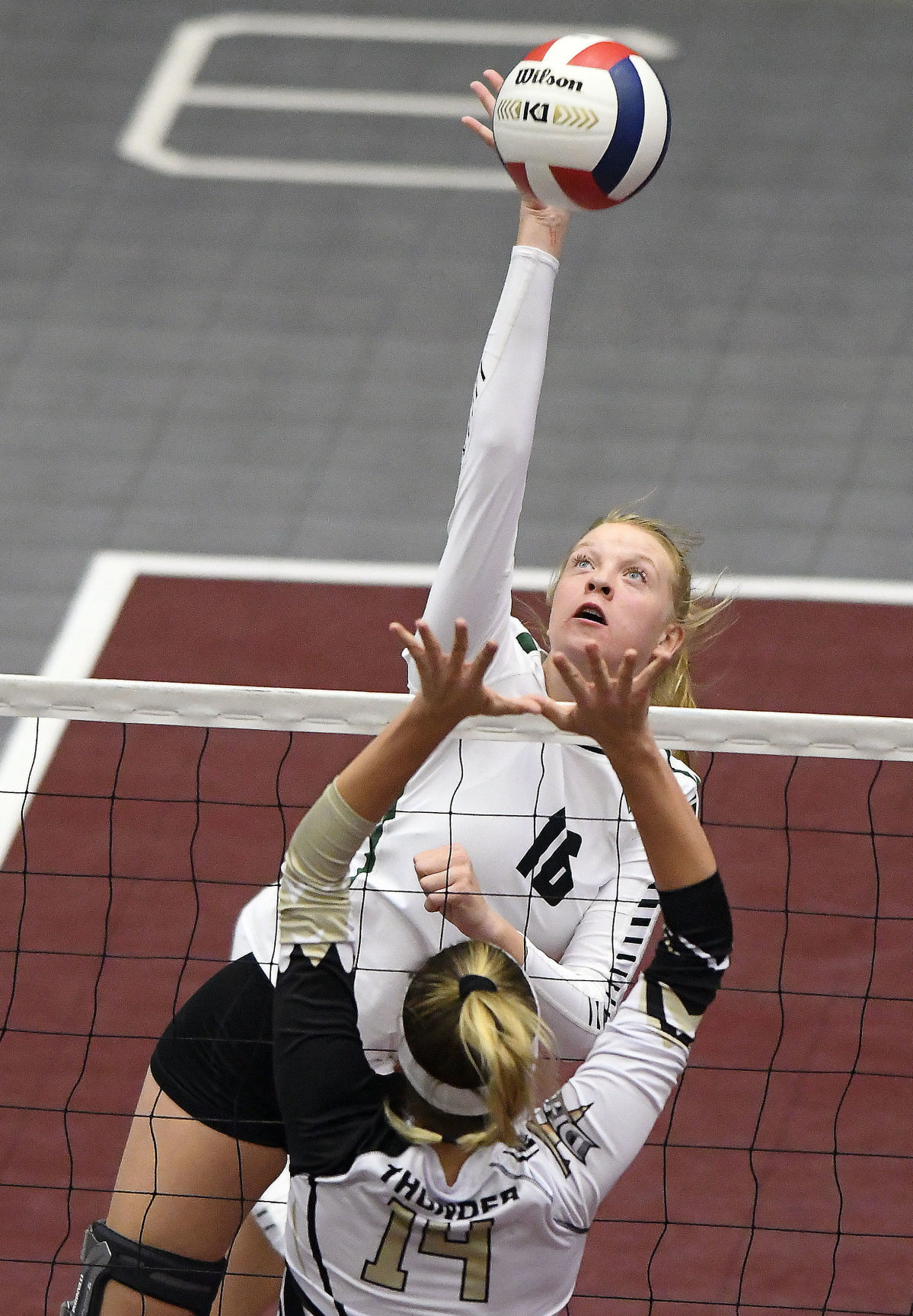 Green Canyon’s Sabree Adams hits the ball over the net against Desert Hills during the championship match of the 4A State Volleyball Tournament last October. 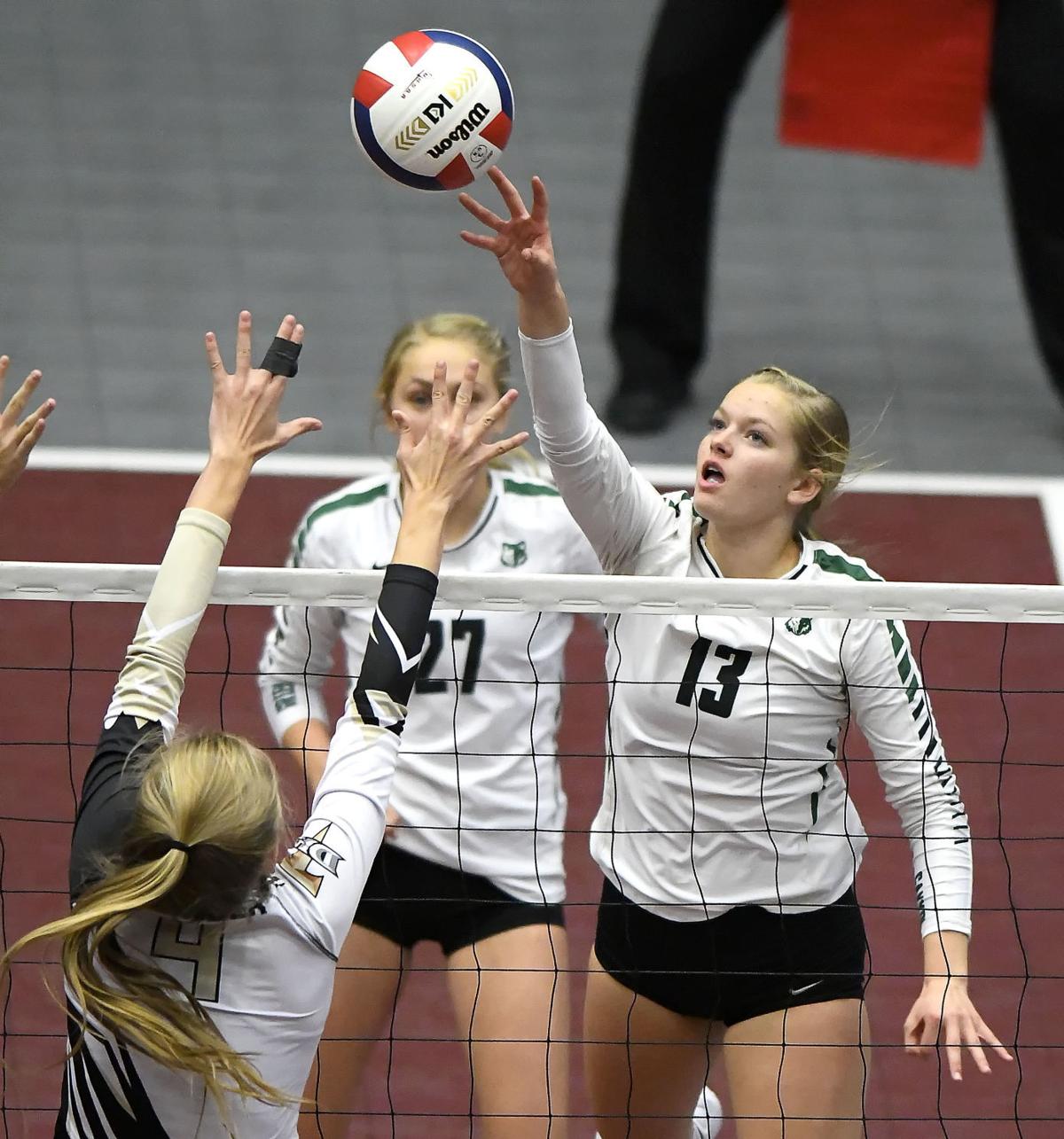 Green Canyon’s Jacie Walker (13) hits the ball over the net as Desert Hills’ Ellie Chase defends during the championship match of the 4A State Volleyball Tournament last fall.

Green Canyon’s Sabree Adams hits the ball over the net against Desert Hills during the championship match of the 4A State Volleyball Tournament last October.

Green Canyon’s Jacie Walker (13) hits the ball over the net as Desert Hills’ Ellie Chase defends during the championship match of the 4A State Volleyball Tournament last fall.

The 2019 high school volleyball season was a special one for Green Canyon, which shared the Region 12 title with Sky View and captured its first ever state championship one week later.

The emotional high for the Wolves continued to build as four of their seniors accepted the opportunity to compete at the junior college level. Shante’ Falslev, Sabree Adams and Jacie Walker have signed with Northwest (Wyoming) College, while Paige Tuckey has finalized her commitment with Dawson (Montana) Community College.

Falslev will also play basketball for the Trappers and the two-sport all-state performer was featured in a previous edition of The Herald Journal. It’s fair to say those four athletes put their stamp on Green Canyon’s program.

“It was really important to us and we’ve been playing together for a really long time, even though it wasn’t necessarily on the varsity level,” Walker said. “And so we knew each other really well ... and so we knew if we were going to do it, this was the year. And it was really exciting to be able to just go out and do it.”

Walker shined as a right side hitter and an occasional setter for the Wolves during the 2019 campaign. The North Logan native ranked second on the team in assists (117), third in kills (173) and blocks (54) and also chipped in with 103 digs and 37 aces.

The daughter of Becky and Tracy Walker played some of her best volleyball in the state tournament, where Green Canyon dispatched of Crimson Cliffs (3-1), Ridgeline (3-2), Dixie (3-1) and Desert Hills (3-1) to claim the title. No. 13 averaged an impressed 14.6 kills during the Wolves’ first three matches at state and recorded a hitting percentage of .293 or better in all three of those matches. Walker racked up 19 putaways in Green Canyon’s nailbiter of a victory over Ridgeline and contributed with 17 blocks during the tourney.

As well as Walker performed to close out her prep career, she was even more excited about how her team came together, especially after suffering a heartbreaking 3-2 setback to Sky View in the regular season finale for both teams. The Wolves won the first two sets in the match and appeared to be well on their way to claiming the region title outright.

“I was really proud of our team of how we (accomplished our goal) and how our coaches guided us to handle that adversity,” Walker said. “We talked about it for a little while and it obviously hurt, and it was frustrating and annoying, but we knew we couldn’t dwell on it because we had state in the next two weeks. ... So, it ended up being a good thing. Obviously not quite how we wanted it to go, but I was really proud of our team. I think it showed how mentally tough we were.”

Walker also sparkled in the classroom for the Wolves as she earned academic all-state honors in volleyball and basketball.

The third-team all-state selection was considering playing collegiately for a school in Texas, but couldn’t pass up the chance at being mentored by former Salt Lake Community College assistant coach Scott Keister. Keister, who recently took over the helm at Northwest College, coached Walker’s older sister Alyssa at SLCC.

“I’m excited,” said Walker, who competed for Green Canyon’s track & field program as a freshman. “I was a little hesitant at first. I didn’t know quite what I was getting into playing at the next level, but definitely with having two of my teammates it makes it so much better. I’m so excited.”

Indeed, Walker is looking forward to being reunited with Adams and Falslev. That sentiment was echoed by Adams, who garnered honorable mention all-state accolades as a middle blocker.

“I’m so excited, actually,” Adams said. “I’ve played with them ever since freshman year and so we’ve grown super close and they’re some of my best friends. And I was super excited in general, but I think that just makes it even more exciting.”

The daughter of Julie and Luke Adams was Green Canyon’s top blocker last fall, in addition to being the team’s most efficient high volume hitter (.244 attacking percentage). No. 16 paced the Wolves in blocks with 80, including 10 of the solo variety, and finished fourth on the squad in kills (131).

Like Walker and Tuckey, Adams came up big for the Wolves during their state title run. The North Logan native racked up eight kills and hit at a .333 clip in the championship match, and amassed a team-best 20 blocks at the tournament. The academic all-state selection also hit .429 in the aforementioned win against Ridgeline.

Adams competed primarily at the JV level as a junior, much like several of her class of 2020 teammates. The Wolves lost most of their premier performers from their 2018 squad, and yet were able to impressively reload in time for their historic season. Green Canyon lost its top four performers in kills from it’s ’18 squad, six of its top seven leaders in blocks and four of its top five leaders in aces.

The Wolves were able to help offset the graduation of those talented class of 2019 athletes by meshing extremely well as a team the following season.

“I think that a lot of teams always have their favorite person to set ... but we were such a (balanced) team,” Adams said. “We were like a family and I think that was super important because not every team has that, and we really cared about each other and we weren’t playing the game for ourselves, we were playing it for our teammates. And I think that makes a huge difference.”

Adams had four other offers to play at the next level, but “I just felt the most comfortable with (Northwest College).” The Trappers were the first program to extend an offer to Adams.

“At first I did not think I would play any college volleyball,” Adams said. “I had just kind of decided that I didn’t want to. (But) after we won state I realized how much I missed it, and so I just wanted to keep playing volleyball for fun. And so I was just doing some camps and I went to one at SLCC, and a bunch of coaches were there, but I wasn’t even thinking about (playing in college at the time).”

Northwest College went 5-22 last fall, but Adams is confident Keister can turn things around. SLCC racked up at least 21 wins in five of Keister’s six seasons as an assistant coach with the program.

“I think that he is going to push us a lot more than we even think he will,” Adams said. “... He seems like he has the spirit to (turn things around). I’m excited to be coached by him.”

Like Adams, Tuckey relished her time playing for the Wolves because “we were so much like a family. It was such a good family environment. We all still talk to each other, we all still visit each other.” Additionally, the Hyde Park native thoroughly enjoyed helping her senior class leave their legacy at Green Canyon.

“It meant a lot to us,” Tuckey said. “We worked super, super hard for it. We had absolutely no doubt that we were going to be able to do it, and so ... if we didn’t do it, it would have been crushing. We put a lot of time and effort into it and everybody believed in us, so we were ready to (accomplish our goals).”

The daughter of Amy and Nick Tuckey was recruited by Dawson Community College as a libero. No. 10 was a defensive specialist as a prep senior because the Wolves had what Tuckey called an “awesome” libero in Kaitlin Compton, who was a first-team all-state selection.

Tuckey contributed with 72 digs in 79 sets as a senior for the Wolves, but accumulated a season-high 10 in a pair of matches at the state tourney. She recorded 28 digs in the four postseason matches.

Tuckey was recruited by several other smaller college programs, but ultimately chose the Glendive, Montana-based school because of its “family environment.”

“It’s kind of been my dream to play in college since I was like eight, and so I’m super, super excited,” Tuckey said. “I’m a little nervous because it’s far away (an 11-hour drive), but I’m going to push past my nerves.”

The Buccaneers went 12-21 last fall, but won six of their final eight matches, including four of their last five. Dawson is coached by Dina Fritz, who is very excited about the addition of Tuckey to her program.

“I know Paige will be a great addition to our team on the defensive side of the ball,” Fritz said in a press release. “She brings great energy and positivity along with her motivation to make herself better. She works hard and I can see her having a very bright future as a Lady Buc.”

When asked if their was anything else she wanted to say, Tuckey offered some valuable advice to aspiring college athletes.

“For those of you who are looking to play in college, start as soon as you can and don’t give up because I almost gave up, and I’m really lucky that I didn’t,” she said.