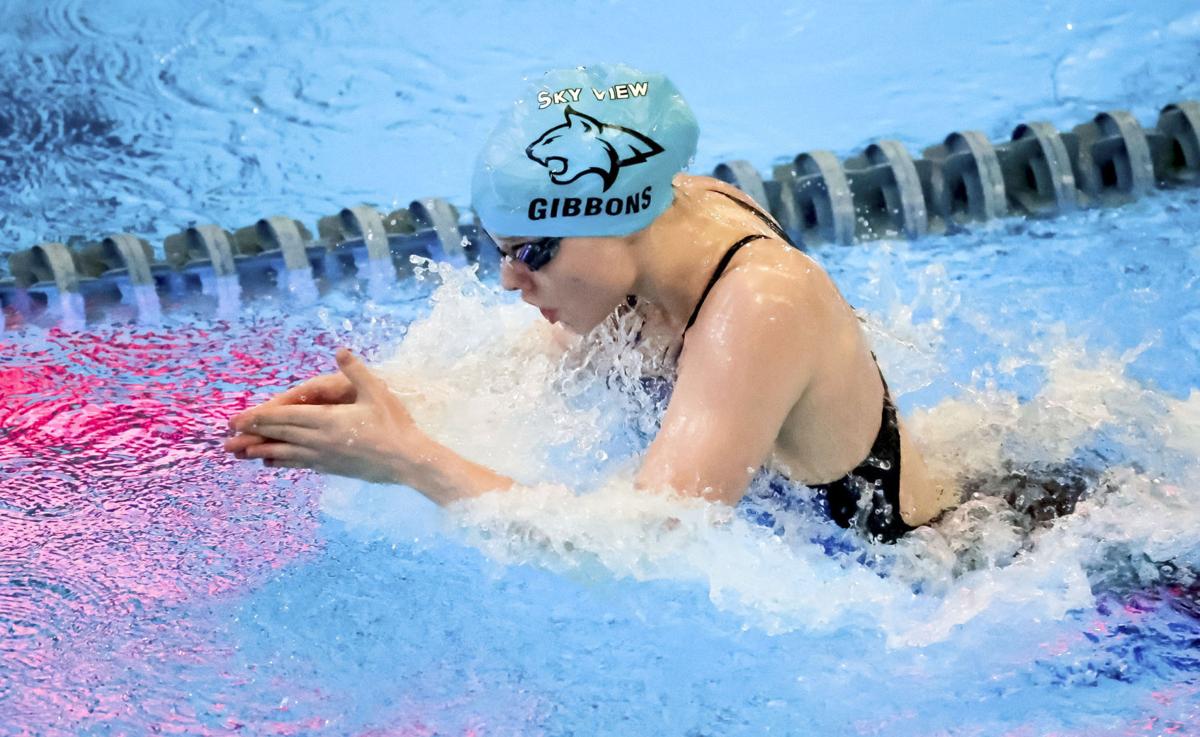 Sky View’s Jenna Gibbons swims the 100 yard breaststroke at the 4A state meet at the South Davis Recreation Center in Bountiful on Saturday. 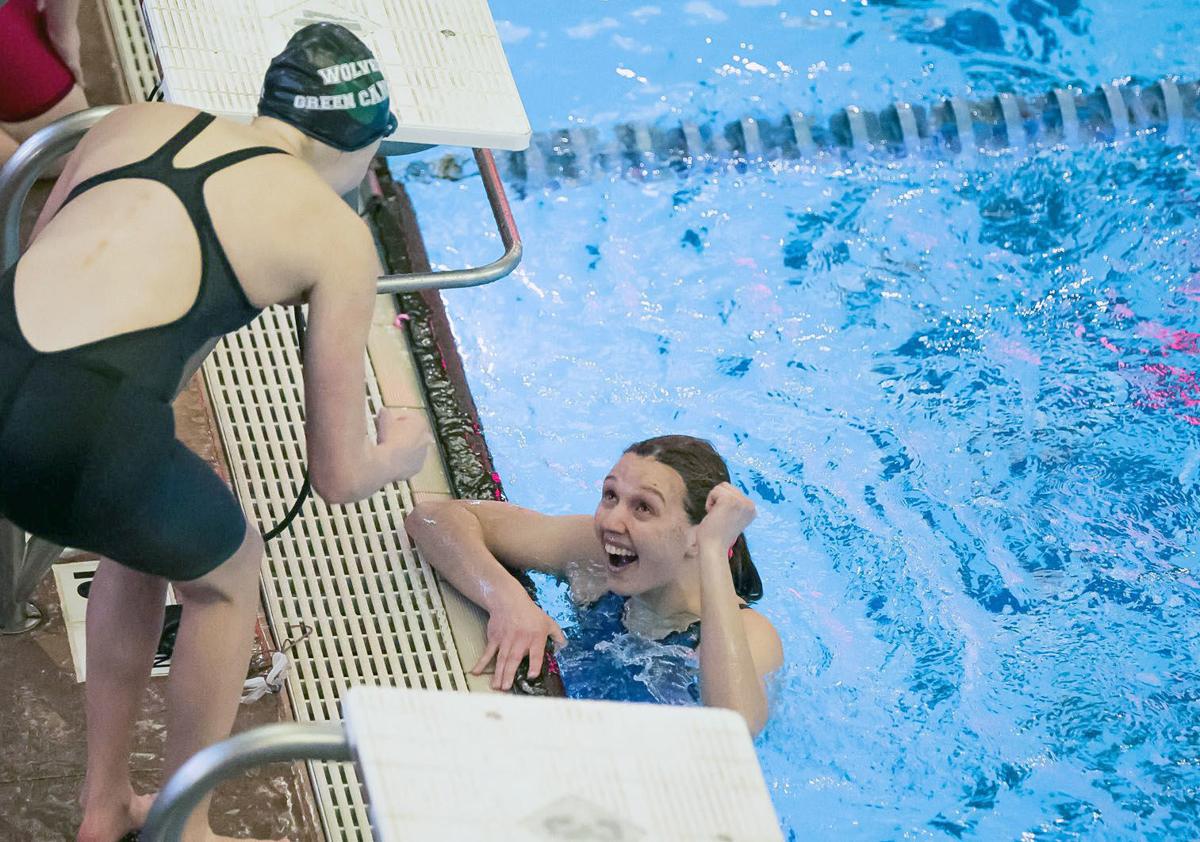 Green Canyon's Kaylee Coats (in the water) won three gold medals and a silver at the 4A State Championships last Saturday in Bountiful. 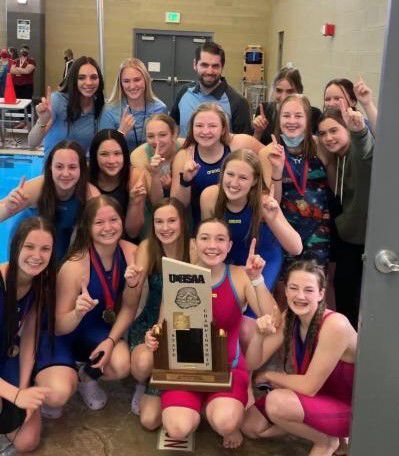 Members and coaches of the Sky View girls swimming team pose with the first-place trophy at the 4A State Championship, which concluded Saturday in Bountiful.

Sky View’s Jenna Gibbons swims the 100 yard breaststroke at the 4A state meet at the South Davis Recreation Center in Bountiful on Saturday.

Green Canyon's Kaylee Coats (in the water) won three gold medals and a silver at the 4A State Championships last Saturday in Bountiful.

Members and coaches of the Sky View girls swimming team pose with the first-place trophy at the 4A State Championship, which concluded Saturday in Bountiful.

The South Davis Recreation Center is located 72 miles from Logan, but a wealth of high school girls swimmers from Cache Valley certainly felt right at home in the Bountiful-based facility.

It was an unforgettable weekend for local female swimmers as they stole the show at the 4A State Championships, which concluded Saturday morning. For starters, Sky View and Ridgeline swept the team trophies, while Green Canyon finished fourth.

The Lady Bobcats swam away from their competition they racked up 332 points to the Riverhawks’ 262. Region 9 champion Snow Canyon was third with 253 points, followed by the Wolves with 207. Additionally, Mountain Crest finished 10th (95 points), immediately followed by Logan (69) and Bear River (51) in the 21-team field.

“The girls put in a lot of work,” said SV head coach Marcus Singleton, who has led the program to a trio of state championships and two runner-up trophies over the past six seasons. “We had a lot of depth and determination to move up in (all of the) events. I’m proud of their effort and proud to be their coach. I’m grateful for the other teams who pushed us to be the best we could be. Cache Valley was well-represented at state. The club team that Nikki Walsh and I coach in the offseason has really helped shape swimming in Cache Valley. A lot of credit goes to her and all the high school coaches for all they do. It is a great day to be a Bobcat.”

Sky View had an impressive six athletes who earned a spot on the podium in both of their individual events in Jenna Gibbons, Allison Dean, Allie Schwartz, Sarah Olsen, Lauren Bassett and Ellie Legler, plus Keira Mannewitz was oh so close. Gibbons led the charge as she defended her state title in the 100-yard breaststroke with a blistering time of 1 minute, 5.54 seconds, and was the silver medalist in the 100 butterfly (1:02.47). The senior also helped the Bobcats capture bronze medals in the 200 medley and 400 freestyle relays.

Gibbons, an outside hitter on Sky View’s state championship volleyball team, was joined on the medley and 4x100 free relay squads by Dean and Schwartz. Bassett swam a leg on the 4x100 foursome, while Olsen competed on the medley relay team.

“It is so incredible to be able to win both (state) titles my last year of (high school) sports,” said Gibbons, who missed out on the school record in the breaststroke by .08. “Both of my coaches did an amazing job getting us to this point and to have both of the sports I love end this way is truly something special. I have loved competing against the teams this year with my teammates, and taking home two first places in one year is surreal.”

The most successful local athlete at the meet — and they were several worthy candidates —was Green Canyon’s Kaylee Coats, who left Davis County with three gold medals and one silver. The junior got off to an outstanding start as she anchored the medley relay squad to an epic come-from-behind victory.

“It was a huge gap and we worked so hard to get there, so yes I believed I could get it,” Coats said when asked if it was a deficit she felt she could overcome.

Coats also reigned supreme in the 500 free (5:28.11), anchored the 200 free relay squad to a title and was the runner-up in the 200 free (2:01.57). Coats, who was joined on both victorious relay teams by Rylie Corry, Mia Huebner and Abbey Erickson, only had about eight minutes of rest time between her first and second races.

“The most tiring thing was definitely going from the medley relay to the 200 free,” Coats said. “My excitement from the 500 free really carried over to the free relay, though. I had so much adrenaline.”

In addition to Coats and Gibbons, it’s been a remarkable season for Ridgeline’s Carly Eubanks, who claimed four silver medals at the two-day meet. The junior powered her way to the No. 2 spot on the podium in the 50 free (24.96) and 100 free (54.26), and anchored the 200 and 400 free relay teams to second place. The standout soccer player lowered her own school records in her two individual races, to boot.

Eubanks teamed up with Hailey Rigby and Madi Cook in both relays, plus Sarah McNeil in the shorter relay and Navie Powell in the 4x100.

“I’m very happy I dropped time in the 50 and the 100,” Eubanks said. “It wasn’t necessarily where I wanted my times to be, but when I think of how tough of a season it was and how different state was (this year), I realize that I should be proud of myself for being able to shave off any time at all.”

Rigby shined in her final high school meet as she garnered four medals. The senior, who made point to thank her teammates and coaches for helping her achieve her goals, was the runner-up in the 200 IM (2:17.32) and posted the third-fastest time in the 100 fly (1:03.26).

“It was really nice,” Rigby said of peaking at the end of her senior year. “I think it was kind of hard because the whole season I was not doing what I wanted to be doing, I wasn’t getting my (normal) times and it was really frustrating because you want to get back to those times you were getting. ... Coming into state, I knew that I was going to have to work extra hard and put in the hours ... and coming to state and accomplishing those goals, it felt so incredible.”

Another local competitor was earned a silver medal in an individual event was Legler, who clocked in at 5:32 in the 500 free, which is a personal record. Legler also placed sixth in the 200 free (2:06.26).

“Well, the taper probably helped,” Legler said when asked why she was able to peak at state. “I’ve been slowly getting back to peak shape over the season after the COVID shutdown and the two-week break at the beginning. So it was probably that and then just getting the feel for the 500 again and for racing. ... And Marcus has been good at helping me fix the little technicalities in my stroke, and that definitely helped a ton.”

“It was so rewarding to see all of the hard work and dedication I have put in for the past 11 years to be shown today,” Dean said of making the podium in all of her events. “I am extremely grateful that I was able to have such a great last high school meet and end this season in the absolute best way possible.”

“It’s always really fun to race against everyone at that level when we’re all at our peak,” Huebner said. “Being able to podium was just so exciting.”

Green Canyon’s Erickson was the B division champion in the 100 free (59.22) and she recorded the sixth-fastest time of the day.

Ivy Warde finished seventh in the 100 back (1:05.50) for Mountain Crest, which got B division titles from Kennedy Child in the 200 IM (2:28.12) and Emilee Leishman in the 500 free (5:50). Those swimmers with the eight fastest times from Friday’s preliminary heats advanced to the A finals, with the next eight fastest competitors making it to the B finals.