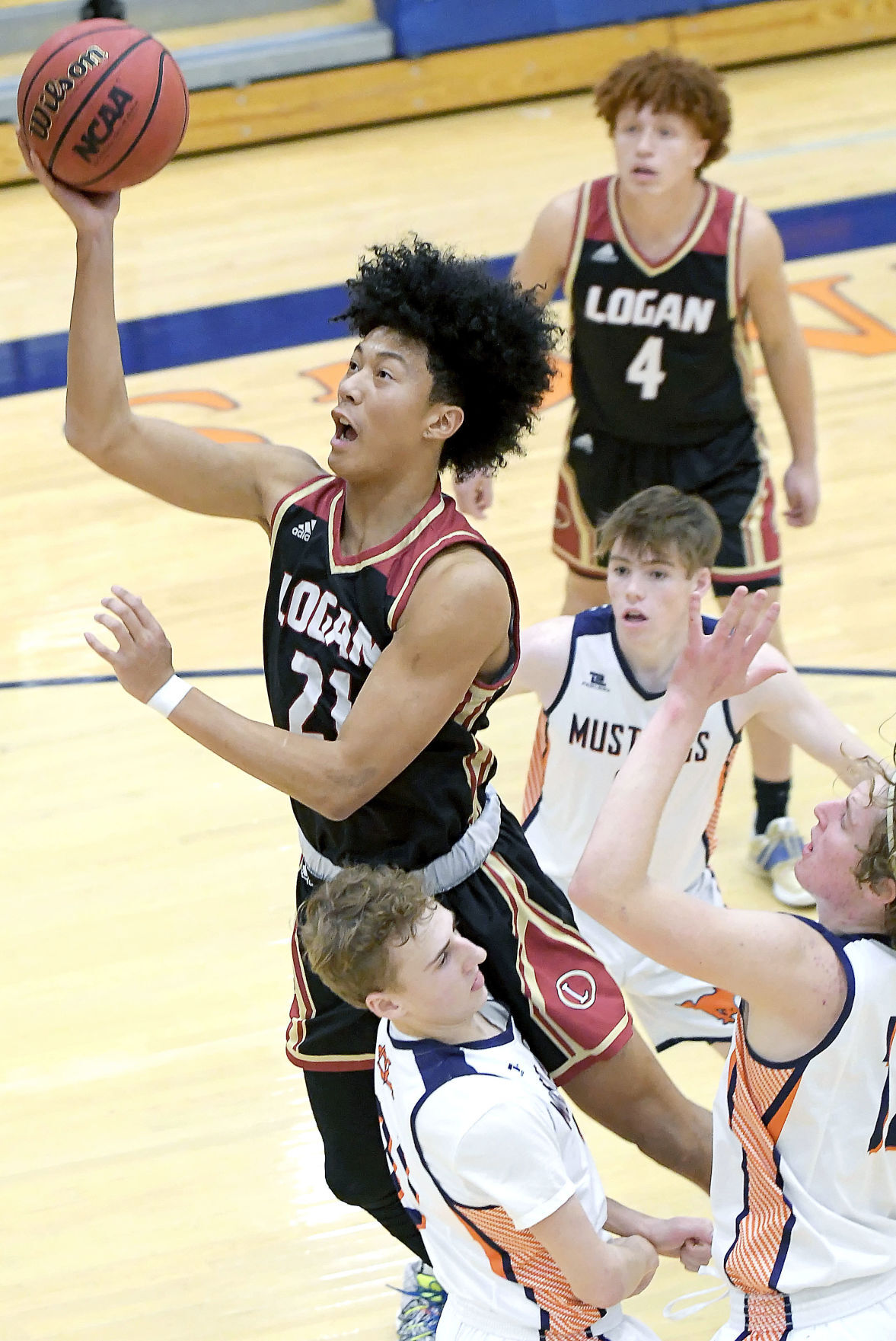 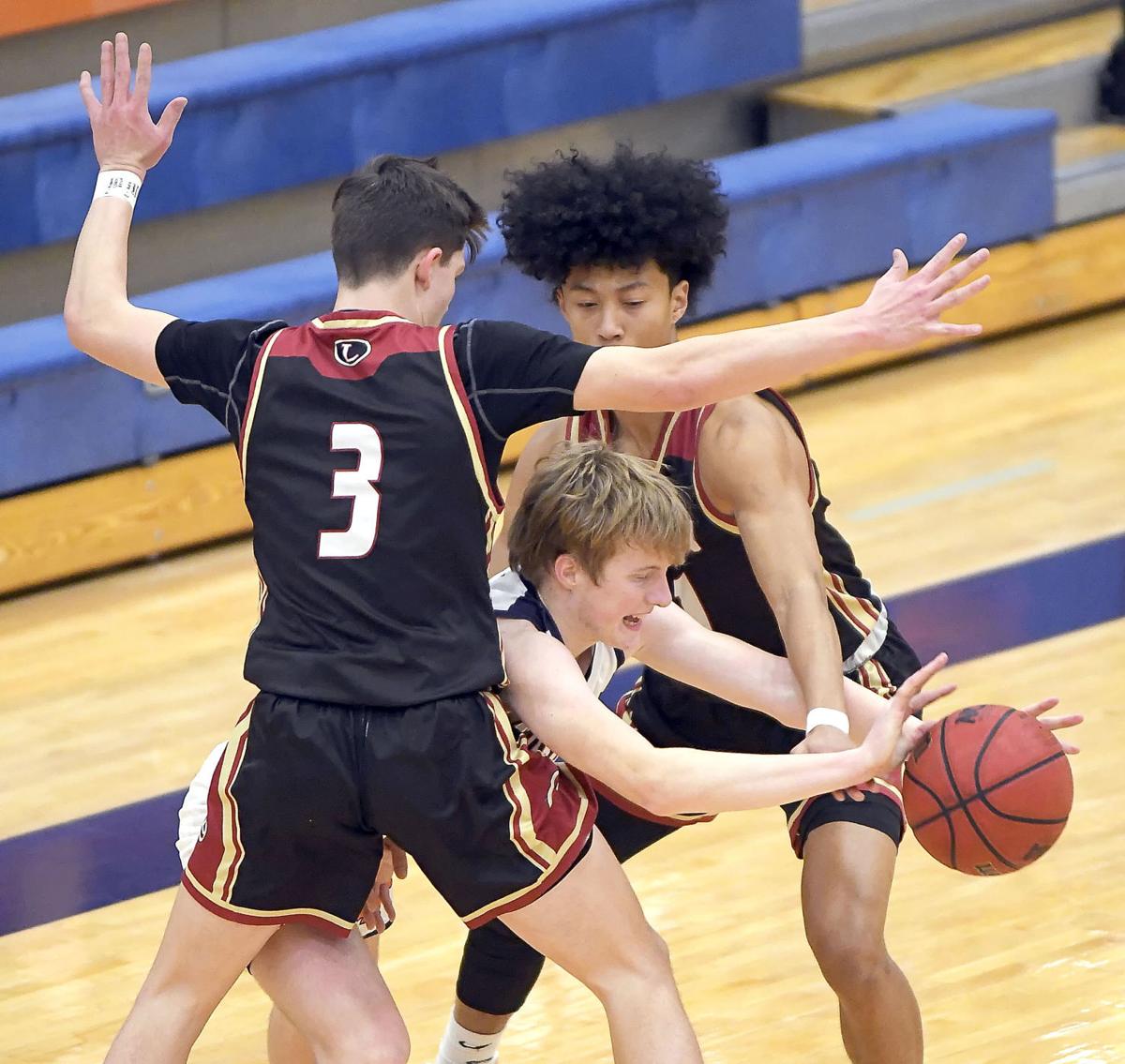 HYRUM — It was over pretty quick Friday night.

Logan came out firing darts from beyond the 3-point line, and Mountain Crest had way too many turnovers in the early going. The Grizzlies led from start to finish in a Region 11 boys basketball game, cruising to a 76-44 victory over the Mustangs.

“We wanted to get a good start; it was all in the game plan,” said Logan’s Jadin Penigar, who finished with a game-best 19 points despite being in foul trouble most of the first half. “We executed very well.”

With the win, the Grizzlies (12-4, 4-2 region) have a firm grip on third place. Logan has won three of its last four outings. Most importantly, the Grizzlies bounced back after a disappointing loss to Ridgeline last week.

“Collectively as a team, I thought we shared the ball, reversed it, got a lot of really good looks,” Logan head coach Logan Brown said. “I thought our guys responded well this week. It starts in practice. We did a really good job this week of getting better. I’m proud of my guys. I thought they did a great job.”

Mountain Crest (2-14, 0-6) has now lost nine in a row. The Mustangs were much more competitive in the first game against the Grizzlies before losing 62-41. Friday night was certainly not one to remember for the Mustangs.

“It was an onslaught from the beginning,” MC head coach Kevin Andersen said. “They had a lot of kids step up and hit threes. Hand it to them; they were on fire.”

Logan’s first five buckets were from beyond the arc. The Grizzlies went on to make 16 3-pointers for the game. Penigar had five of them as seven different players made at least one from long range.

“I just came out and tried to contribute and do what the team needed me to do,” Penigar said.

The visitors also shared the ball Friday night. Of the 26 made field goals by Logan, 21 came via an assist.

“It starts with our ball movement,” Brown said of the 3-pointers. “We really got the defense shifting. We attacked open lanes and kicked to our shooters. Our ball reversal was really good. When you do that, you are going to have a higher chance of making shots.”

“It’s fun seeing all of our hard work pay off,” Penigar said. “There is nothing better on a Friday night.”

Jaelin Hoth and Penigar led on the boards with four each. Hoth had a game-high five assists, while Oliver Hashimoto had four dimes.

The Mustangs were led by Preston Wiberg and Miles Croshaw with 11 points each. Garrett Austin added eight points. Croshaw and Joseph Hunsaker each corralled five rebounds.

“It got away from us early,” Andersen said. “We had some kids play hard in the second half. But when you are down that much at half, it’s hard to fight back and make a game of it.”

It took Logan just 11 seconds to start the 3-point barrage. Penigar took a pass from Tuft and drilled a 3-pointer. After a Mustang turnover, Hashimoto found Jenson open for 3. Penigar came up with a steal and pulled up for another trey to give the visitors a 9-1 lead just 76 seconds into the contest.

“We play together as a team and find each other,” Penigar said.

“I thought our energy was right where it should be at the beginning of the game,” Brown said. “Defensively, we were getting after it and limiting them to one shot.”

Penigar picked up two quick fouls and sat. Jenson ended up with eight points in the opening quarter as Logan took a 19-7 lead. Mountain Crest had seven turnovers in the first quarter.

“We had too many turnovers at the start,” Andersen said. “They made us pay for it with those threes off our turnovers. We just never recovered.”

But the worst was to come for the hosts, despite opening the second quarter with a bucket from Oliver Nethercott.

Penigar drilled his third trey to spark a 17-0 run by the Grizzlies as the Mustangs had four straight turnovers. Penigar picked up his third foul and sat, but Davis took over as he had seven points during the surge. Jaylen Sargent scored off a Hoth pass to cap the run and make it 36-9 at the 3:15 mark of the second.

The Grizzlies outscored the Mustangs in every quarter.

Penigar had another early 3-pointer in the third and ended up with eight points in the third. Logan took a 59-30 lead into the fourth.

Eight straight points by Jensen gave the Grizzlies their largest lead of the game, 70-36, with 4:21 to play. Logan went deep on the bench the rest of the way.

“This has been one of the funnest teams I’ve ever coached as far as how connected they are,” Brown said. “They really like playing for each other. There are no agendas. They are a fun group, and I’m going to enjoy every day I have with them.”