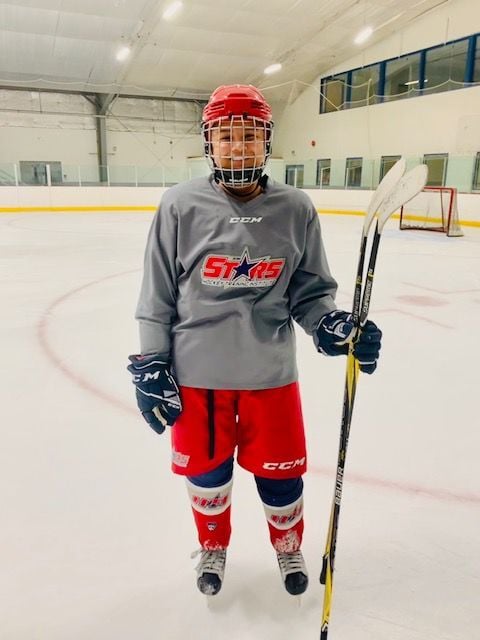 Logan’s Victoria Khou is currently playing for a prestigious hockey program in Canada. The 15-year-old aspires to play Division I hockey and for the U.S. National Team. 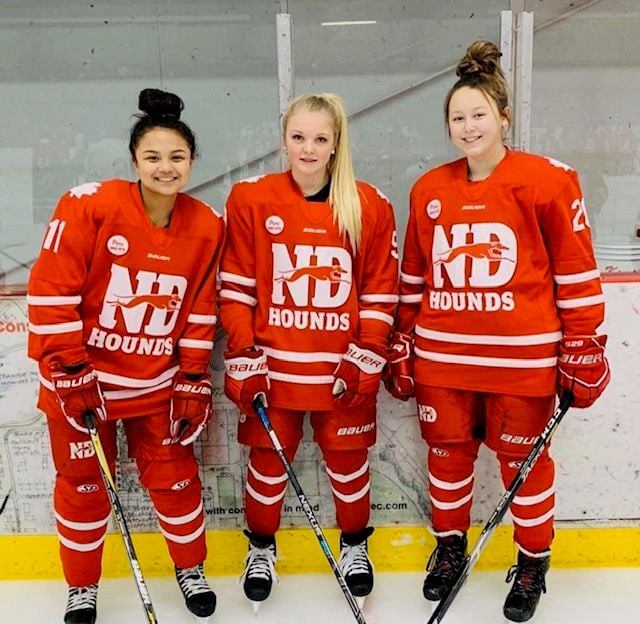 Logan's Victoria Zhou, far left, is currently playing for a prestigious hockey program in Canada. The 15-year-old aspires to play Division I hockey and for the U.S. National Team.

Logan’s Victoria Khou is currently playing for a prestigious hockey program in Canada. The 15-year-old aspires to play Division I hockey and for the U.S. National Team.

Logan's Victoria Zhou, far left, is currently playing for a prestigious hockey program in Canada. The 15-year-old aspires to play Division I hockey and for the U.S. National Team.

This year has been a bit of a whirlwind for Victoria Khou thanks to COVID-19, but it’s also been a memorable one.

That’s because the longtime Logan resident has earned the opportunity to play with some of the best hockey players in the world in her age group. The 15-year-old was accepted into the Hockey Training Institute (HTI) Stars program in Ontario, Canada, for the 2020-21 academic year.

Khou left for Barrie, Ontario, the day before Thanksgiving and, after a mandatory two-week quarantine by herself, joined her teammates — most of whom are from Europe or Canada. This is the second straight year Khou has spent time attending school and playing hockey in Canada. As a ninth-grader, she attended Athol Murray College of Notre Dame, a boarding school in Saskatchewan.

“It means a lot because they play exhibition games against D-I teams, so this is a really good way to get on the radar (of these teams), and they have a lot of commits to Yale and other D-I teams,” Khou said. “And so it means so much and this opportunity is amazing.”

Khou is the only player from Utah on the roster of her HTI team. This is nothing new for the sophomore, who has been breaking ground in her sport for several years now.

For starters, Khou was the first-ever female player to compete for the West Coast Renegades, a prestigious club team based out of West Valley City. Khou played on a U14 team a couple of years ago.

“Victoria was certainly a player who attracted attention at our tryouts. She never shies away from the physical part of the game and is always looking to play the body,” the club said in a release in October of 2018. “Coach Metcalf said after watching Victoria play, it was evident she could skate with the boys. She never backed down and always played with a tenacious effort.”

One year later, Khou was the only female player from the Beehive State to get invited to the renowned STX 68 camp, which was held in Illinois in August of 2019.

“The STX 68 is by invitation only, so the fact that you have been invited means that you are regarded among the best female players in the country at the 2005 birth year,” the organization wrote in a letter to Khou in May of 2019.

Khou has spent extensive time competing with and against boys, including a portion of the 2020 season for the Sky Canyon Predators while she was waiting for her international student visa to come through. Sky Canyon, which is comprised of players from Sky View and Green Canyon, capped off an undefeated season last winter with a club state championship.

“It’s helped me with the workouts and just learning how to be a better teammate because a lot of my teammates are really good, so I’ve learned off of them,” Khou said when asked about how playing with the boys helped her improve as an athlete. “... Our (Sky Canyon) captains are really good.”

Indeed, Khou has done everything in her power to develop into the player she is today. A lot of that credit goes to her father, Jay Obmerga, who was an accomplished youth player in his own right. Obmerga went on to play club hockey at Utah State.

“I would not be as good as I am today without him,” Khou said. “He basically made me the player I am right now. He’s done a lot for me.”

In fact, Obmerga was instrumental in Khou receiving the chance to play in Canada.

“My dad used to play with the (HTI Stars) coach when they were teenagers, and then they just kind of started talking a couple of years ago, and I started going to their prospects camps,” Khou said. “And then we started talking this year because this is the year I can commit to college teams.”

Playing Division I hockey is one of Khou’s primary goals. The native of Illinois also aspires to play for the U.S. Olympic team and ultimately win a gold medal at the Olympics.

It’s that kind of competitive nature that has allowed Khou to excel in the sport she loves.

“I just love skating and I love scoring,” said Khou, who first started playing when she was 6 years old. “I love winning too. It’s just everything about the game, I just love it. When I’m angry, it helps me de-stress. It’s an aggressive sport, you know, and that helps (de-stress).”

Helping her team win is something the defenseman takes a great deal of pride in.

“I would say my skating’s pretty good and I just get to work and I work really hard, I feel like, because I just want to win so bad,” Khou said.

What are some of the things Khou feels she needs to shore up to take the next step as a player?

“I think I should improve on not stressing, not being so stressed with our games because I know there will be colleges watching,” she said. “And then also my shot needs to be faster.”

Khou received emails from some D-I programs when she was 13, but then the NCAA passed a rule stipulating teams can’t talk to prospective recruits until end of their sophomore year. That time has nearly arrived for Khou, who is honored to represent the Beehive State and Cache Valley during her time in Canada.

“I’m super excited and just ready to get to work when I get there,” she said.