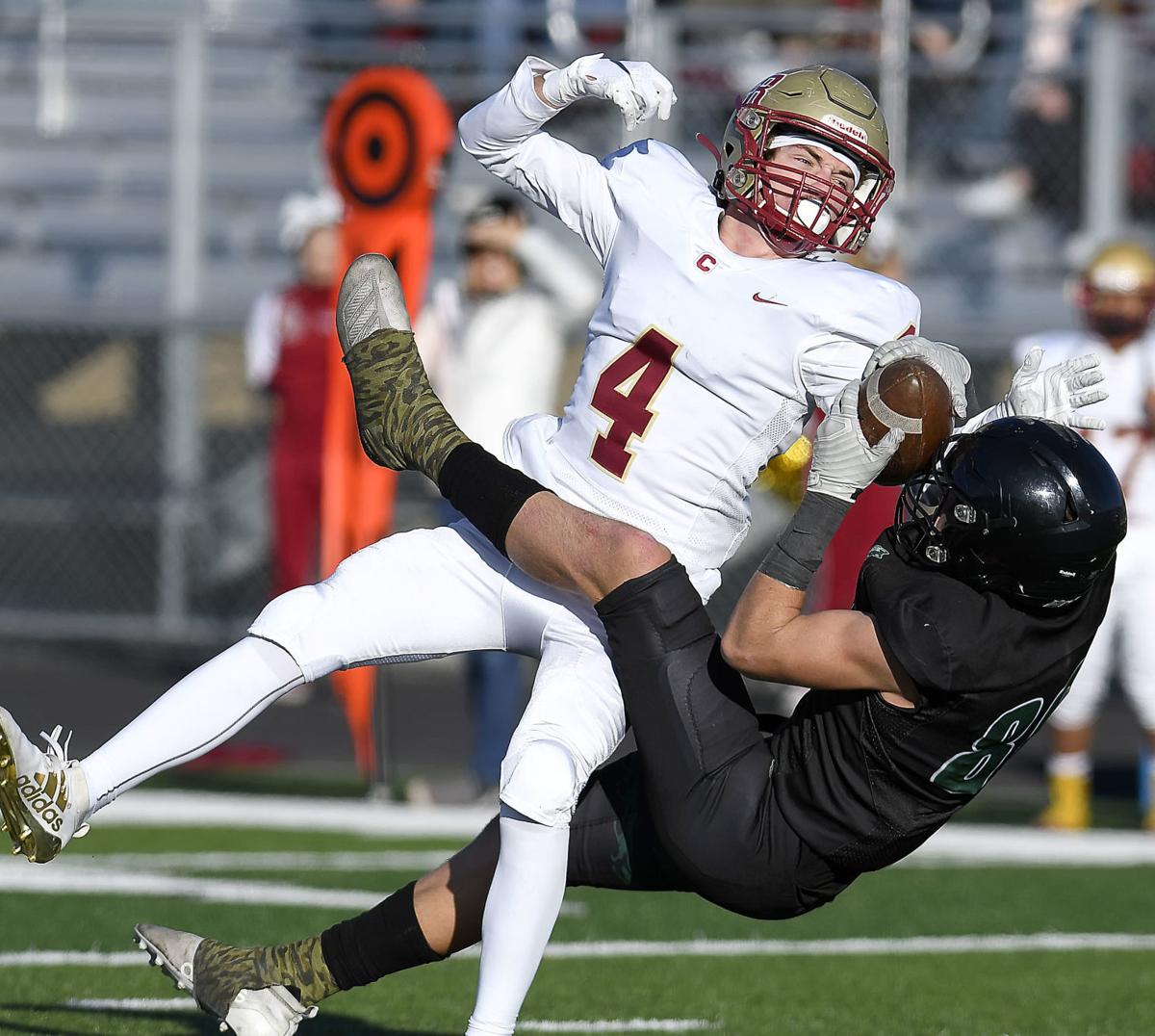 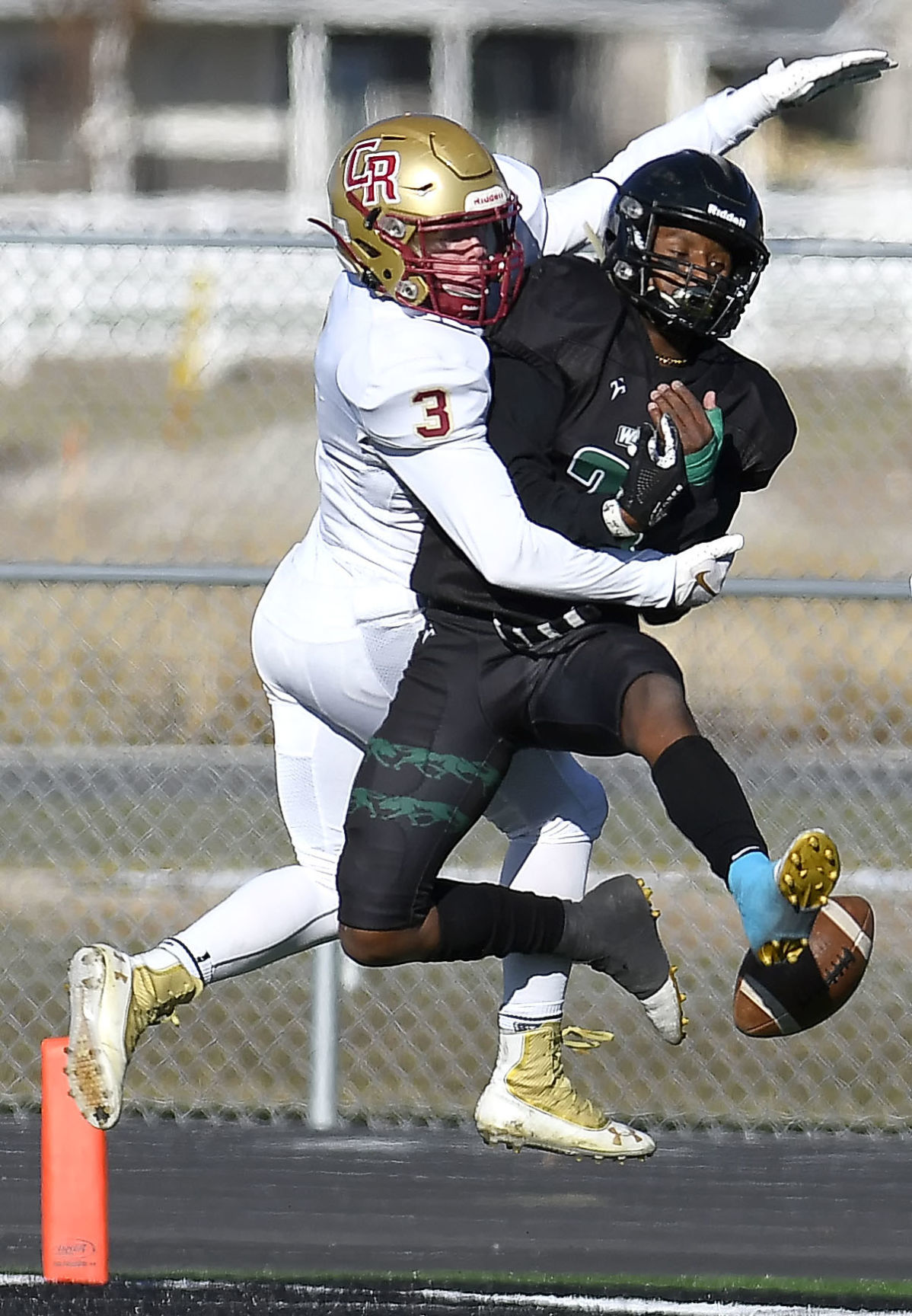 NORTH LOGAN — Despite an intense comeback bid by Cedar in the fourth quarter, Green Canyon held on for a 28-21 victory for its first-ever playoff win as a football program.

Wolves head coach Craig Anhder, who has been with the school since it was created three years ago said “it’s sweet” to finally get the first postseason win in what was also the first-ever home playoff game.

“For the past few years it’s been like a buildup year,” Wolves junior defensive back Carter Compton said. “We really had confidence in ourselves this year to come out in the third year and prove to the valley that we’re not the new, pretty school and show people we can play football.”

With 4:05 left in the game, junior quarterback Jake Lundin converted a 1-yard QB sneak for his second rushing TD of the day to put Green Canyon up 28-14. That play capped off a 10-play, 67-yard drive coming in response to a 50-yard touchdown connection between Cedar QB Jaron Garrett and Jack Cook. The Reds’ long TD was the team’s first score since the 8:42 mark in the second quarter.

Even down a pair of scores with just over four minutes left, Cedar refused to lay down. Garrett, with his offense starting on the 40-yard line, led his team down the field for a touchdown, but got a bit of help from some friendly flags.

The first, and most impactful, came on a deep pass inside the 5-yard line. On the play, Wolves defensive back Gage Norton pulled down the ball for an interception and ran it back 97 yards for a TD, but a flag was thrown for defensive pass interference. The flag not only negated six GC points, but it bailed out the Reds on a fourth down conversion. Five plays later the Wolves were tagged with another interference call, setting Cedar up a 3-yard touchdown pass from Garrett with 40 seconds to play.

Green Canyon had a chance to effectively end the game by recovering the ensuing onside kick by the Reds, but the ball bounced off the hands and chest of tight end Kyle Baker and was recovered by Cedar with 42 yards between the Reds and the tying touchdown.

With the recovery of the onside kick, Cedar had all the momentum. The offense had scored on each of its last two possessions, making just enough plays through the passing game to stay within striking distance. That put an enormous load of pressure on the shoulders of the Wolves defense that was only a couple plays removed from multiple frustrating flags many on the team felt weren’t justified, remnants of the past GC would have to put behind them to hold on for a win.

“Obviously you can’t change what the refs call,” Compton said, “so you’ve just got to use that emotion and go to the next play and just try to make a play and make a difference.”

Green Canyon’s defense certainly made plays and made a difference. The Reds were only able to net three yards on the game-deciding drive. Garrett went 1-for-4 passing on the drive. His Hail Mary with no time on the clock barely reached inside the 10-yard line, and for good measure the ball was intercepted by Compton.

“I knew they were going to throw it deep,” Compton said of the play, which was his second interception on the day, “so I just tried to stay back, I saw the ball go up and I just jumped up and made a play on the ball.”

The game wound up being far from pretty despite plenty of good play on both sides of the ball. Green Canyon didn’t punt all game, gaining 22 first downs but also turned the ball over twice on a pair of interceptions by Lundin. Kicker Ethan Delisle also missed a 32-yard field goal in the third quarter. Anhder said there are “things we’ve got to clean up and get better at,” but more importantly, as a he said to the boys in his postgame Green Canyon will be playing football next Friday.

While the defense had to save the day on the final play, the offense trucked along the entire game with admirable consistency. Green Canyon scored in each quarter and never truly struggled to move the ball down the field as reflected by the lack of punts from the Wolves on the night.

“That’s something we want to do and do consistently,” Anhder said regarding never having to punt in the game.

Lundin accounted for a large portion of the yards, completing 15 of 17 passes for 203 yards and a touchdown. The junior added 46 yards on the ground with a pair of scores but did fumble the ball once — recovered by himself though — with the two picks. Several receivers made spectacular grabs for big gains. Baker made multiple tough grabs in traffic, including a 28-yard reception on fourth-and-six that set up the Wolves’ second touchdown. Jacob Regan had a 33-yard gain through the air, and McKay Yorgason made his presence felt with six catches for a team-leading 88 yards.

Green Canyon will host another playoff game next week. Pine View, who downed Bear River 49-7, will travel to North Logan to face the Wolves next Friday.