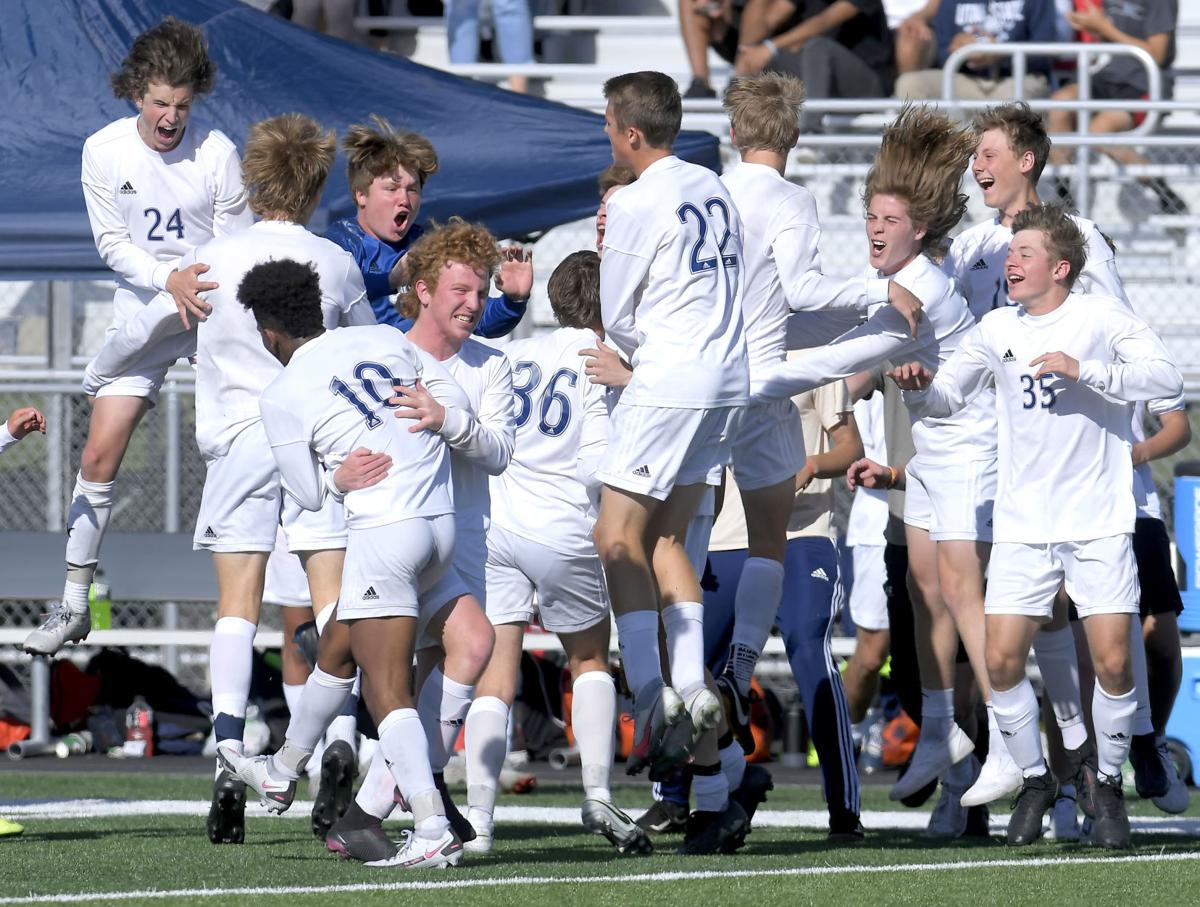 Mountain Crest players celebrate after defeating Green Canyon 1-0 in a 4A state quarterfinal game on Wednesday in North Logan. 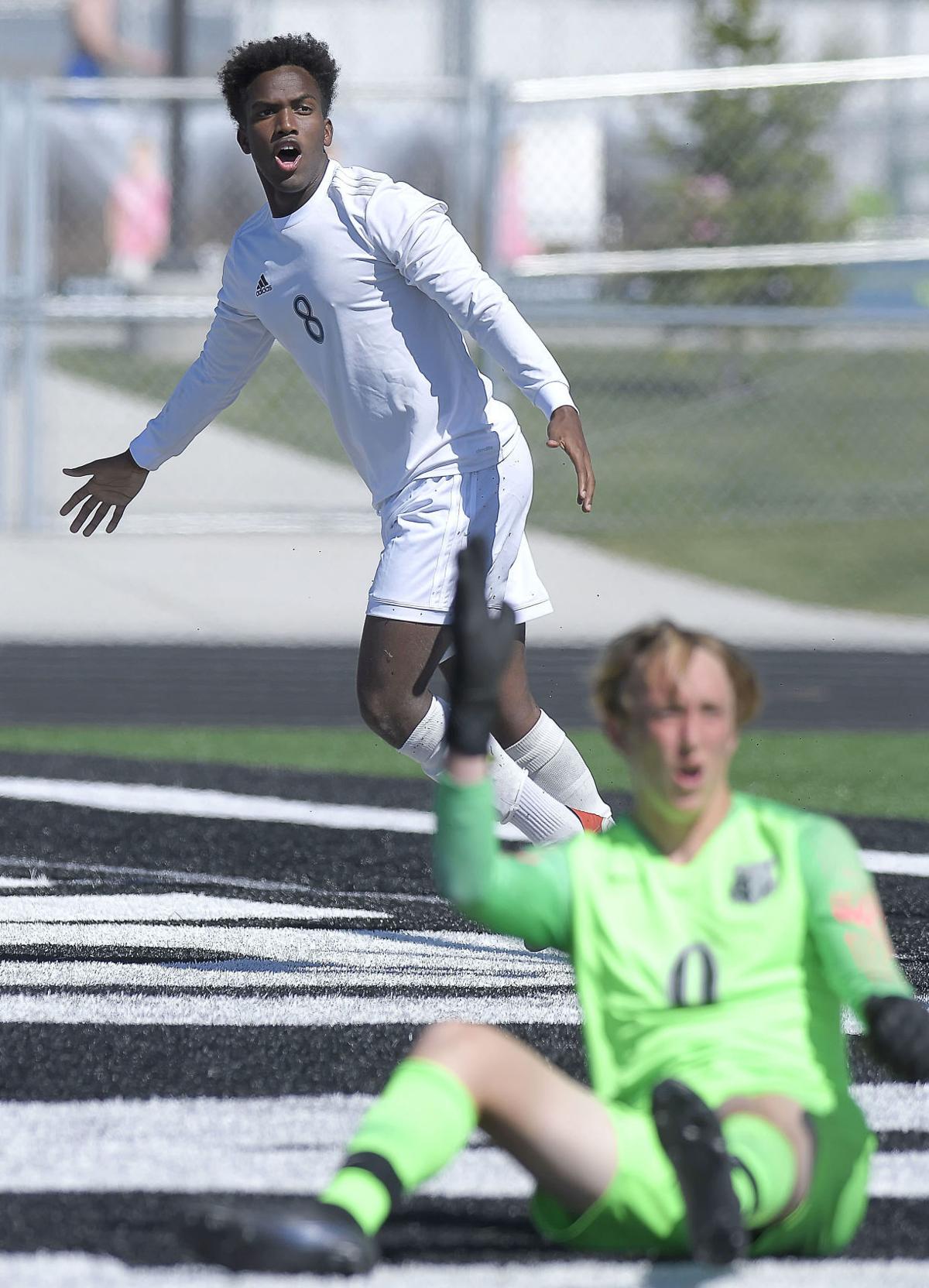 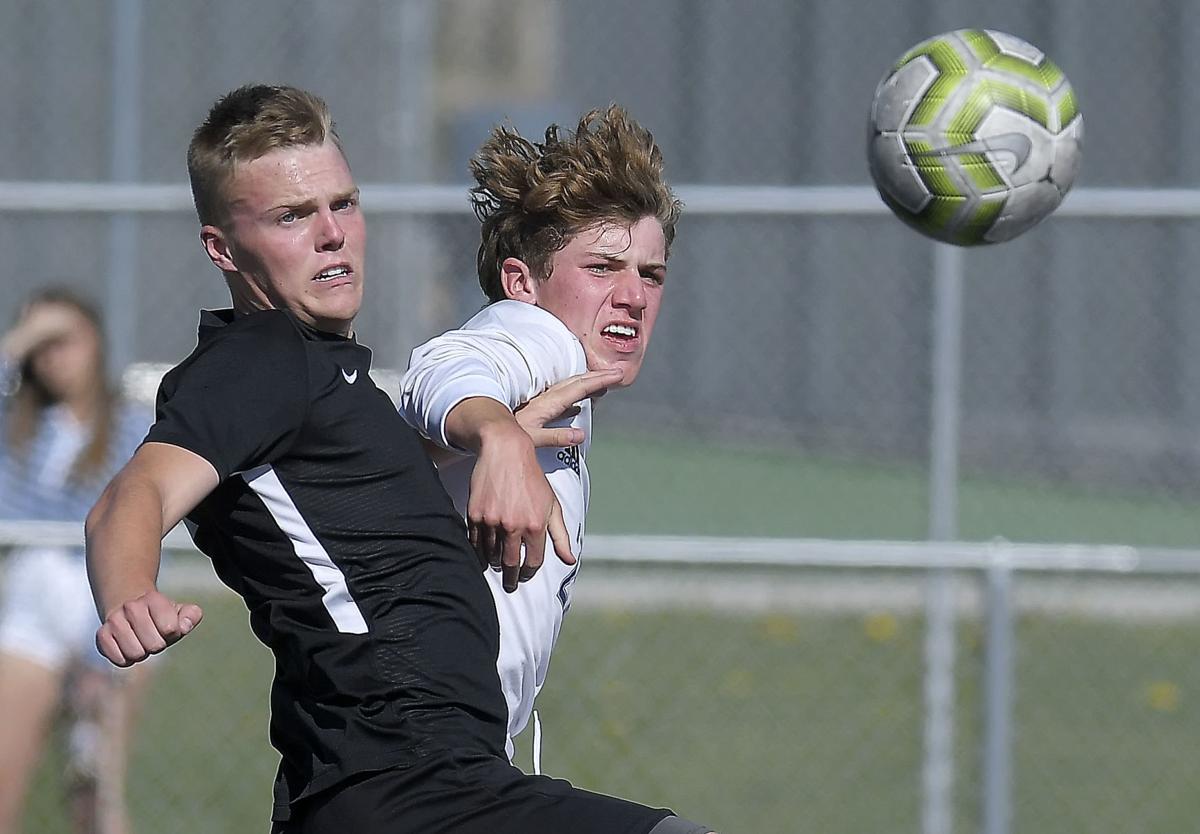 Mountain Crest players celebrate after defeating Green Canyon 1-0 in a 4A state quarterfinal game on Wednesday in North Logan.

NORTH LOGAN — There’s no doubt the Mustangs showed some resolve in their 5-4 double overtime victory over Desert Hills last Wednesday, but they were also a bit disappointed after allowing their 3-0 lead to evaporate.

It’s fair to say Mountain Crest was very determined to clean things up defensively in its next match, and that’s exactly what the Mustangs did.

Gabe Newman converted on a perfect pass from Eli Clark at the back post in the ninth minute, and Mountain Crest pieced together arguably its best defensive performance of the season in its 1-0 victory over Green Canyon in the quarterfinals of the 4A Boys Soccer Championships on a warm Wednesday afternoon.

“We were super motivated coming into (this game) and we knew what we had to do,” MC standout center back Zane Allen said. “We knew we needed to mark up wide and not let those inside runs through, and we just stayed together as a team and didn’t let anything past us. So it was a good overall team win.”

Isaac Britt was rock solid in goal for the seventh-seeded Mustangs, who earned their third clean sheet of the season and became the only Region 11 team to shut out second-seeded Green Canyon this spring. In the process, Mountain Crest (12-6) also improved to 2-1 against Green Canyon (14-4) during the 2021 campaign.

“(Our guys) played great defense today,” said MC head coach Justin Beus, who felt this was his side’s best defensive effort this season. “That was our goal going into today was to minimize our defensive mistakes because every game we’ve lost, we’ve played a part in our own loses.”

Conversely, it was a heartbreaking afternoon for the Wolves, who were crisp in possession for large stretches of the match and were able to fire off 20 shots. Unfortunately for Green Canyon, it failed to frame a handful of dangerous chances and struck a couple of prime opportunities inside the 18-yard box right to Britt.

Additionally, the one time the Wolves had Britt beat — a header by Michael Bingham that was destined for the back of the net — Mustang defender Preston Wiberg was well positioned at the back post to head it out of danger. Mountain Crest’s Ray Robbins also made a huge defensive play on a shot by Angel Torres late in the second half.

“I think that’s maybe what stings the most is we were so close, right? Because we did all of these good things and then the finishing touch just wasn’t there today,” GC head coach Sven Rasmussen said. “But, you know, some days are like that.”

There was one sequence in the second half where Green Canyon’s Porter Cragun went down in the box, and Rasmussen was hopeful the center referee would point to the penalty spot, but it wasn’t awarded.

“I think the refs actually did a really good job as a whole,” Rasmussen said.

Green Canyon got off to a strong start and had two good chances to dent the scoreboard before the fifth minute. The Mustangs withstood the early surge and netted what turned out to be the game-winner a few minutes later. Newman’s initial shot was turned aside by Green Canyon goalkeeper Ryan Scott, but the rebound went to Clark, whose pass to feet at the back post was finished by Newman from point-blank range.

“We’ve struggled to score inside the 6 (yard box) all season,” Beus said. “I mean, we’ve had so many missed opportunities, so I felt good to actually finish one. It was a great goal.”

Midway through the opening half, a laser by Green Canyon’s Ethan Cox from outside the 18 caromed off the post. To his credit, Britt got a slight deflection on the shot.

Mountain Crest fired off three shots in a 15-second stretch later in the half — the final of which was deflected for a Mustang corner. Gideon Newman forced Scott into an athletic save on a strike from at least 30 yards out early in the second half.

Some superb combination play from Green Canyon’s John Whitby and Jace Blotter set the stage for Ben Taylor with less than nine minutes remaining in the match, but the freshman’s 12-yard shot went right to Britt. Indeed, it was that kind of day for the Region 11 co-champions.

“Our seniors are freaking amazing,” Rasmussen said. “I’ll be honest, I got really close with this group and it stings and, you know, your heart aches for them. (But) even they can learn lessons from this.”

Up next for Mountain Crest is a semifinal showdown against Ridgeline. The two rivals split during the regular season and the rubber match will take place Monday at 7:30 p.m. at Jordan High School.

“It feels amazing,” Allen said. “I mean, we have a great region. It feels good to beat a team from our region and make it through. There’s great competition and I’m really hoping that we can win one more game and than on to Rio Tinto.”