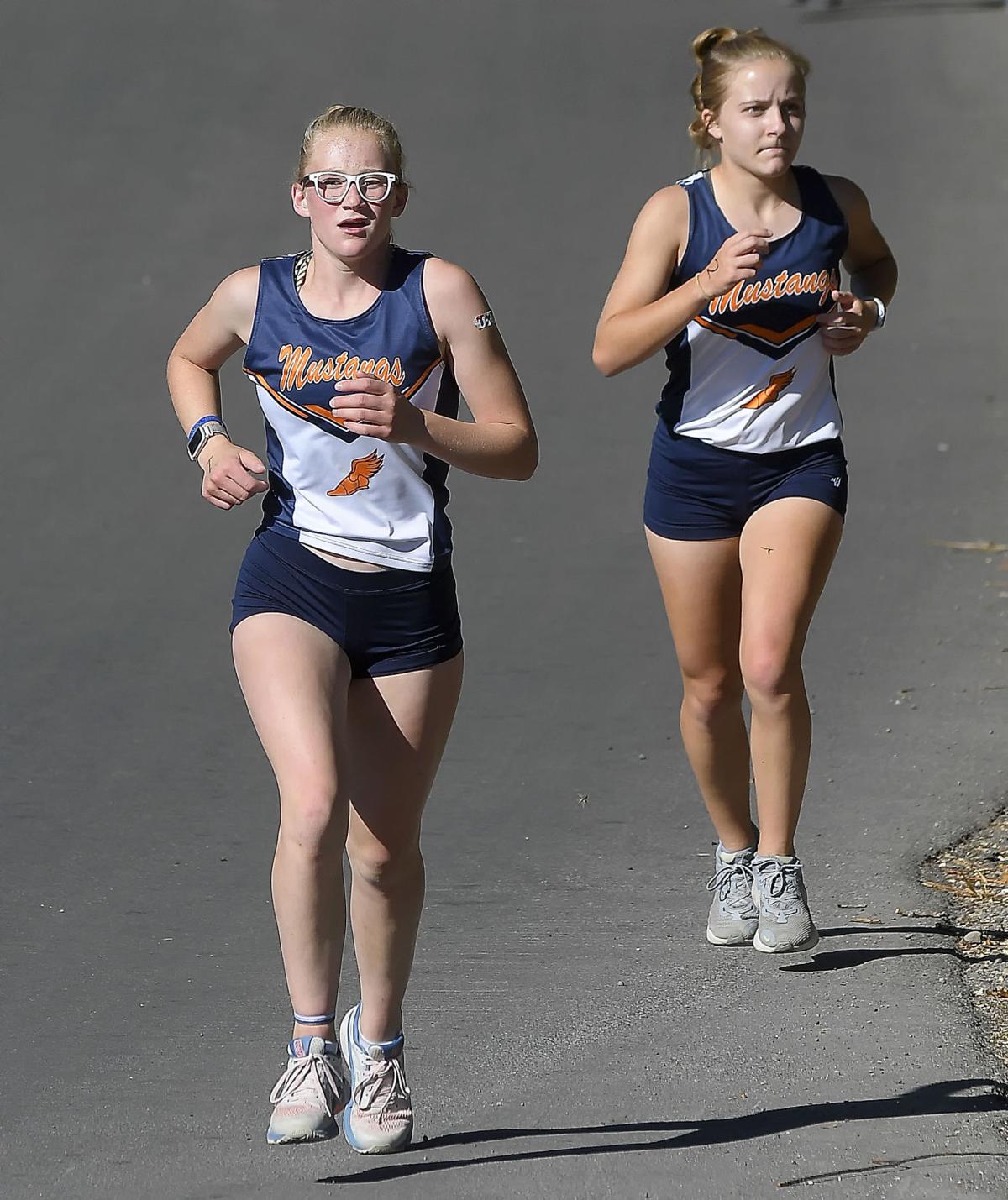 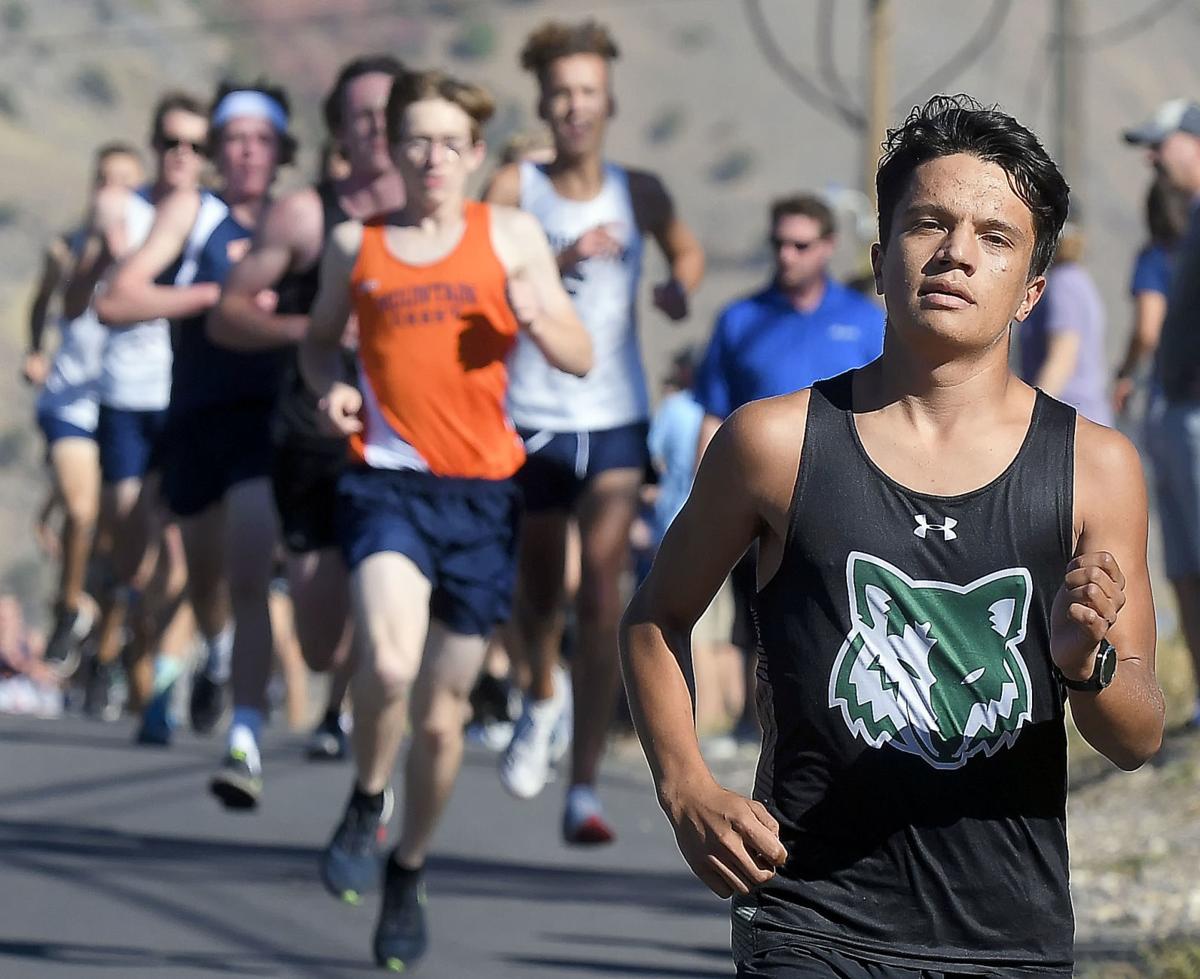 Green Canyon's Branson Sharp lead a pack of runners down a hill during a cross country race on Wednesday in Hyrum.

Green Canyon's Branson Sharp lead a pack of runners down a hill during a cross country race on Wednesday in Hyrum.

Every runner really did matter in both the girls and boys cross country races. There was no domination by a school at this meet on the final day of September under sunny skies.

“We are all getting ready for region and today was exciting,” Mustang Cameron Swenson said. “It’s great to run against really good competition.”

There certainly was some good competition on the 5K course that has several hills and plenty of viewing opportunities for fans. In the girls race, the Mustangs won by a nose against the Riverhawks, 34 to 35. The Wolves were at 55 points. In the boys race, Ridgeline didn’t have a runner in the top three but came out on top with 37 points, edging Green Canyon (42) and Mountain Crest (47).

“We are progressing well as a team and hoping to peak at region and state,” said Spencer Adams, who finished fourth and was the top Riverhawk. “We are all pushing really hard. Our region is really good.”

In the girls competition, the top four Ridgeline runners did not compete Wednesday. They are gearing up for a meet later in the week. Also the top Green Canyon girl did not run.

“I was going to try and stick with Katie (Latvakoski) from Green Canyon, but she wasn’t here,” Mustang Jordan Merrill said. “She really helped push me last week. ... I was also sad that some of the Ridgeline girls didn’t run.”

Merrill was pushed at the end by a Riverhawk, but the sophomore claimed the win with a time of 20 minutes, 35 seconds. She was eight seconds ahead of second-place Brynlee Brown of Ridgeline (20:43).

“I heard people yelling at the end, so I really tried to finish the best I could,” Merrill said.

A pair of Mustangs were in front for most of the race. Abbie Case finished third in 20:50.

“Abbie was flying today,” Merrill said. “... I had to kick up to Abbie and then push myself from there and see what I could do. My dad always helps me. He always tells me to count my steps. The whole time I count to eight over and over again. That helps me.”

To beat Ridgeline, Mountain Crest needed the next three runners to finish before Riverhawks. Marissa Hancock (21:30) was the third Mustang to cross the finish line, taking seventh. It came down to Kaelee Ward and Sam Erickson. That duo came in together at 22:17 and 22:18, in 11th and 12th place, respectively.

“We are doing really good this year as a team,” Merrill said. “I’m excited to see how we finish.”

Without their top four runners, the Riverhawks proved how deep they are with Brown leading the way.

“I just wanted to stick with that front group and try and keep up,” Brown said. “I know that Jordan and Abbie are really good runners. ... I tried to close the distance at the end and outsprint her (Case).”

“Our team has been so good this year,” Brown said. “It will be exciting to see how we do at region. We have trained hard and our goal is to win region. Bear River is a good team. ... Competition on our team has been insane this year. It’s been awesome and so fun.”

The top Green Canyon girl was Kaylee Baker, who finished sixth in 21:25.

In the boys race, it turned into a two-runner race. Green Canyon’s Branson Sharp took the early lead, but Swenson was on his tail. The two took turns in front for more than a mile.

“Today I decided to try a different strategy,” Swenson said. “A lot of people use it, have a conservative start and build your way up. I figured today wasn’t a huge meet, so give something new a try. It went well. The first mile I drafted Branson and followed right behind him and my first mile was quite a bit slower than usual.”

Swenson moved in front after the first mile, but the battle was on.

“We were just back and forth between mile one and mile two,” Swenson said. “I love racing Branson. He is a good guy.”

On the last hill, Sharp surged in front. The senior could not shake Swenson, but was able to outkick him barely. Sharp crossed in 16:55, with Swenson clocking 16:58.

“That was a great race,” Sharp said. “He (Swenson) has gotten me a few times and I’ve gotten him a few. It’s always back and forth.”

Sharp said it was good for him to have to battle Swenson.

“It was a good mental game for me to stick on him and then pass,” Sharp said. “I’ve been a little off mentally this season, so I tried to come in with a good mental mindset. It worked out really well for me.”

Sharp does like to go out strong and set the pace. On Wednesday, he got to the front, but tried to not push too hard the first mile. On the last hill, Sharp had planned his move and went to the front.

“He got me at the finish,” Swenson said. “I’m excited with my time. And we had one of our runners, Hyrum Staffanson, do really well. I’m really happy with how our team did today.”

Not far behind the top two was Green Canyon’s Jackson Monz (17:06). Adams (17:22) then led a flock of Riverhawks. The five runners that count toward the team points were in the top 11 for Ridgeline.

“Those guys in front set a good pace and I was hoping to catch back up to them in the last mile,” Adams said. “They kept going and I slowed down. It’s a fun course, but tough. The guys in front ran a great race.”