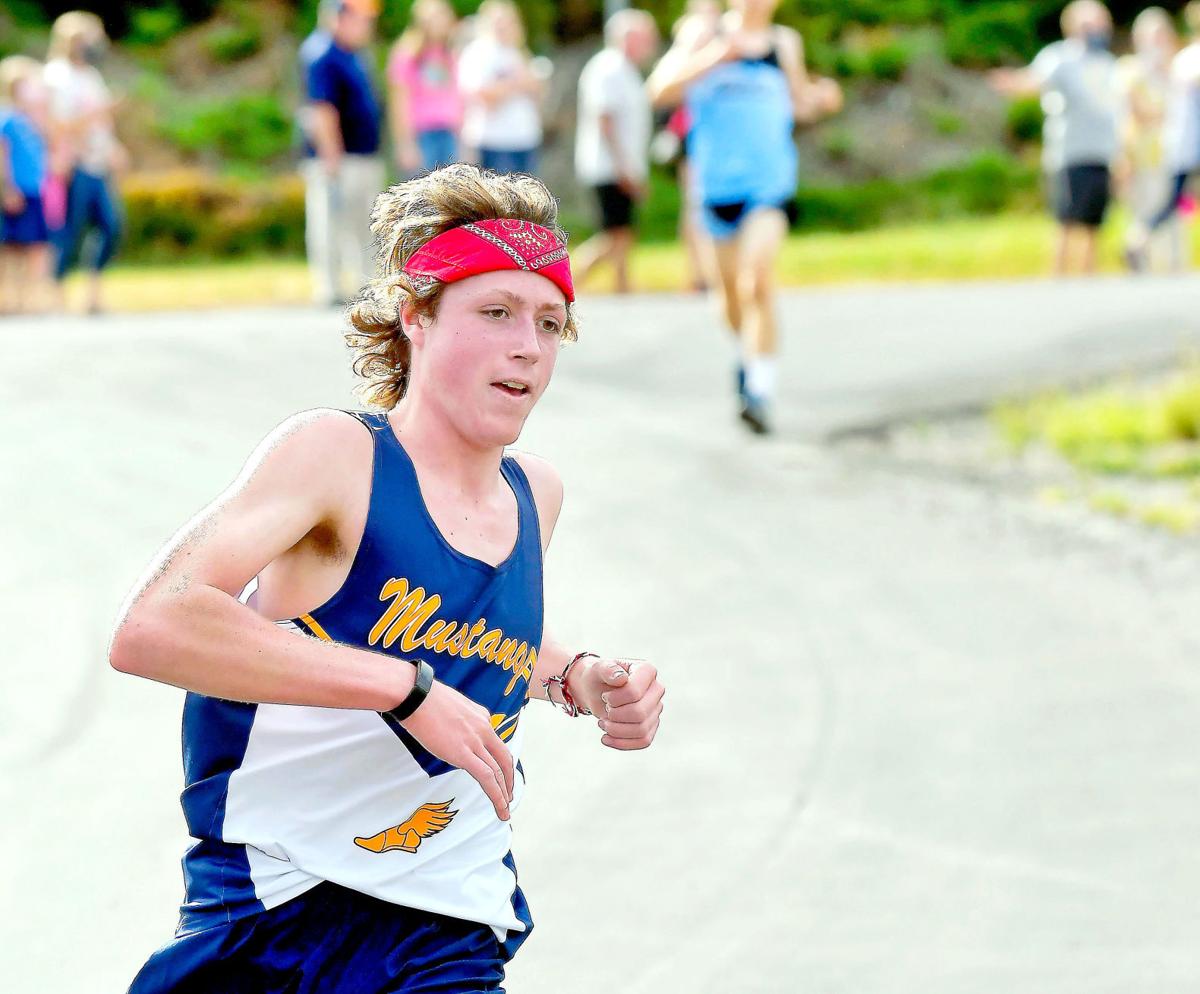 Mountain Crest’s Braxton Stoker runs down a hill during a cross country race against Sky View on Wednesday in Hyrum. 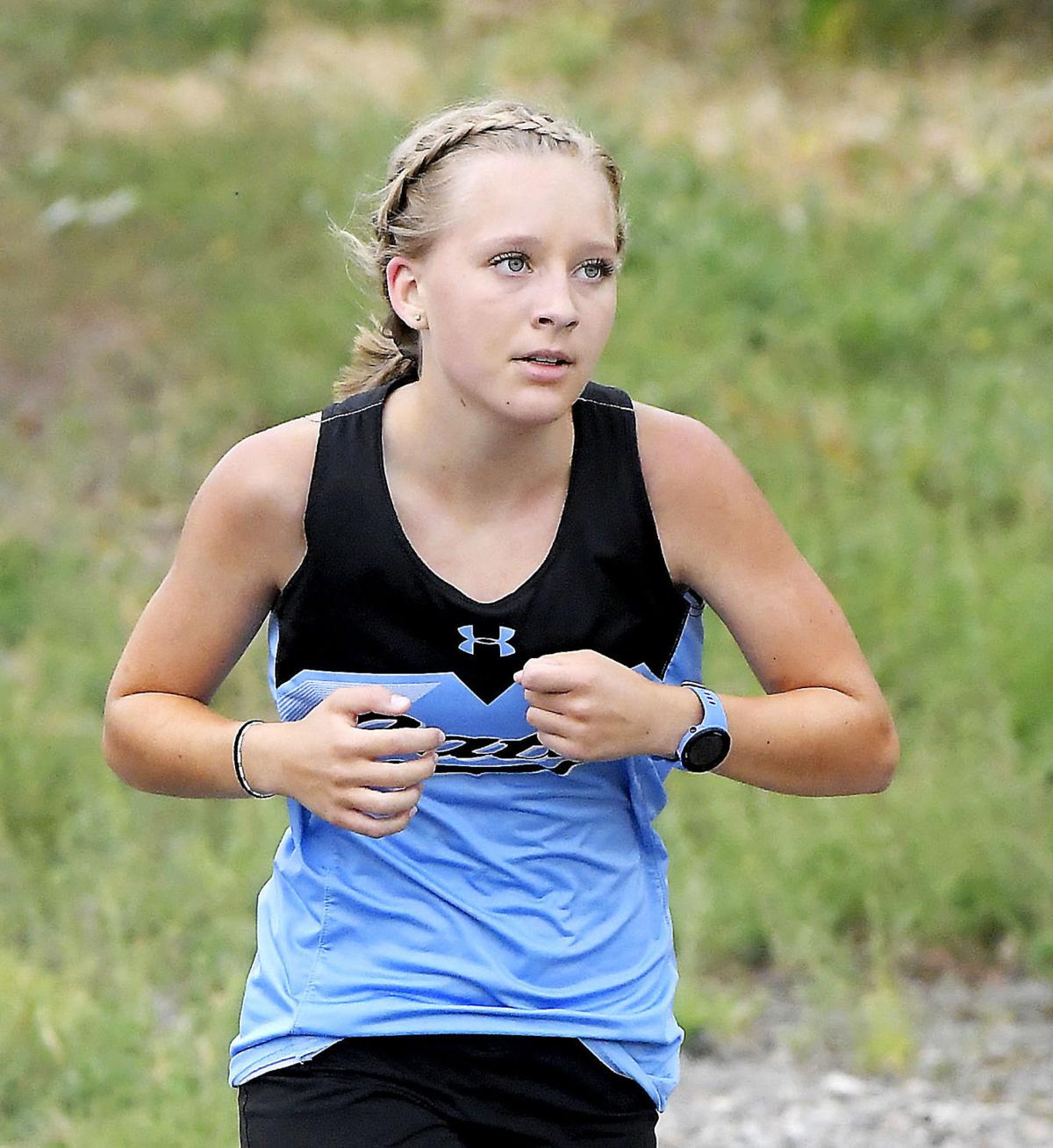 Mountain Crest’s Braxton Stoker runs down a hill during a cross country race against Sky View on Wednesday in Hyrum.

HYRUM — With temperatures predicted to flirt with triple digits again on Wednesday, high school cross country meets were moved to the morning.

Sky View visited Mountain Crest in both schools first action in the valley. The Bobcats and Mustangs were greeted with overcast conditions with a slight breeze at times.

Mountain Crest ran well as a pack and was able to top its visitors from the north in both the girls and boys races. In the girls competition, The Mustangs had their top five runners — who count toward the team score — among the top eight finishers. Mountain Crest edged Sky View, 26-33, despite a pair of Bobcats being the first two to cross the finish line.

Which of course included the Mountain Crest boys. The Mustangs were led by Braxton Stoker, who took the lead early and stayed there. Mountain Crest had runners finish third and fourth and had its top five runners in the first eight places to outpoint the Bobcats, 22-37.

“My strategy was to obviously win,” Stoker said with a laugh. “I wanted to race hard and give it my all. I usually go out a little harder and then try and push it to get the fastest time I can and try to win.”

The senior did jump out in front early and was able to beat Bobcat Isaiah Crookston by seven seconds. Stoker covered the 5K course in 17 minutes, 49 seconds.

“I knew there was a kid right behind me, so that last mile I was like, let’s try not to get beat. I got to keep pushing.”

Stoker and teammate Cameron Swenson set the early pace on the hilly course that runs by the cemetery and by the rodeo grounds. Swenson ended up taking fourth (18:29) as he had to stop a couple of times to try and stretch as he was dealing with some lower leg issues.

“We (Stoker and Swenson) usually start pretty fast,” Stoker said. “We like to stay together because we train together.”

“Running on your home course is great and helps because we train here and are familiar,” Stoker said. “It was also nice today and felt better than when we run here in the afternoon. It was really nice.”

The Mustang boys are without one of the top runners in the valley this season due to graduation. However, the MC boys are confident and feel there is more depth this year.

“The team is looking pretty good if we can keep everybody healthy,” Stoker said. “Hopefully we will do a lot better this year than last year. We have a really good pack.”

The Bobcat boys had three runners in the top seven. Following Crookston, a sophomore, was Joseph Eck in fifth (18:33) and Rome Greenmum in seventh (18:57).

“I felt like we did really good and I had a good split for the first mile,” Crookston said. “The last two miles were pretty rough. ... I’m really excited with our team. I feel like we are going to do better.”

In the girls race, a herd of Mustangs set the early pace. Kaylee Grigg and teammate Olivia Dickson had moved into the top two spots by the midway point. Grigg went on to top Dickson, 21:03 to 21:17.

“My goal was to crest at the hill and go faster with the downhill,” Grigg said. “I stayed in the front pack, towards the back of it. I felt really good after the first mile. The second mile, I felt really good and went into first place. The third mile, I just had to hold on an finish. I was just waiting to see the finish line.”

Grigg was especially happy to be healthy. She has been dealing with a hip injury most of the summer, but felt good on Wednesday. This was her first race this season.

“Today I didn’t run the time that I wanted, but I think I can get there,” Grigg said. “I’m excited for our team. I feel like our varsity is going to be fast.”

Sky View was without Kate Dickson, who is arguably their strongest runner.

Despite the top two finishers being Bobcats, the Mustangs had seven runners in the top 10. Abbie Case led the hosts, taking third in 21:43. Jordan Merrill (22:30), Kaelee Ward (22:47) and Marissa Hancock (23:02) were the next three finishers — all MC harriers.

MILLVILLE — In a tri-meet with Green Canyon and Bear River, Ridgeline once again showed they are a team to be reckoned with in Region 11.

Riverhawk Madison Patrick broke away a mile or so into the race and was never threatened. The senior beat her sister Alexis Patrick and teammate Mackenzie Duncan, finishing in 19:23 as Ridgeline had a perfect score of 15.

“We approached this as a fun race,” said Madison Patrick, who was the 4A champion last Saturday in Taylorsville at the Premier Invite. “We wanted to see where we were at. ... My plan was to not let my sister get me.

Alexis Patrick was second in 19:55, while Duncan was third in 20:50. In fact, the Riverhawks had the top six finishers and were without one of their top runners.

“Right now we have a really solid team,” Madison Patrick said. “We are really excited to see how it goes.”

Green Canyon was second with 53 points, followed by Bear River with 76.

In the boys race, Spencer Adams made a charge with less than a mile to go to overtake Green Canyon’s Branson Sharp who had led from the start and looked to be running away from the field for most of the race.

“I tried to start off a little slower, because I know Branson likes to get out fast,” Adams said. “He is a really good runner, so I had to keep kind of close so I could close the gap at the end. I prefer to run from the back. He (Sharp) had a good lead and I was like, ‘oh no.’ I just tried to keep the distance close.”

Adams moved into the lead with a half a mile to go. Being a 800-yard specialist in track, the Ridgeline senior felt confident as the finish line neared, clocking in at 16:45.

“I feel like finishing and speed is my strength,” Adams said. “I have to run smart.”

Like Patrick, Adams was the 4A champ at the Premier Invite last Saturday.

“We have some guys that have worked hard all summer, but our region is tough, so we will see,” Adams said.