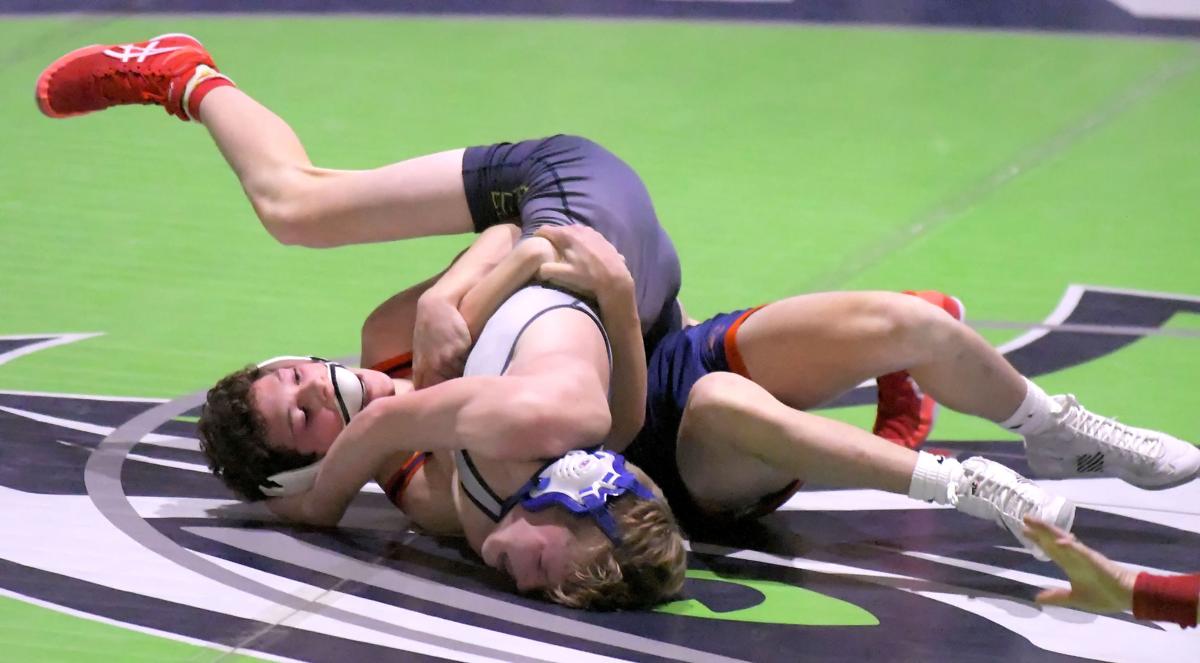 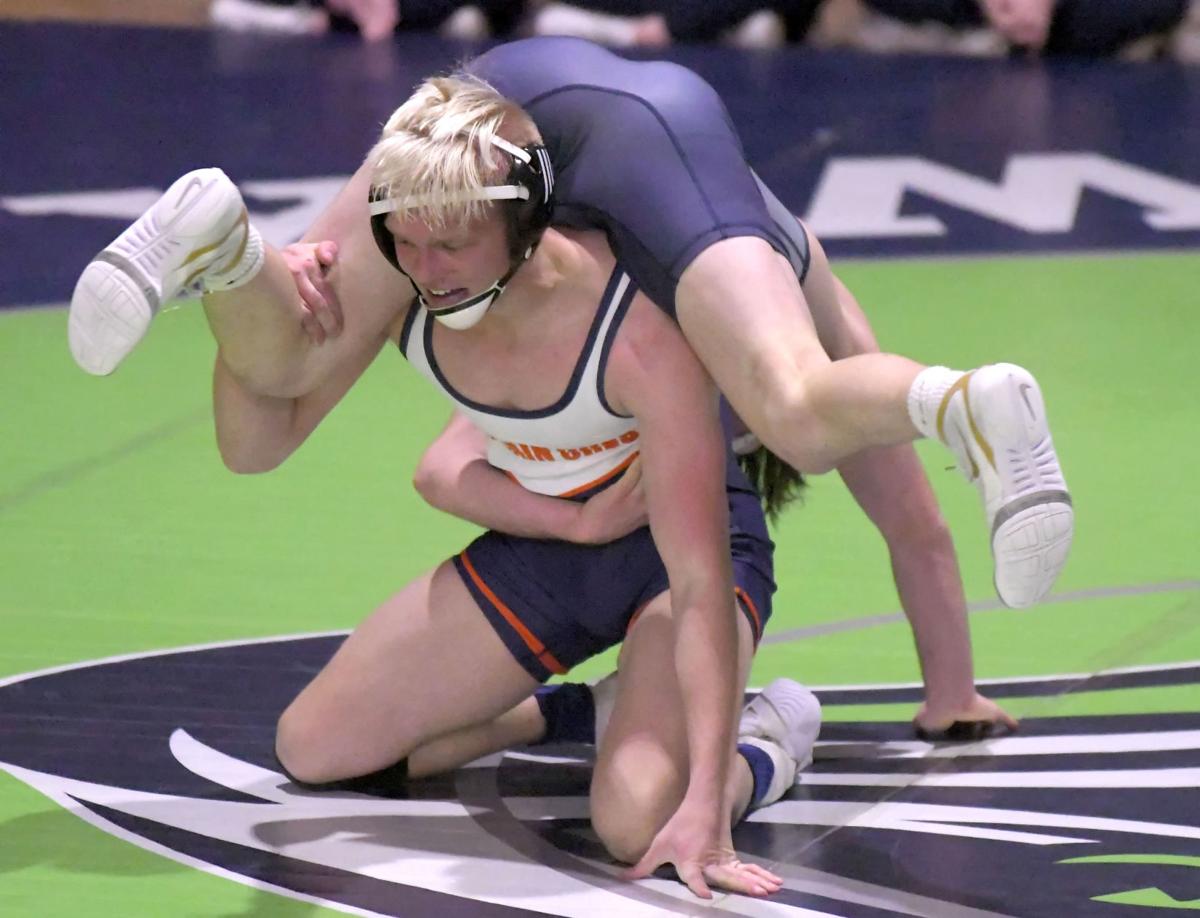 It’s fair to say Mountain Crest’s wrestling program will have the right combination of satisfaction and motivation heading into the 4A State Championships.

The Mustangs performed very well collectively, but at the same time lost a few matches they would like to have back at the two-day 4A Division A tournament, which concluded Saturday night at Desert Hills High School. Nevertheless, it was still a memorable tourney for the defending state champs as they blew away the 11-team field.

Mountain Crest accumulated a whopping 558 points, which was 306 more than runner-up Green Canyon. Additionally, the Mustangs crowned five champions, had four other finalists and had an impressive 24 state qualifiers.

“Some of the boys fell short of their personal goals,” MC head coach Jay Tovey said. “Overall as a team, though, we scored a lot of points and wrestled good. I’m excited to get back in the room for two more weeks and fine tune some positions and help our guys reach their potential at the state tournament. We want to get the most out of our team and have no regrets when we leave each tournament.”

It was also an unforgettable weekend for the Wolves, who were in fourth place following the first day of action. The best team in Green Canyon history crowned a pair of champions, had two other finalists and will be sending a school record 13 wrestlers to state.

Green Canyon was able rack up 14 more points than third-place Snow Canyon, despite standout heavyweight Garrett Herzog being banged up. The senior elected to forfeit his third-place match against Logan’s Ty Stearns.

“Yeah, we had a pretty good two days of competition,” GC head coach Ryan Webb said. “The kids fought really hard. Garrett will be fine. We were just trying to be careful and didn’t feel like third vs. fourth (place) made much difference. Mountain Crest was on a different level, but I felt we competed quite well with all the rest of the teams.”

Sky View was ninth with 131.5 points, followed immediately by Logan with 107.0. The Bobcats finished with six, possibly seven state qualifiers, while five Grizzlies punched their ticket.

Evans, the No. 2 seed, beat top-seeded Parker Hansen of Tooele in the finals, 3-1. Cooper Sanders pinned all four of his opponents in the tournament, while older brother, Gabe, had four pins and one major decision, as did Larsen. Smith won all four of his matches by fall. Schroeder and Hutchinson lost their championship matches by a combined three points.

“As the coach of a young program, you really hope for the best and I feel like we got the best out of what we had, which is a young team,” SV head coach Tony Holden said. “You know, a lot of these younger guys, they really surprised me (in a good way). ... You’ve got Mountain Crest down here, which is pretty much two deep in every weight. Man, we had a lot of good wrestlers down here, so for these kids to shine, these younger kids, yeah it blew me away, so I’m really pleased (with our performance).”

Leading the way for Logan were consolation titleists Jacqe Miller (170) and Stearns (285). The Grizzlies will also be represented at state by Ryan Lazzari (sixth, 126), Kadin Halona (seventh, 160) and James Wang (eighth, 220).

“We are moving in the right direction as a team,” LHS head coach Gerd Schroeder said. “We had some good individual efforts with Ty Stearns and Jacqe Miller. The best performance was by first-year wrestler and freshman Ryan Lazzari, who placed sixth and surprised some much more experienced wrestlers.”

The other two Region 11 teams, Bear River and Ridgeline, were at the 4A Division B tourney, which concluded Saturday at Uintah High School. As expected, host Uintah, the defending state runner-ups to Mountain Crest, pulled away from the competition as it amassed 528 points.

The Bears were second in the 10-team field with 398 points, followed by the Riverhawks (312.5). Ridgeline finished comfortably ahead of fourth-place Stansbury (241).

Ridgeline finished with a program record 16 state qualifiers and were led by champions Brenden Gessel (145) and Ronan Melani (195), and finalists Hudson Mosher (106) and Daimien Boehme (285). The Riverhawks had a trio of consolation champions in Nelson Munk (138), Owen Munk (145) and Kaden Kirk (170), to boot.

Gessell, the No. 3 seed, prevailed against the top two seeds in the tourney, while Melani dominated all four of his opponents, defeating three by fall and one by major decision. Boehme was edged in the finals, 3-2.

“It was very rewarding to see Brenden Gessel break through (as a senior) and win divisionals,” RHS head coach Jarrett Morrill said. “He’s such a hard worker and such a great kid, and it just makes you happy to see a kid like that come through and win. Ronan looked excellent as well, pinning a kid in the finals. He had a great tournament and he has a great shot at winning state as well.”

Morrill was also very pleased with Kirk, who battled back from an early loss with four straight wins, all in pinning fashion. The returned state runner-up has been hampered this season by a hand injury, and “he showed a ton of heart this weekend,” Morrill asserted.