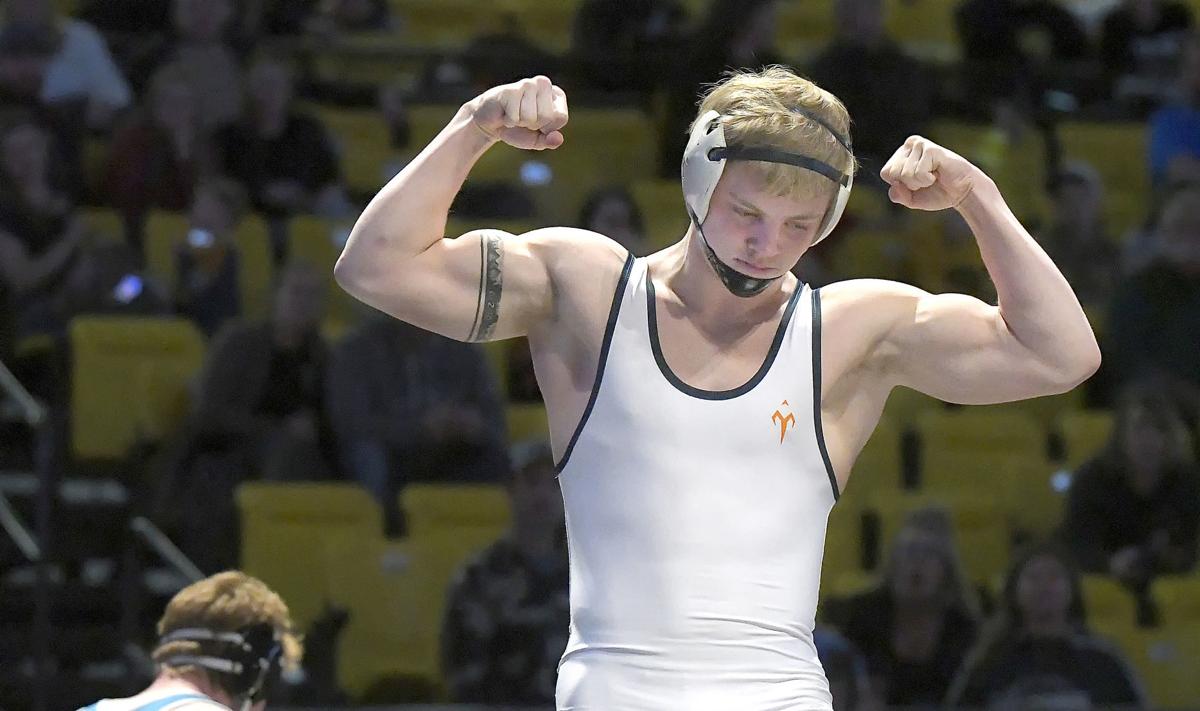 Mountain Crest’s Brayden Guthrie celebrates after pinning Canyon View’s Gavin Carter in the 182-pound championship match at 4A state tournament on Saturday in Orem. To view more photos from the tournament, go to hjnews.com. 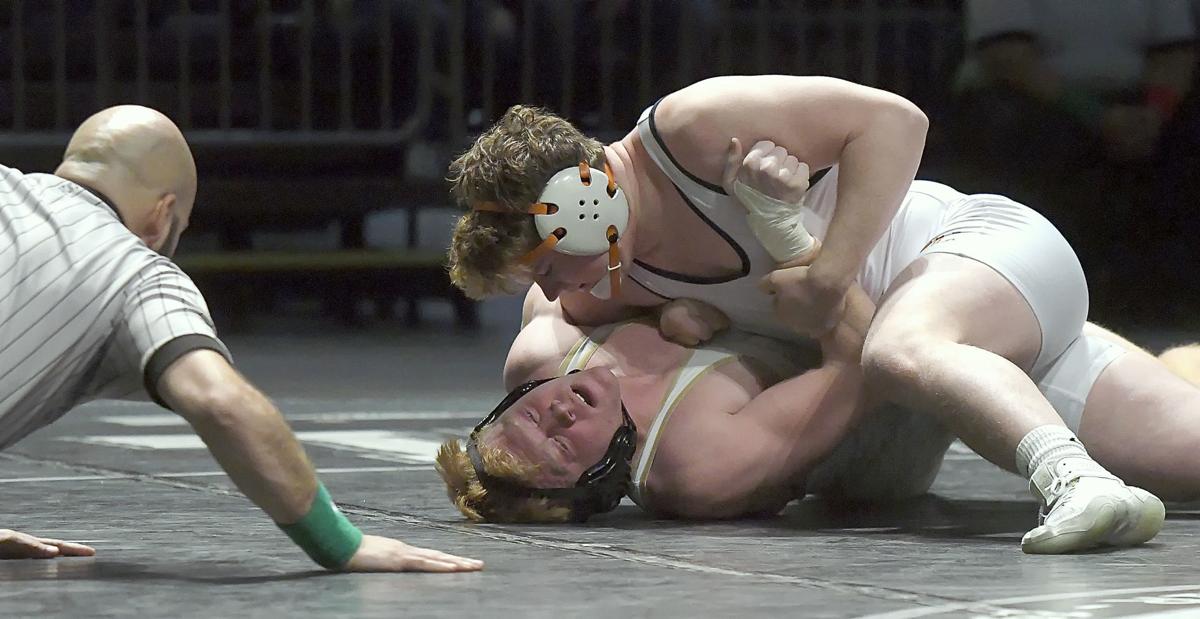 Mountain Crest's Hunter Schroeder pins Desert Hills' Gage Hall in the 195-pound championship match in the 4A state tournament on Saturday in Orem. 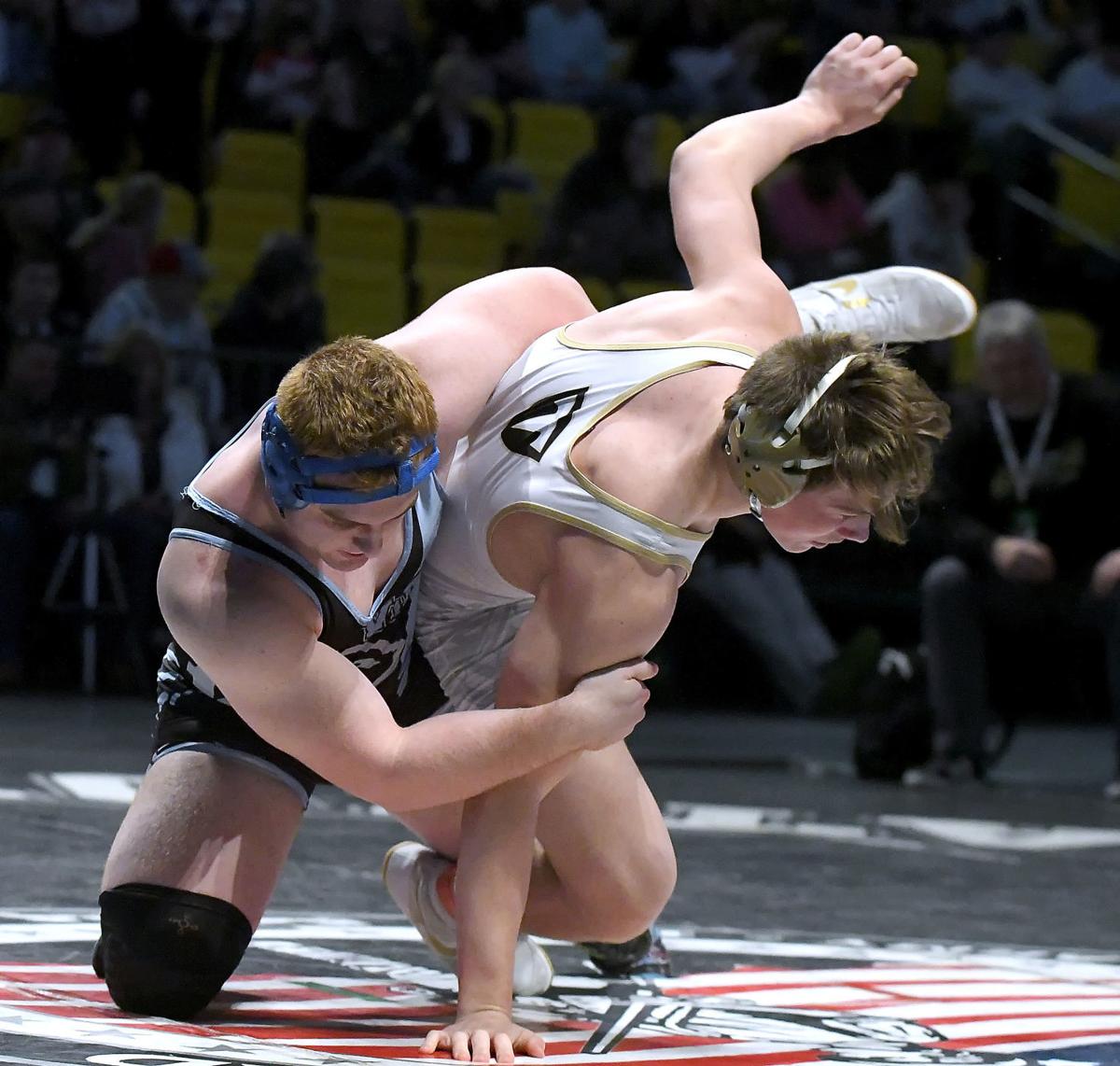 Mountain Crest’s Brayden Guthrie celebrates after pinning Canyon View’s Gavin Carter in the 182-pound championship match at 4A state tournament on Saturday in Orem. To view more photos from the tournament, go to hjnews.com.

Mountain Crest's Hunter Schroeder pins Desert Hills' Gage Hall in the 195-pound championship match in the 4A state tournament on Saturday in Orem.

OREM — Some wrestling teams excel because they have star power, and others because they possess superior depth.

Mountain Crest had both during the 2019-20 campaign, and the reward was a seventh state title in program history.

The Mustangs had more finalists (seven), champions (four) and placers (14) than any of their rivals, which allowed them to reign supreme at the 4A State Championships on Saturday night at Utah Valley University’s UCCU Center.

“All year we’ve had a mixture of both, where we could have guys win nearly every tournament or every match they had, and they we’d have guys coming out (of the consolation bracket) and scoring valuable points,” MC head coach Jay Tovey said. “And it’s been fun. I think it’s a credit to our room. I mean, we have 70 kids in our room and most of our third guys on a lot of teams would have a chance to get here (to state), but we have a lot of depth.

“It’s mostly the community and a lot of families, people who love wrestling, so I think that’s kind of what filters to Mountain Crest is, one, David (Swensen) building a program up, and then people falling in love with wrestling.”

The Mustangs, who had 21 different kids win at least one match at state, had already earned the first-place trophy heading into the championship round, but continued to extend their margin of victory by capturing four individual titles. Brother Luke and Hunter Schroeder earned the right to stand on the top spot of the podium, as did Cooper Sanders (120 pounds) and Brayden Guthrie (182). Mountain Crest’s other three finalists were Easton Evans (106), Terrell Lee (126) and Gabe Sanders (138).

Guthrie’s prep career culminated with a stunning performance at state as he pinned all four of his opponents in 43 seconds or fewer. The senior only needed 18 seconds to dispatch of two-time state runner-up Gavin Carter of Canyon View in the finals.

For his efforts, Guthrie was selected as the most outstanding grappler of the upper weights.

“It was fun,” Guthrie said of his dominance. “It just means a lot of hard work pays off. That’s all I can say, really.”

Guthrie, who suffered a season-ending injury as a junior, was able to bask in his success with younger brother, Brock, who was the consolation state champion at 182 pounds. All four of Brock Guthrie’s wins at this tourney were by fall.

“It’s been super fun,” said Brayden Guthrie, who was a state runner-up as a sophomore. “I wish I had more time to wrestle with him. It’s been a blast. He’s doing super good and I think he’ll do really good these next two years.”

Success among brothers was a theme for the Mustangs on Saturday — and during the entire season, for that matter. Luke Schroeder rolled to a 10-3 triumph over Canyon View’s Jake Olsen in the finals at 113 pounds, while older brother Hunter capped off his Mustang career with a gratifying title at 195 pounds. Thirty years ago, the father of Hunter and Luke won a state title, as did his brother.

Like Brayden Guthrie, Luke Schroeder was a legitimate state championship contender a year ago before breaking his elbow in practice. The sophomore secured a pair of takedowns and a two-point tilt to jump out to a 6-1 first-period lead over Olsen, and he never looked back.

“After that (injury last year) I was pretty down on myself, but I started working really hard,” Luke Schroeder said. “I actually quit football to focus on wrestling so I could gain back all of that time I missed. And then I did even more in the morning with my dad. It was fun to see it all pay off.”

Hunter Schroeder won his final high school match in pinning fashion, just like he did in his other three bouts this weekend. The all-state football player caught Gage Hall of Desert Hills in an arm spin, his signature move, and stuck him at the 1:27 mark of the opening round. Hall only lost one other match this season.

“That’s exactly the way I wanted it to be, honestly,” Hunter Schroeder said. “I was just thinking before I was getting ready (for this match), I was like, ‘it really would be nice going out with my favorite move.’ And I did it and it felt good.”

Hunter Schroeder is now a three-time state placer as he finished fourth as a sophomore and third as a junior.

“Last year I lost my first match when I was leading 9-0, and I went all of the way back and took third,” he said. “I ended up going up against a kid that got (upset) and he was ranked first (in 4A), and so it was a hard second match. But I was thinking about quitting, but I just decided, ‘you know what, I might as well just give it my all. If I lose, I lose, and if I win, I win.’ So, that’s how I thought and that’s how I wrestled, and this year too.”

Mountain Crest was oh so close to having two sets of brothers claim first-place medals. Freshman Cooper Sanders caught Green Canyon’s James Shumway in a barbed wire and finished off the pinning combination at the 3:37 mark. Sanders and Shumway had squared off two other times this season, and both matches were absolute nailbiters.

“It means a lot and I just thank my partners at practice and the coaches,” said Cooper Sanders of peaking at the right time. “And I’m just really grateful for the opportunity to (compete on this stage).”

The freshman credited his older brother, Gabe, for helping him achieve his goal. Gabe Sanders was a state champion last year as a freshman.

“It just inspired me to get better and I just look up to him a lot,” Cooper Sanders said of watching his brother excel. “He’s a great wrestler.”

Gabe Sanders was in good shape to make in back-to-back state titles, but Uintah standout August Harrison was somehow able to battle off his back and eventually turn the tide on the Mountain Crest sophomore late in the third round with a cradle. The Sanders/Harrison showdown was arguably the most anticipated one in the entire tourney.

Lee also came up short in a very competitive title bout, although he was the aggressor in a 6-4 setback to Uintah’s Brady Merkley. The sophomore was a bit unlucky he wasn’t awarded two near fall points after taking Merkley down straight to his back in the opening round.

Evans, Mountain Crest’s other finalist, was pinned in the final second of the first round by Bear River’s Trenton Ward, who is quite possibly the top 106-pounder in Utah regardless of classification. Notwithstanding his loss, Evans, who only weighs 90 pounds, was one of the breakout performers in the tournament.

In addition to Shumway — Green Canyon’s first-ever finalist — and the seven Mustangs, Cache Valley was represented by three other athletes in the championship round. Sky View’s Hunter Larsen (220) capped off a sensational 50-3 senior season by pinning Dawson Bundy of Desert Hills with 1:10 remaining in the final round. Ridgeline’s Colter Ricks (145) and Kaden Kirk (170) were runner-ups in very competitive weight classes.

Larsen was dismantling Bundy, who won 47 matches this season, before finishing him off. The senior excelled in all three positions and was well on his way to a win by technical fall.

“This means so much,” said Larsen, who helped propel Sky View to a state football title and, like Hunter Schroeder, was a first-team all-state honoree. “It’s been so great that all of my hard work has paid off. I’ve had a lot of success this year and it’s felt great. Not very many people have that opportunity, so it felt nice to take advantage of it.”

Larsen was the consolation champion at this tournament a year ago and just missed out on advancing to the placement rounds as a sophomore. Those experiences helped Larsen take that final step as a senior.

“It helped me a lot, just because you know how to mentally prepare and know what’s coming,” Larsen said. “And the pain of the past helps you to want to succeed in the future, and that’s what’s been big for me.”

Ricks wrapped up his memorable prep career as a three-time state medalist and he put together a strong effort in a 6-3 loss in the finals to three-time state champ Ryker Boyce of Desert Hills. Ricks, who fell to Boyce in convincing fashion a week ago, scored the final three points of the duel.

Kirk lost in the first round to Uintah star Dylan Swift in the finals, but the junior shined in his other three bouts, especially against MC’s Brock Guthrie in the semifinals.

“Colter and Kaden both wrestled a great tournament,” RHS head coach Jarrett Morrill said. “I was very pleased with Kaden. That’s the first time that he’s beaten the Mountain Crest kid. ... Colter, we were more expecting him to make the finals, and we knew he’d (get) Boyce and it would be a tough match. And obviously he didn’t come out on top, but he wrestled him a lot better and wrestled a really tough match. And so even though he didn’t pull that out, I was very proud of him. I was also proud of Rhett (Gebert) for coming back to get third place.”

“Although he didn’t win the championship, he really performed well this weekend,” GC head coach Ryan Webb said of Shumway. I’m also proud of Daxton Darley, a second-year kid placing in the state tournament as a sophomore. Really thought this whole team contributed to the effort. If you spend even a few minutes in our wrestling room, you’ll see that we are united in our goal to improve. I love these kids.”

Other Mountain Crest medalists were Cael Smith (sixth, 152) and Walker Hutchinson (sixth, 182). Hutchinson was winning his fifth-place match before suffering an injury. Of the Mustangs’ seven finalists, five are underclassmen, and nine of their 14 placers will be back next season.

“We have a really young team and I don’t know if people notice that,” said Tovey, who was selected at the 4A Coach of the Year. “We have a good middle school program, we have a good kids club and we hope we can keep (this momentum) going, where we have kids coming through where when they show up to high school, it’s not like we’re trying to rebuild them and teach them everything. They already know what we do and how we compete.”