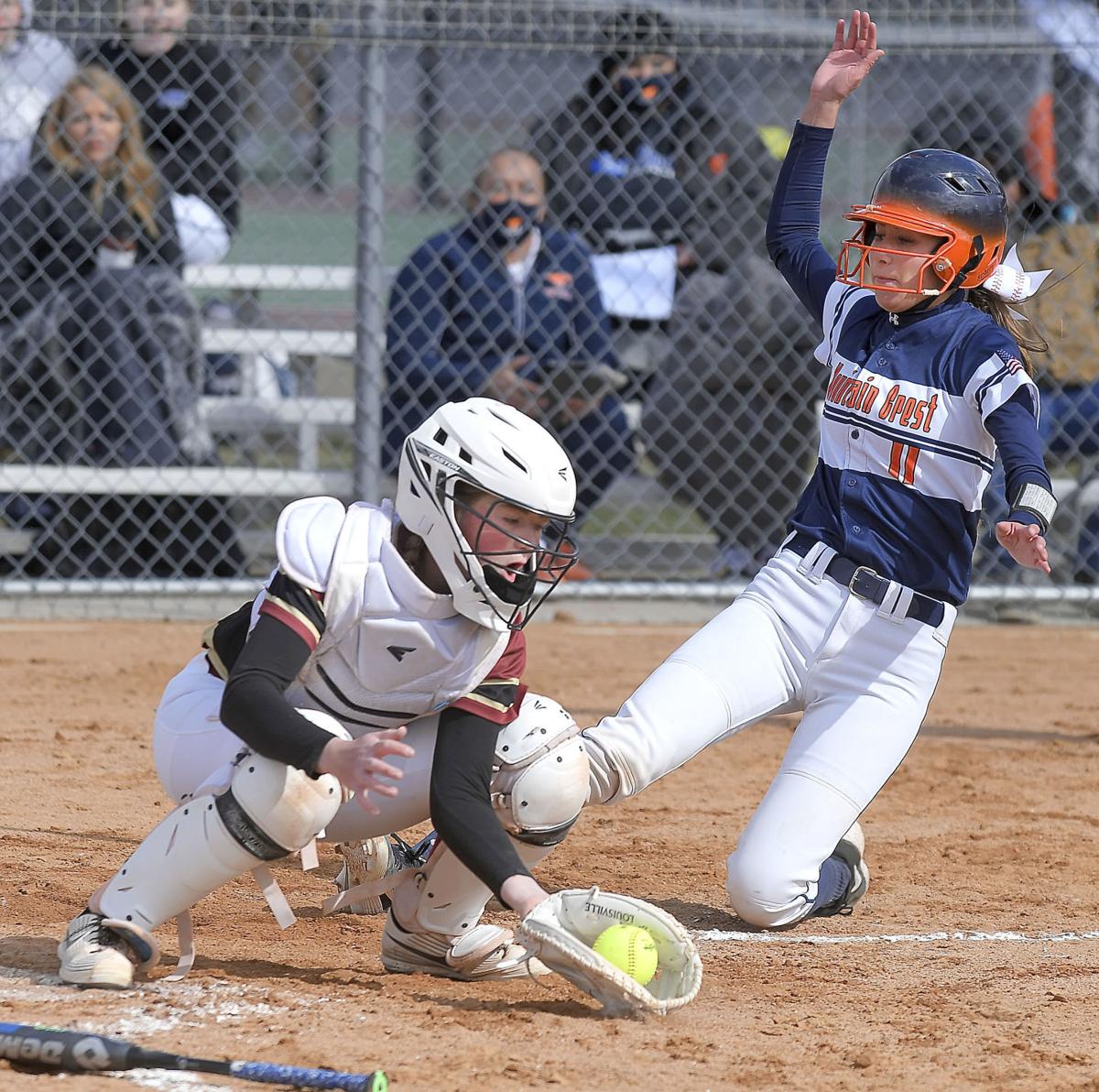 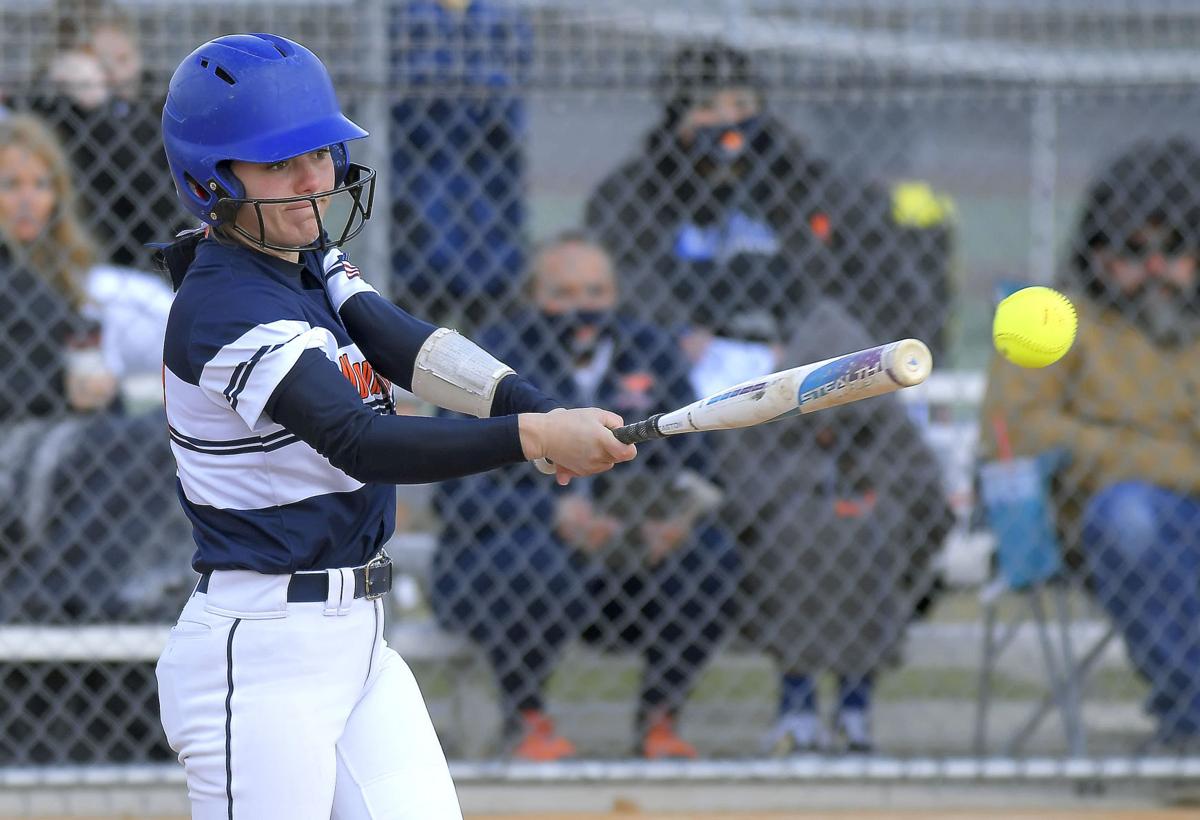 Mountain Crest's Emma Child hits the ball against Logan on Tuesday in Logan. The Mustangs won the game, 18-1.

Mountain Crest's Emma Child hits the ball against Logan on Tuesday in Logan. The Mustangs won the game, 18-1.

Out to prove they are going to be a contender in Region 11 this spring, the Mustangs are certainly off to a great start.

Mountain Crest plated 12 runs in the second inning Tuesday on its way to a fifth straight victory after opening the season with a setback. On a sunny, but chilly afternoon, the Mustangs galloped right by host Logan in three innings, 18-1.

“We have started some games out slow, but then usually we pick it up,” MC second baseman Maddy Bertagnoli said. “When we get going, it’s a lot of fun.”

With the win, the Mustangs (5-1, 3-0 region) remain atop the league standings with Bear River. However, their next two region contests will be against Ridgeline and the Bears.

“So far, so good this season,” MC head coach Courtnee Maughan said. “We are improving on the things we want to improve on every game. Right now we are focusing on expecting to win every game. … The top of this region is going to be tough.”

The Grizzlies (1-11, 0-3) are still trying to put a complete game together. Logan played well for stretches Tuesday scattering five hits, but six errors did the hosts in.

“We start out good, then we need to refind ourselves,” Grizzly head coach Lexi Hatch said. “We found a little bit at the end. We just need to hold it together in the middle. This region is really good. Our girls are good too. We will get it together.”

Mountain Crest took advantage of the errors, but also four extra base runners by drawing three walks and getting a batter hit by a pitch. The Mustangs finished with 12 hits as 11 different athletes recorded a baseknock. Twelve different Mustangs scored at least a run and 10 players had at least one RBI as Maughan went deep on the bench in the third inning. Sixteen players stepped in the batters box during the game for Mountain Crest.

“We want to see those kids that don’t always get in the varsity game and see who is going to have the confidence to step up in case you need them down the road,” Maughan said. “We’ve got so many good, young players. I have lots of options.”

The Mustang have five seniors, but also some youth in seven freshmen with five of them seeing regular time with the varsity.

“It’s awesome to see all other other girls do well,” said Bertagnoli, who was 2 for 2, drew a walk, scored twice and had an RBI.

Halle Maddock picked up the win in the circle with two strikeouts in two innings of work. She also had one of the five doubles by the Mustangs on the day and led the team with three RBI.

Mountain Crest took advantage of a Grizzly error in the top of the first inning. Bertagnoli reached base on a bunt single, stole second and scored on an error to give the visitors the early 1-0 lead.

Logan got a single from Taysha Romney and Maya Jacome was hit by a pitch to give the hosts two base runners in the bottom of the first. However, the Grizzlies could not take advantage.

Two errors to start the top of the second did not bode well for Logan. When the dust had settled, Mountain Crest sent 16 batters to the plate, recorded seven hits and blew the game open. With the bases loaded, Maddock cleared them with a three-run double to the fence in left center. Brooklyn Clark had an RBI double, and Aspen Leishman smacked a two-run double as the Mustangs built a 13-0 lead.

“It usually just takes one batter to open it up for us,” Bertagnoli said. “That’s when we say, ‘all right, let’s go.’”

Maddock needed just nine pitches to retire the Grizzlies in the bottom of the second.

Maughan went to her bench in the third. They scored five runs as Logan had two more errors to help extend the rout. Eastyn Nyman led off with a double, Kate Souter had a two-run single, and Gaby Pedry had an RBI double as the Mustangs built a 18-0 lead.

“We came alive in the second,” Maughan said.

The Grizzlies did show some life in the bottom of the third with three hits. Abbey Hart led off with an infield single, moved to second on a bunt single by Kaylie Peterson and scored on a single to right by Jacome. But the rally ended with a pop up and a ground out.

This is the lone region action of the week as teams now step out of league play later in the week.

At Garland, the Bears (7-3, 3-0) pushed two runs across in the second, which would be more than enough. However, the hosts added four more in the fourth to take control.

The Bobcats (5-5-1, 0-3) had three hits and committed two errors. Skylee Haramoto, Abbey Cantwell and Cambrie Davis each had hits for Sky View.

Olivia Taylor went 3 for 4 with two runs for Bear River, while starting pitcher Baylee Sorenson struck out 11 and did not issue a walk to get the win.

At North Logan, the Riverhawks (8-2, 2-1) jumped on the Wolves (5-7, 1-2) early and kept adding to their lead. Ridgeline brought three runs home in the top of the first and doubled its lead with three more in the third for a 6-0 advantage. The Riverhawks scored four more in the fourth and held Green Canyon scoreless to end the game early.

Markessa Jensen went 3 for 3 at the plate for Ridgeline with a double and two RBIs. She also pitched four innings for the win, striking out eight and walking two. Kori Palmer went 2 for 3 with two runs, three RBI and a double. Eight different players recorded a hit as the Riverhawks had 11 in the game.

The Wolves had three hits and committed five errors. Madi Peterson, Annika Eborn and Mcall Kaae each had singles for the hosts.