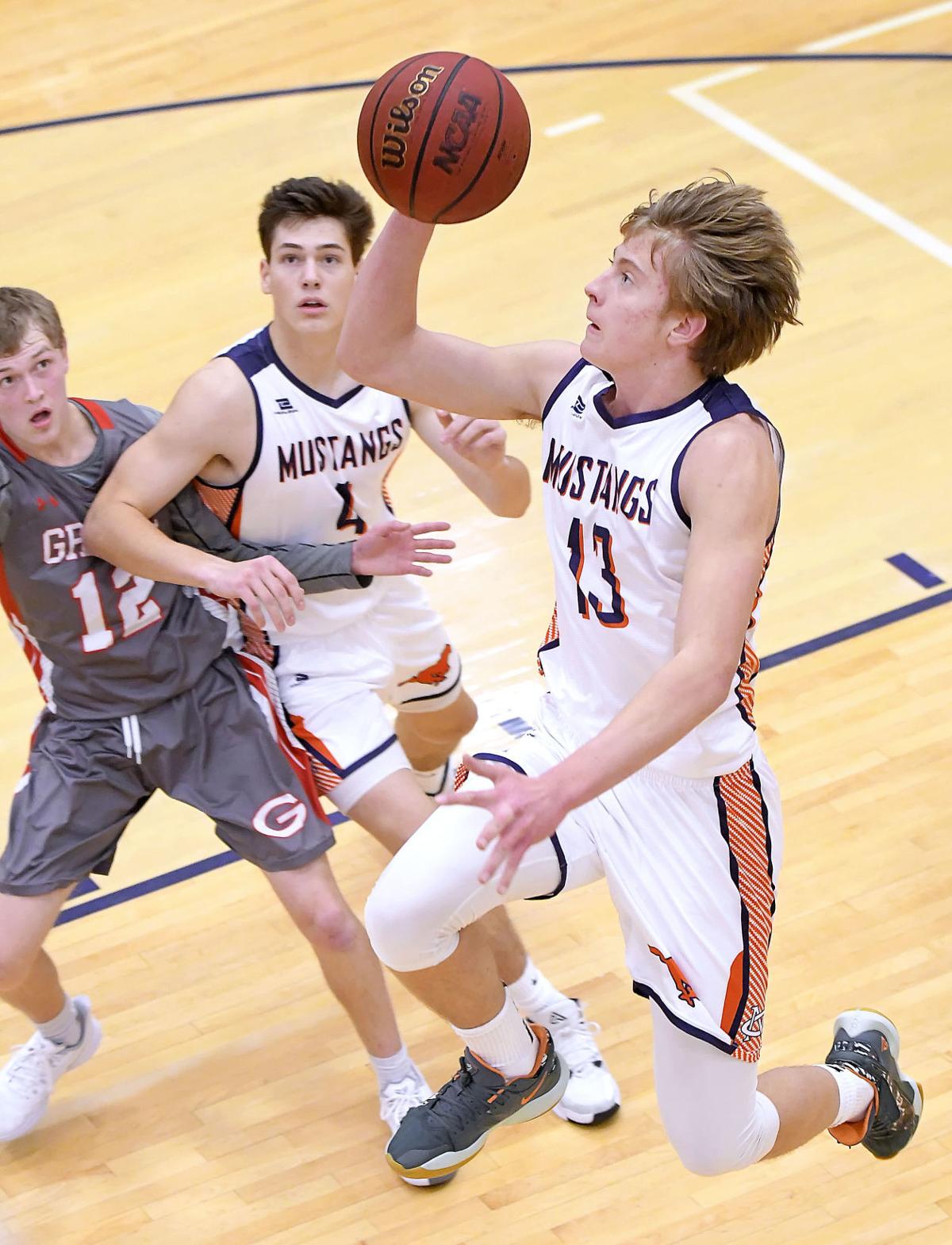 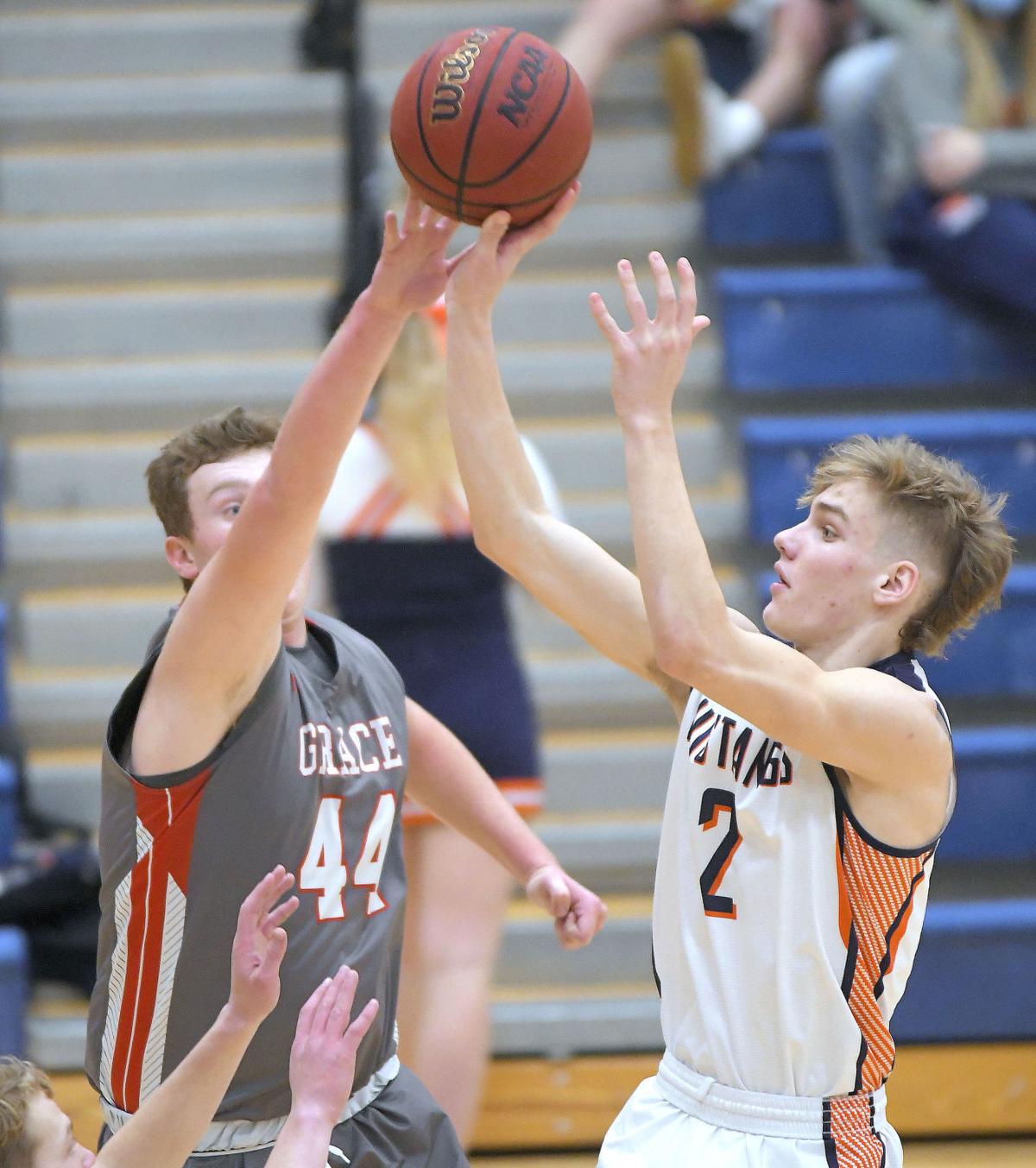 HYRUM — There’s no question the 2020-21 boys basketball season has been challenging for the Mustangs, who have already been forced to cancel or postpone four games thanks to COVID-19.

Additionally, the Mustangs weren’t able to practice or play a game from Dec. 20-Jan. 4, but to their credit they looked pretty sharp in their long-awaited return.

Mountain Crest buried 3-pointers on its first two possessions of the game and never looked back en route to a 54-32 victory over Grace (Idaho) on Tuesday night at the ICON Activity Complex. The Mustangs held their first practice since mid-December on Monday and it’s fair to say they were adequately able to shake off the cobwebs.

“Yeah, it’s a different year,” MC senior Tanner Bone said. “Everyone knows that, but we’ve just got to go out there, we’ve got to go dig deep and just go have some fun. It’s been a while since we’ve played, so just go have fun out there and just go play together, play with your teammates. That’s all we can ask for. I mean, with so few practices we’ve just got to go bring the energy and compete, and we did that tonight.”

Getting off to a solid start certainly helped. The Mustangs (2-5) scored the first eight points of the game and never let their lead dip below six. The hosts took a 14-5 lead into the second quarter and a commanding 28-9 advantage into the locker room.

“It’s always nice to see those shots go in early, and then if you can get a few (defensive) stops to go with it and just try to build on it, then that’s good for us to see, especially when it’s been so long since we’ve been on the court together,” MC head coach Kevin Andersen said. “But yeah, the start was huge for us.”

Indeed, it was a strong defensive performance for Mountain Crest, which rarely allowed Grace to get off easy shots. The Grizzlies (0-6) did miss a couple of layups in the first half, plus misfired on six free throw attempts.

The Mustangs were able to limit all-state guard Gage Stoddard to six points, which was a huge factor in the game. Stoddard helped propel Grace to Idaho’s 1A state championship game a year ago.

“We knew that he was their leading scorer, their best player and we had to know where he was (at all times),” Andersen said. “And I thought we communicated OK tonight defensively. We’ve got to get a little better at that, but yeah I was pleased with our defense tonight.”

The Grizzlies finally started knocking down some shots in the third quarter as they scored on their first four possessions. In fact, Grace netted as many points in the first two minutes of the second half as it did the entire opening half.

Nevertheless, Mountain Crest was able to quell Grace’s momentum by routinely getting to the basket in the third quarter. Case in point: The Mustangs netted eight of their 16 points in the quarter on drives to the rim. Mountain Crest’s countered Grace’s early surge with a 10-0 run. Four different Mustangs scored during that stretch.

“At halftime we talked about just acting like the (score was) 0-0 and we’ve got to stay aggressive, we couldn’t be complacent,” Bone said. “They were coming up on us, so we just knew we had to take it to the basket and stay aggressive.”

It was a balanced offensive effort for the Mountain Crest, which got 11 points from Joseph Hunsaker, 10 from Bone, nine off the bench from Caden Jones, eight from Nick LeFevre and six from Tyson Merrill. Nine different Mustangs finished with at least one point.

“That’s what we talked about (is) that if we just make a correct basketball play and don’t worry about who’s making the shots, just make the correct play ... and that’s got to be our mentality,” Andersen said. “When we play that way, there’s moments we look pretty good.”

Three other local prep boys teams were in action. Logan bounced back from last weekend’s setback to Preston by dispatching of Box Elder at home, 62-55. Meanwhile, Sky View lost at home to Bonneville, 40-37, while Ridgeline fell on the road to 6A power Westlake, 76-54.

The Grizzlies (7-2) gave themselves some breathing room by outscoring the winless Bees 22-9 in the second quarter. Ethan Davis finished with 11 of his game-high 17 points in the first half for Logan, which got 15 points from Jadin Penigar, 12 from Isaac Tuft and nine from JJ Sargent. Tuft scored all of his points on shots from 3-point land.

“We responded very well from a disappointing loss to Preston,” LHS head coach Logan Brown said. “Our team culture was a big factor in the win.

“We did a good job against a big Box Elder team. We had nine guys come in and produce for us. Cooper Pond was excellent in the post and Ethan Davis continues to grow as a player and lead us when we need it.”

Of Box Elder’s nine loses this season, seven have been by seven points or fewer.

Sky View (6-2) struggled offensively and saw its five-game winning streak come to an end. The Bobcats went 5 of 13 from the free throw line and that loomed large against the Lakers (6-3).

“Credit to Bonneville,” SV head coach Kyle Hillyard said. “They played harder than we did. We have to be better. We will work on a few things offensively and be ready for Friday.”

Westlake (10-1) jumped out to a 16-8 lead over Ridgeline (4-7) and gradually extended its advantage en route to its eight straight victory. The Riverhawks have squared off against several teams with impressive records so far this season.

Peyton Knowles was Ridgeline’s leading scorer with 15 points, followed by Kaden Cox with 11, Spencer Adams with nine and Strat Simmons with eight.

“Westlake really made us work tonight on both ends of the floor and, ultimately, they overwhelmed us and pulled away in the second half,” RHS head coach Kyle Day said. “I was proud of how we competed. We definitely learned some things tonight.”

It was a memorable Tuesday for Ridgeline, which earned a big 59-56 road victory over 5A Box Elder (5-3). In the process, the Riverhawks were able to increase their winning streak to four.

Haley Anderson and Sarah Litchford combined for 49 of Ridgeline’s points. Anderson filled up the stat sheets with 28 points, four rebounds, five assists and two steals. Litchford poured in 21 points and pulled down five rebounds by the Riverhawks (6-3), who got a team-high nine boards from freshman Hallee Smith.

“It was a battle the whole game,” RHS head coach Ainsli Jenks said. “I was proud of the girls for staying dialed in and finishing the game strong. Box Elder is a great team and it was good to come home with a win.”