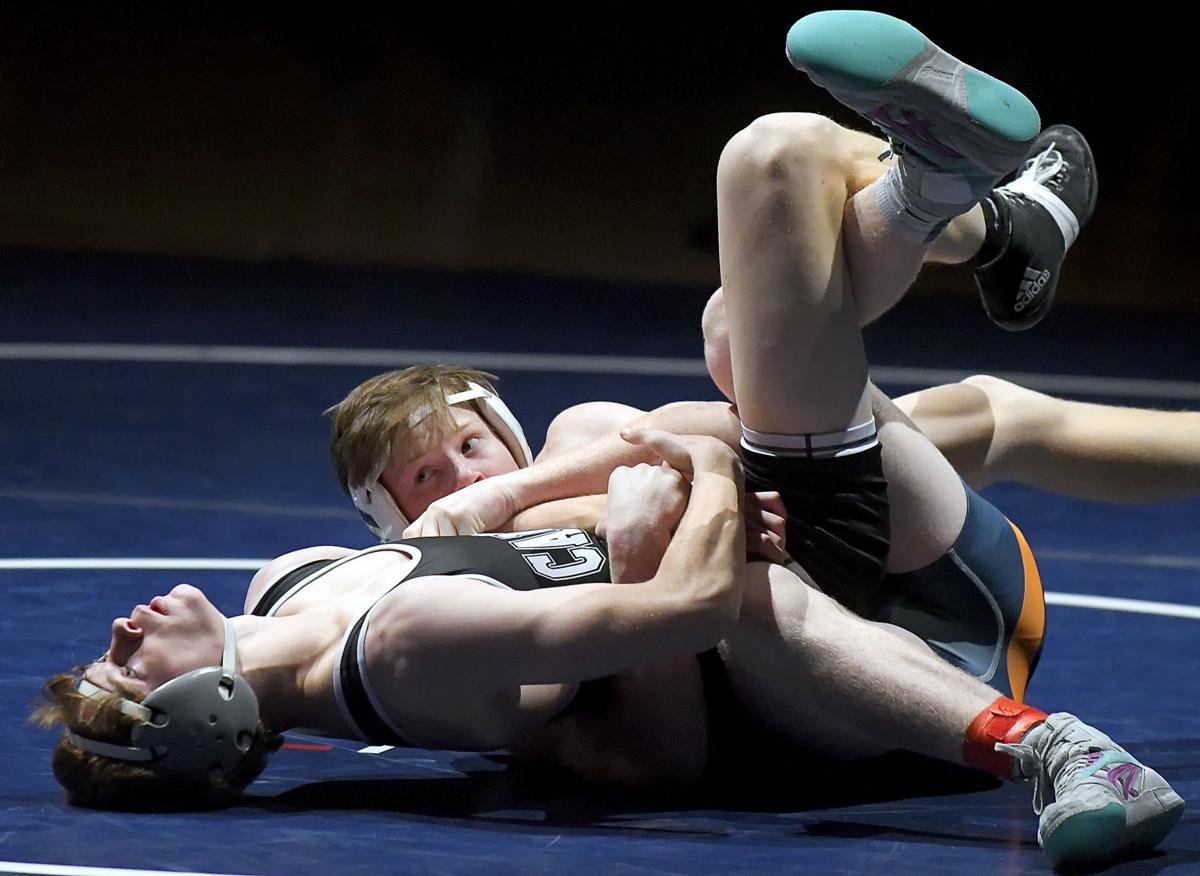 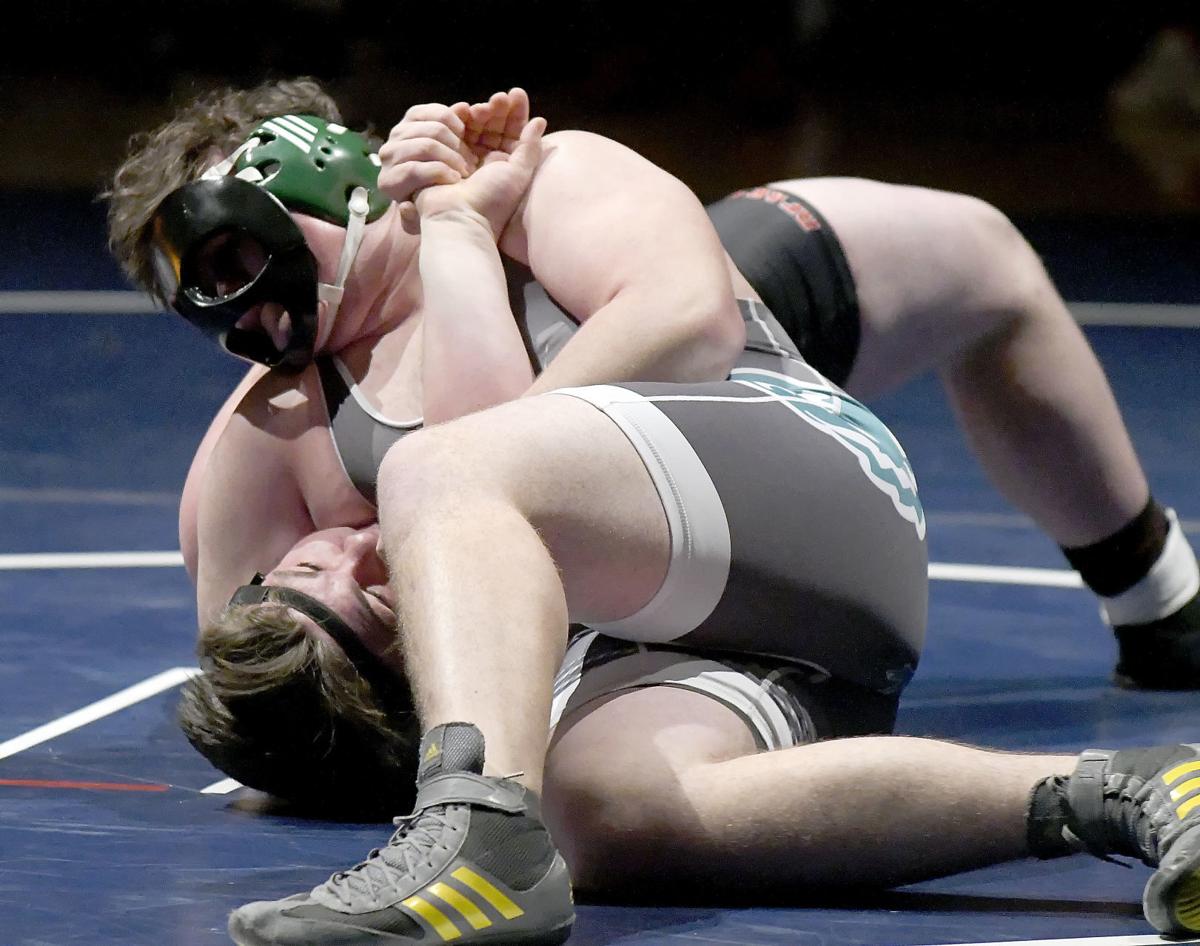 Capturing a second state title in the last three years will likely be a pretty stiff challenge for the Mustangs, but they certainly put themselves in a good position.

Mountain Crest pulled away from Bear River on the second and final day of the 4A Division B tournament last Saturday in Hyrum. The Mustangs racked up an impressive 534.5 points to Bear River’s 457.5, while Stansbury was a very distant third (297.5).

The Mustangs are primed to score a lot of points at the 4A State Championships this weekend because they crowned nine champions at divisionals, had three other finalists, had five athletes claim consolation titles and qualified 21 competitors for state.

“This means a lot to our kids and fans,” MC head coach Jay Tovey said. “We have a great supporting fan base. People love wrestling here. If you wrestle hard, they reward you. Our administration does a great job helping us and giving us what we need to be successful as a program. They, along with Craig Dart, did a phenomenal job running this tournament.”

“Our kids got on a roll early (Saturday) morning,” Tovey said. “We try to out-train everybody we wrestle and then go and have fun when it’s time to compete. That sets us up really well for next weekend. We are excited for the opportunity to compete next week.”

The other Mustangs who punched their ticket to the state tourney are Clay Gunnell (sixth at 145), Zack Scholes (fifth, 170), Walker Hutchinson (fourth, 182) and Andrew Belles (seventh, 195). The top eight placers from each weight class in both divisionals secured their spot at state.

Not only did Mountain Crest sparkle at home, but Green Canyon put together arguably its best tournament of the 2019-20 campaign. The Wolves amassed 184.5 points and finished fifth out of 10 teams.

Green Canyon will be sending 10 grapplers to state, led by heavyweight Garrett Herzog, who had a phenomenal weekend. Herzog pinned each of the top three seeds — including Bear River’s Jeshua Hess and Logan Frasier, 4A’s top two ranked 285-pounders — en title to the title. Herzog was seeded sixth at divisionals.

“Garrett had an amazing tournament,” GC head coach Ryan Webb said. “... He had my vote for outstanding wrestler of the upper weights. We are excited for next week for him.”

It was also a very good weekend for Green Canyon’s Daxton Darley, who upset No. 2 seed Parker Hansen of Tooele — 4A’s third-ranked 106-pounder — in the semifinals and was the runner-up at 106 pounds. Green Canyon’s James Shumway bounced back from a one-point setback to MC’s Cooper Sanders to capture a consolation title at 120 pounds.

“It was a great weekend for us,” Webb said. “We really focused our efforts this weekend on competing all the way through matches. We also talked as a team about not dwelling on losses and controlling what we could control. I thought our kids really battled and I’m super proud of every last one of them.”

Ridgeline capped off a memorable weekend by rallying past Pine View and finishing third out of 11 teams at the other division, which was hosted by Hurricane. The Riverhawks accumulated 306 points, which was 36 fewer than runner-up Desert Hills. Uintah prevailed in convincing fashion with 462.5 points.

The Riverhawks will be sending 15 wrestlers to state. Five of them — Ryan Orduno, Caleb Pirtle, Dylan Nelson, Rhett Gebert and Damien Boehme — placed in the top four of their respective weight class despite not being seeded in the top four. Additionally, fourth-seeded Ronan Melani pinned the No. 1 seed and then secured a narrow 3-2 decision over the No. 2 seed to claim the title at 182 pounds.

“The team wrestled well,” Ridgeline head coach Jarrett Morrill said. “I was especially happy to get four kids in the finals and Ronan Melani, in particular, put together a nice match to be a divisional champion. I was very pleased with how he did. So all in all, it was definitely a successful weekend and a step forward for our program. We reached a new (program) high with 15 state qualifiers.”

Sky View, which finished seventh with 127 points, will be sending seven athletes to state. Bobcat senior Hunter Larsen (220) rolled to a 16-6 victory over 4A’s fourth-ranked 220-pounder to capture his title. Teammate Gino Demuzio was the consolation champ at 120 pounds.

“I think for a young, inexperienced team we have come a long ways and wrestled hard this weekend,” SV head coach Bardett Bagley said. “All the boys have worked hard as it takes everyone in the room to make each other better. I am really impressed with this group, as they have exceeded my expectations from the first of the season. We wrestle a pretty tough schedule and take some lumps during the year, but I think it has paid off with how we wrestled the last two days.”

Logan standout heavyweight Quincy Wildman showed why he was the No. 1 seed as he beat all comers, including 4A’s fifth-ranked 285-pounder by fall in the finals. Every wrestling program in Cache County had at least one divisional champion.