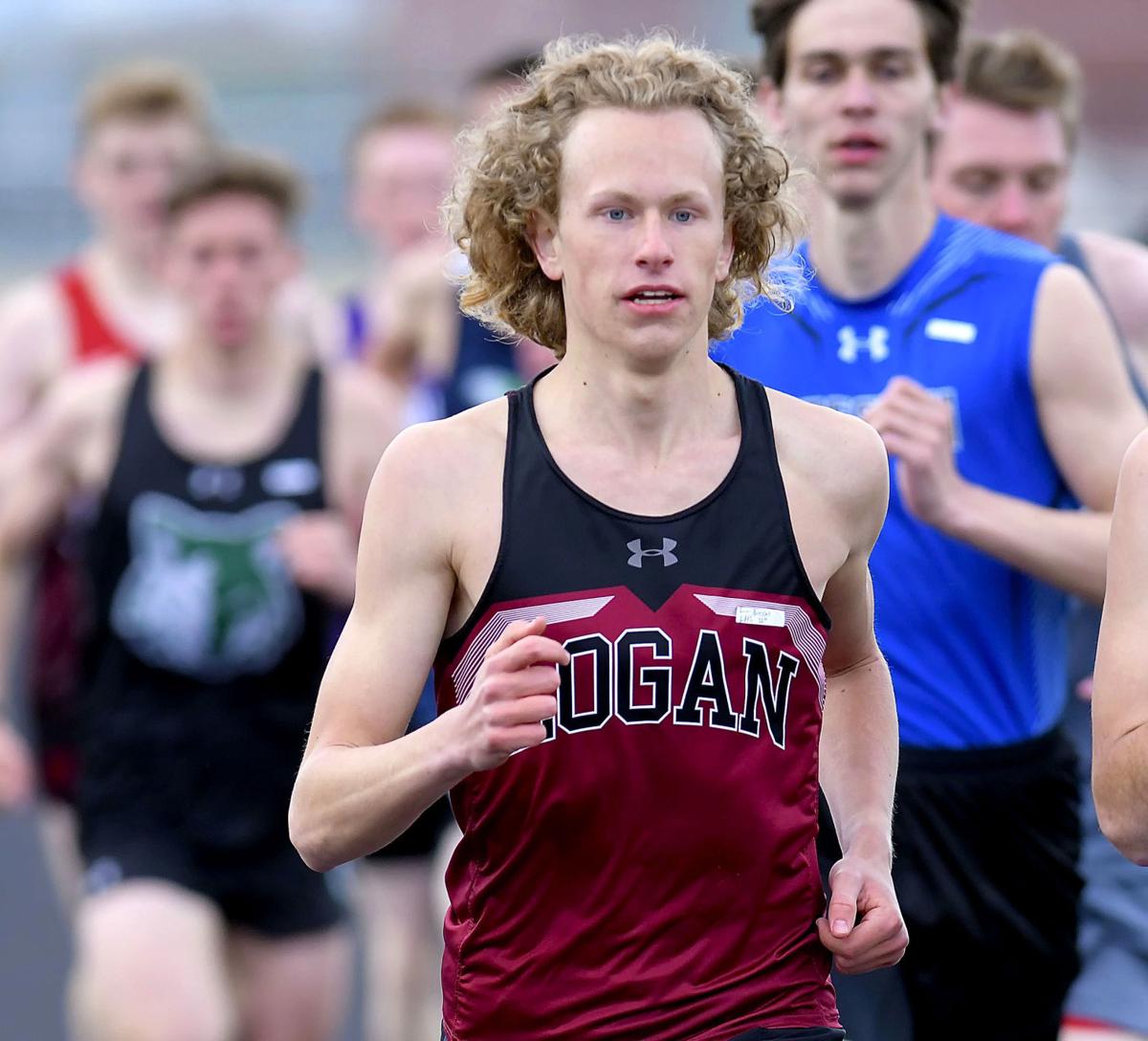 Logan’s Ian Bressel runs the 800 meters at the Cache-Box Invitational in March of 2019. Bressel will run cross country for Hawaii Pacific. 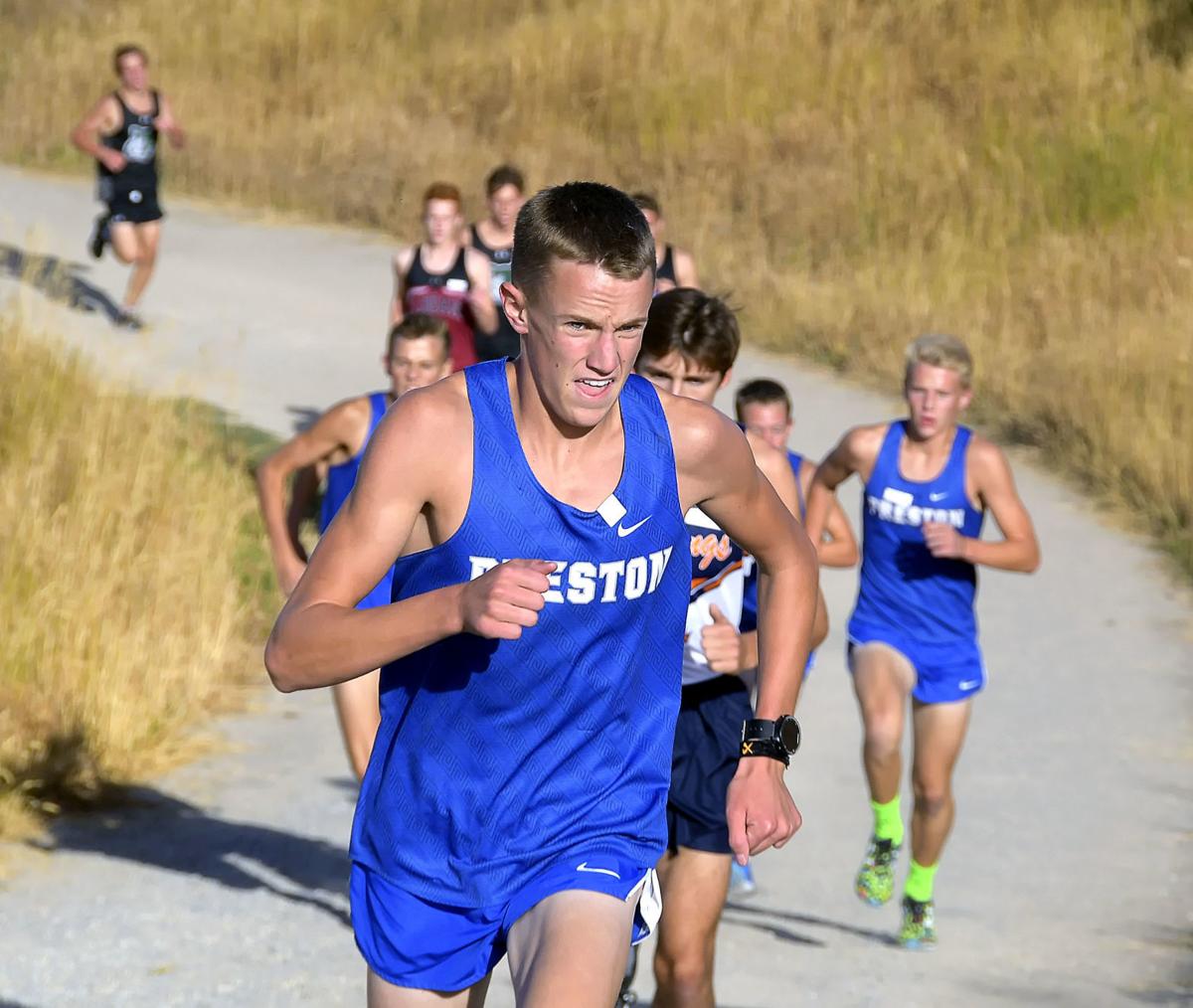 Preston’s Riley Reid leads a group of runners up a hill during the Cache-Box Cross Country Meet in the fall of 2018. Reid will run at the College of Southern Idaho.

Logan’s Ian Bressel runs the 800 meters at the Cache-Box Invitational in March of 2019. Bressel will run cross country for Hawaii Pacific.

Preston’s Riley Reid leads a group of runners up a hill during the Cache-Box Cross Country Meet in the fall of 2018. Reid will run at the College of Southern Idaho.

Local athletes Riley Reid and Ian Bressel are talented and successful cross country runners who were hoping to experience a similar breakthrough during their final high school track & field season.

Unfortunately for both recent graduates, that opportunity was taken away when all spring sports in Utah and Idaho were canceled due to COVID-19. Fortunately for Bressel (Logan) and Reid (Preston), their running careers are not over because both have signed with collegiate programs.

Bressel will compete for Division II program Hawaii Pacific University, while Reid will showcase his talents at the College of Southern Idaho.

“It means everything, honestly,” Bressel said. “It’s such a validation of the four years of work that I put in for it. It’s really cool to see that I really got something out of high school for me, so that’s really nice. Yeah, it means a lot to me.”

Bressel was initially “pretty set” on accepting a scholarship offer to Dixie State University, which will compete at the Division I level for the first time this upcoming academic year. However, the Logan native was able to receive an even better offer from Hawaii Pacific, a private school located in Honolulu.

“I’m not a big fan of cold weather, especially running in cold weather,” Bressel said. “That’s like my biggest turn-off ... so I applied to a bunch of different schools with warmer climates, and I just kind of went out on a limb with Hawaii Pacific because who wouldn’t want to go there, right? And then they hit me back with an academic scholarship and said I had gotten in, so I was like, ‘OK, this is viable.’ So I had my coach (Eric Strand) contact their coach ... and she contacted me, and we went from there.”

The Sharks don’t have a track & field program, so Bressel’s sole focus will be on cross country. Hawaii Pacific placed fifth out of 10 teams at the 2019 PacWest Championships.

Like all cross country athletes transitioning from high school to college, Bressel will need to adjust to longer courses. High school courses are typically three miles or five kilometers in length, while college harriers usually compete on 8K and 10K courses.

It’s an adjustment the son of Megan and Eadric Bressel is looking forward to.

“I think with the training plan that my coach (Jackie Sgambati) has me going through, she’s really helping me adjust as far as getting used to running at a high intensity for a long time,” Bressel said. “And so yeah, I’m really excited for it. I don’t think it will be too much of a leap as long as I follow her training plan, which is very calculated, so if everything goes right, yeah I should be good to go.”

Bressel has been one of Cache Valley’s top prep cross country runners since he was a sophomore. The academic all-state selection won the Region 12 title as a sophomore and was the medalist at the Region 11 Championships as a senior. Bressel covered the 5K course in 15 minutes, 59 seconds as a senior, which was 16 seconds faster than the runner-up.

Bressel put together a solid track & field season as a junior as he was the silver medalist in the region in the 1,600 meters and the bronze medalist in the 800. Nevertheless, Bressel never had a breakout performance at the 4A State Championships, and the coronavirus pandemic prevented him from having the chance to fulfill that objective as a senior.

“It was pretty frustrating,” said Bressel, who is training with Logan’s cross country program over the summer. “I was gunning for maybe a school record in the 1,600, hopefully. That was probably the easiest one to break, but of course that would still be pretty tough. I had high hopes, but at the same time I also knew that I had my future kind of taken care of at the time, so I wasn’t too crushed by it. You know, I think a lot of the guys that were more worried were some sprinters or some track stars who were still really looking for that last season to get an offer. And so I feel like I’m lucky because cross (country) has always been my focus. I think the track guys definitely had it harder, the track-focused runners.”

Likewise, Reid was anticipating having his best track & field season, but everything came to a screeching halt after one meet. The native of Preston was a three-time all-district and all-state performer in cross country, but was never able to replicate a similar level of success during the spring.

“It was quite sad actually because I trained a lot over the winter and was ready to go for track,” Reid said. “And then we never ended up having a season. It was really frustrating.”

Once Reid was able to recover, he shaved nearly two minutes off his 5K time and was one of the best high school runners in the Gem State, regardless of classification. The Idaho State Journal All-Area Boys Cross Country Athlete of the Year has not struggled with shin splints ever since.

“It sucked because I hate it when I know I can run with people and they’re just beating me easily, and I can’t keep up with them,” Reid said. “But then at the end when I finally went to that doctor (in Pocatello, Dr. Belnap) that helped me get rid of them, it was awesome and such a relief.”

The son of MaryAnn and Todd Reid helped propel Preston to some of its best seasons in program history. The Indians finished second behind Idaho Falls at the 4A State Championships in 2018 and 2019, but were among the top teams in all of Idaho. In fact, the Indians would have easily reigned supreme in any other classification Reid’s senior season. Reid did lead Preston to back-to-back district titles to close out his prep career.

Reid referred to his former Preston teammates as family.

“It has been really fun, especially running with our team all of the time,” he said. “We all became really close, like a family, and it was just fun to go out and do well and be friends and not have any hatred towards each other, and always be happy for whoever did well that week.”

As a senior, Reid became Preston’s first-ever district champion at the 4A level. He broke the school’s 5K record at the 10-team district championship meet with his blistering time of 15:30, to boot. A week later, Reid clocked in at 15:39 on the same course en route to placing fourth at the 4A state meet.

Reid also had a scholarship offer to Utah State, but said he needed more NCAA approved classes in order to sign with the Aggies. As a result, he decided to accept an offer from CSI, which is routinely one of the premier junior college programs in the nation.

“I’m pretty excited about it,” said Reid, who plans on competing for USU in the future. “It will be a really awesome opportunity.”

“Riley is going to be a great addition to our team,” CSI head coach Lindsey Anderson said in a press release. “We are excited to have him at CSI and can’t wait to be a part of his continued athletic career.”

Like Bressel, Reid is confident he will be ready for the longer distances in college.

“I’m excited about it,” he said. “I’m a little bit nervous, but I’m pretty excited. I like running farther. I think it will be good.”