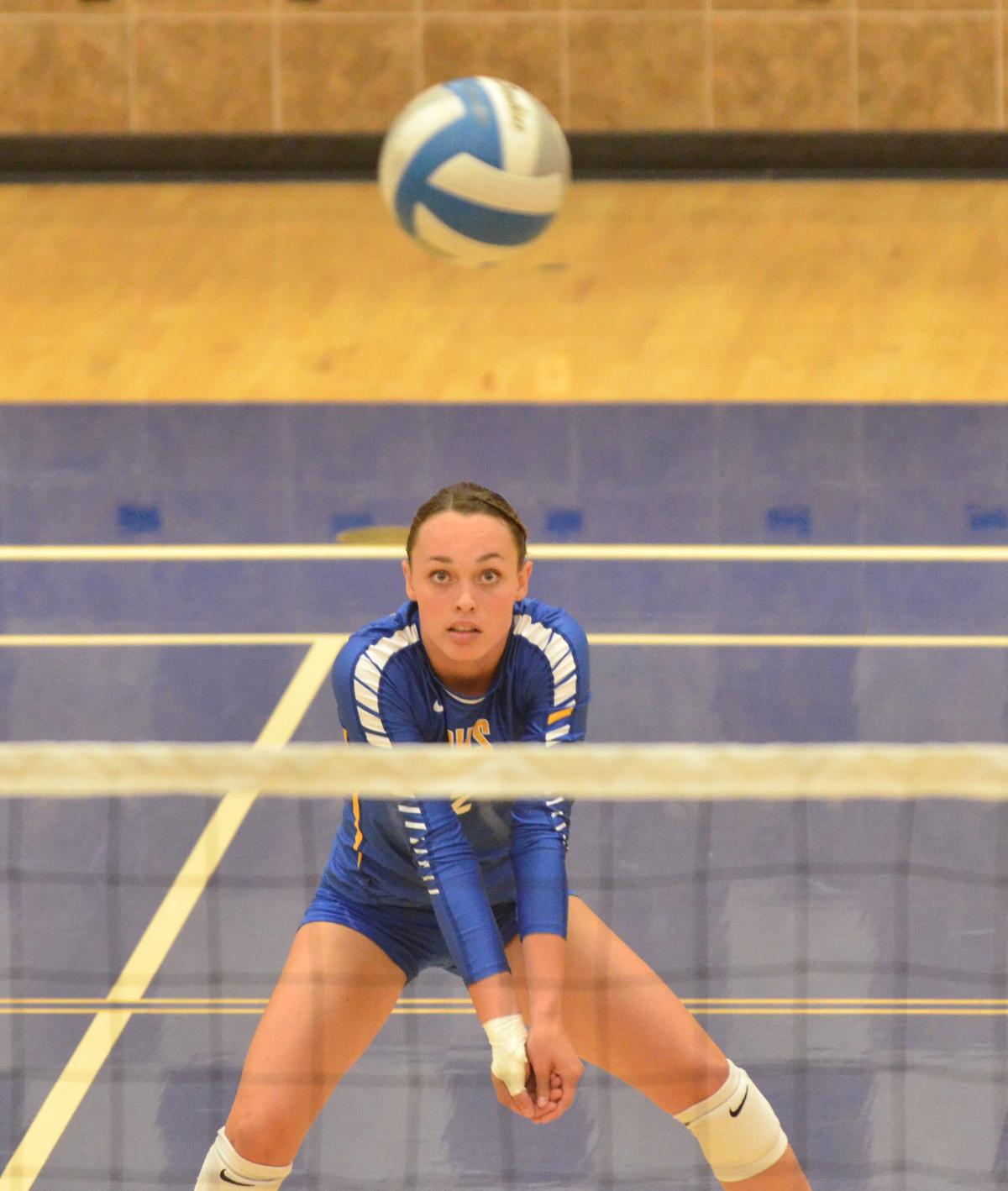 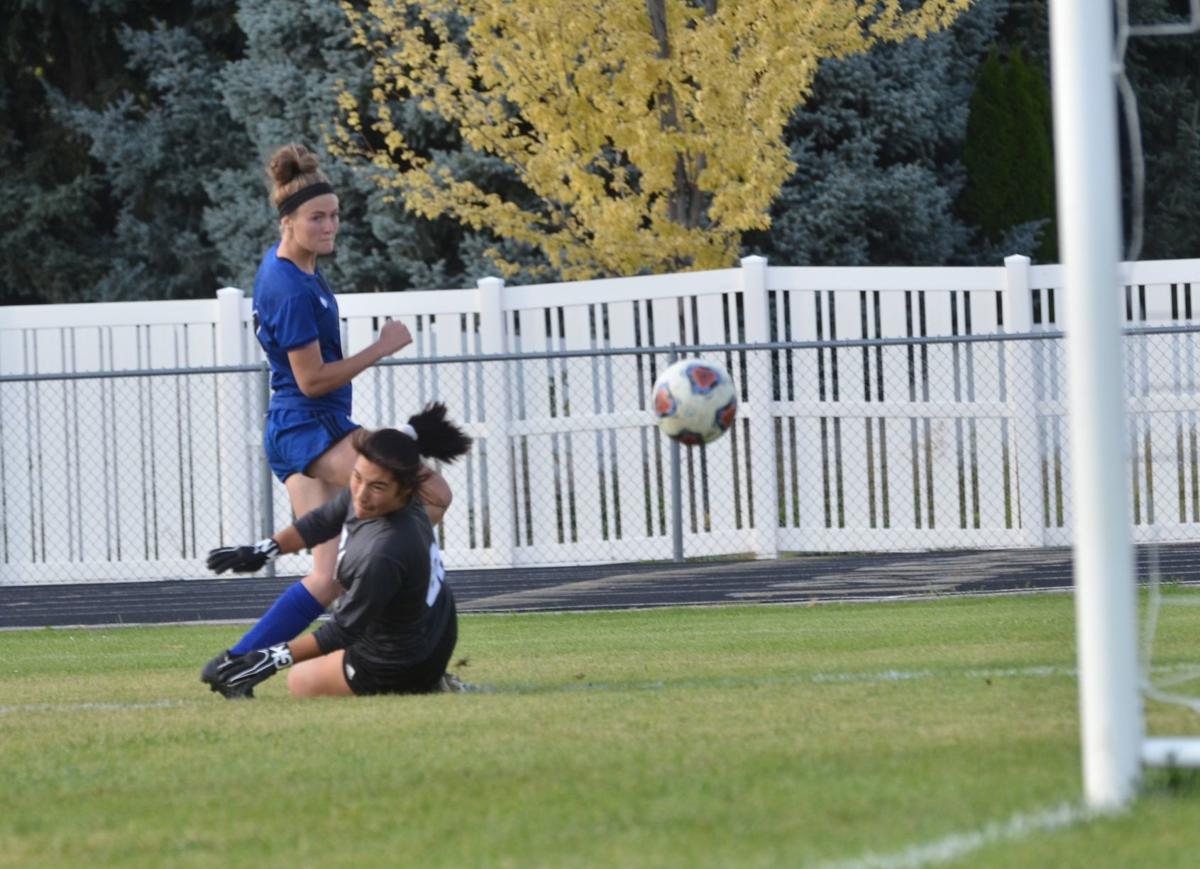 Preston's Millie Chatterton beats the keeper to the ball for a goal against Canyon Ridge. Chatterton has signed to play at Portland Community College.

Preston's Millie Chatterton beats the keeper to the ball for a goal against Canyon Ridge. Chatterton has signed to play at Portland Community College.

Playing sports at the next level wasn’t really a consideration for a pair of recent Preston High School graduates — that is until they were seniors.

However, once Abie Keller and Amillia Chatterton started receiving interest from multiple junior college programs, the opportunity to continue playing the sport they love was too good to pass up. Chatterton has signed with the Portland (Oregon) Community College women’s soccer program, while Keller has finalized her commitment to play volleyball for Everett (Washington) Community College.

“I think it’s an amazing opportunity for me to be able to keep playing something that I love,” Chatterton said. “Before I started thinking of going and playing (in college), the thought of not being able to play was scary. ... It’s going to be a new experience to go out and play with all of these new people, but I think it will be fun.”

Chatterton also considered offers from a couple of other soccer programs in the Northwest Athletic Conference (NWAC), but ultimately felt a bond with Portland CC head coach Kelly Raddar.

“The coach, mostly,” Chatterton said when asked what gave the Panthers the edge over some of their rival schools. “Some of the other coaches that reached out to me, I didn’t really feel like I connected with them, but this coach really connects with his players I feel like. It made a big difference (in my decision).”

The daughter of Emily and Kyle Chatterton was a two-year varsity mainstay for Preston, which finished third in its 10-team district this past fall. Chatterton was primarily a forward for the Indians, although “she’s played pretty much everywhere through her career,” Preston head coach Brandon Lyon said. “She was one that we could play where we needed someone.”

As a senior, the Franklin native scored seven goals and assisted on four others. No. 4 netted the lone goal in Preston’s big win over nemesis Century, and found the back of the net in her side’s 1-1 draw against a very good Pocatello side.

Chatterton was recruited by the Panthers as an attacking midfielder and forward. Portland enjoyed a solid season in 2019 as it went 10-6-3, including 7-2-3 in the NWAC. Two of its athletes on that roster were from the Gem State.

In addition to playing soccer, Chatterton competed as a hurdler on Preston’s track & field team. Her four years at Preston have been memorable.

“I loved it. My team was amazing,” Chatterton said. “We always encouraged each other and, most of the time, worked well as a team. It was a good experience for me. I learned a lot from my teammates and my coaches.”

While at Portland, Chatterton will get the chance to square off against former Preston teammate Alexis Harris, who has inked with NWAC power Peninsula (Washington) College. The signing of Harris was featured in a previous edition of The Herald Journal.

“I think it will be a fun opportunity,” Chatterton said. “Me and Lexi have played on the same team ever since I started playing competitive (soccer when I was 8 or 9), which is probably around the same time she started. And so it will be an interesting experience to play against each other.”

As for Keller, she is looking forward to competing once again, even more so because her final high school softball season was taken away due to COVID-19. The daughter of Babett and Jason Keller was a three-year starting pitcher for the Indians, who didn’t get to play a single game this spring.

“I’m very grateful for this opportunity because getting my softball senior year taken away was really hard for me,” Keller said. “My softball senior team was going to be a good team and the friendships (were deep), and knowing that I couldn’t play on the field again with these girls kind of was a heartbreaker. But it just really made me have a bigger mindset on how fast things can be taken away, so when college (volleyball) coaches kind of started reaching out to me, I realized there are more opportunities outside of high school ball ... and I just took that opportunity to talk to those coaches and see what they could see in me.”

Keller likely would have received some opportunities to play junior college softball had she pursued it, but felt like volleyball was her stronger sport. The Preston native was a two-year starter and three-year varsity contributor for Preston’s volleyball program, which finished fourth in its 10-team district during the 2019 campaign.

Keller split time as an outside hitter and defensive specialist en route to garnering third-team all-district honors for the Indians. As a senior, No. 2 ranked second on the team in kills (117) and digs (190), and received serve 256 times, which was also second on the squad. Keller also contributed with 17 aces in 66 sets.

She recorded a double-double (11 kills, 18 digs) in a five-set match against Wood River. Keller also finished with 11 kills against Minico and accumulated 17 or 18 digs in matches against Twin Falls and Pocatello. Keller earned a spot on the HJ All-Valley honorable mention team last fall.

“It’s been really fun. I’ve had my ups and downs with a lot of my teammates, including my coaches, and it just has made my grow a lot because I got to learn new things from different coaches,” said Keller, who went on to praise Preston head coach Karaska Haskell. “As many people know, I kind of injured myself at the beginning of my junior year and I was out for some of my junior year, and I wasn’t going to come back and play because I didn’t feel like I was at my full potential. But I had coaches that really pushed me to come back, especially my senior year because I struggled getting along with some of my teammates, (although) I love them all dearly. But I really grew as an athlete and as a teammate, and just as a person in general because I just learned a lot of new things at Preston.”

Keller was also recruited by smaller schools in Oregon, Montana, Washington and Virginia, but liked the feel of Everett better.

“It came down to the fact that I felt more comfortable with the coach and possibilities that Everett has to offer over any of the other schools,” she told The Preston Citizen. “While attending Everett, I will be able to experience so many new things. One of the bigger things that will change will be going from a small town to a big city.”

Keller was recruited by the Trojans as a defensive specialist and libero, but said she might also have the chance to showcase her skills as a hitter. Everett, which is located about 30 miles north of Seattle, went 6-20 a year ago, including 2-10 in the NWAC. The Trojans were a very young team last fall as they only had two sophomores.

In addition to volleyball and softball, Keller also competed on Preston’s district title-winning cheer squad as a senior. Cheer is sanctioned by the Idaho High School Activities Association. The Indians were primed to do well at the state competition, but it was canceled due to the coronavirus pandemic. Preston placed third in three of the six categories at the 2019 4A State Cheer Competition.