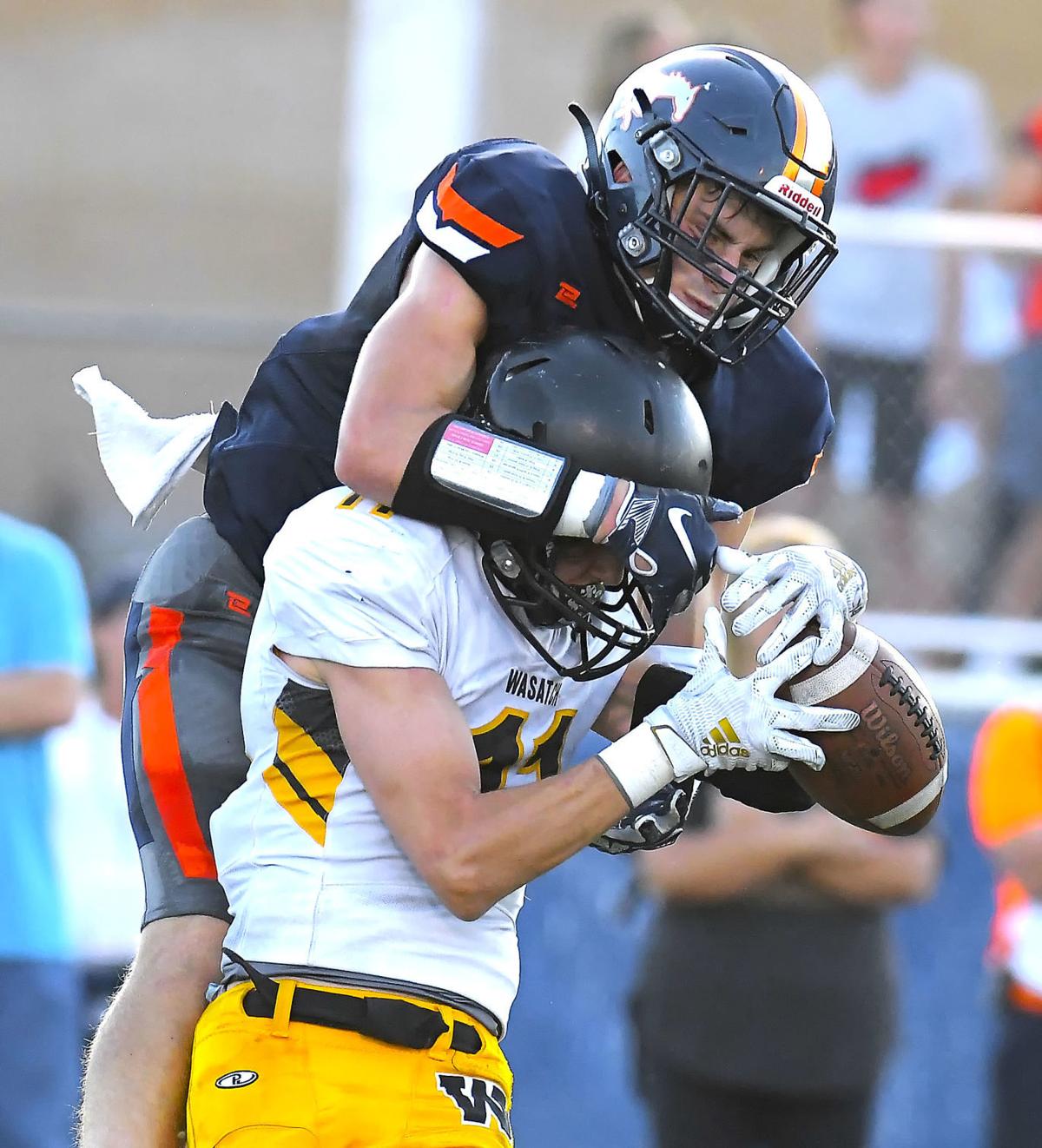 Mountain Crest’s Trae Fuller breaks up a pass intended for Wasatch’s Damien Skiby on Friday in Hyrum. To view more photos from the game, go to hjnews.com. 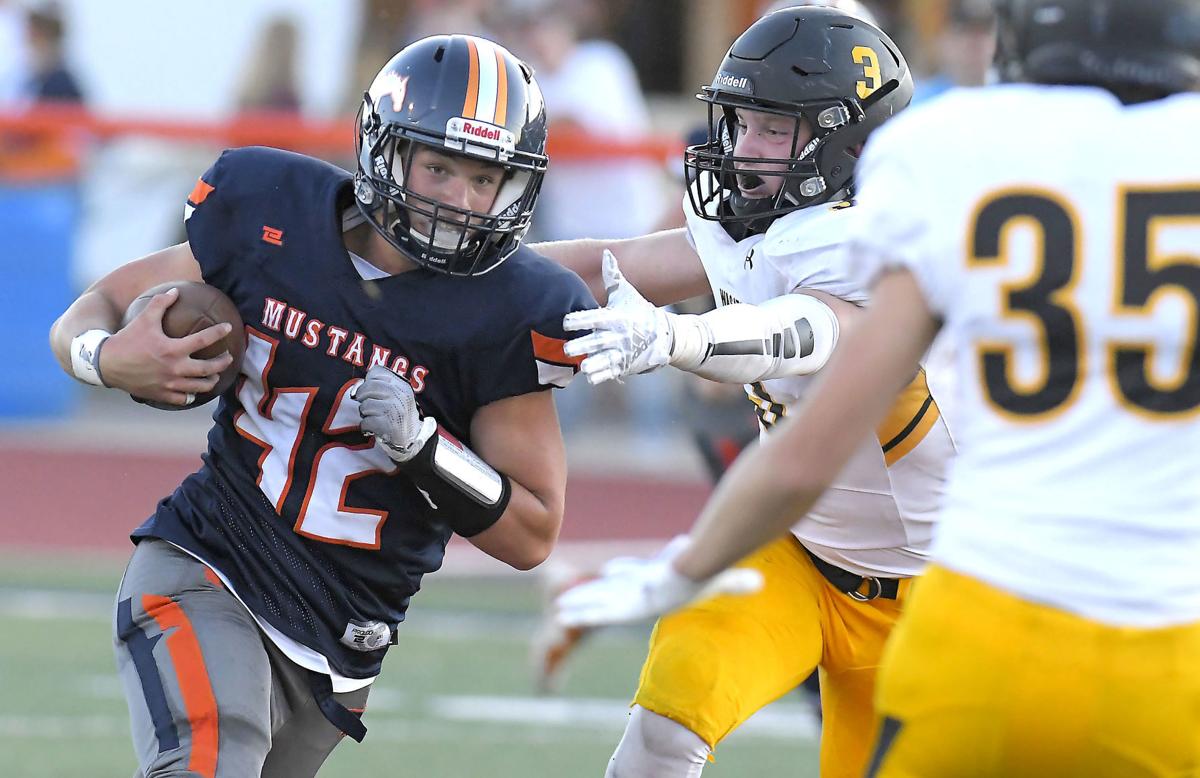 Mountain Crest’s Trae Fuller breaks up a pass intended for Wasatch’s Damien Skiby on Friday in Hyrum. To view more photos from the game, go to hjnews.com.

HYRUM — Mountain Crest fell to 0-2 on the year, losing its home opener to Wasatch, 17-8, Friday in a penalty-ridden game.

The Mustangs committed 10 penalties (that were enforced), losing 96 yards in the process. Wasatch (1-1) had eight flags thrown on them, but for just 61 lost yards. Following the game, a frustrated Jason Lee, MC’s head coach, cited the inordinate number of miscues as one of two major factors in his team’s loss.

“Too many penalties, too many turnovers,” Lee said. “We will not win ballgames if we turn the ball over and have penalties like that.”

Turnovers bit Mountain Crest in the rear almost immediately. After being held to a three and out on their first possession, Mustangs’ punter Walker Hutchinson dropped the snap and was tackled in the backfield. The Wasps, who went three and out on their own opening possession, took the gift and the short field and converted it into a 1-yard touchdown run by quarterback Parker Quinton.

That opening touchdown with just over three minutes remaining in the first quarter turned out to be the only score from either side in the first half. Outside of Wasatch’s TD drive, the two teams combined for 150 total yards in the opening two quarters.

Mountain Crest’s offense appeared to get going late in the second quarter. In the final six minutes of the half, senior quarterback Tadon Burbank completed 6 of 8 passes for 63 yards — split between two drives. Unfortunately for the Mustangs, while they made it inside the Wasatch 25 on one drive and inside the 40 on the other, both ended with turnovers.

The first ended on a botched hand-off between Burbank and Elijah Jackson that wound up in the hands of Wasatch. The latter drive was cut short when a deep pass from Burbank got picked off by the Wasps’ star wide receiver/corner Damien Skiby.

Once they got to the second half, the Mustangs cut back on the turnovers. They even took the lead on a 55-yard touchdown run by Hutchinson (plus a two-point conversion) on their first possession after halftime. But past that, penalties crippled the MC offense.

Wasatch’s response to Mountain Crest taking the lead was delayed thanks to an excellent interception by Mason Baldwin that ended the Wasps’ march just before it reached the red zone. But MC promptly went three and out and punted the ball back to Wasatch.

On the following drive, the Mustangs gave up a 26-yard scramble, only making things worse by committing a 15-yard personal foul penalty. That set up what became the game-winning touchdown by Zak Thacker on a powerful 9-yard run.

Though down six points, the Mustangs had plenty of time and chances. Their offense just couldn’t capture the momentum from Hutchinson’s big run.

Quinton ended up running for 116 yards and the one TD on 16 carries throughout the game, most of it in the second half. Several times he scrambled on drop backs, but on others he masterfully fooled the Mustang defense on read option plays. Lee had his own take on Quinton’s great running.

Mountain Crest had a hard time putting together a comeback largely because they had so little time. Wasatch took the lead for good with 2:33 left in the third quarter. The visitors had their next offensive possession start right at the beginning of the fourth quarter. That drive ended up lasting more than half the remainder of the game, 6:11, and was extended by penalties.

Twice the Mustangs put the Wasps in third-and-long situations, but on both occasions, the defense committed pass interference penalties, bailing out their opponents. Wasatch turned that drive into a 24-yard field goal that iced the game.