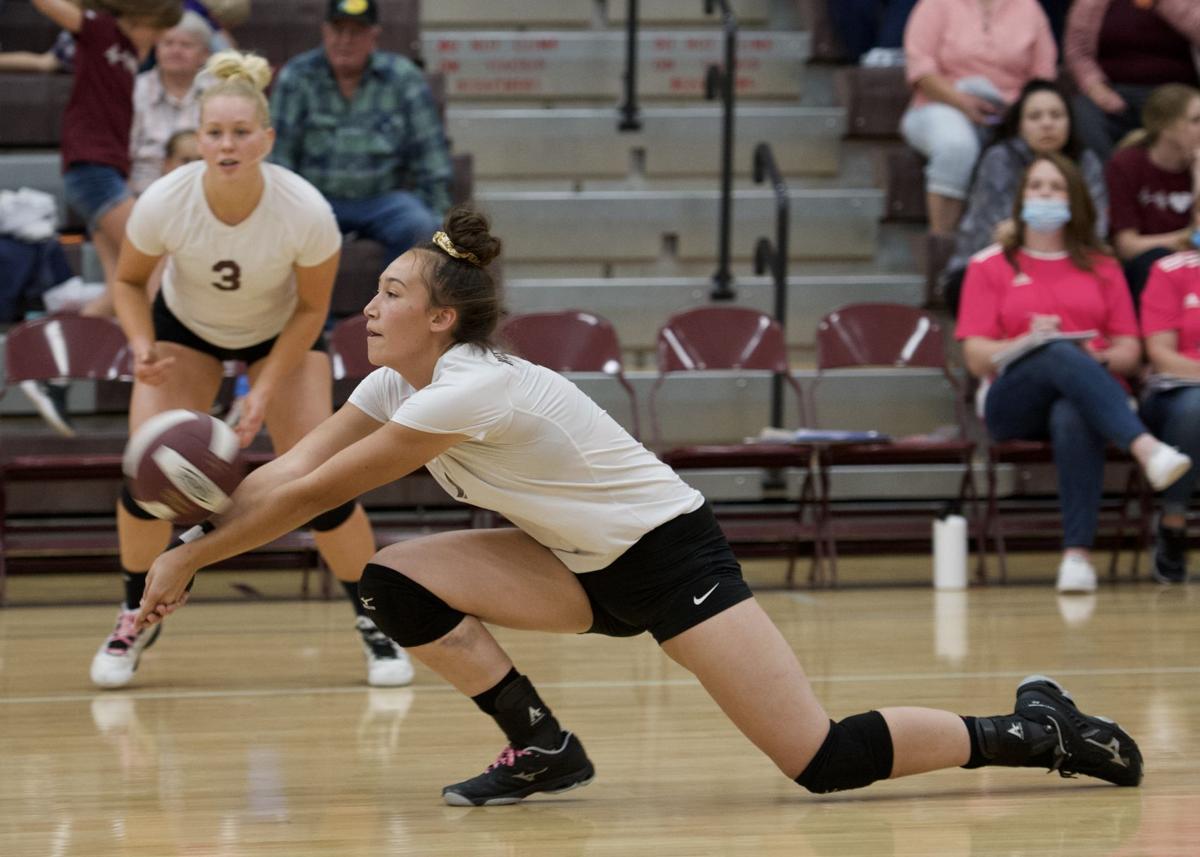 West Side’s Jesse Mariscal digs a ball in a district volleyball match against Bear Lake earlier this season. The Pirates and Bears shared the regular season district title, but West Side will be the top seed in the district tournament. 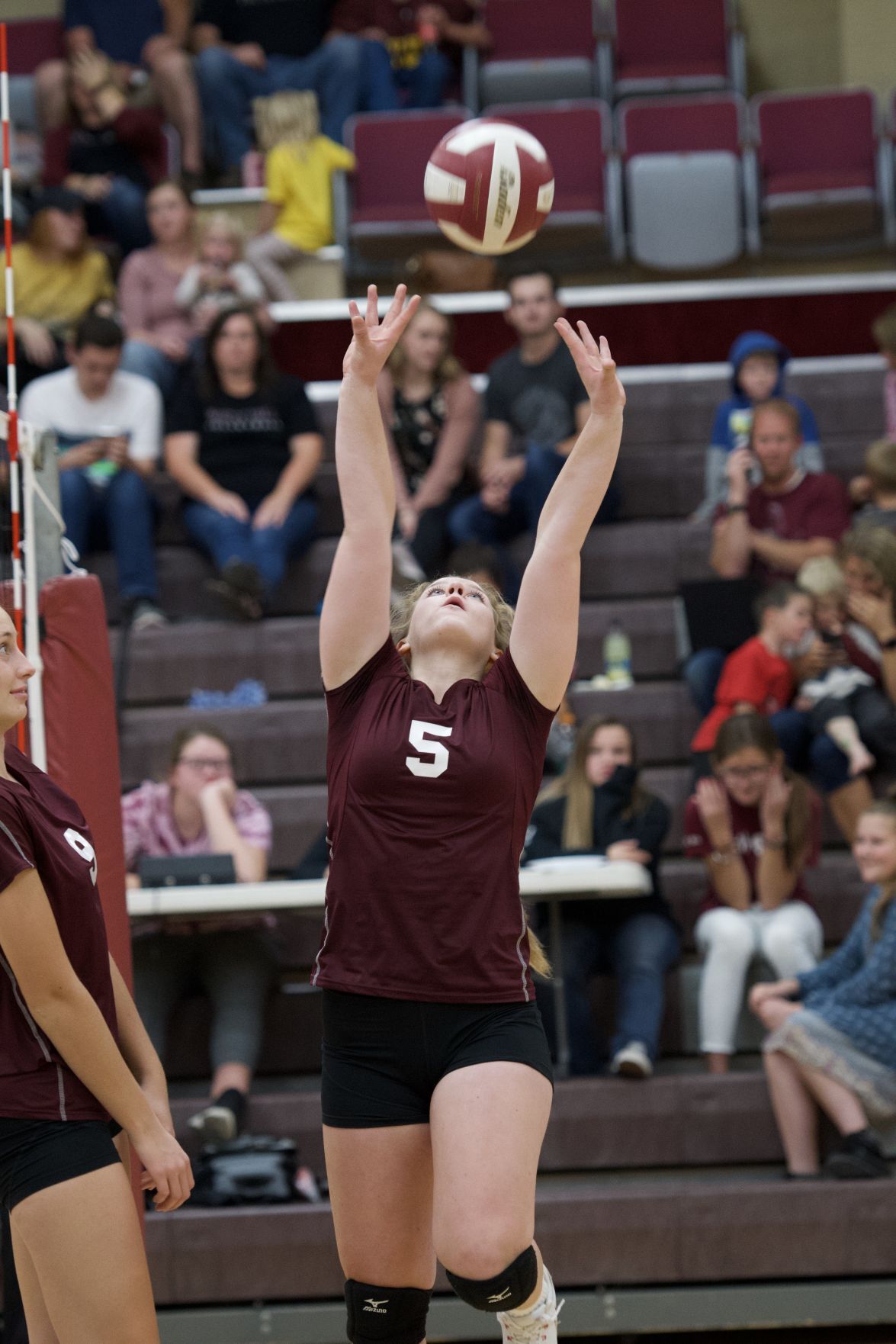 West Side's Laney Bingham sets the ball in a match earlier this season. Bingham and the Pirates have only lost two matches this season.

West Side’s Jesse Mariscal digs a ball in a district volleyball match against Bear Lake earlier this season. The Pirates and Bears shared the regular season district title, but West Side will be the top seed in the district tournament.

West Side's Laney Bingham sets the ball in a match earlier this season. Bingham and the Pirates have only lost two matches this season.

DAYTON — It’s been a while since West Side has earned the right to host the volleyball district tournament.

But that’s exactly what the Pirates will be doing Saturday. West Side wrapped up a share of the regular season district title Thursday on Senior Night with a sweep of rival Malad, 25-18, 25-23, 25-14.

On Wednesday, West Side won at Soda Springs, 25-17, 25-15, 25-12 by playing well at the net and serving lights out. The Pirates finished in a tie with Bear Lake, but won the tie-breaker because of their victory over Preston this season.

“With our record in district being the same as Bear Lake, we went to common opponents,” WS head coach Melinda Royer said. “We beat Preston, and they (Bears) had lost to Preston. So we get to host, which is going to be really nice”

It was especially sweet for the coach. She began coaching the seniors when they were in the eighth grade, was their freshman coach and took over as the varsity coach when they were sophomores. Seniors Sydnie Thain, TyLene Royer, Kajsia Fuller and Emma Mariscal were honored before the match Thursday.

“I’m really proud of all four seniors,” coach Royer said. “They have been stuck with me for a long time. They have really progressed well and are great girls.”

West Side has been putting together a special season. The Pirates have only lost two matches all season. They don’t want to get ahead of themselves as winning the district tournament and the automatic berth to the state tournament is the next goal, but this team does want to make some noise at state.

“We are so ready for the district tournament,” said Fuller, who had six kills and a block in the win Thursday. “We have bonded well as a team. We were a family right from the beginning. We all hold each other accountable and expect the best of each other and ourselves. That helps us stay grounded.”

“They all really played well,” coach Royer said. “They served well, they passed well, they played the net well. They definitely were aggressive at the net.”

West Side did serve up six aces on the night. Junior Madalyn Barzee had three aces, while sophomore Laney Beckstead had two.

Jessica Mariscal heated up early as she had four straight kills to spark a 5-0 surge early in the opening set. The junior had six kills in the first set as the hosts never trailed after giving up the first point. Emma Mariscal finished it off with a kill.

The second set was much tighter as there were seven ties and three lead changes. It was 23-23 when West Side called a timeout as Malad freshman Hallie Horsley got hot with nine kills in the set. She had 14 kills for the match.

A kill by Emma Mariscal out of the timeout gave the Pirates the lead for good. The senior then once again finished the set by winning a joust.

The third set was all Pirates. With Jessica Mariscal serving, the hosts reeled off nine straight points to take a commanding 10-1 lead. West Side built a 21-6 advantage after a 6-0 run with Barzee serving. Kajsia Fuller swatted home the final point on a kill that kissed the back line.

“We have all the pieces to win at state, we’ve just got to go put it together now,” Kajsia Fuller said.

West Side begins the district tournament with a match against fifth-seeded Aberdeen at 2 p.m. Saturday. With a win, the Pirates would not play again until Wednesday.

“I feel like we are peaking at the right time,” coach Royer said. “They have really picked up on the skills we have been working on. They are doing great.”

Melanie Hiatt led the Bobcats with 16 kills and hitting .364. She also had seven digs a block. Jenna Gibbons did a little bit of everything for Sky View with two aces, six kills while hitting .417, had four blocks and five digs. Haley McUne was also well rounded with four aces, 12 kills, two blocks and 10 digs. Kaytlin Smart added nine kills and six blocks.