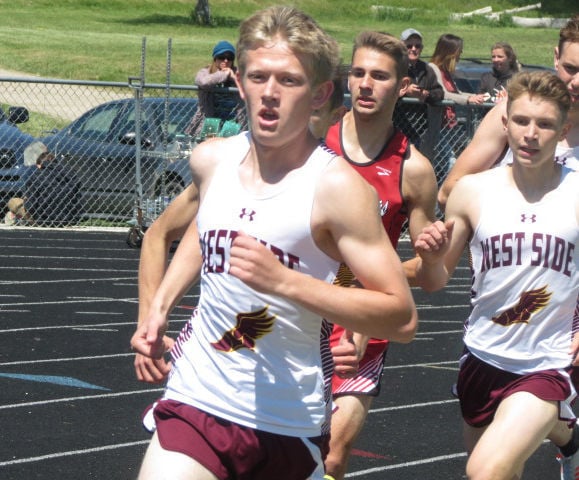 West Side’s Jacob Moffat leads the field in the 800 meters during the 2A Fifth District track & field meet on Friday in Dayton. 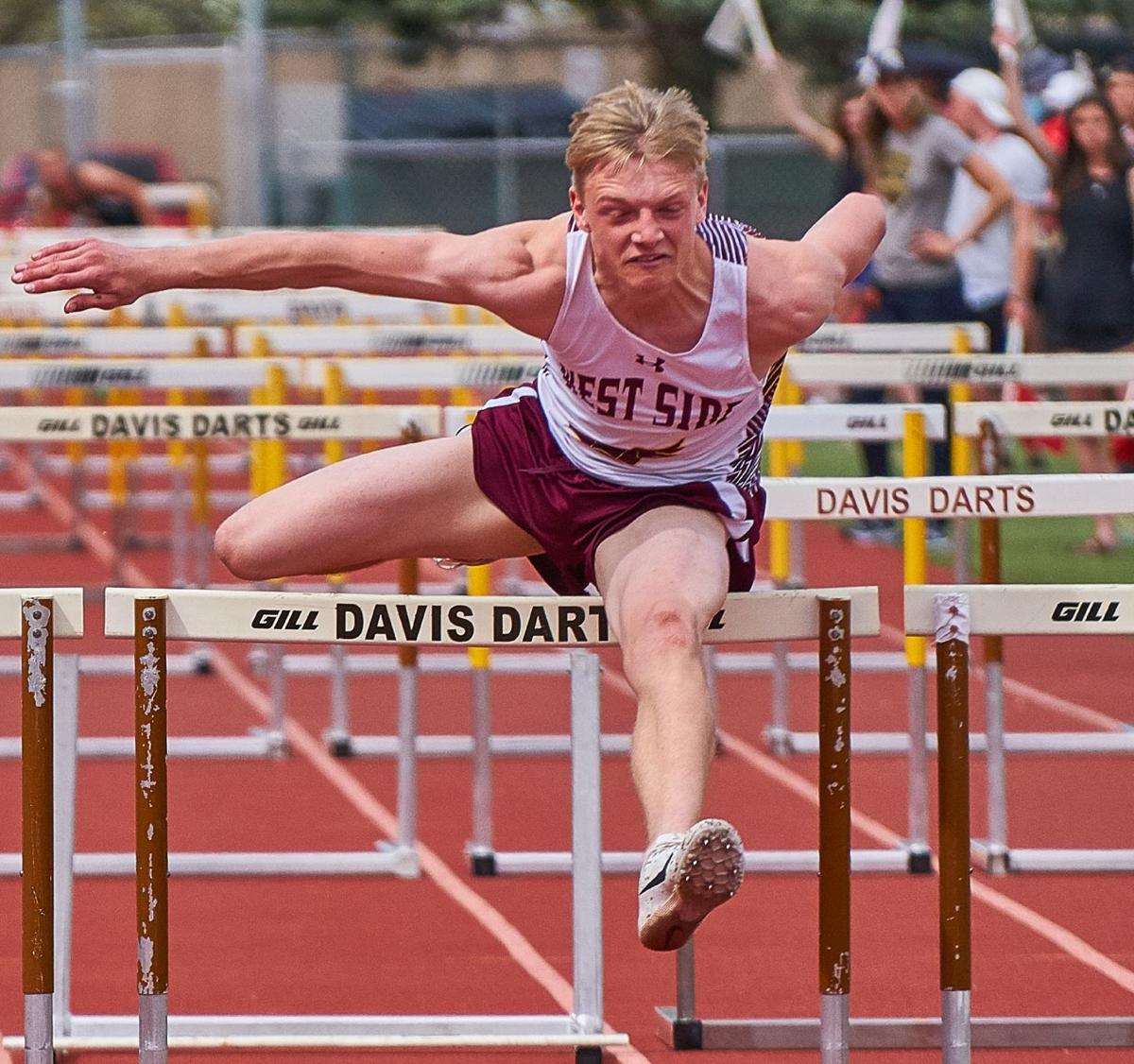 West Side's Cyrus Rindlisbacher won all four of his events at the 2A Fifth District track & field meet, which concluded Friday in Dayton.

West Side’s Jacob Moffat leads the field in the 800 meters during the 2A Fifth District track & field meet on Friday in Dayton.

West Side's Cyrus Rindlisbacher won all four of his events at the 2A Fifth District track & field meet, which concluded Friday in Dayton.

DAYTON — For the second straight year, it came down to the final event of the meet.

Just like last spring, the West Side girls track & field team did enough to hold off Soda Springs for the 2A Fifth District title.

The Lady Pirates have now captured nine straight district championships after edging the Cardinals by the slightest of margins Friday afternoon at Lyle S. Henderson Field. West Side racked up 93 points in a very competitive girls field, which was 0.5 more than Soda Springs. Bear Lake was third with 78 points, followed by Aberdeen (68.5) and Malad (36).

Conversely, the West Side boys dominated after having their 10-year winning streak snapped by Aberdeen in 2018. The Pirates claimed 10 of the 18 event titles en route to amassing 157 points. Aberdeen was second with 101, followed by Soda Springs (63), Bear Lake (37) and Malad (16).

“I think it was here on our home track the first time that we won both (boys and girls titles) nine years ago or whatever that was,” WS head coach Tyson Moser said. “So yeah, it was pretty cool to do it again. And the girls, every girl that chipped in a point or even half of a point helped us pull it off. It was exciting.”

The Soda Springs girls reigned supreme in the final event of the meet, the 4x400-meter relay, so West Side had to finish second to keep its winning streak alive. The foursome of Ellie Stegelmeier, Ashlynn Willis, Sienna Fuller and Madalyn Barzee was able to do just that.

That clutch performance capped off a solid two-day meet for Stegelmeier, who barely missed securing gold medals in both hurdles races. The senior won the 100 hurdles with a personal record time of 16.82 seconds, ran a life-time best 48.33 in placing second in the 300 hurdles and was the bronze medalist in the 100.

“I feel like I did really well,” said Stegelmeier, who praised her coaches and teammates for making her a better competitor. “There’s always room for improvement, which I’m hoping for by state. ... But I feel like we did really well, especially our 4x400, we did really well. We pushed it, so I was proud of my girls for getting that (silver medal). Every little point counted.”

The Lady Pirates only emerged victorious in a pair of events, but were the runner-ups in seven others. West Side’s other champion on the girls side was Lilia Ebanez, who made it four consecutive gold medals in the pole vault.

Ebanez, who completed legs on two runner-up relay squads, vaulted over the bar at 8 feet, 6 inches. The senior has cleared 9-6 a few times in meets and 10-0 in practice, and is aiming for a 10-6 clearance at the 2A State Championships.

“It feels super good,” Ebanez said. “I wish I would have done better (height wise) in pole vault of course, but we’ve still got state and I’m very excited for state. ... I’m excited and I’m ready. This whole next week is just going to be a week of hard practices for me.”

It was a gratifying two days of competition for West Side’s top two boys. Hurdler Cyrus Rindlisbacher and distance runner Jacob Moffat left the meet with four gold medals apiece. Both athletes will be legitimate title contenders at state.

“My teammate Cyrus and I have gone to all of the big meets together, and us both getting our golds is really fun because we’ve worked for it together,” said Moffat, who is ranked first in 2A in the 800 (1:59.70) and 3,200 (9:58). “Ever since football and cross country was over, we did winter indoor track and we just ran all winter, so if we didn’t win it would have been disappointing because of how hard we’ve worked.”

Rindlisbacher finished off a memorable meet by anchoring West Side’s 4x400 squad to a thrilling come-from-behind victory. The senior powered past Aberdeen standout Hulizes Ortiz — the reigning 2A bronze medalist in the open 400 — down the final straightaway en route to a 49.6 split. The foursome of Rindlisbacher, Dillon Robinson, Gideon Beutler and Josh Reeder clocked in at 3:31.70.

“It felt really, really good,” Rindlisbacher said. “I mean, it’s a team effort, though. It wasn’t just me, it was our whole team that did it. They put me in a position where I could do my best and get right behind him, and just outsprint him to the end.”

It was another stunning performance by Rindlisbacher in the 110 hurdles as he lowered his own school record to 14.54. He is now ranked fourth in the Gem State, regardless of classification. The senior, who is ranked first in 2A in the 110 hurdles and 400 (50.44), also beat all comers in the 300 hurdles (40.32) and gave the Pirates the lead for good in the 4x100.

The West Side boys earned the right to stand on the top spot of the podium in all four relays. The 4x100 relay team broke 45 seconds for the first time this season and was comprised of Rindlisbacher, Cook, Ward and Bryler Shurtliff (44.71). Cook, Robinson, Shurtliff and Brock Gittins teamed up to win the 4x200 in 1:34.01.

West Side’s other individual champion was Ward, who cleared 13-0 for the first time in the pole vault. The senior now has his sight set on breaking the school record vault of 13-9 next weekend.

“Well, I wasn’t supposed to win,” Ward said. “(Aberdeen’s Payton) Foster had beaten me all year long pretty handily, but I came into the meet focused and ready to go. And good things happen when you’re ready and when you’re focused, and so it felt really good. I feel like I can get higher, though, so we’ll see what happens at state next week.”

Other West Side competitors who finished third in an individual event were Keller (long jump), Shurtliff (high jump), Jack Moser (discus), Willis (800), Noreen (1,600) and Cook (200). Easton Henderson was the bronze medalist in both hurdles races, while fellow Pirates Alyssa Crouch and Kajsa Fuller tied for the No. 3 position in the high jump. Willis broke the 2:30 barrier for the first time in the 800.

The top three placers in each individual event, plus each first-place relay team, automatically qualified for the 2A meet. The Pirates should find out by Sunday what wildcard bids they will receive.