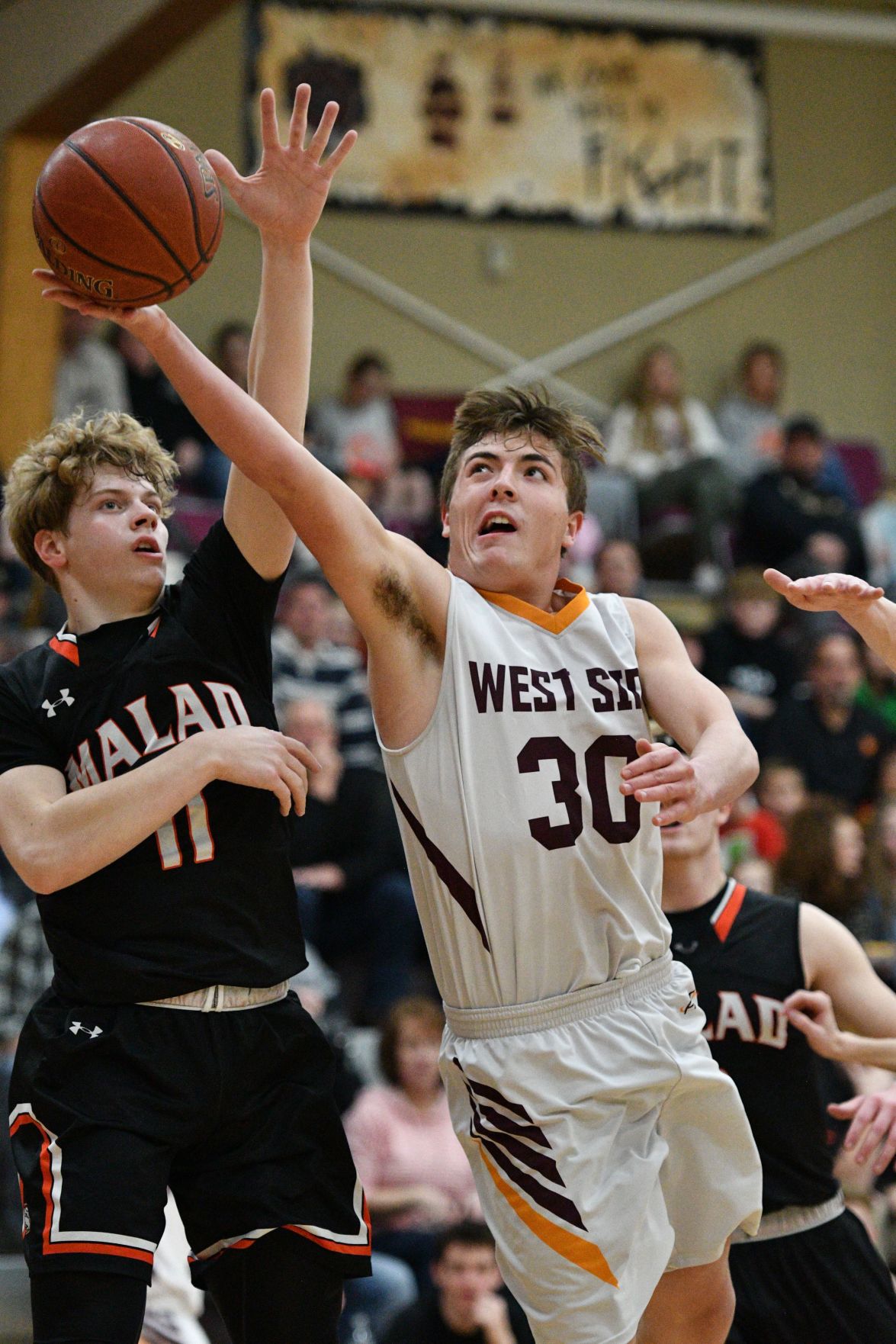 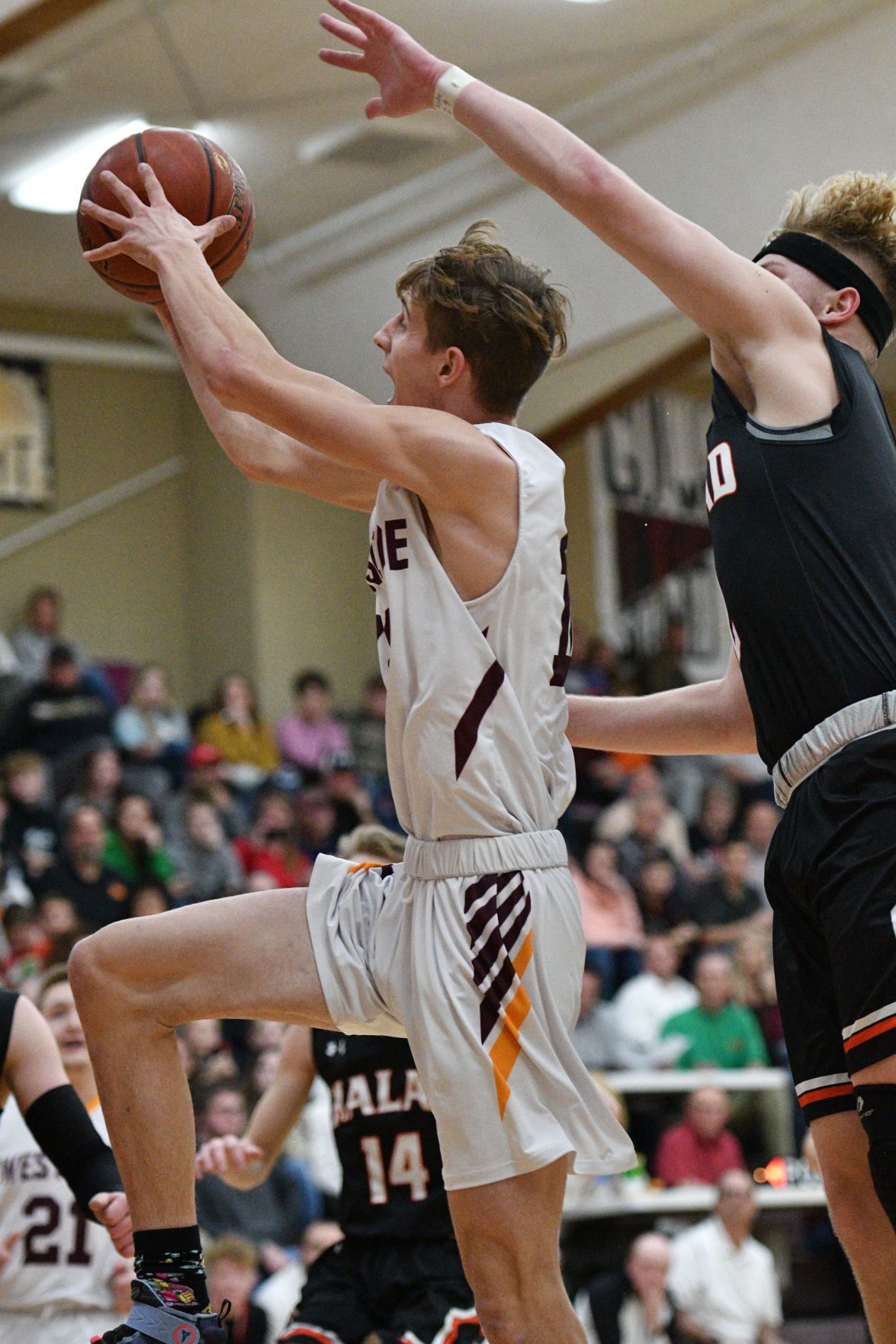 West Side's Bryler Shurtliff takes the ball to the basket in his team's 67-46 victory over Malad on Thursday night in Dayton.

West Side's Bryler Shurtliff takes the ball to the basket in his team's 67-46 victory over Malad on Thursday night in Dayton.

DAYTON — It was a pretty shaky end of the second quarter for the Pirates, but it did not shake their confidence.

Instead, West Side absolutely sparkled on both ends of the court in the third quarter, outscoring Malad 20-9 en route to a gratifying 67-46 victory over the Dragons in a 2A Fifth District boys basketball game on Thursday night at E.L. Bud Elwell Sports Center.

“That was by far my favorite time in the game,” WS standout post player Isaac Frankman said. “It was just nice to be able to work together as a team and have everyone making plays.”

It was a balanced team effort for the Pirates in their game-changing third quarter. Five different West Side players scored, Blaze Brown threaded the needle for a couple of spectacular assists, and Connor Nielsen made three huge defensive plays.

It was exactly the start to the second half West Side head coach Tyler Brown was hoping for after Malad scored five straight points late in the second quarter to pare its halftime deficit to 30-28. The Pirates were seemingly in control after they went on a 8-0 run to seize a 30-23 lead in a back-and-forth opening half.

Coach Brown was also happy to see Connor Nielsen get on track after the halftime break. No. 5 didn’t score in the first two quarters, but netted nine points in the second half, blocked a pair of shots in the third quarter and forced a jumpball that resulted in a Malad turnover. Adam Headworth also gave the Pirates a huge lift in the third quarter, especially on the defensive end.

“If he can play that way the whole time, we’re going to be tough (to beat) because he’s long, he’s athletic,” coach Brown said of Nielsen. “... And plus if he can play defense like that and then get a couple of offensive boards, that’s huge for our team.”

The Pirates (13-3, 4-0 district), winners of 12 of their last 13 contests, scored the first eight points of the third quarter to extend their lead to 38-28. The Dragons (10-5, 3-1), who had their seven-game winning streak terminated, never got closer than seven points the rest of the way. More than four minutes had elapsed off the clock before Malad scored in the third quarter.

West Side maintained its intensity in the fourth quarter and never let its advantage drop below 13 points. It was obvious this was going to be the Pirates’ night when Bryler Shurtliff converted on a four-point play to give the hosts a 61-44 lead. Shurtliff was fouled shooting a 3-pointer that bounced on the rim twice before falling through.

“I thought I was just going to get three free throws, but when it bounced in it was game over to me,” said Shurtliff, who finished with a game-high 21 points. “I was ready to go celebrate, but we still played well (after that) and walked off with a win.”

In addition to Shurtliff, the Pirates got another solid performance from Frankman, who continues to excel as an undersized post player. The 6-foot-2 senior makes up for his lack of height with some crafty post moves, a quick first step, nimble footwork and a physical presence around the rim.

“I just try to do whatever I can to help my team win, whether that’s passing it out to Connor for a 3 or trying to work on my post moves,” said Frankman, who scored 17 points. “I have pretty long arms, so that helps a lot.”

Ryan Beckstead chipped in with 12 points for the Pirates, who outscored the Dragons 37-18 in the second half. Both teams completely emptied their benches during the final half of the fourth quarter.

The Pirates made a big statement in a showdown between the third and fourth ranked teams in the latest 2A Coaches Poll. The No. 4 Dragons defeated top-ranked North Fremont, Bear Lake and Snake River, among other teams, during their aforementioned winning streak. It was North Fremont’s first loss of the season and Malad prevailed by 15 points.

“I just thought the kids played well,” coach Brown said. “They played hard and they won at home, which is what they’ve got to do. We can’t lose to Malad here and then have to go (to Malad) for the last game of the (regular) season) and try to beat them over there, which is going to be tough. ... But I thought our intensity was good, I thought we contested most (of Malad’s shots) and I thought we rebounded fairly well for the most part.”

Tom Simpson led the Dragons with 15 points, while Trevor Howe added 10. Howe, one of Malad’s talented guards, got into early foul trouble and ending up fouling out in the fourth quarter.