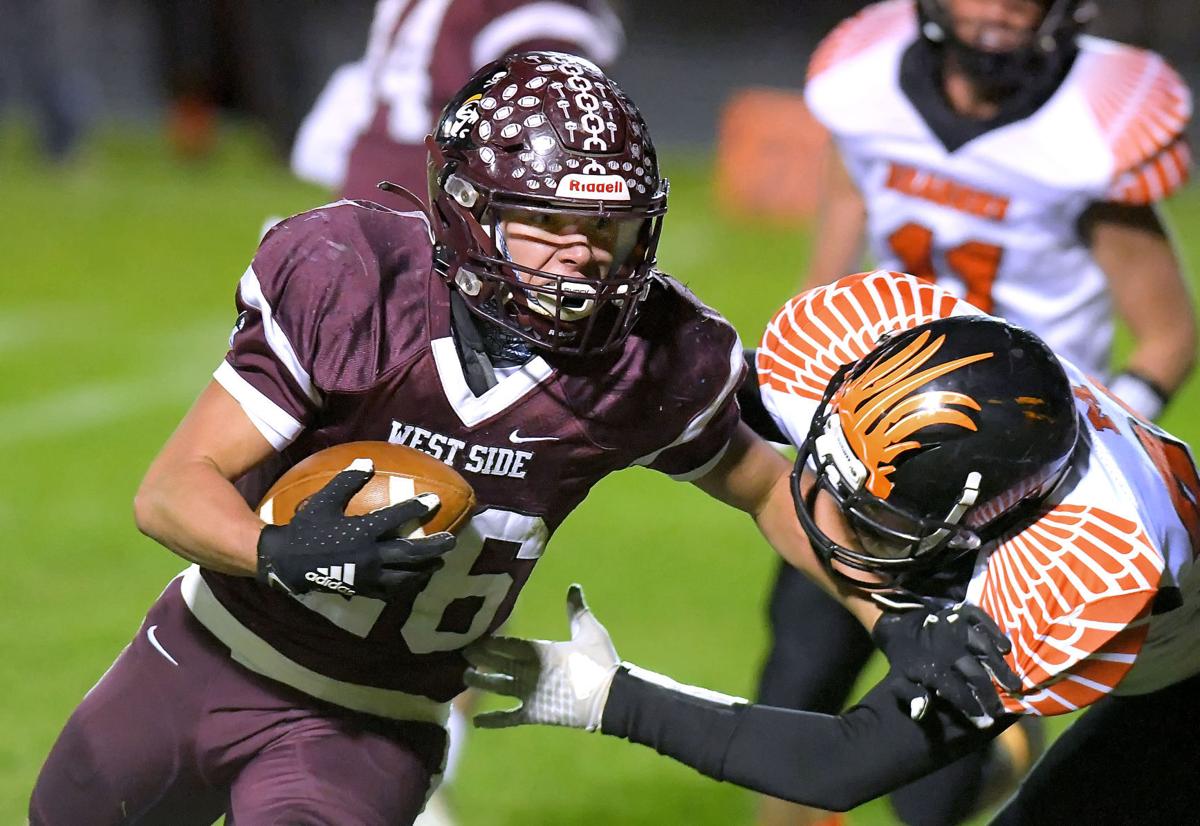 West Side running back Cage Brokens (26) carries the ball as Malad’s Tanner Olsen tries to make a tackle Thursday night in Dayton. Brokens had four touchdowns in the Pirates’ 45-20 win. 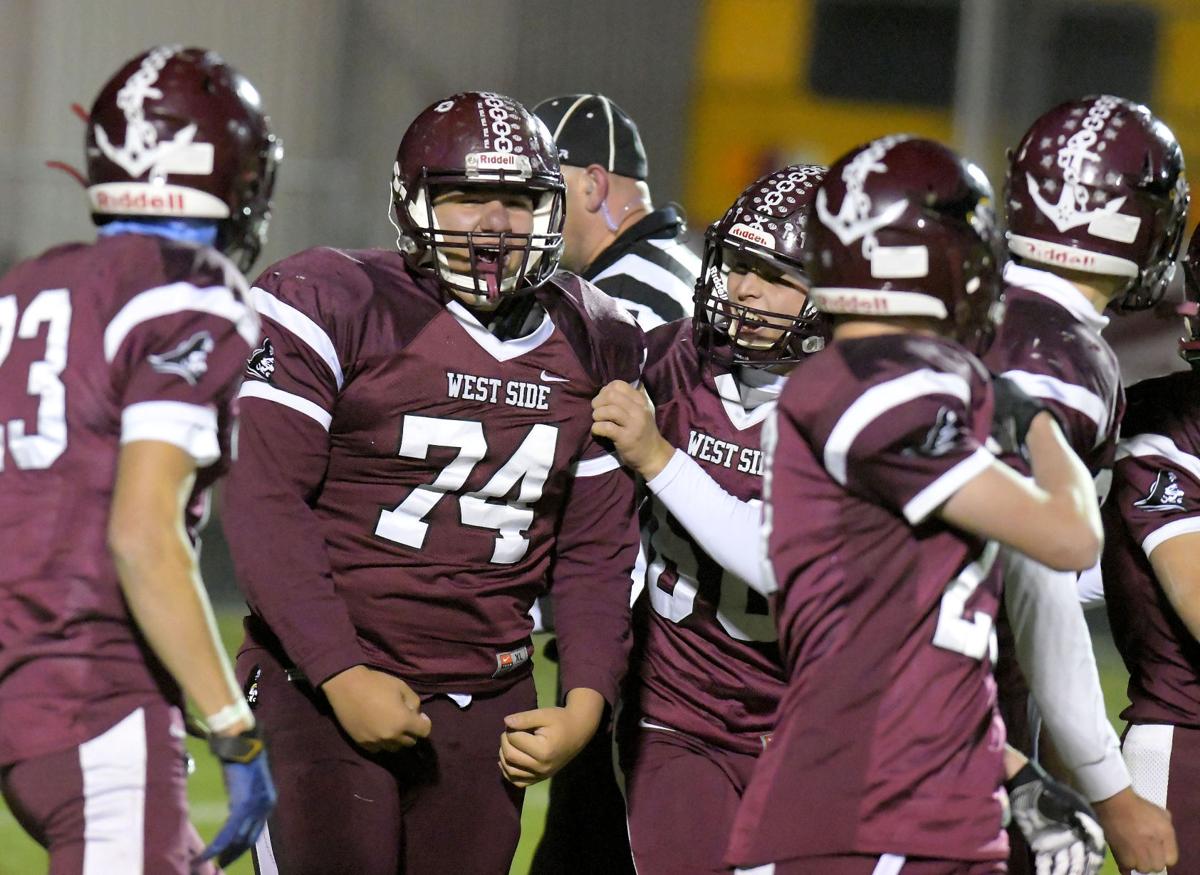 West Side defensive lineman Angel Montano (74) celebrates with teammates after intercepting a pass against Malad Thursday night in Dayton.

West Side running back Cage Brokens (26) carries the ball as Malad’s Tanner Olsen tries to make a tackle Thursday night in Dayton. Brokens had four touchdowns in the Pirates’ 45-20 win.

West Side defensive lineman Angel Montano (74) celebrates with teammates after intercepting a pass against Malad Thursday night in Dayton.

DAYTON — Three minutes into the game Thursday night at Lyle S. Henderson Field, the Pirates found themselves in a weird spot.

They trailed. West Side certainly hasn’t been in that position much lately.

The Pirates quickly righted the ship and scored 45 unanswered points on Senior Night. West Side capped off a perfect regular season with a 45-20 win against district rival Malad on a cold and sometimes windy night. It was the 17th straight win, dating back to last season, for the Pirates. They also captured their third straight district title.

“Malad did the same thing to us last year, took the ball and went down and scored first,” Pirate head coach Tyson Moser said. “I was happy with the way our kids responded.”

“Lately we have been giving up a score and then that kicks us into gear,” said Pirate running back Cage Brokens who rushed for two touchdowns and caught a pair of TD passes. “We got kicked into gear a little earlier than usual.”

There was a stretch in the second quarter where Brokens reached the end zone three straight times. He finished with a game-best 129 yards rushing on just 11 carries. The junior also caught three passes for 60 yards.

“I’ve caught that many passes, but I don’t think I’ve had that many yards this year,” Brokens said. “... There was some great blocks by the offensive line that got me going running the ball.”

Eleven different Pirates carried the ball Thursday night.Joshua Reeder had 59 yards on only two carries, while quarterback Blaize Brown rushed for 51 yards on nine attempts. West Side finished with 330 yards on the ground.

Brown showed he can pass as well, completing 6 of 9 attempts for 88 yards and three TDs. The starters sat part of the third quarter and all of the fourth. West Side finished with 425 yards of total offense.

Malad finished with 212 yards of total offense, but more than a 100 of that came against the Pirate reserves. Dragon quarterback Tom Simpson completed 10 of 31 attempts for 150 yards and three TDs. The signal caller also rushed for 46 yards on 16 carries. Traven Ward caught five passes for 88 yards and two scores.

“It’s always good when you can reward the kids that come out and practice all week and get them in the game,” Moser said. “We gave Malad some points, but that’s okay. It didn’t hurt anything. It was good to get them some experience.”

Defensively, Easton Henderson led the Pirates with eight tackles. Parker Henderson had five tackles, including a sack. Aaron Millburn also had a sack, forced a fumble and recovered a fumble. Taze Stegelmeir and Easton Shurtliff each had sacks as well. Defensive lineman Angel Montano came up with an interception.

“He (Montano) had a great game last week, which was kind of his come out game,” Moser said. “Tonight, he played great too. He had that interception and then read that screen perfectly. It’s always fun when D-linemen get interceptions.”

The 20 points were the most West Side has given up this season. In fact, in the seven previous games the Pirates had allowed a combined 28 points.

Malad took the opening kickoff and drove 77 yards in six plays. Simpson threw a perfect pass to Ward for a 30-yard score, leaving the Pirates trailing for the first time in weeks.

“That’s never the way you want to start a game, especially when you are used to shutting teams out,” Moser said. “The kids responded well. The defense adjusted a little, and the offense played well.”

Brokens broke free for a 42-yard gain on the ensuing West Side possession. He capped off a nine-play drive with a 3-yard TD run up the gut, and the score was knotted at 6-6 as both teams failed to convert extra-point plays.

A big sack by Parker Henderson forced the Dragons to punt. Brokens ripped off another long run, this time for 35 yards. Brown scored from a yard out, and the hosts were back where they are used to being — in the lead.

Early in the second quarter Montano reached up and picked off a pass near the line of scrimmage. The 280-pound lineman rumbled for 10 yards to the Malad 5. On the very next play Brokens caught a 5-yard TD strike from Brown.

Brokens was just heating up. On the next Pirate possession, he caught a short pass from Brown, weaved through some would-be tacklers and was gone for a 45-yard score to give West Side a 25-6 lead midway through the second quarter.

He lost a fumble in the red zone, but made amends on the next possession with a 10-yard scoring run up the middle where he powered his way across the goal line.

The junior lost a second fumble early in the third quarter at the goal line, which the Dragons recovered in the end zone. It looked like he may have crossed the line before losing the ball, but the officials ruled it a fumble.

“I did have a couple of fumbles and they were my fault,” Brokens said. “I had trouble holding onto the ball tonight. I’ll fix that.”

Bryler Shurtliff gave the hosts a 39-6 lead at the break after catching a 7-yard pass from Brown with 49 ticks left on the clock before halftime.

With mostly reserves in the game, the Pirates scored early in the fourth quarter when Easton Shurtliff went up the middle for a 8-yard TD.

The Dragons scored twice in the final period.

West Side will have next week off, then start the state playoffs.

“We’ve had trouble playing well in back-to-back weeks,” Brokens said. “One week we play really well, then we don’t. Hopefully we can come back strong from the bye. I’m just glad I can be a part of another district championship.”

West Side will be looking to repeat as 2A state champs.

“We’re doing well, but we’ve got to get healthy,” Moser said. “We’ve got some kids dinged up. We can use the bye to get better and fix a few things.”