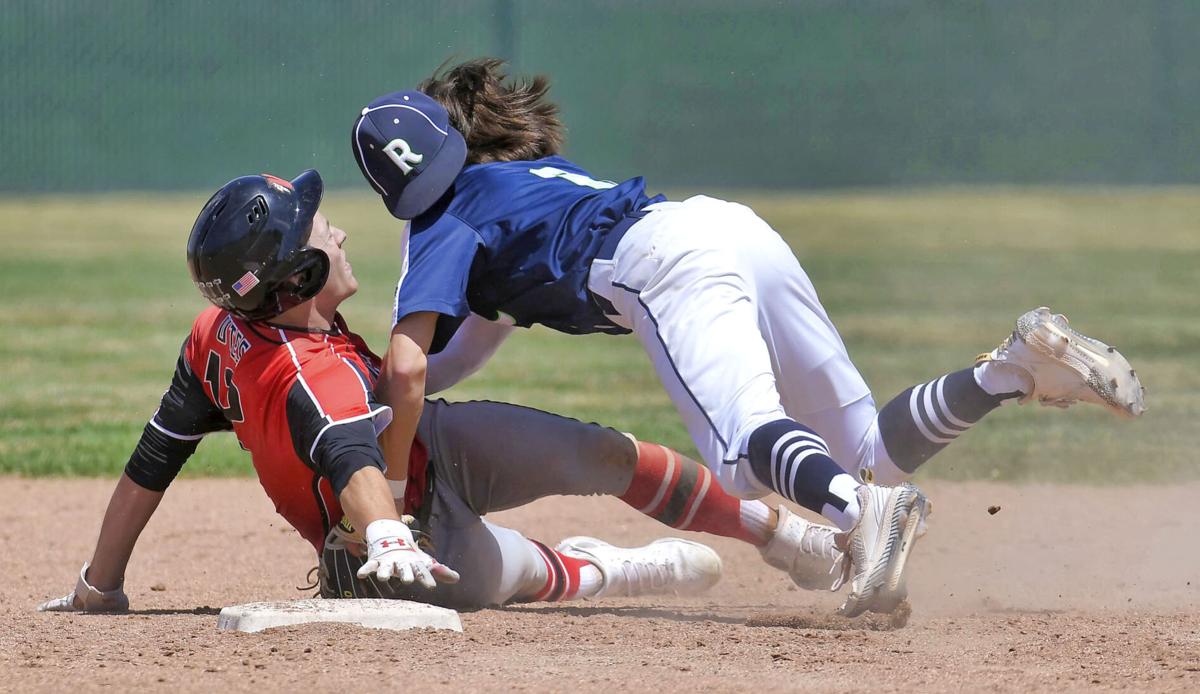 Ridgeline’s Jaxen Hollingsworth tags out Uintah’s Daniel Wright at second base on Friday in Millville. 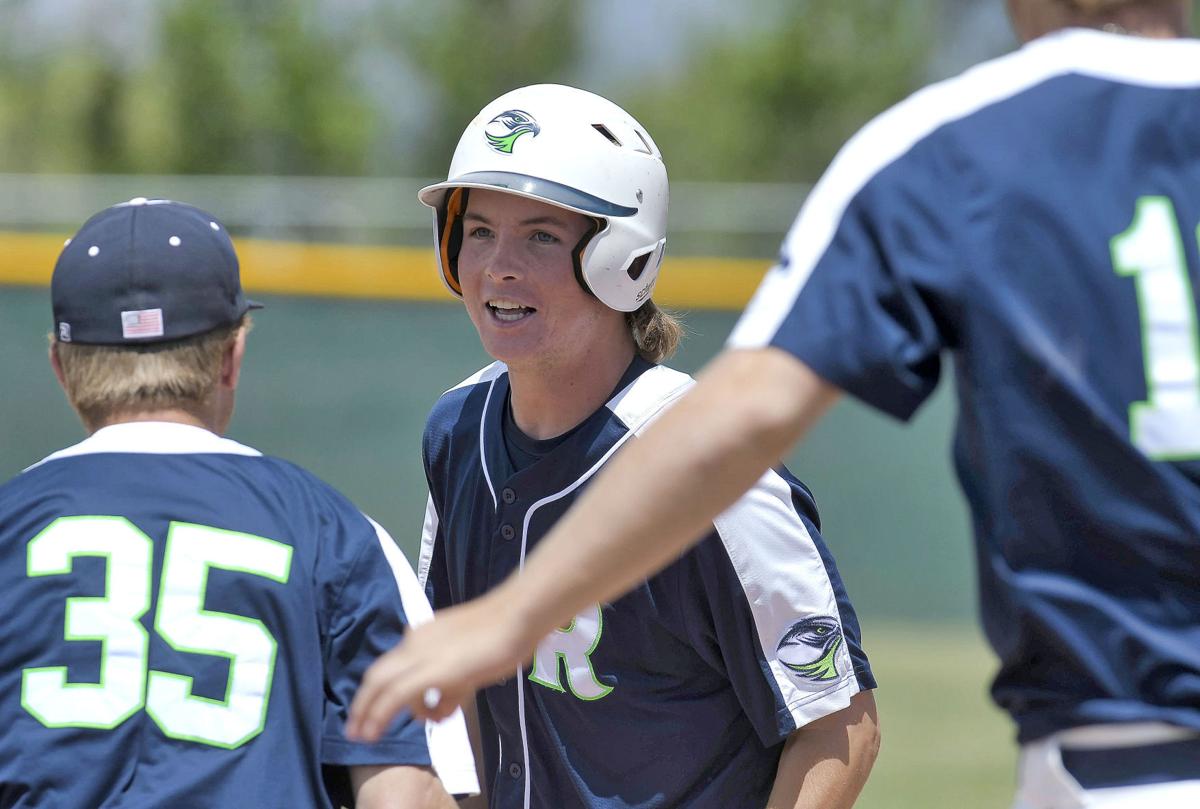 Ridgeline's Evan Webb, center, celebrates with teammates after hitting the game winning RBI against Uintah on Friday in Millville.

Ridgeline’s Jaxen Hollingsworth tags out Uintah’s Daniel Wright at second base on Friday in Millville.

Ridgeline's Evan Webb, center, celebrates with teammates after hitting the game winning RBI against Uintah on Friday in Millville.

MILLVILLE — It took a few extra innings, but the Riverhawks are not complaining.

Ridgeline withstood some tense moments Friday on the second day of the super regional round of the 4A state baseball playoffs. After getting blown out Thursday, Uintah bounced back and hung with the Riverhawks in the second game of the best-of-three series.

In the end, the Riverhawks completed the sweep with some clutch hits in the bottom of the ninth for a 5-4 win as birthday boy Braxton Gill scored the game-winning run.

“I was not thinking about it (birthday); it was just another day,” said Gill, who received a cake and was sung to by his team after the game. “... I just tried to play my game and run as fast I can. I just let the other guys do their job.”

Gill certainly did his job as the lead-off batter for the Riverhawks (19-7) Friday. The senior got on base four times — two hits and two walks — and scored every time. Obviously, his teammates helped move him around the bases.

“I did my job for sure,” Gill said. “I was just trying to get my pitch every time.”

Knotted at 4-4, the Riverhawks got a boost when Carter Gill led off the bottom of the ninth with a single to left.

“Carter’s lead off hit was huge,” said Ridgeline head coach Paul Bowler, who took a line drive foul ball to the thigh from his catcher. “... We tell them they have to wear that when a ball comes at them in the box, but that hurts.”

Braxton Gill then laid down a perfect bunt and reached first safely. A bunt by Jaxen Hollingsworth led to a fielder’s choice and out at third. However, the Riverhawks juiced the bags when Jaden Harris drew a base on balls.

“I was expecting a fastball there when it got to 3-1,” Harris said. “But he threw a curve ball, didn’t want me to hit another fast ball. I got on base and that’s all you can do.”

Evan Webb took a 0-1 pitch and blooped it over the second baseman and into right center field for the game-winning hit, scoring Braxton Gill.

“I was just trying to score a run, hit it anywhere,” Webb said. “I was just thinking about the at-bat as any other one. You don’t want to over think it. ... I knew when I hit it that it was going to drop. That was fun.”

Webb was mobbed by his teammates.

Just to get to the ninth, the Riverhawks had to rally. The Utes (12-12) plated a run in the top of the eighth to break the tie. A lead-off double by Gage Murray got the visitors going. However, two outs followed. Morgan Mansfield singled to left to put Uintah in front.

In the bottom of the eighth, Davis Fullmer walked and Kole Jenson was hit by a pitch. With two outs, Marshall Hansen smacked a single that dropped in on the right field line, scoring Jenson. Miles Eck, who had ground into a fielder’s choice, was thrown out at home as the Riverhawks tried to end the game in the eighth.

Ridgeline escaped a jam in the top of the ninth. With the bases loaded, pitcher Tanner Bernhardt enticed a pop up to second base. The Utes left the bags full twice in the game.

“That was a real baseball game today, nine innings,” Bowler said. “That was a much better game to watch and to play in than yesterday (17-2 in five innings), especially when you come out on the winning side. That was pretty good baseball today.”

The Riverhawks finished with eight hits and one error, while Uintah had five hits and two errors. Cam Bott started the game for Ridgeline on the mound, striking out six batters in 3.1 innings of work and allowing just one hit. He did walk three and hit a batter.

“He (Bott) was lights out there for a while,” Bowler said. “He was deep enough into the game that we could make a change. He is a fantastic pitcher.”

Uintah scored three runs in the fourth on just one hit as Aidan Baltrum recorded the first base knock. Four walks — two with the bases full — and the lone Riverhawk error helped the Utes surge in front, 3-2.

Bernhardt came on and finished the game, striking out five and walking five.

Harris and Braxton Gill both had two hits for the hosts. Harris began the game with an RBI double in the first and then an RBI triple in the third. Both times he hit the ball over the center fielder’s head, bringing Braxton Gill home.

“Lately my first couple of at bats haven’t been very good, but today I had a couple of good at bats early,” Harris said. “I knew they were going to come at me with curve balls and I tried to leave those alone. I was able to hit a couple of fast balls hard. There is always momentum when guys get on base in front of me, and it puts pressure on the pitcher.”

“I’m ready to score when he (Harris) is up to bat,” Braxton Gill said.

In the fifth, Braxton Gill earned a walk and Harris reached on a error. A throwing error by the Utes when Harris attempted to steal second made it possible for Braxton Gill to score and tie the game at 3-3.

Neither team threatened to score in the sixth or seventh innings, setting up the thrilling finish.

With the win, Ridgeline moves on to championship rounds at Salt Lake Community College, beginning Monday. The Riverhawks, who are among the eight remaining teams alive in the state tournament, will face Pine View at 7 p.m. It is double elimination.

“We’re excited,” Bowler said. “They have earned it.”

Sky View and Green Canyon were in action at St. George on Friday, but didn’t fare well and saw their respective seasons come to an end. After beating Dixie on Thursday, 3-2, the Wolves suffered two setbacks against the Flyers on Friday, 8-2 and 9-2. The Bobcats could not slow down Pine View, losing in five, 17-5.

Green Canyon 15-13) scored first in the opening game with a run in the third, but the Panthers Flyers (15-11) answered with three in the bottom of the frame and led the rest of the way.

The Wolves had eight hits as Alex Atkinson, Reece Hansen and Ryker Ericson had two each. Atkinson had a double. Two Green Canyon pitchers combined to walk six and strike out four.

In the second game, Dixie broke open the game with four runs in the second. The Wolves were held to just five singles. Three pitchers were used by Green Canyon as they walked four and hit three.

Just like they did on Thursday, the Panthers (18-5) came out swinging as they had a double, four triples and a home run. Pine View scored five runs in the first and third innings. They put it away with six in the fourth.

However, the Bobcats (10-16) did play to the end. They plated all five of their runs in the top of the fifth. Cole Watterson had two hits, two RBIs and a double. Stetsen Karren had a two-run double.