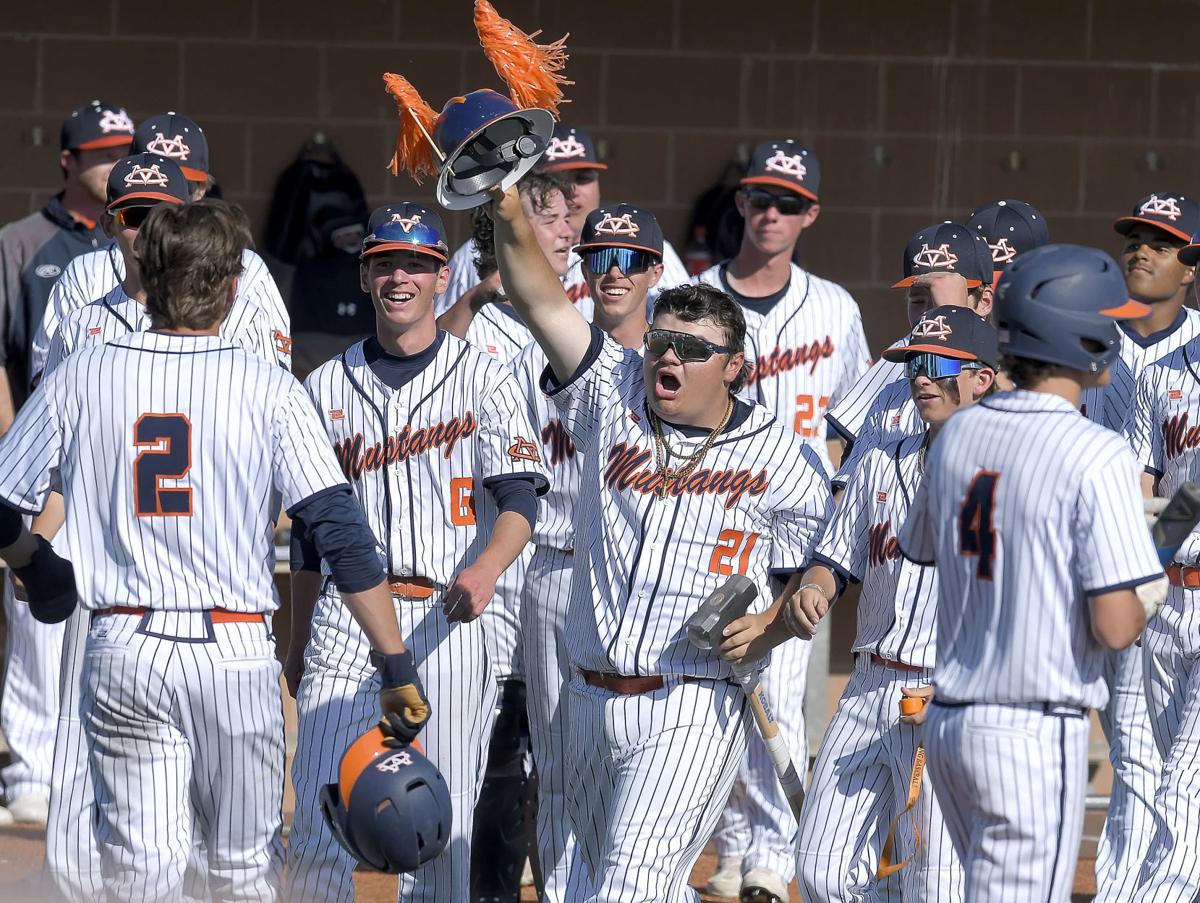 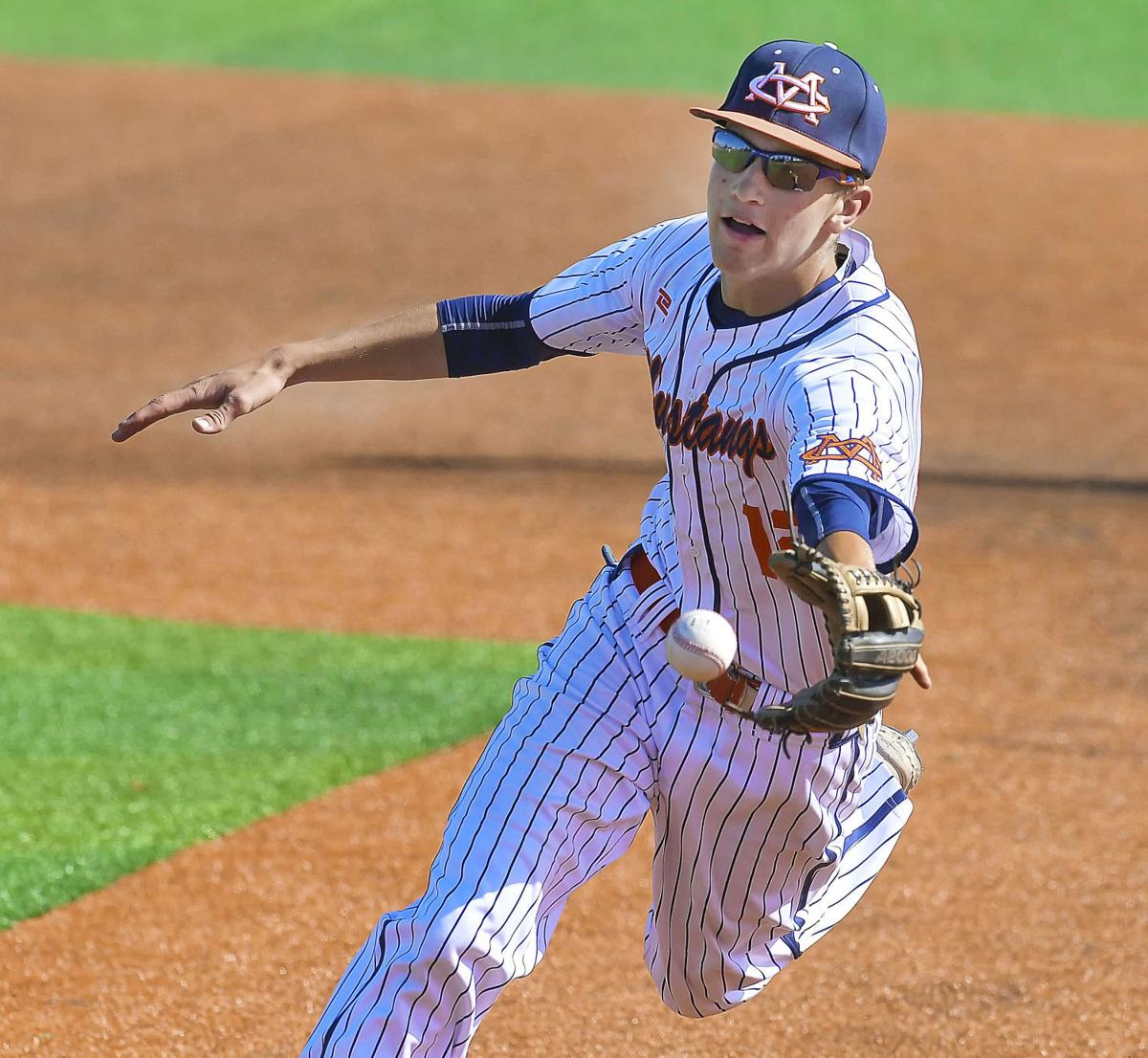 Mountain Crest's Nathan Rowley flips the ball to first base to force out a Bear River runner on Tuesday in West Jordan at the 4A state playoffs. The Mustangs beat the Bears, 9-8.

Mountain Crest's Nathan Rowley flips the ball to first base to force out a Bear River runner on Tuesday in West Jordan at the 4A state playoffs. The Mustangs beat the Bears, 9-8.

The Mustangs didn’t have to sweat it out this time around.

Instead, Mountain Crest’s baseball team put together arguably its best performance of the season and is now two wins away from capturing its third 4A state championship. The fifth-seeded Mustangs blew out top-seeded Desert Hills 13-0 in five innings on Wednesday at Salt Lake Community College and punched its ticket to the tournament’s championship series, which will take place Friday and Saturday.

The Mustangs (23-7), who won their previous two games by a single run, jumped out to a 5-0 lead after three innings and essentially slammed by putting an eight-spot on the scoreboard in the top of the fifth. Two-run doubles by Kolmyn Foulger and Lance Welch highlighted Mountain Crest’s massive fifth inning.

“We came out ready and focused to play,” MC head coach Stephen Hansen said. “Jaden Jones came out and threw a gem. We hit the ball around and scored a bunch of runs. This group has worked hard and deserves everything that they are getting.”

Indeed, Jones was outstanding on the mound for the Mustangs. The senior threw a five-inning shutout for Mountain Crest and limited a potent Desert Hills lineup to a pair of singles. Jones, who has been the team’s No. 3 or 4 pitcher this spring, struck out two and walked two.

“It feels really good, but I couldn’t have done it without my teammates,” Jones said. “They kept the momentum going and made my job easy.”

Seven different Mustangs combined for 12 hits against four different Thunder pitchers. Dax Roundy had another big day at the plate for Mountain Crest as he went 3 for 3 with two RBIs and a run, plus he was hit by a pitch.

It was sweet revenge for Mountain Crest, which lost to Desert Hills 11-1 in six innings back on March 20.

“When we played them earlier in the season, we weren’t playing our best baseball and we all knew that,” Jones said. “I’ve been wanting to face them all year and we did, and took advantage of it.”

Mountain Crest will square off against either No. 2 Snow Canyon (26-4) in the best-of-three championship series. Game 1 will be Friday at 4 p.m. at SLCC.

Ridgeline’s season came to an end with a 6-3 loss to Dixie (17-12) on Wednesday afternoon. The sixth-seeded Riverhawks (20-9) and Region 11 rival Bear River tied for fifth place in the tournament.

The Flyers took a 4-0 lead over the Riverhawks, who pared their deficit in half in the bottom of the fourth. Davis Fullmer launched a solo home run over the left field fence to get the Region 11 champions on the board.

Ridgeline manufactured a run in the fifth frame to pull to within 4-3 and had a chance to apply even more pressure on Dixie, but left the bases loaded. The Riverhawks were unable to score with the bases juiced and one out in the sixth inning.

Davis also singled for the Riverhawks, who got two hits and a run from Kole Jenson, plus one hit and one RBI from Jaden Harris. Miles Eck doubled in the sixth for Ridgeline, which finished with eight hits to the Flyers’ 10.

"We had a great season and made a good run at state, but came up a little short," RHS head coach Paul Bowler said. "All eight teams that were left are really good teams and it has been some really exciting baseball. When you get down to the final games like that, one or two plays or pitches can make the difference in the outcome of the game. We didn't make a couple of those plays at the right times that could have made that difference.

"I'm really proud of our guys and the way they came together this year and battled their way to the Region 11 title."

Later in the day, Dixie was eliminated from the tourney by No. 2 Snow Canyon by a 3-1 scoreline. Like Mountain Crest, Snow Canyon has not lost a game in this tournament.