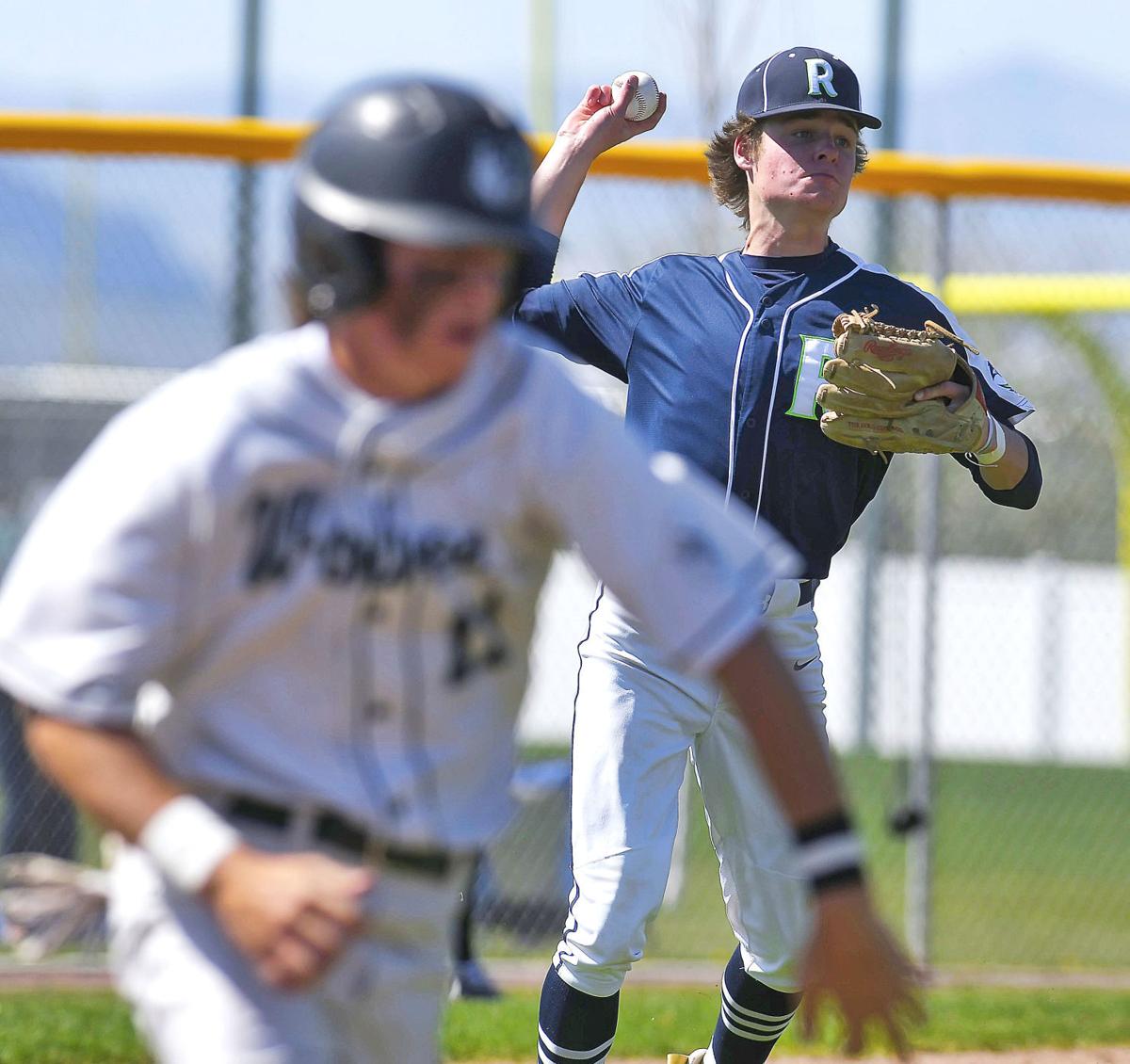 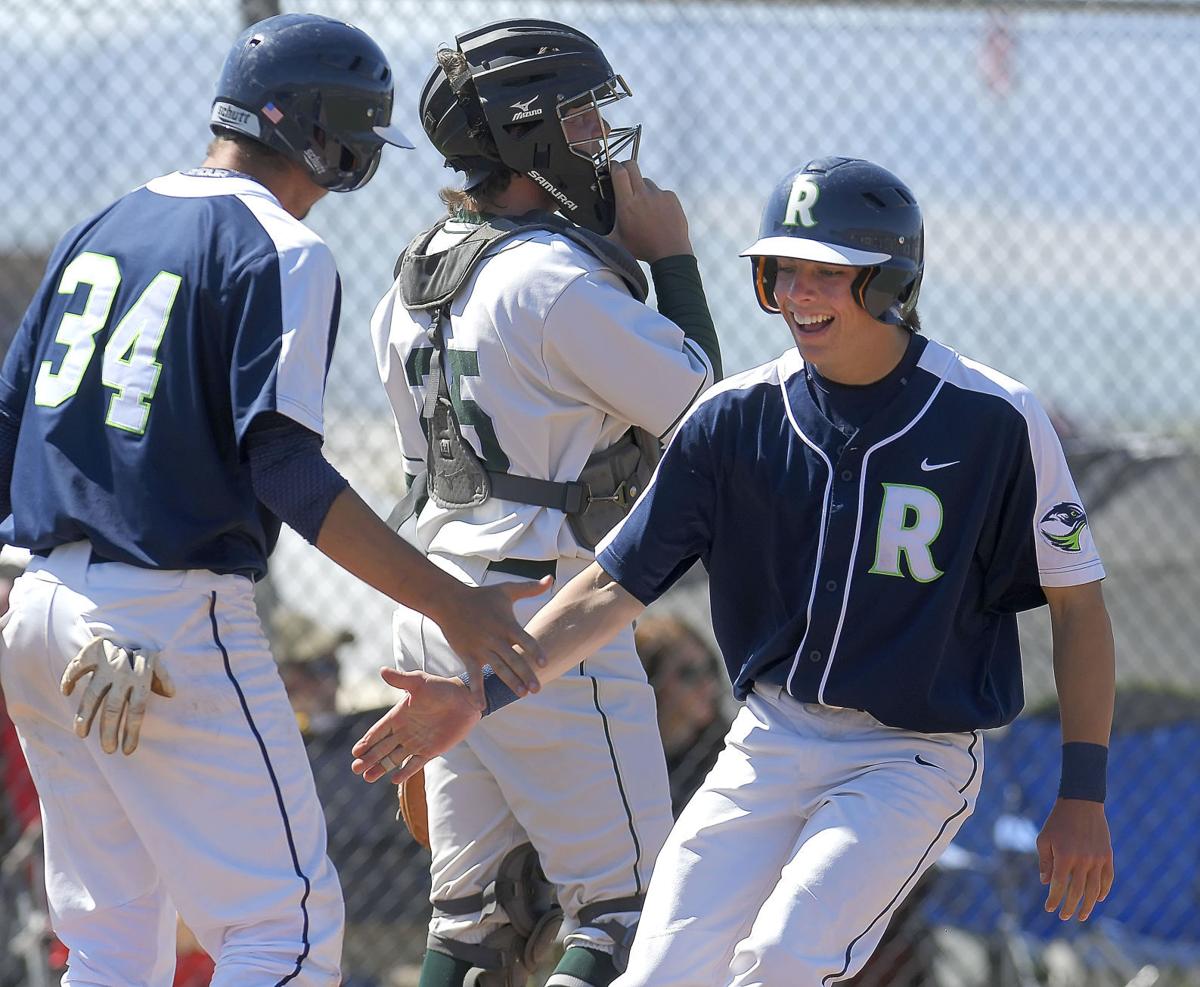 Ridgeline's Jaxon Hollingsworth, right, celebrates with Braxton Gill after scoring a run against Green Canyon on Thursday in North Logan.

Ridgeline's Jaxon Hollingsworth, right, celebrates with Braxton Gill after scoring a run against Green Canyon on Thursday in North Logan.

NORTH LOGAN — Having already locked up the Region 11 baseball title on Wednesday, the Riverhawks were playing for pride and to keep the momentum going in the right direction as the state tournament begins next week.

Consider that accomplished on Thursday.

Green Canyon did not go down without a fight and held the lead after two innings. But Ridgeline once again had the bats working throughout its lineup. The Riverhawks completed the sweep of the Wolves with a 15-7 victory.

“We just kept reminding them what was at stake,” Ridgeline head coach Paul Bowler said. “We wanted to come out and make sure there were no doubts who the region champs are. They played really well. I was happy. You worry about a let down after yesterday, but they came to play. I was proud of them.”

“We came out with a really good approach and picked good pitches to hit and laid off the bad ones,” Bowler said. “You are going to have good offensive games when you do that. We have struggled at times doing that. I think we are getting that figured out.”

It was a downer for the Wolves (14-11, 6-9), who honored their seniors before and after the game. The hosts kept fighting, pushing the game to the full seven innings after getting down by 11 in the top of the sixth.

The game lasted more than three hours as the teams combined for 30 hits, nine walks, six errors and three hit batters. Each team used three pitchers in the marathon game.

“That’s the longest game we’ve had in a while,” Bowler said.

Miles Eck had three hits to lead the Ridgeline batters. He also scored twice and had two RBI.

“It was good to see Miles get out of funk he has been in,” Bowler said.

Braxton Gill, Jaden Harris, Kole Jenson, Marshall Hansen and Carter Gill each had two hits for the Riverhawks, who finished with 16 for the game. Harris and Davis Fullmer each had three RBI. Ridgeline finished with four doubles and a triple by Braxton Gill.

“Davis has come up huge for us lately with big hits,” Bowler said.

Caleb Petersen led the Wolves with four hits and also drew a base on balls. Reece Hansen had three base knocks, including a double and also earned a base via a walk. Alex Atkinson and Ryker Ericson each had two hits as Green Canyon had 14 as a team.

The Wolves did not help themselves with four errors, while the Riverhawks had two.

Ridgeline began the scoring with a two-run double from Fullmer with two outs in the top of the first. Green Canyon responded with a pair of runs in the bottom of the first, filling the bags and scoring its first run off an error. Traceson Jensen then hit an RBI sacrifice fly to center to knot the game at 2-2.

With the four runs in the first inning, the game was off and running.

The Wolves took their lone lead in the bottom of the second, 3-2. With two outs, Reece Hansen smacked an RBI single up the middle to score Atkinson, who had singled and stole second.

The Riverhawks recaptured the lead in the top of the third. With the bases loaded, Eck hit an RBI single to left to tie the game. Marshall Hansen hit a ground ball that turned into an error, allowing Evan Webb to score. Ridgeline would lead the rest of the way.

After scoring eight runs in the top of the sixth — highlighted by a three-run double by Harris — Ridgeline took a 15-4 lead.

Green Canyon did not roll over, but went out in the bottom of the sixth and scored three runs to send the game to the seventh frame. RBI singles by Caden Stuart and Carson Proctor guaranteed another inning. Atkinson added another run with an RBI ground out when the bags were full.

The scoring was done, but both teams left the bases loaded in the seventh.

Jakob Astle pitched the first four innings for Ridgeline to get the win as he allowed eight hits, struck out one and issued four walks. Reece Hansen took the loss, despite striking out six in five innings of work for Green Canyon and walking just one. He did give up 11 hits.

With the regular season wrapped up, teams turn their attention to the state tournament, which begins on Monday when the lowest nine teams in the RPI battle for four spots to join the top 12 teams. The 16 teams left will then be seeded according to RPI and play a three-game series next Thursday and Friday in eight different home sites.

At Smithfield, Logan (5-19, 2-13) trailed 2-0 going into the top of the fifth. The Grizzlies were able to take the lead with three runs and remained in front the rest of the way. The visitors also scored a pair of runs in the sixth and seventh to secure the victory and avoid being swept by the Bobcats (9-14, 7-8).

Vincent Rohrer had four of the Grizzlies 11 hits. Kellen Roper and Alex Davies each had two hits. Logan stranded 10 base runners in the game.

Jaxon Arthur struck out six and walked seven in five innings of work for the win. Jack Fjeldsted pitched the final two frames for the save.

Sky View had just five hits as Taydem Neal had two of them, including a double. Derek Anthony had a hit, two RBI and drew two walks. Cole Watterson took the lose on the mound, throwing six innings, striking out four and walking four.

Easton Lish led the hosts in hits with three, as Hunter Smoot and Tadem Marble each had two hits. Marble went the distance on the mound, striking out five and walking one for the win.

The Mustangs (18-7, 10-5) used three pitchers, who combined to strike out one and hit two batters. No walks were issued. Dax Roundy had two of the Mountain Crest hits.

It was a wild finish in Preston Thursday afternoon as the hosts were able to rally for a 9-8 win over district rival Century and create a three-way tie atop the league standings. It was the second win over Century this season for Preston.

The Indians (12-10) trailed by a run going to the bottom of the seventh against the Diamondbacks (13-5). After a ground out, Vanessa Griffeth doubled to left field. With two outs, Charly Bair drew a walk. Griffeth scored on a RBI single from Kendall Keller to tie the game up. Dru Despain then reached base via a base on balls to juice the bags with two outs. Shandee Parker hit a fly ball that was dropped, allowing Bair to score the winning run.

It was the only error of the game by Century.

Megan Johnson, Bair and Keller each had two hits. Bair scored twice, had three RBI and drew two walks in the game. Bair also got the win in the circle, going the distance and striking out three and walking three. Preston overcame striking out 10 times.

“Our team is so united and anyone on the team can hit at any given moment,” Preston coach Larry Morrison told the Idaho State Journal. “I feel like this week with two huge wins over two great conference teams puts us mentally in such a great spot going into the tournament we are really confident in ourselves.”