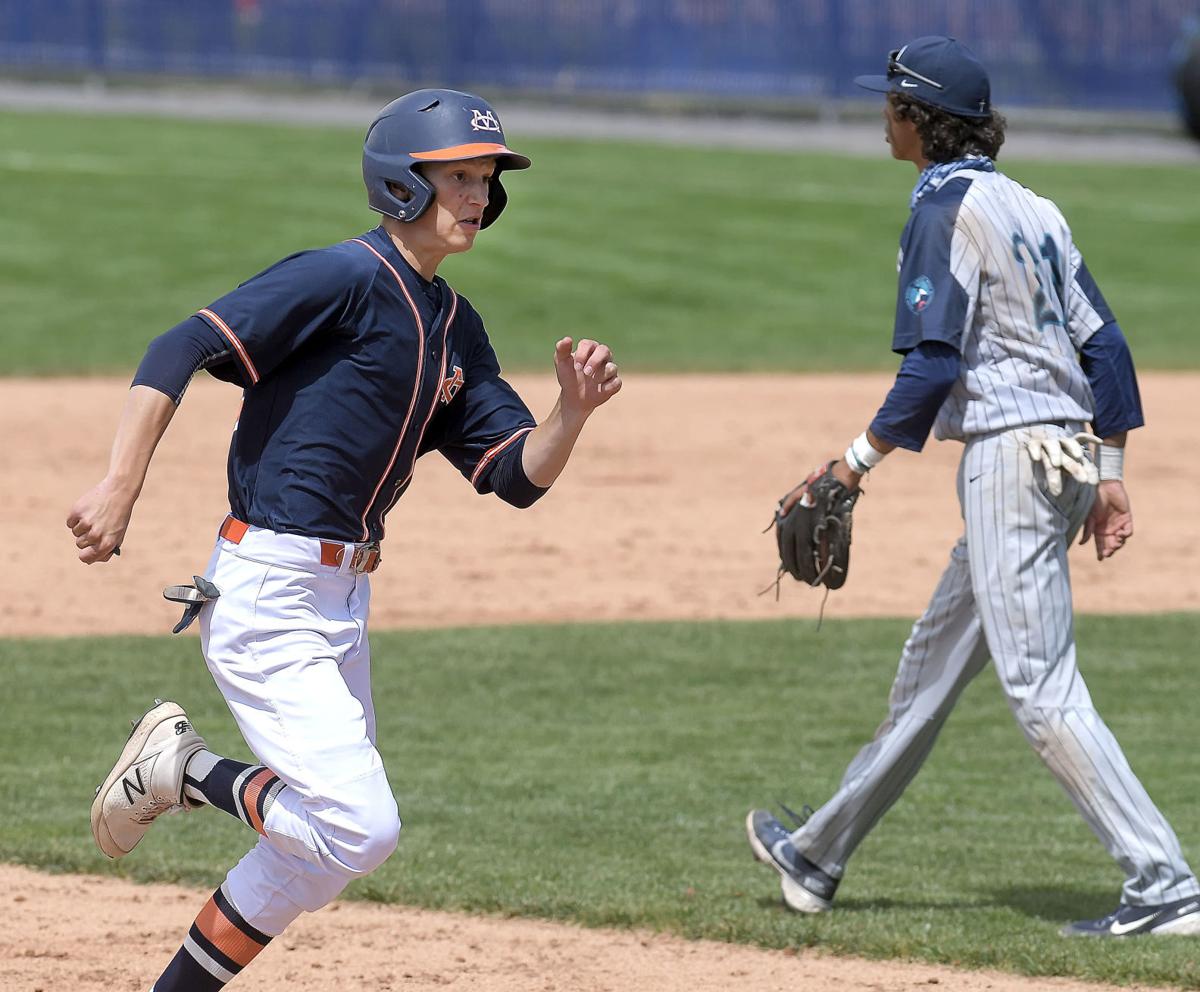 Mountain Crest’s Nathan Rowley runs to third base for a two RBI triple against Juan Diego on Friday on Hyrum. 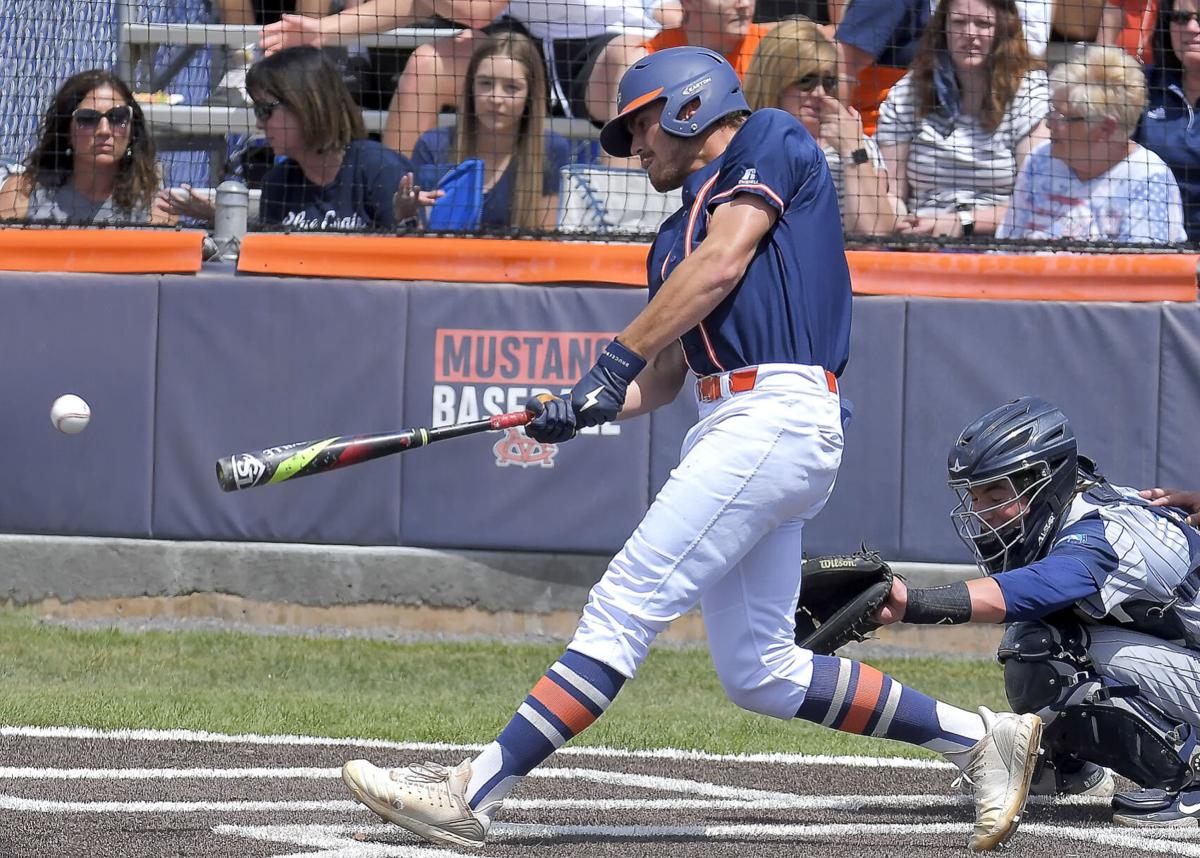 Mountain Crest’s Nathan Rowley runs to third base for a two RBI triple against Juan Diego on Friday on Hyrum.

HYRUM — Missed opportunities with runners on base has been a problem at times for Mountain Crest’s baseball team this season.

It appeared that trend might continue when the Mustangs left the bases juiced in the bottom of the second in their most recent playoff game, but then the floodgates opened.

Lance Welch was rock solid on the mound and Mountain Crest exploded for 10 runs in the fourth and fifth frames en route to a 11-1 victory over Juan Diego via the mercy rule in the super regional round of the 4A state playoffs on Friday afternoon at The Yard.

The fifth-seeded Mustangs (20-7) manufactured a run in the bottom of the seventh to edge the 12th-seeded Soaring Eagles (13-14) 1-0 in Thursday’s best-of-three series opener. There was no drama this time around as the Mustangs are one of eight teams who will compete in the double elimination portion of the tournament, which starts Monday.

“I just feel like today we were a little bit more ready than we were yesterday,” MC junior Nathan Rowley said. “We were (also) attacking good pitches and seeing a lot of pitches today.”

Indeed, the Mustangs did a great job of being patient in the batter’s box Friday, plus they put a lot of pressure on Juan Diego’s infield. The Mustangs hit a couple of groundballs that would have brought in runs regardless, but the Soaring Eagle gave the hosts extra outs with throwing errors.

Preston Jones also laid down a nice sacrifice bunt for the Mustangs, advancing two into scoring position, plus Welch was able to reach base on a bunt single.

“We’ve been working on that and we haven’t been scoring a lot of runs lately, so we have to put down some bunts and put pressure on the defense that way, and it worked out (today),” MC head coach Stephen Hansen said.

“And then we finally relaxed a little bit and got some base hits with some runners on, and hopefully that’s going to carry over to next week.”

Additionally, the Mustangs were able to get some run support for Welch this time around. The southpaw threw a complete-game five-hit shutout in his last outing, a narrow 1-0 triumph over Bear River last Wednesday. However, Welch and the Mustangs didn’t have to sweat it out Friday.

“It’s kind of nice, but you never really think about it too much,” said Welch, who limited Juan Diego to a pair of singles, struck out four, walked two and plunked one. “You always have to play like it’s a tie game and you have to keep (the opposition) at zero.”

Matthew Lebrecht fouled off four straight two-strikes pitches to lead off the top of the fifth for the visitors. Nevertheless, Welch was able to win the battle and get the strikeout. That particular at-bat exemplified what kind of day it was for Welch and the Mustangs.

“Well, you know Lance is always going to be around the zone and he’s going to throw strikes, and Lance has been doing that for us now for four years, three-and-a-half years,” said Hansen, who made it a point to praise his assistant coaches for doing a “fantastic job” this spring. “... And he threw another good game for us today.”

Mountain Crest scored six times in four hits, two Juan Diego errors and a hit batsman in the bottom of the fourth to take control. Rowley came through with a two-run triple over the right fielder’s head.

The Mustangs put a four-spot on the scoreboard in the home half of the fifth to slam the door. A two-run single by Kolmyn Fougler allowed Mountain Crest’s lead to balloon to 9-1, Braydon Schiess drove in Fougler on a triple and Schiess crossed home plate on Dax Roundy’s walk-off single in the 3-4 hole.

Juan Diego scored its lone run in the fifth inning.

Fougler contributed with three RBIs and two runs for the Mustangs, who got two runs from Schiess and Welch, plus two RBIs from Roundy. Fougler had the game-winning single in the series opener.

Up next for Mountain Crest is No. 4 Stansbury, which swept Region 11 rival Cedar Valley in two one-sided scorelines. The two teams will square off Monday at 11 a.m. Salt Lake Community College. The Mustangs beat the Stallions (22-5) in their season opener, 11-9, on March 10.